Billed as the first peacetime Colombian election in more than half a century, the presidential run-off on 17 June has become a referendum on peace itself, or at least on whether the sluggishly implemented 2016 accords that officially ended 52 years of conflict between the state and Revolutionary Armed Forces of Colombia (FARC) guerrillas require another look.

Colombians face a stark choice: vote in a former leftist guerrilla whom critics compare to Venezuela’s late Hugo Chávez, or plump for a right-wing populist who threatens to overhaul the peace deal that ended the longest-running conflict in the Western Hemisphere.

Iván Duque, the candidate of the right-wing Democratic Centre party, is expected to prevail and become, at just 41 years old, Colombia’s youngest-ever president. Duque was the clear winner of the 27 May first-round vote and has since opened up a significant opinion poll lead over former Bogotá mayor Gustavo Petro, the 58-year-old leader of the left-wing Humane Colombia movement.

“The FARC got a better deal than their victims, and I’m the one who will right this injustice,” Duque, a former senator, told IRIN at a campaign rally at a Bogotá amusement park in May. But despite his tough talk on the deal, experts say it’s unlikely he will seek to tear up the accords entirely. Petro, on the other hand, has vowed to safeguard the FARC agreement and focused his campaign on fighting inequality and reining in Colombia’s elite.

Tomás Ayuso/IRIN
Tomás Ayuso/IRIN
Duque delivers a fiery speech, condemning the peace accord as appeasement towards the FARC and characterising the former guerrillas as duplicitous killers taking advantage of a weak government.

Meanwhile, the influx of one million Venezuelans since their country’s economy began melting down in 2015 has landed a new displacement crisis on Colombia’s doorstep; even as the country struggles to assist more than 6.5 million internally displaced people of its own (second globally only to Syria) and deal with the bitter legacies of more than five decades of conflict.

Other issues are festering too – the election comes as the government is negotiating with the smaller National Liberation Army (ELN) guerrilla group, while also attempting to achieve the surrender and disarmament of Colombia’s biggest crime/drug trafficking syndicate, the Gaitán Self-Defence Forces. 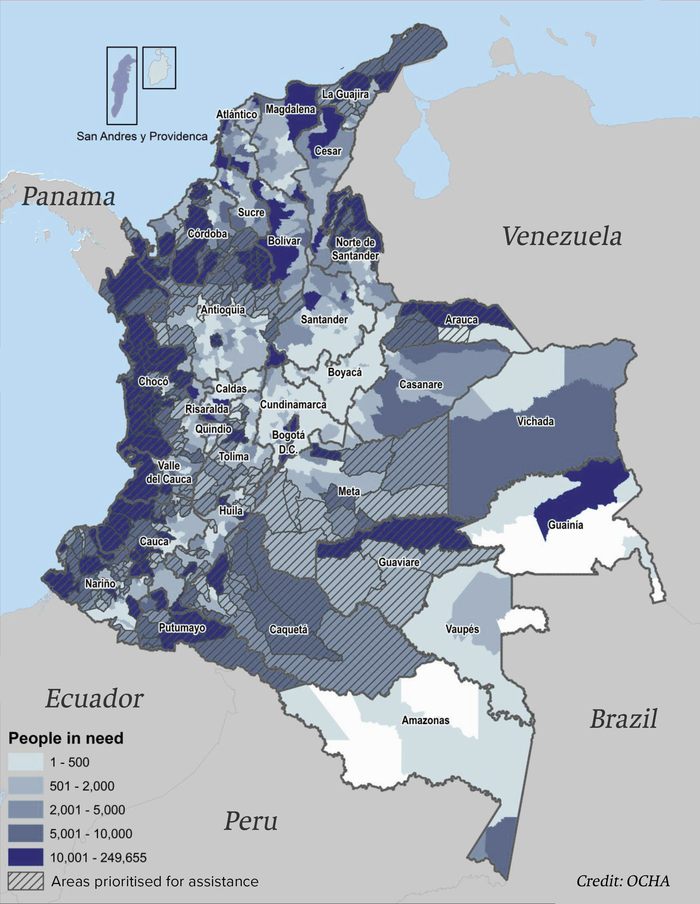 Eighteen months after President Juan Manuel Santos forced the FARC peace accords into law – defying the razor-thin majority that had unexpectedly voted against an earlier version in a referendum – Colombia still finds itself polarised over what compromises are acceptable to end a conflict that cost more than 220,000 lives and left more than eight and a half million registered victims.

Duque is seen as the heir to 65-year-old former president Álvaro Uribe, a vigorous opponent of the peace accords who is still beloved by many on the right for the hard line he took against the FARC during eight years in power between 2002 and 2010.

The deal has not put an end to violence, as other armed groups and criminal gangs, including the ELN, vie for control over former FARC business and territory. A total of 487,129 people were forced to leave their homes between January 2015 and December 2017, and more than 10 percent of Colombians (4.9 million) are in need of assistance, according to the UN’s emergency aid coordination body, OCHA.

Since 2016, the FARC, now a political party bearing the same name, has followed through on its end of the deal: demobilising 7,000 combatants, relinquishing 9,000 weapons, handing over assets, and decamping former guerrillas into two dozen specific areas around the country to be retrained and reintegrated.

However, according to the International Commission on Human Rights Verification watchdog group, the government has only complied with 18.5 percent of the reforms, laws, and promises it made in the agreement. These include everything from economic reparations and security guarantees to land and housing reforms, development aid, and assistance for farmers who signed up to end coca production.

“The old parties – the political organisations of the mainstay politicians like Uribe and Santos – actively block change… to benefit cronies in the private sector, and nothing ever gets done,” said Diana Sánchez, director of Somos Defensores, an organisation that seeks to protect human rights defenders from persecution and assassination.

For Sánchez, this inaction helps explain Petro’s popularity in departments like Nariño, Putumayo, Cauca, and Chocó, where new armed groups have risen from the ashes of the FARC, fighting for the illicit rents and profits on lucrative drug trafficking routes and clandestine mining sites relinquished by the guerrillas. Here, commitment to the accords is seen as critical. “People in the regions that suffered through the war see Petro as the sole leader with a mandate towards peace,” Sánchez said, arguing that Duque’s hardline approach appeals more in areas that never bore the brunt of the conflict.

But at the Duque event in May, victims of the FARC, most of whom were bussed in to Bogotá from across the country, rallied around the candidate’s plan to make right what they see as an ill-advised deal between the former guerrillas and President Santos. The rapturous crowd erupted in bouts of raucous applause as Duque delivered a firebrand speech, vowing to “bring justice to their victimisers” and pledging to “punish those who left families fractured”.

He accused the outgoing Santos government of “rolling out the red carpet for criminals and drug traffickers on their way into Congress” – a sardonic reference to two of the accords’ key articles: an amnesty for ex-guerrillas found guilty of the more minor crimes and the guarantee of 10 seats for FARC representatives in Congress for the 2018 and 2022 legislatures.

Supporters, wearing baseball hats and t-shirts emblazoned with the Duque slogan “Big Heart, Firm Hand”, had their own simple message. “We were used by President Santos,” said Jorge Eliécer Vasquez, a representative of a FARC victims group. “He made us believe his promises of reparations, but abandoned us as soon as the deal was signed. We want peace, but not without justice.”

Asked by IRIN how he would renegotiate a better deal on behalf of victims, Duque gave no specifics but replied: “The courts have said that the norms of implementation can be modified.”

Tomás Ayuso/IRIN
Tomás Ayuso/IRIN
Supporters celebrate the arrival of the political phenom to the venue. Should he emerge victorious on 17 June, Duque, at just 41, would become the youngest-ever Colombian president.

Most observers expect tinkering rather than wholesale changes. “A Duque administration may chip away at the edges of the peace deal, but will be unlikely to dismantle it,” James Stavridis, a retired admiral and former commander of US military operations in the region, wrote recently for Bloomberg.

Petro, the first left-wing candidate with a realistic shot at the Colombian presidency since the 1948 assassination of charismatic liberal populist Jorge Eliécer Gaitán, may be languishing in the polls but still has an outside chance if he can build a strong enough coalition of left-leaning voters and those wary of disrupting the peace deal. 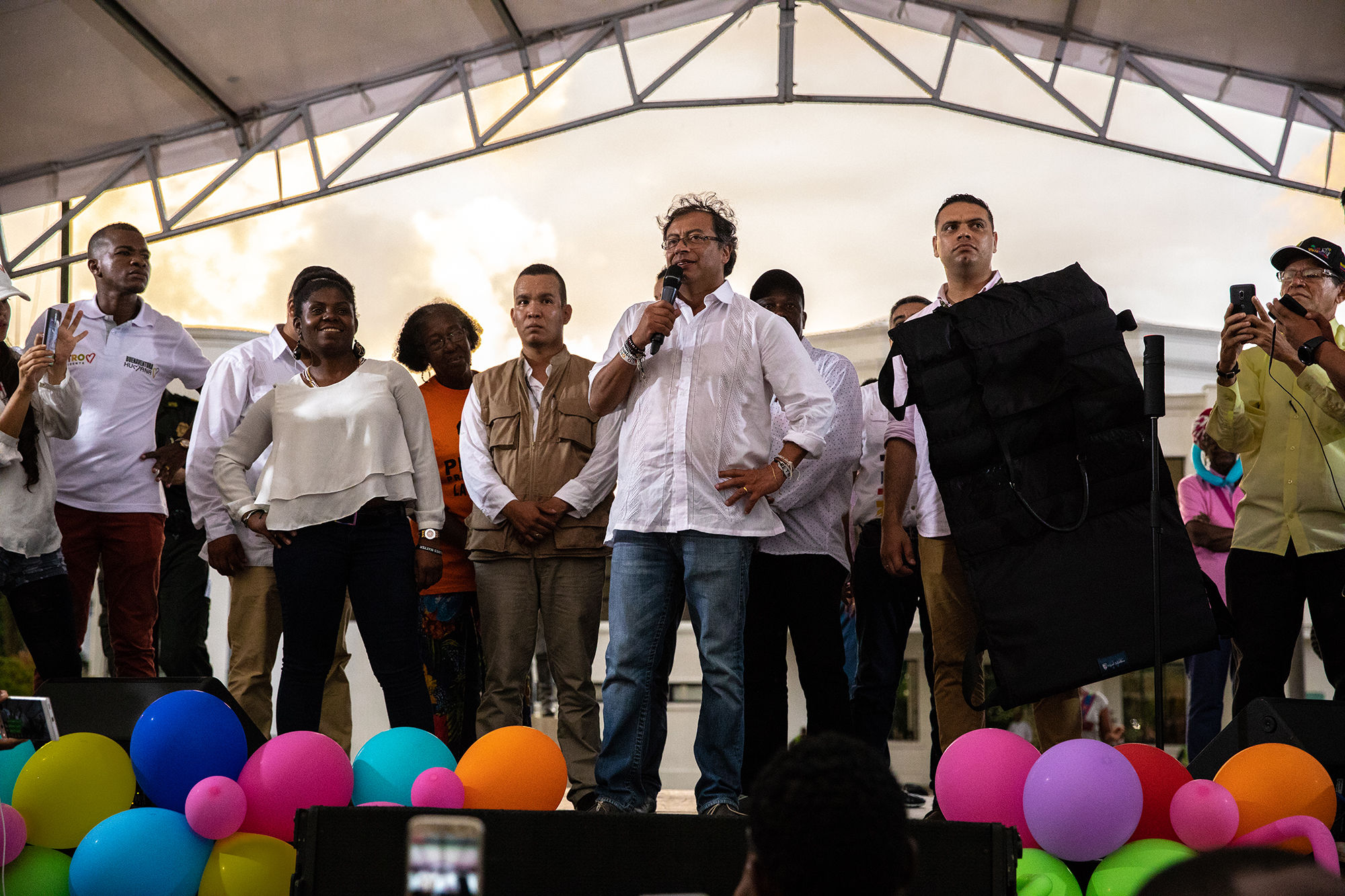 Tomás Ayuso/IRIN
Tomás Ayuso/IRIN
Petro, a former left-wing guerrilla, urges his supporters to get out to the ballot box, saying they must vote now or it’ll be too late to rein in Colombia's corrupt elites.

His tenure as mayor was marked by disputes with the private sector as he tried to advance controversial social reforms. As a presidential candidate, one of his main campaign promises of “buying up unproductive land” from the rich is being presented by his opponents as evidence that he is bent on mass expropriations in the vein of Chávez, the perennial boogeyman of Colombian politics.

Spurred on by fears the recent election victory of Chávez’s heir, President Nicolás Maduro, could cause more people to flee Venezuela, the Duque campaign has been relentlessly pushing the idea that a Petro victory will turn “Colombia into another Venezuela”.

At a May rally in the main plaza of the Pacific-coast port of Buenaventura, Petro responded to his rival’s comparison: “Uribe is the Maduro of this country,” he exclaimed, drawing a laugh from the capacity crowd. “I’m the opposite of Uribe and Maduro,” he continued. “I’ll free us from the chains of exploitation. The old kleptocratic elites [Uribe] have held us back for far too long.”

Flanked by bodyguards, the progressive candidate offered to break the wheel that drives Colombia’s inequality and cycles of generational violence. After hours standing in the rain waiting for the candidate’s arrival, the crowd – in a city hard hit toward the end of the conflict and that has seen a recent spike in criminal violence – cheered his promises of peace. 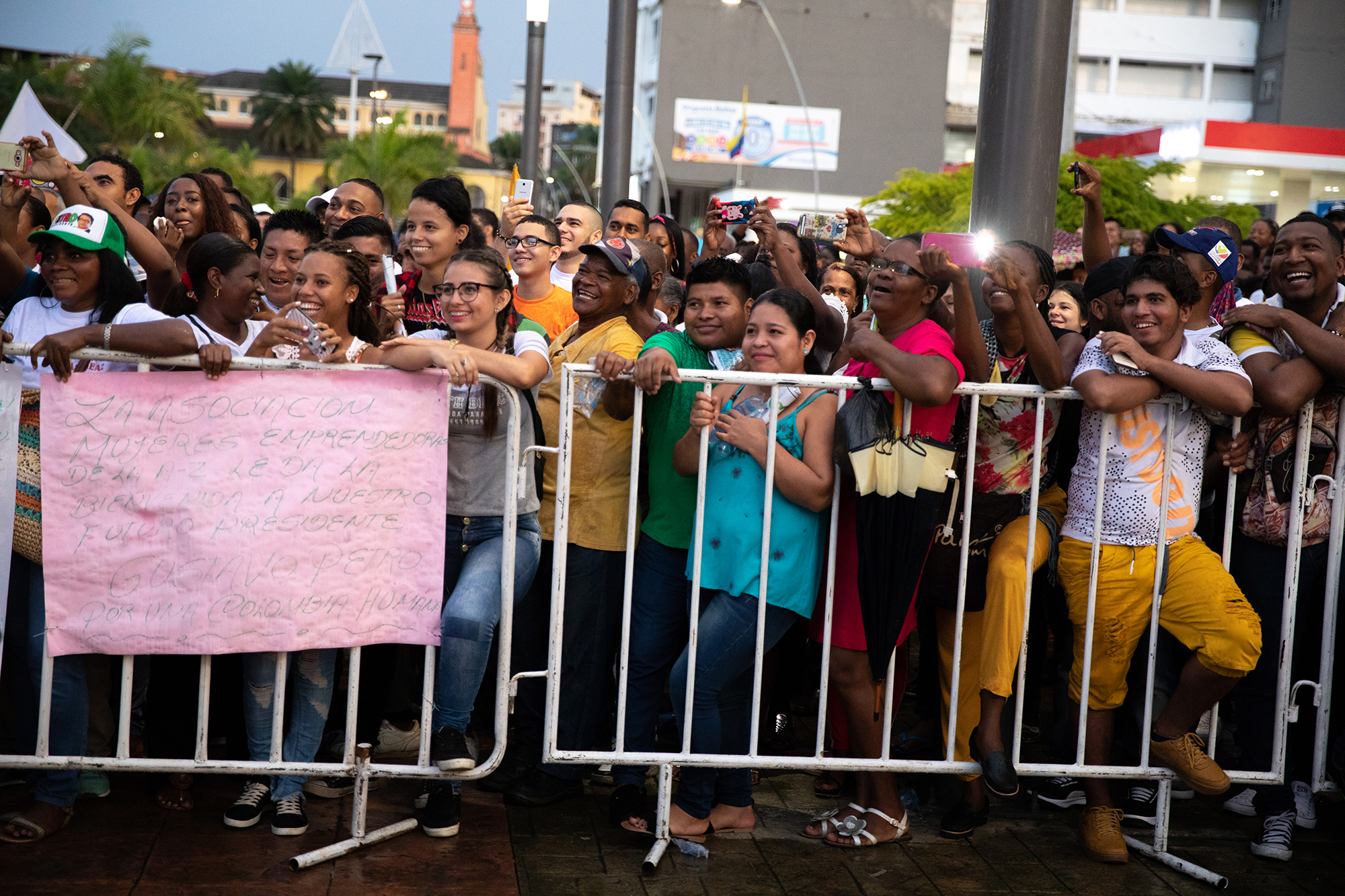 Tomás Ayuso/IRIN
Tomás Ayuso/IRIN
The threat of storms and heavy rain does little to diminish the crowds as supporters of Petro, seen as the progressive candidate, flock to Buenaventura’s main square to hear his vision of a "Humane Colombia".

Petro drew rousing applause with his comparison between land developers who covet communal areas for mega-projects – such as terraforming Buenaventura’s deep-water harbour – and the whip-wielding master that exploited the labour of enslaved Afro-Colombians during colonial times. “We either break the chains that bound us to our cruel past,” Petro proclaimed, “or we seize this moment like our freedom-fighting forebears did against the Pharaohs of Egypt, against the Spanish Kings, against the slave masters.”

Rodrigo Londoño (better known by his nom de guerre, Timochenko), the former FARC commander-in-chief who now leads the successor political party, called off his campaign after threats to his life and heart-related health issues made his candidacy unsustainable.

Speaking to IRIN at his rural headquarters in the remote village of Puerto Esperanza in the eastern department of Meta, he indicated that the FARC would remain fully committed to peace whatever the outcome of the election.

“There’s no retreat from the peace we achieved,” he said. “This is a difficult moment for us; some of our guys are growing impatient with the government dragging their feet. But we remain committed and hopeful. What the FARC wants, and agrees on, is peace.” Asked if this would still be viable if Duque were to win and follow through on his campaign promises, Londoño took a second or two before offering a conciliatory reply: “Achieving peace would be more challenging, but would remain possible.”