Despite passing 16 resolutions on Syria since 2012, the divided UN Security Council has achieved little in stopping the war and suffering. Security Council resolutions are carefully worded. What does the diplomatic language of those resolutions tell us about the divisions and frustrations of the diplomatic process? In three graphs, we show how the carefully-selected words and phrases unintentionally illustrate institutional failure and impotence.

When the Council is cross, and its previous appeals ignored, it will... appeal again... and again - using words like "reiterating", "reaffirming", "recalling", and, well, lots of other action verbs ending in "ing".

If things are getting really bad, it may then step up its language to "grave concern" and "grave alarm". The word "grave" has been used by the Security Council 24 times from 2012-2015, approximately once for every 10,000 deaths in the Syrian conflict. 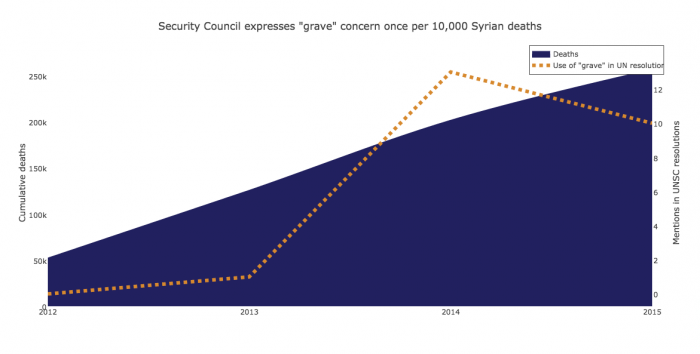 Back in 2009, researcher Justin S. Gruneberg (who, by the way, was attempting to demonstrate bias at the Security Council) reckoned these were the core emotive words (weakest to strongest):

The study found the "instructive" language of the council's resolutions can be ranked from weak to strong as follows:

We found the three "big guns" deployed on Syria as follows: In 2014, there was a lot of "demanding"; but the destructiveness of the war has clearly receded, so we're back to just "requesting".

However, Syria's agony may have achieved one thing: the term "deeply outraged" was used in a 2013 resolution about the use of chemical weapons, possibly for the first time ever in a UN Security Council resolution.

History has, after all, been made. Outrageous history.