“We expected a lot each time peace talks were held, but nothing ever happened,” 82-year-old Maran Naw, who lives in Kachin’s Mung Nar Lavang IDP camp (population 200), in a government-controlled area just outside Kachin State’s capital Myitkyina, told IRIN.

He has fled his village 10 times because of the conflict. “I don’t know if I’ll ever have a chance to enjoy peace before I die,” he said.

According to the UN Office for the Coordination of Humanitarian Affairs (OCHA), the conflict in this remote corner of Myanmar bordering China has displaced close to 100,000 people since June 2011, and an unknown number have been killed, following the collapse of a 17-year ceasefire between government forces and the Kachin Independence Army (KIA), which has been fighting for greater autonomy from Myanmar’s central government for decades.

Based on Year 2000 estimates, Kachin State has a population of 1.27 million.

Over the past three years, the two sides have met several times to negotiate a ceasefire and some tentative agreements have been signed but the violence has continued, causing some to be displaced multiple times.

“It’s quite frustrating and depressing [for IDPs] as they have no idea when the war will end,” said Seng Li, programme manager with the Kachin Baptist Convention (KBC), an NGO which provides health, food, education and shelter support to an increasing number of IDPs in the area.

In April, fresh fighting displaced another 3,000 people, some for the second and third time, from more than 14 villages and four camps in rebel-controlled areas; 96,000 are displaced as of May 2014, with more than half of them living in KIA-controlled areas, making humanitarian access a challenge.

Matthew Smith, the executive director of Fortify Rights, an NGO which conducts human rights investigations in Myanmar, visited Kachin in early 2014, and said the humanitarian response was inadequate.

"We've documented sizeable humanitarian gaps in camps in both KIA and government-controlled territory. Nearly every camp we visited in government territory had problems with water supply. The state of water and sanitation appeared to be at crisis levels in some camps," he said.

Norwin Schafferer, an OCHA humanitarian affairs officer explained: “Access to the non-government areas has been very restricted since the beginning of the violence in 2011, and has mostly been through local NGOs.”

Cross-line missions, run by the UN and international NGOs to support Burmese NGOs with access to both sides of the conflict, manage to provide much-needed assistance, Schafferer said. However, their reach remains limited.

“Much of the infrastructure that was initially set up for the IDPs was intended to be temporary and now needs to be repaired or replaced. This goes beyond shelter and includes WASH [water, sanitation and hygiene] facilities such as latrines - so even where these facilities exist, there's a good chance they now need to be improved.”

A 2 May WASH situation report recorded gaps in available latrines. For example, in the Man Wing Gyi camp, the influx of 838 new people to a space that was already home to 1,438 put additional strain on limited facilities. The assessment estimated 42 new latrines were needed for the camp to meet SPHERE standards - global best practices in food aid, nutrition, health, water and sanitation and emergency shelter provision. However, it noted none were under construction or in planning.

A group of children playing at the Jamaikaung IDP camp outside Myitkyina in northern Kachin State. Some 100,000 remain displaced following the collapse of a a 17-year-old ceasefire betweent government forces and the Kachin Independence Army. 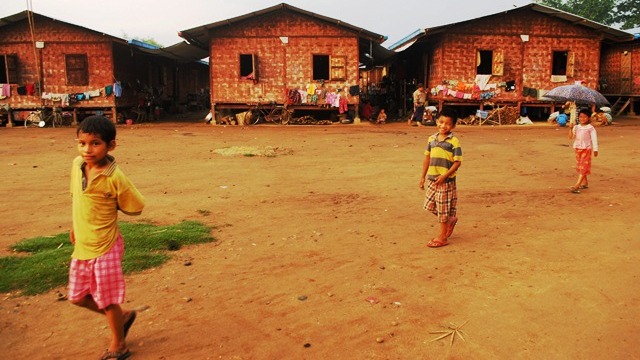 In Thagara Mango Grove camp, which houses more than 500 people near Kachin’s Winemaw Township, residents say there is only one toilet for every six families.

“Every morning we have problems waiting for a turn for so long,” said Maung Kywat, 45, who frequently instructs his children to go and defecate in the open space outside the camps.

Amid desperate conditions, the IDPs, caught in the protracted cyclical violence, feel hopeless and stranded as humanitarian conditions worsen.

“How can I know? Our future looks so unclear,” 41-year-old Yaw Htang, a father of three children, said. Today he lives with his family in a bamboo hut with a corrugated metal roof in Mung Nar Lavang IDP camp outside Winemaw town.

“[Even if the war stopped today] I would also have no idea how to restart our life,” said the farmer, who fled with his family in 2011 after fighting resumed.

“As displacement becomes longer, access to livelihoods for the IDPs becomes increasingly important. Some projects have attempted to establish home gardens, and some of the displaced work on local plantations,” explained OCHA’s Schafferer.

“There are not jobs every day for us. Most of the time, we’re underpaid,” said Yaw Htang who left his own paddy fields and orchards behind and now works as a day labourer on nearby farms when work is needed, earning US$3 per day.

“This sort of daily labour is unpredictable and not a longer-term solution,” said Schafferer.

For others, the search for income puts them at risk of being trafficked.

“Looking for jobs along the Chinese border, some people, especially women, are at high risk of falling prey to the human traffickers,” said Julia Marip of Kachin Women’s Association Thailand.

“We have heard about cases of potential human trafficking across the border into China,” confirmed OCHA’s Schafferer. “In the past there were local organizations that supported trafficking victims but those services have been disrupted by the conflict and need to be re-established.”

According to Smith of Fortify Rights, "this is a situation of protracted displacement and needs to be treated as such. Unfortunately, the displaced aren't going home any time soon and the humanitarian response needs to reflect that reality."