With more than 16,000 confirmed deaths from COVID-19 and rising fast, Brazil is attracting most of Latin America’s coronavirus headlines. But the country in the region with by far the highest number of deaths per capita – more than twice Brazil’s mortality rate – is Ecuador.

In and around Guayaquil – the western port city that is Ecuador’s most densely populated area and home to more than three million Ecuadorians – the rapid spread of the virus became too much for the health system in March and April.

As the funeral network and cemeteries were overwhelmed, bodies littered the streets and cardboard coffins were handed out to bereaved families. Concern is now turning to the capital, Quito, where the health system is reported to be stretched to the limit and the authorities have picked up the bodies of at least six people who died on the streets.

For most Venezuelans living in the country, having fled the economic and political chaos in their homeland, the spread of COVID-19 and the accompanying lockdown measures have hit hard, cutting their ability to work, and to support themselves and their families back home.

Some of the more than 380,000 Venezuelan migrants in Ecuador also feel the pandemic has exposed them to increased discrimination – from employers, landlords, even health service providers.

Many have had enough and – due to growing xenophobia or concern over the scale of the outbreak – are leaving the country. Most either go back to Venezuela, or try their luck across the border in Colombia, where tens of thousands of Venezuelans have also been escaping lockdown restrictions to head home.

“Our data shows a wide range: from 40 to 700 Venezuelan migrants are leaving every day, using irregular paths through a closed border,” Tathiana Moreno of the Ecuadorian Red Cross told The New Humanitarian in late April. “Most of them have less than a year living in Ecuador, so they have weak ties within the country and find themselves without any support network.”

Paola Moreno, a migration and human mobility researcher in Ecuador since 2003, explained how migrant communities may be more vulnerable during the pandemic even though they can access healthcare without needing legal documentation.

“Ecuador has a universal and public health system,” she told TNH. “But there is a discretional aspect of the service, especially during the current collapse: health workers are forced to choose who to treat. This is dangerous for migrants, because some health workers may choose to treat Ecuadorians first.”

On 24 March, as cases of COVID-19 began to soar in Ecuador, President Lenín Moreno signed an executive decree that granted a 60-day extension to Venezuelan citizens to formally register in the country and apply for temporary residence visas.

But Daniel Regalado, president of the Venezuelan Civic Association of Ecuador, a support group for Venezuelans in the country, said not enough is being done by the government to help the migrants through the crisis. "They have taken measures to try to protect vulnerable people in Ecuador, but nothing aimed specifically at migrants," he said.

Venezuelans were already reporting widespread xenophobia and discrimination in Ecuador before the pandemic. On average, 93.7 percent of Venezuelans interviewed by the Displacement Tracking Matrix run by the UN’s migration agency, IOM, said they felt discriminated against due to their nationality.

“Discrimination is an irrational response to fears associated with the spread of the disease,” said María Clara Martín, representative in Ecuador for the UN’s refugee agency, UNHCR. “We have seen as many situations of xenophobia as we have seen acts of kindness and support.”

Asked by TNH for comment about several allegations of discrimination against Venezuelan migrants during the pandemic, the economic and social inclusion ministry in Quito did not respond by time of publication.

“Discrimination is an irrational response to fears associated with the spread of the disease. We have seen as many situations of xenophobia as we have seen acts of kindness and support.”

Monica Salgado, a psychologist for the Jesuit Refugee Service in the Quito district of Pichincha, said the lockdown measures had also led to an increased risk of domestic violence for Venezuelans and others.

“There are currently many tensions at the home of migrant families,” she said. “Some have to share very small places, deal with the loss of a job, the stress regarding the pandemic. So we are looking at a rise in reports of domestic violence. In some areas, claims have risen about 40 percent.” 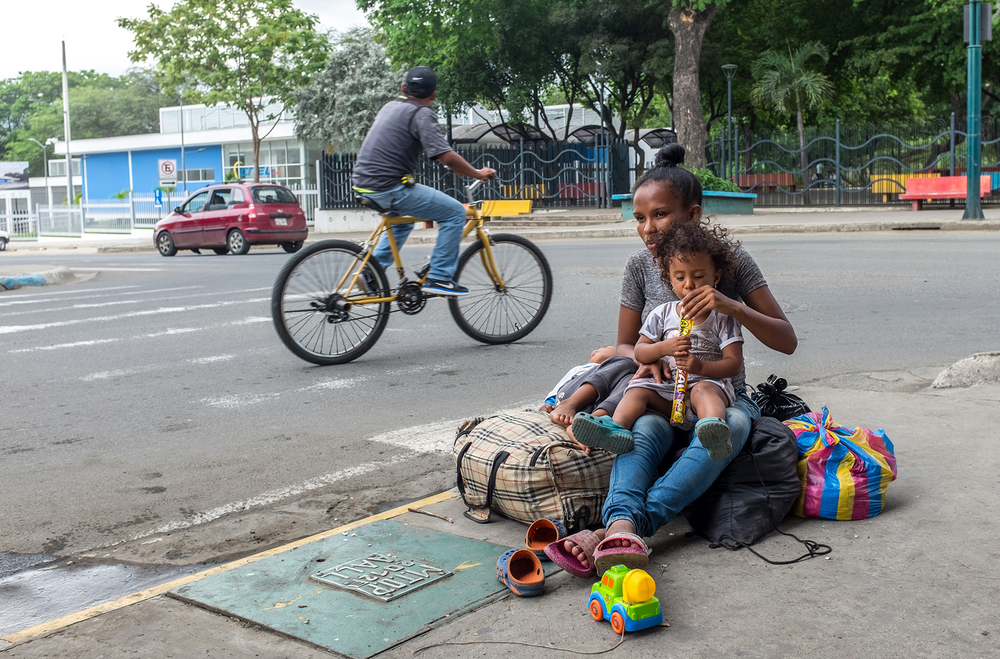 Glenn R. Specht-grs photo/Shutterstock.com
A Venezuelan family asking for money in Ecuador on 2 February 2019. Some Venezuelans living in Ecuador say they are facing increased discrimination in addition to economic troubles as a result of the pandemic.

Get sick or go hungry

Venezuelan migrants are often suffering even if they’re not seeking medical treatment. Lacking funds, legal paperwork and support systems, many rely on informal work, avoid using healthcare, and don’t speak out about abuse and discrimination.

Deisi Hernández and her family walked for 11 days during their journey from Guárico, Venezuela to Quito, entering the country on a dangerous smuggling route.

Hernández started selling breakfast and tobacco on the street, making $15 a day, enough to feed her family, including her three children. The strict lockdown – now extended across the country until at least 31 May – forced her to stop working, and she hasn’t been able to pay rent since March.

“Our landlord started being very aggressive about it: he cut our WiFi signal, water service, and our electricity,” Hernández said. “I lived in a room with my husband, two teenagers, and a baby. We only have the four walls that keep us safe. Nothing else.”

Less than three weeks after she stopped paying rent, Hernández and her family were evicted. They are currently living in a borrowed room in a farm just outside the city.

Ecuador’s National Assembly passed measures on 24 March intended to prevent the eviction of families for non-payment of rent until 60 days after the end of the state of emergency. But while the government has vowed to prosecute those who evict people, many migrants fear these regulations may not be followed.

“There’s a big difference between a public statement and an effective vigilance and protection system aimed to protect those threatened with eviction,” Moreno pointed out.

“We wake up and walk the streets until we find someone who can help us. The children eat first, and if there’s something left, on a good day, we eat once a day.”

While the Ecuadorian authorities have been vocal about the importance of staying home, Hernández said she simply didn’t have the money to follow the rules – she said she feared hunger more than the virus.

“We wake up and walk the streets until we find someone who can help us,” she said. “The children eat first, and if there’s something left, on a good day, we eat once a day.”

Moreno said a lockdown without a plan of economic support for vulnerable migrants impinges on their basic human rights.

“Right now, access to work is completely limited, which affects the possibility of having a roof over your head,” she said. “We also have to wonder what happens to those children who aren’t going to school these days. Are they getting enough food? Are they forcing their parents to stay home even though they have to find food? And, under a collapsed system, will migrants, regular or irregular, have access to the health system? It’s only natural for them to feel more vulnerable than ever.”

The Ministry of Economic and Social Inclusion is providing a pandemic aid package for the most vulnerable – including food and some legal services – but it is not aimed specifically at the migrant community.

Only a few aid initiatives cater for Venezuelan migrants in Ecuador – mostly run by Venezuelan collectives, the Jesuit Refugee Service, and church groups.

Isabel Rodríguez, the Ecuadorian owner of “The Middle of the World” – one of only a handful of refuges housing Veneuzelan migrants in Quito – explained that the shelter was forced to lock down during the outbreak and not accept newcomers, but the migrants already there were allowed to stay.

“No one was allowed in or out,” she said. “It was a difficult decision because many migrants are currently unable to pay rent, so many are ending up on the streets, and (other) migrant homes are closed. But it was a decision taken after listening to the advice of our medical staff.”

The shelter – run by a team of 14 Venezuelan migrants who reside there and were on strict lockdown for over a month and a half – houses 65 people, many of them children and elderly.

Rodríguez oversees the running of the centre from her home, and talks with her suppliers so they deliver directly to the shelter. “For now, they are safe,” she said. “They have food and a place to sleep, which is more than many have nowadays.”

Since the second week of May, residents have been allowed to go in and out of the shelter – some left for Colombia as soon as they could – but still no new migrants are allowed to come in and stay.

Rodríguez said some homeless and evicted people – not necessarily Venezuelans – receive some protection through a programme run by the government and the Ecuadorian Red Cross that includes a shelter with food to keep them off the streets during the outbreak.

To guard against fuelling discrimination and xenophobia, UNHCR aims its assistance at both Venezuelan migrants and Ecuadorians, delivering 5,000 hygiene kits and 2,500 food kits to vulnerable families. It has also donated 500 mattresses, 3,000 blankets, and 900 litres of alcohol – for handwashing due to the lack of water – to shelters that host both migrants and Ecuadorians.

Martín explained that UNHCR is focused on communicating a message that the coronavirus does not discriminate, and neither should people.

“We should not forget that refugees are people who have been forced to flee their homes and have gone through very difficult situations,” she said. “They need solidarity and support, and they have also shown us their empathy and willingness to contribute.”

As it has also done in neighbouring countries, the refugee agency has promoted a media campaign in Ecuador showing how Venezuelans participate in national efforts to fight the virus.

“We have cases of refugees or asylum seekers working on the front lines during the emergency,” Martín said. “There are also several families who, from home, have looked for ways to support the communities that received them.”