Karina Ribullen would rather die of coronavirus than die of hunger.

The 46-year-old from the Venezuelan town of San Antonio wore a dirty surgical mask on her sunburnt face as she shouted out her wares at the chaotic and crowded border market of Villa Rosario in Colombia.

The frontier was officially closed on 14 March to fight the spread of coronavirus, but that has done little more than slow cross-border traffic.

Immediately after the border closure, TNH witnessed thousands of migrants crossing from Venezuela near Cúcuta – some six million Venezuelans have fled the country’s economic collapse since 2015.

“If I miss a day of work, my family doesn’t eat,” Ribullen said, between peddling medical masks, soda, and coffee to passersby. “It’s not bravery, it’s desperation.”

Venezuela’s government announced on 24 March that COVID-19 infections had reached 91; all, it said, imported from abroad, including 10 from Colombia. The real number, as in many countries, is believed to be far higher. 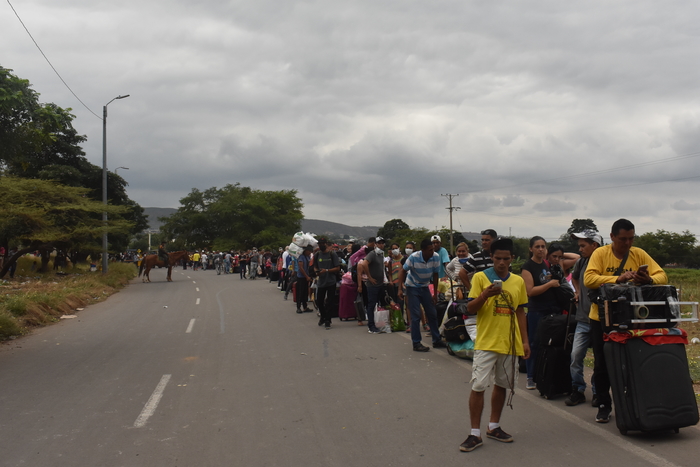 But Venezuelans, already suffering from years of food and medicine shortages, are defenseless against the pandemic, said Fernando Gomez, a 54-year-old systems engineer in Barquisimeto, in western Venezuela.

“The government says wear masks, wash your hands often, and stay inside,” Gomez said. “But we don’t have water, we often don’t have electricity, and there are no masks.”

Lack of water will force people out of their homes to collect water and prevent the frequent handwashing that health officials say is essential to fight the virus.

“The government says wear masks, wash your hands often, and stay inside. But we don’t have water, we often don’t have electricity, and there are no masks.”

All of which leaves the country of about 28.5 million people dangerously vulnerable, confronting a broken medical system, water shortages, disinformation from an authoritarian leader, and a collapsed oil-based economy.

In hospitals, no water, no soap, no masks

“There’s still no water in the hospital,” nurses wearing masks outside Lídice Public Hospital in Caracas, the capital, told TNH. “We had to fight to get masks and gloves, even though they are mandatory.”

According to a National Hospitals Poll, 70 percent of hospitals reported intermittent water service last year, when 20 percent reported getting almost no water. The situation worsened during March and April, when two national blackouts left the country in the dark for more than three days. According to the survey, hospitals in March lacked electricity for 507 hours, two thirds of the time.

“There are between 25,000 and 35,000 medics, nurses, and health personnel that have fled the country,” said Dr. Andrés Barreto Ruiz, an epidemiologist and member of the NGO Médicos Unidos Venezuela.

“Coronavirus arrived in Venezuela at the worst possible moment: hospitals without supplies, equipment, or human resources,” he said in a telephone interview from Caracas.

Astrid Cantor, a Venezuelan medical surgeon currently working in Spain, wrote this week in The New York Times of the chronic shortages and highlighted unofficial figures that there are only 84 intensive-care beds in the entire country.

Many health workers have been forced to improvise and make their own masks, said Mauro Zambrano, a representative of the Union of Hospital and Clinic Workers.

He described widespread shortages in hospitals of even basic sanitisers, like soap and bleach. “We have no (protective) glasses, no gloves, nor any kind of biosecurity equipment,” he explained.

Across Venezuela, the government has designated 46 hospitals to operate as “sentinel clinics” for coronavirus patients. All have reported serious shortages of personnel and supplies for the past five years, according to Barreto Ruiz.

“No one goes to the hospital in Venezuela. The hospitals are a death sentence.”

Except for medical and security force personnel, it is illegal to be on the streets to do anything but shop for food or medicine. Zambrano said only one sentinel clinic offers transport for workers, and most have not provided ID tags to facilitate commutes.

During this first week of alert, Zambrano said no coronavirus patients have been admitted to Vargas Hospital, as mild cases are ordered into isolation at home. But a lack of protocols left him unable to explain how infected patients get home, or what they should do if they need to be hospitalised at a later stage.

The government has not announced if a single coronavirus patient has been admitted to the hospitals.

“No one goes to the hospital in Venezuela. The hospitals are a death sentence,” said Diego Alvarez Guzman, 27, from the western city of Merida, as he humped a huge bag of food across his back while waiting to illegally cross the border and head back home through informal paths near Cúcuta.

Guzman doesn’t trust Venezuela’s hospitals any more than he does the government’s ability to control the pandemic.

“My family has a farm way out in the mountains. We’re going there till this passes,” he said. “I don’t trust the state to deal with this.”

In the Colombian border state of Norte de Santander, social worker Juan Carlos Maldonado told TNH: “For years Venezuelans have crossed the border to give birth, to vaccinate their children or to get medical treatment. Now, with a mandatory lockdown… people with chronic medical conditions or emergencies are trapped.”

Maduro denies there are shortages in Venezuela, insisting in a national broadcast on 16 March that hospitals have all the mandatory equipment.

There is no news about when health workers will receive biosecurity equipment, which Maduro said was being shipped by China along with thousands of test kits.

He also claimed the country’s collapsed pharmaceutical industry would be able to produce both a treatment and a cure for coronavirus – neither of which exist.

He recommended to the nation a homemade “cure” promoted by one Venezuelan, one “given to us by our ancestors: pepper, lemon grass, honey and ginger”.

Although the World Health Organisation advises that only people suffering respiratory problems should wear masks, Maduro decreed: “No one can walk the streets without a mask.” 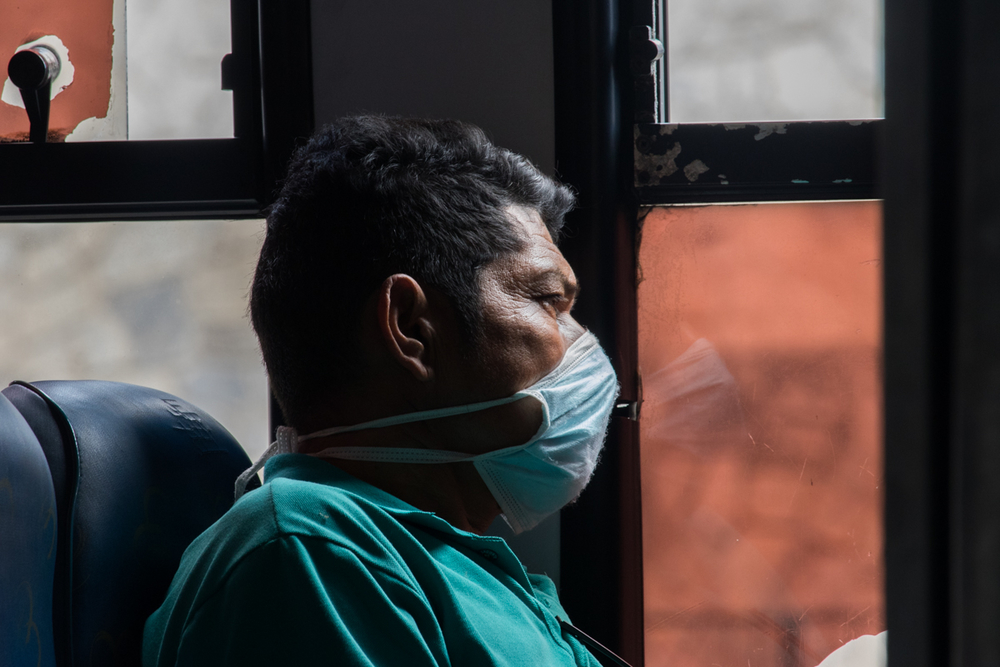 Ivan Reyes/TNH
Public transport continues to operate in Caracas, though only for exceptional cases, since the government started imposing the quarantine.

But masks are not readily available and, if they were, most Venezuelans can’t afford them. So people are “making their own handmade masks with old cloth, cardboard and paper”, hairdresser Maria Fernanda Rodríguez explained.

She said her slum neighbourhood of Cotiza, near the presidential palace in Caracas, hasn’t had water for a week, forcing people to break quarantine to collect it from mountain streams and an abandoned construction site.

More complications for the elderly and the poor

Security forces have been deployed throughout Caracas. In middle-class neighbourhoods, police officers politely ask people to return to their homes and stay there.

But it’s harder to stay isolated in poor neighbourhoods where entire families are crowded into one room and most people go out daily to buy food.

In the 23 de Enero slum in Caracas, gangs who control the area have imposed a 6 p.m. curfew in response to coronavirus. The executions of three people by gangsters on 21 March – blamed by some on the curfew – have raised tensions. “People are very scared now,” said Jesús Delgado, a social worker living in the neighbourhood.

The elderly, the most vulnerable even before coronavirus, face a dire situation: with pensions of less than $3 a month, they have little access to food and medicine, and many are alone because relatives have migrated.

Read more: In Venezuela, the elderly are the ‘invisible victims’

Luis Francisco Cabezas, director of the civil rights association Convite, said that while the quarantine is necessary it will bring critical food insecurity and possible depression to the elderly and disabled.

“Vulnerable populations… are going to suffer,” he said. “For those who are already dangerously isolated, quarantine is likely to make it worse.”

He dismissed government promises to deliver food boxes to the homes of vulnerable people, saying, “I don’t believe at all that they have the distribution network for that.”

In some cities, like northwestern Maracaibo, fuel can be provided only to military, police, and medical personnel. But paediatrician Ariday Hernández wasted five hours trying to get petrol last Friday. “The national guard isn’t allowing doctors to get gas,” she told TNH. “We have to wait in line for hours while they sell gas to those who want to pay exorbitant prices.”

Hernández has devoted her life to public health service, but now works in a private clinic and fears for the future. “It’s scary to think of what’s coming next,” she said. “With our broken public health system, how long will we suffer the consequences of coronavirus?”