This article is part of our in-depth coverage. Read more like this...
Part of a special project exploring violent extremism in Nigeria and the Sahel
DIFFA, Niger

There has been a worrying upsurge in Boko Haram violence in Niger’s southeastern Diffa region, adding to the caseload of an already underfunded humanitarian crisis.

In the latest attack on 2 July, the jihadists raided the village of Ngalewa, near Kablewa, killing nine and abducting 37 – all of them young girls and adolescent boys. The gunmen, arriving at night, looted food supplies and rustled cattle, before escaping.

On 29 June, two female suicide bombers attacked an internally displaced persons camp in Kablewa run by the UN refugee agency, UNHCR, close to the main town of Diffa. Four people were killed, including the two bombers, and 11 others were injured in the twin blasts.

Diffa Governor Dan Dano Mahamadou Lawaly has ordered the transfer of the 16,500 IDPs in Kablewa to a new camp a few kilometres north of Route National 1, the road running to the Chadian border in the east.

South of the highway is seen as vulnerable to attack by Boko Haram, an insurgency originating in Nigeria but believed to be operating in Niger from largely abandoned islands in Lake Chad.

Boko Haram’s strategy appears to be to grab what supplies it can ahead of the rainy season, when rising water levels will make crossing the Komadugu River – which flows along the southern border with Nigeria – all the harder.

Bamouni Dieudonné, the Niger head of the UN’s emergency aid coordination agency, OCHA, explained how the rising threat would mean storing less food and medicines in frontline warehouses and having to restock more often.

“We will have to rethink our approach of provisioning warehouses in the region with three month’s worth of supplies. They are now vulnerable,” he told IRIN. “It will increase costs as we’ll have to warehouse less.”

While the increased tempo of attacks may have been predictable, the bombing of the Kablewa IDP camp was a surprise, said Dieudonné.

Boko Haram attacks on IDP camps have been fairly common in northeastern Nigeria but not so in Niger, where the extremist group’s attention has tended to focus on military targets.

The Kablewa attack has generated tensions with the host community, underlined by clashes this week when IDPs leaving the camp strayed onto farmland, threatening crops growing in the field.

The clashes may prove to be an isolated incident, but there are fears they also represent the beginning of a new intolerance of IDPs, seen now as a potential security threat.

“That would be a new and disturbing trend in a region that has shown a remarkable degree of hospitality towards IDPs and refugees,” said Dieudonné.

The 16,500 displaced in Kablewa were among 33,000 people from 100 villages spread over 74 islands in Lake Chad who were given a 48-hour deadline to leave their homes in May 2015 ahead of a government offensive in the area.

They were originally moved to the mainland towns of N’Guigmi and Diffa, before being settled in Kablewa. This is now the third time they are being forced to relocate.

That is not so unusual in this conflict. According to a survey in April by the International Organization for Migration, more than 70 percent of people in the displacement site of N’guel Madou Maï had been uprooted at least once, 42 percent “three or more times”.

The Nigerien government’s counter-insurgency strategy has been blunt. After Boko Haram’s first attack in 2015, it cleared communities from the lake area and along the Komadugu River, destroying a local economy based on fishing and red pepper cultivation. It also ended the motorbike taxi business in Diffa, one of the few employment options for young men.

“Everybody is in the same basket [IDPs and host communities]. Most people are now solely dependent on international aid. You might have an IDP family living under your roof, but that’s the only difference between you.” 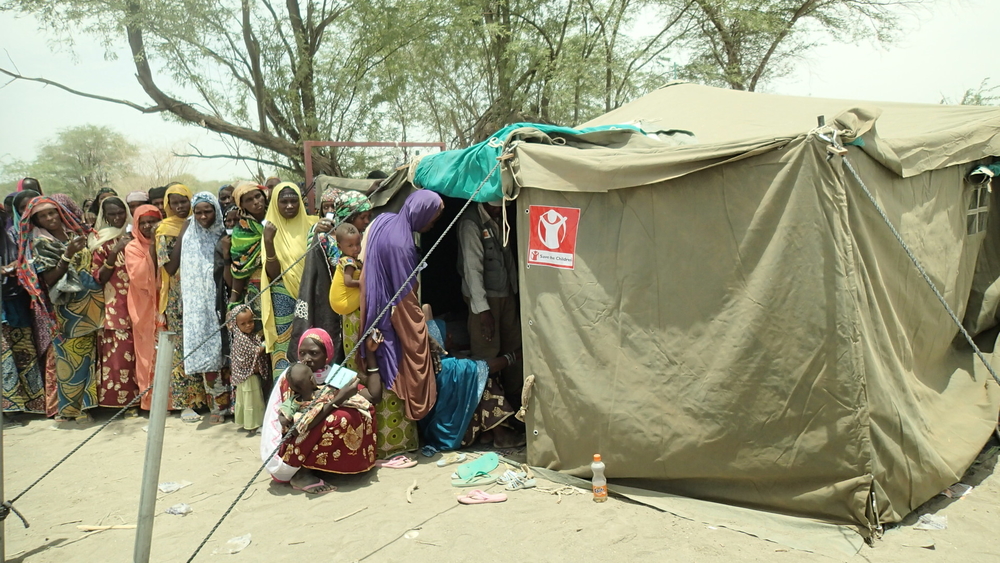 Out of the estimated 700,000 people living in Diffa, two thirds are IDPs, returnees, and refugees. A total of 340,000 are in need of aid. Niger alone is hosting 50 percent of all Nigerian refugees in the Lake Chad Basin region, and yet the $139 million humanitarian operation is only 17 percent funded.

There is not enough aid to go around. IRIN spoke to IDPs in Maina Kadari, one of 140 spontaneous sites across the region. Their complaint was a basic one – the lack of food.

Whiling away the hot afternoon under a tent before the breaking of the Ramadan fast at sundown, the men estimated that as many as 70 percent of them didn’t get a ration and had to rely on sharing among themselves.

“We don’t have enough resources to do a 100 percent distribution for all the IDPs,” acknowledged Kioy. “Needs far outweigh the response.”

The Maina Kadari men said they were also frustrated by a sense of abandonment by the government. In 2015 they had been ordered out of their villages north of the heavily contested Nigerian town of Damasak. They had to foot their own transport bill, but went anyway because they said they trusted the authorities.

They complained bitterly that they have received no help at all from the government.

That sense of injustice and prevailing lack of opportunity can make Boko Haram a potentially attractive proposition for angry young men, said Aboubaker Issa, a youth leader in Diffa.

“[The IDPs] are settling in new places without any assistance, not all are resilient,” he told IRIN. “So, the [government’s] measures have pushed many youths into joining Boko Haram.”

One of the points raised in a Médecins Sans Frontières report critical of the humanitarian response in Diffa was the readiness of aid agencies to accept military restrictions on access.

“History has shown that the counter-insurgency tactics of militaries can be devastating to local populations,” said MSF. “There have been few if any attempts to verify claims of the [Niger] authorities as to the condition of populations living inside restricted access areas.”

It added: “One government respondent even noted that no one knows the condition of those still living on the islands in Lake Chad, despite it being known that thousands returned there against military orders.”

The Maina Kadari IDPs said they were staying put until the government signalled it was safe to return. It was not just an issue of security: They would need help to rehabilitate their homes, rebuild flood defences, and restart their lives.

According to IOM, less than 12 percent of the people surveyed in N’guel Madou Maï were ready to return to their villages. Given the new burst of insecurity, that figure could now be a good deal less.

But Diffa feels safe. It is a base for the Multinational Joint Task Force, an anti-Boko Haram coalition comprising Benin, Cameroon, Chad, Niger, and Nigeria. Heavily armed Nigerien soldiers speed through the town in “technicals”, kicking up swirls of dust, and the airport is home to at least one Ukranian-maintained SU-25 ground-attack jet.

And the battle with Boko Haram has been far from one way. The army killed 57 insurgents in one devastating clash in April, and are in pursuit of the abducted children from Ngalewa – determined for a better outcome than Nigeria’s Chibok girls’ saga.

But the security forces are stretched thin. Last month Niger extended a state of emergency in parts of the western regions of Tillaberi and Tahoua following repeated attacks by Mali-based jihadists.

“The government is doing what it can to provide security, but it needs international support,” said Dieudonné. “All these threats it is facing are coming from outside its borders.”

With additional reporting from Aboubacar Sidi