By the time Ilida Alali was 16, she had been a prisoner in her own home for four years. Both government and rebel ordnance fell without warning on the hotly contested Karm al-Myassar neighbourhood near Aleppo’s airport where she and her family lived. In any case, she had nowhere to go. Opposition groups had occupied the area’s schools since she was 13.

In January last year she asked her father, Ahmed, if she could go out to buy some crisps. “I said ‘okay’,” he recalled. “She went as far as the corner shop and that’s when the bomb fell. When I heard the explosion, I ran out and I found the place covered in dust and my daughter in pieces.”

Ilida’s death was the final straw for the family. Ahmed’s wife, Ramia Aldaher, had already lost a sister and three brothers to the war. A month later, the entire extended Alali and Aldaher families – some 41 people – stole out of Aleppo under cover of night.

“We took nothing – just the clothes we were wearing and our IDs,” said Ramia. They trekked more than 1,000 kilometres to Izmir on Turkey’s Aegean coast and crossed to the Greek island of Lesvos in a rubber dinghy.

The Alali family had fled a civil war only to land in the midst of a humanitarian crisis. An estimated 850,000 refugees and migrants arrived in Greece during 2015 and another 150,000 during the first three months of 2016. Most continued through the Balkans towards northern Europe, where member states were increasingly desperate to stem the flow.

Fences went up on the Greek border with the Former Yugoslav Republic of Macedonia three weeks before the Alali family arrived. They managed to leave Lesvos just two days before the EU-Turkey agreement went into force, which would have kept them there during their asylum process, but their plan to reach Germany on foot had to be scrapped.

The closed border had left more than 50,000 refugees stranded in mainland Greece – too many for civil authorities to house. Under pressure from the European Commission, the Greek military set up 30 tent cities on industrial sites and disused army bases across the country.

Most of these camps were far from urban centres and difficult for aid organisations to reach. With almost no time to prepare the sites, they initially lacked basic amenities such as running water, bathrooms, heat, and electricity. 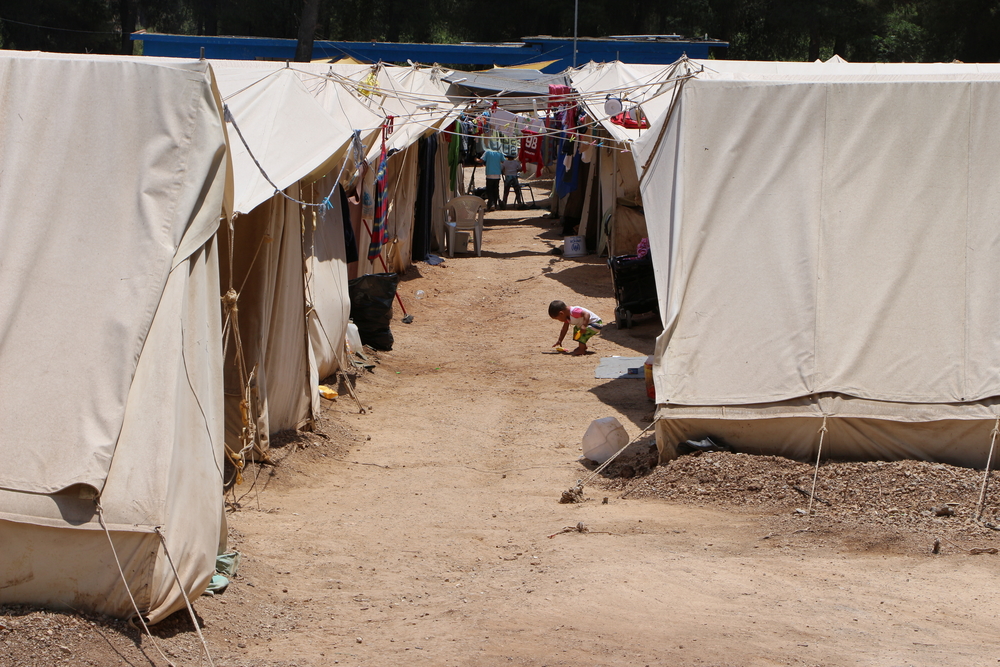 John Psaropoulos/IRIN
Ritsona, a former Hellenic Airforce base north of Athens, was hastily converted into a tent camp for 800 refugees

From warehouse to camp

On 17 March, the Alali family arrived at the place they would be forced to call home for the next six months – a cavernous warehouse behind Gate 10A in Thessaloniki’s port.

“For about the first month we slept on the floor in sleeping bags given out by the army. Then the mayor visited us and asked the army to send us cots,” said Ahmed.

The mayor also ordered the delivery of heating units, portable lavatories, showers, and electricity, but 450 people were still sharing a space where blankets hung from ropes provided the only modicum of privacy.

These arrangements came to an abrupt end when an electrical fire broke out one September morning as people slept. The warehouse was cleared and the Alali family was moved to a tent in Langadikia camp, east of the city.

“The sun hit our tent at seven in the morning and we had to get up. During the middle of the day we had to go to the forest and sit under the shade of the trees,” Ahmed told IRIN. “When winter came, it rained and the whole tent was drenched. The water came up through the ground... Sometimes we asked for new blankets and were told that there weren’t enough, so we slept under wet blankets.”

Worse was to come. In mid-December, overnight temperatures dropped below freezing, and, in January, rain turned to snow. Residents of the camp tried to take refuge in the few brick buildings available, “but there wasn’t enough room for everyone,” said Ramia.

And yet there was plenty of room in Greece. The financial crisis and the introduction of a new property tax in 2011 had brought property sales virtually to a standstill. Hundreds of thousands of apartments stood vacant as unemployed adults moved back in with their parents.

In December 2015, the European Commission had announced an €80 million rent subsidy programme to provide 20,000 accommodation places for refugees in Greece during the following year. The UN’s refugee agency, UNHCR, was tasked with implementing the scheme, but progress was slow. By early October 2016, it had secured only 13,000 spots, leaving thousands of families still living in tents and warehouses during the height of Greece’s coldest winter in years.

“We had this horrible winter and the conditions in camps deteriorated so badly that we were really afraid at one point that people would actually die of hypothermia in the camps - especially newborns, who were turning blue,” said Anne Forget who manages the Urban Response Programme of the Norwegian Refugee Council.

The NRC wanted to help address the housing problem before it became a crisis, but it took the NGO months to get its project proposal approved by the European Commission, for the money to be disbursed and for the Council to recruit staff and house people. It wasn't until November that Forget's teams could start touring half a dozen camps in the area to identify those in greatest need of being moved into bricks-and-mortar housing.

But despite the housing glut, the NRC struggled to find apartments to rent. Landlords were wary of a programme that was funded for only months at a time, and of having refugees as tenants.

In an effort to stay ahead of the worsening weather, the NRC decided to move 400 individuals into hotels. This enabled pregnant women, the sick, the elderly and families like the Alalis to move out of tents. But the cost was high: The NRC paid €25 a night for each hotel resident – some €4,500 a month for the Alali family of six alone.

The agency’s spokesman in Greece, Roland Schoenbauer, said the scheme was designed to provide temporary accommodation for asylum seekers while they awaited relocation to another EU country, and that many more would have benefited if EU members had honoured their pledges to take in a total of 63,000 refugees from Greece. To date, less than 10,000 refugees have been relocated from the country.

Greek Migration Minister Yannis Mouzalas has also come in for criticism for the slow rate of progress on refugee housing despite unprecedented levels of EU funding. “You are responsible for 60,000 people with a billion euros: more than anyone ever had at his disposal,” said conservative MP Miltiadis Varvitsiotis in parliament last month, referring to the funds the European Commission says it has earmarked or disbursed to Greece for refugees since 2015. “I think any local government official would have done a better job than you.”

Over the last month, the NRC has finally begun to transfer refugees into longer-term housing. It has put the Alali family up in an apartment for a quarter of the cost of the hotel, and estimates that through such savings it will be able to house some 2,168 people* in apartments by July.

For now, furnishings are sparse: “it’s mattresses on the floor; one mattress per person, one pillow per person, a fridge, a double stove… There’s no tables, no chairs, no frames, even, for the beds and no Wi-Fi,” said Forget.

The Alalis don’t seem to mind. After walking across Asia Minor and living in a warehouse, an open-air camp, and a hotel, here, for the first time, they have a space of their own, and they are living among Greeks rather than refugees. They beckon guests to their only furniture – a sofa bed left by the owner, its springs long ago caved in – and sit cross-legged on the tile floor while their four children, aged six to 17, retire to equally empty bedrooms. “We are happy that we are in Greece. We are not in a good situation, but we are safe and better than before,” said Ramia. 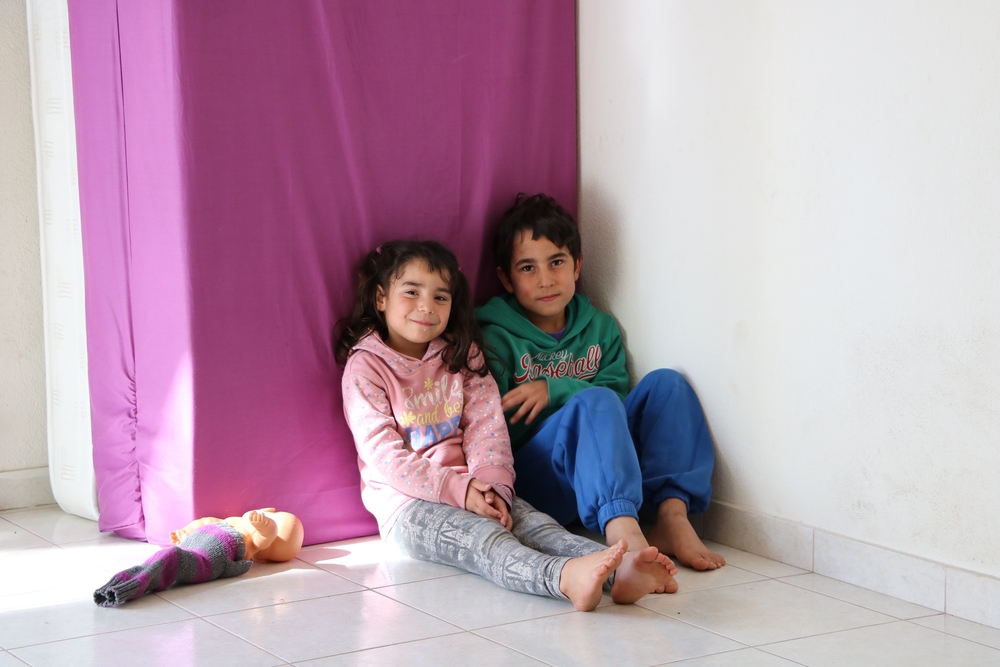 Menios Skordas, a hotelier who rents nine studio apartments to Syrian and Afghan families referred to him by the NRC, admits he was hesitant at first, but explained: “When I saw the faces of the children I lost every inhibition.”

He has noticed that they, too, have acclimatised. “For the first two months, they were very afraid,” he told IRIN. “Now they’re going to the supermarket. Once or twice they’ve taken the bus… The kids are amazing learners. In two months, they are able to communicate in Greek.”

Schoenbauer of UNHCR described apartment living as a double benefit. “Just a few weeks ago, I visited a Syrian family in an apartment close to our office,” he said. “They told me: ‘Every day our Greek neighbours are knocking at our door asking whether we needed anything.’ This is the kind of interaction that starts the process of integration from both sides and this is an underestimated benefit of the whole programme.”

There are benefits for the Greek economy as well. The crisis has depressed real estate prices by more than 40 percent since 2007, and 45 percent in the Thessaloniki area. Rents have fallen proportionally. UNHCR spent the European Commission’s €80 million plus another €5.4 million in donations on apartments and hotels last year. It could top that budget this year.

“The money [landlords] get is much, much better than what they’d get on the [open] market,” said Thessaloniki real estate agent Stefanos Vasileiadis, commenting on clients who have rented to Syrian families via the NRC.

Of the original group of 41 Alali and Aldaher extended family members, 27 have been relocated to Germany. Most of the rest are scattered across camps in northern Greece, where conditions are not as bad as they once were. Tents have been replaced by mobile housing units, adults receive a monthly stipend of €150 to feed themselves, and children can now attend Greek schools. 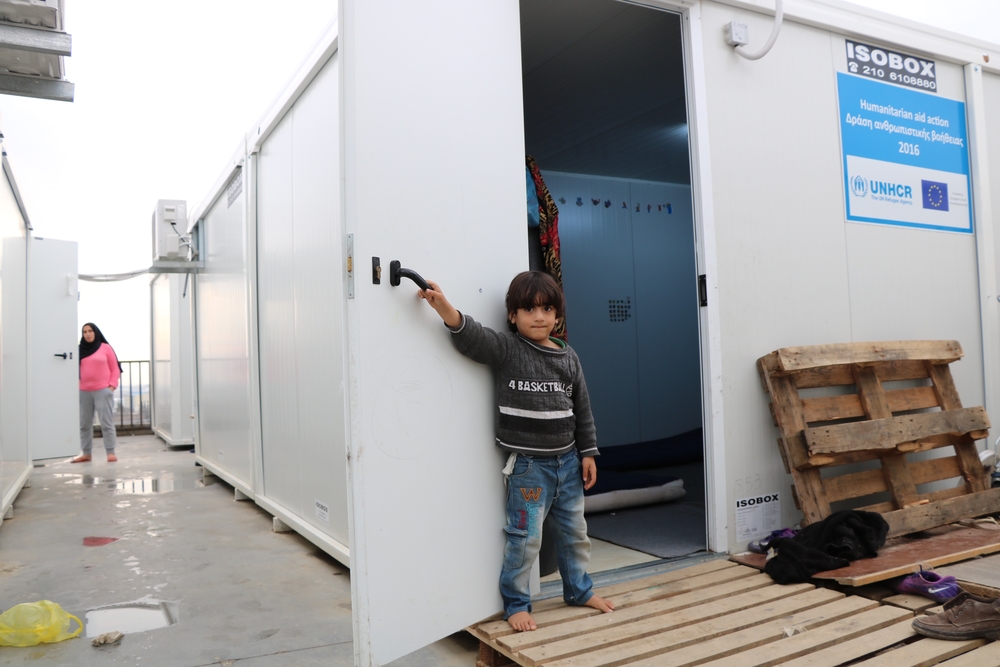 Ahmed and Ramia have also applied for their family to relocate to Germany, a process that may take many more months. In the meantime, they’re enjoying the privacy and space of their apartment, but they aren’t enrolling their children in Greek schools or putting down roots. They want to start new lives in Germany before doing that.