A thin, dark column of figures winds across the barren hills on the outskirts of west Mosul, through clouds of dust thrown up by mortars falling around them. With wide, fearful eyes in faces drawn from months of malnutrition, some stagger out of exhaustion or hobble in broken plastic sandals. Others walk barefoot. Many women carry young children or are heavily pregnant. Aged grandparents are pushed across the rough terrain in rusty wheelbarrows or makeshift carts.

These are the desperate displaced people now fleeing west Mosul, as the Iraqi army fights off so-called Islamic State in the group’s last stronghold in Iraq.

After almost three years of terror under IS, four months of living on the verge of starvation since the fight for Mosul began, and three weeks of intense fighting as the Iraqi Army and its allies advanced into west Mosul, the humanitarian situation inside the city has become so dire that families have little choice but to risk their lives by walking through the front lines of the conflict just to try and survive. 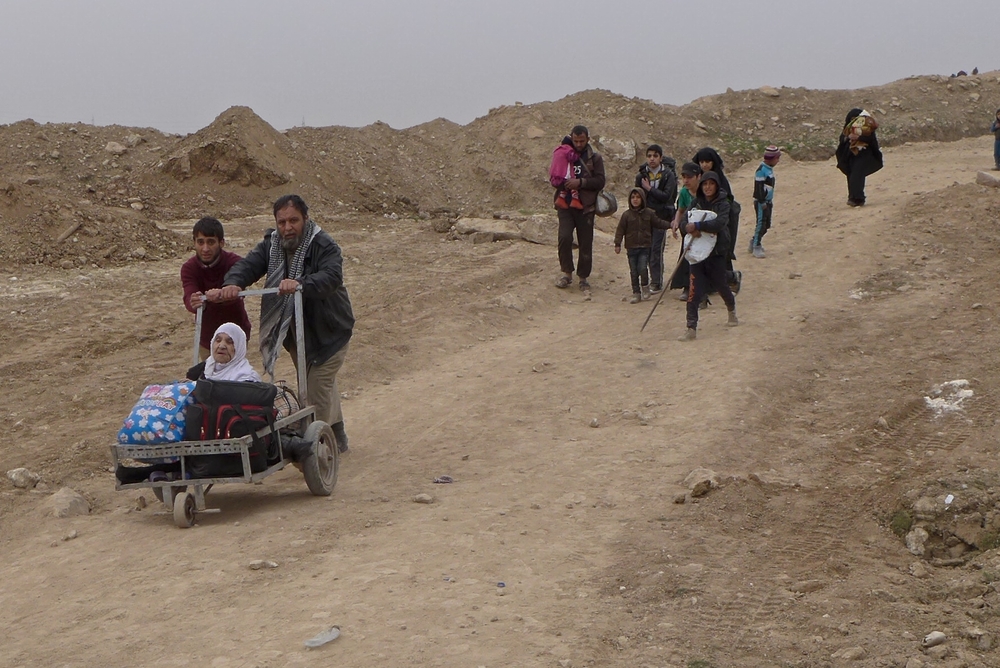 “Look at us. We are a destroyed people,” says 67 year-old Mohammed, resting in the sand with his family. After nine hours of walking, his ailing wife can go no further, even though they are still within range of IS mortar strikes. They have another half-kilometre left to walk, to reach the relative safety of an Iraqi army checkpoint in the Khaslani district of southwest Mosul.

“We have had only bread and water for four months and we have become very weak,” his daughter Nadia explains. Cradling her youngest child, just two months old, she says living off such a poor diet had left her unable to produce breast milk. “There was nothing to give my baby except water and I cried every day, fearing he would not survive.”

That residents are willing to risk the treacherous flight out of IS-controlled west Mosul betrays just how terrible conditions are inside the city, with food, drinking water and medication in extremely short supply. Residents have for months been forbidden to leave by IS. Those caught trying are harshly punished or executed in public.

Terrified of being caught and executed, Mohammed says his family postponed the journey until the fighting around them became too intense. “We were hiding in a school and then a big [military] operation started and mortars were falling everywhere, on so many homes,” he recalls. “My cousin’s house was hit by an airstrike and collapsed – the bodies of his family are still there under the building – and we realised our only options were to risk death to try and escape, or stay and starve to death, or be killed in the war.”

“They are killing families who are caught fleeing,” whispers another escapee, Shayma, 22. “One family tried to escape a few days ago – a man and his wife – and I saw Daesh shoot them,” she says, using the Arabic acronym for the group. Speaking from the registration centre and screening point in the al-Akrab district on the main Baghdad-Mosul road for internally displaced people (IDPs) from west Mosul, she describes how militants stormed into her village four months ago, forcing all its inhabitants to move into the city.

“They made us go to Mosul at gunpoint and live in empty houses so they could use us like human shields when the fighting started,” Shayma says. “And in these four months we have seen the worst things anyone could see in their whole lives. I wouldn’t wish it on anyone.”

Leaving in the early hours of the morning in an attempt to slip past IS fighters unnoticed, the walk to freedom from southwestern Mosul, through the front lines, takes most families up to 12 hours. Iraqi special forces manning the Khaslani checkpoint on the outskirts of southwest Mosul say several thousand IDPs are arriving each morning: The UN estimates the total flight is at an average of 4,000 people a day. 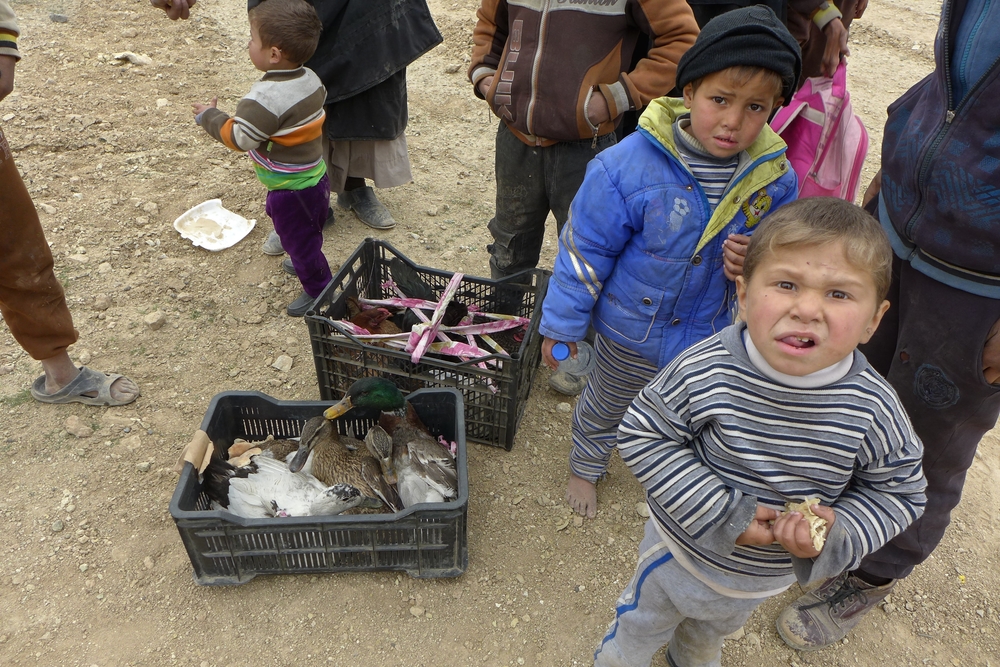 “There were more than 1,000 this morning even before seven o’clock,” explains Ali, a special forces soldier. “The road was black with figures because the trucks didn’t come until later.”

Ali helps shoeless children through what was once a dusty track but is now, after two days of rain, just mud. Soaking wet, with teeth chattering, the new arrivals clamber into army trucks and gratefully accept water, bread and biscuits distributed by volunteers who support the Hashd al-Shaabi (Popular Mobilisation Forces), a group of fighters allied with the Iraqi army.

“There was no food except bread in there for months and my children are so thin and sick,” says Younis, 36, pointing to his two pairs of twins, cowering wide-eyed in a corner of the truck. “It took us just over nine hours to get here. The walk was okay for me, but it was very tough for my kids, and their shoes kept falling off and getting stuck in the mud.”

His wife left separately the same night, with his third and youngest set of twins, so they would not all be caught and punished together. The previous day, they had watched on in horror as IS militants caught a man trying to escape. They cut his arm off at the bicep.

Younis has no idea if his wife and and youngest children made it out, and desperately hopes to find them later at the camp where they are headed.

“We had wanted to leave for ages, but we had to stay to look after my father who had cancer,” he explains. The injections his father needed for treatment cost $180 per shot before supplies ran out altogether. He died 10 days ago and the family immediately began to plan their escape.

“I was very scared for my children in case something happened to them there or on the way out,” Younis recalls. “But we could not stay any longer because we risked starvation or worse. For almost a month we have been without electricity or fuel. There has been no water for more than a fortnight.”

More than 50,000 people have so far fled the western sector of Mosul, a figure the UN refugee agency, UNHCR, told IRIN was much smaller than their original estimate of 700,000 civilians inside west Mosul. At least one agency put the number of civilians still inside at around 400,000.

From the checkpoint, IDPs walk or are transported in trucks to an open-air screening centre where identity cards are checked against a database held by the Iraqi army. It lists thousands of names of suspected IS members and affiliates. Most days a handful of arrests are made, usually of men. 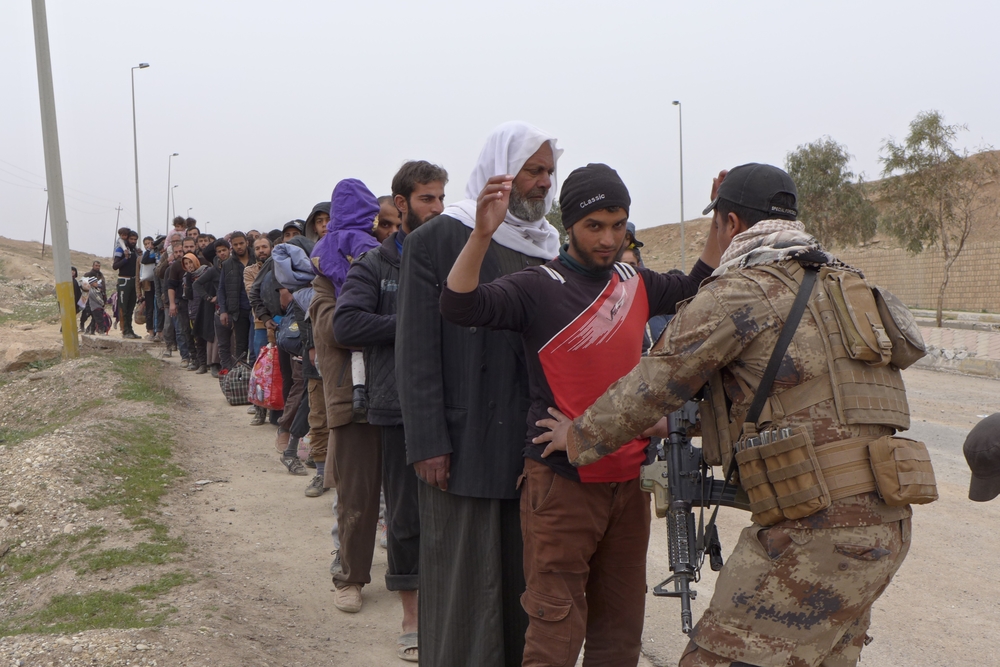 After this initial screening is complete, displaced families are transferred to camps set up before the west Mosul offensive began, to register and undergo further screening procedures. This process has been fraught since the start of operations against IS – with serious abuses alleged in the past – and the UN has said that family members are sometimes not informed of the whereabouts of their male relatives.

Within a week of opening, the nearest, purpose-built camp in Hammam al-Alil – designed to accommodate 22,000 people – was full. But the commander heading the Iraqi military team running security for the camp, who gives his name only as General Bashar, insists: “We were prepared for all these people.

“Even as we’re talking, we are building an extension camp for another 1,000 places and we have plans for a third area to house 5,000 people.”

But even with his conservative estimate of 3,000 new daily arrivals – 1,000 less than the UN’s figure – new camps cannot be built fast enough.

“We have seen a large spike in the number of displaced families leaving Mosul in the last week. On average, we are seeing around 4,000 leave every day,” says UNHCR spokeswoman Caroline Gluck.

“Humanitarian agencies are working around the clock to assist desperate and traumatised families leaving Western Mosul,” Gluck adds. “UNHCR staff and partners have been working flat out, including over the weekend, to ensure distributions are speeded up and work to build new sites continued – even though the heavy rains and mud for two days prevented much construction work from taking place.”

UNHCR efforts to open new camps have been hampered by difficulties in finding suitable land for these, either because of topographical reasons, access to water sources, or because of disputed land ownership.

Until these new camps and tents are ready, General Bashar said IDPs would be taken in buses to east Mosul camps, from which some are starting to return to their homes in liberated areas of the city.

Whatever humble accommodation awaits the displaced thousands from west Mosul, most are just thankful for their lives and liberty.

“I can’t believe we got here today. I still just can’t believe it,” says Younis, still searching the figures of IDPs coming down the hills for his wife.  “We waited so long to get out. The situation in there is terrible and there are still so many people left inside. The old people can’t manage this walk and they are stuck in there, starving, with mortars falling everywhere,” he continues, tears rolling down his face.

A Hashd al-Shaabi volunteer wipes Younis’ tears away with his thumb and lights him a cigarette. “We thank God that we are here, alive, today,” Younis says, inhaling deeply.

(TOP PHOTO: When no military vehicles are available at the checkpoint, there are more kilometres to walk until the IDP screening centre. Tom Westcott/IRIN)