Boko Haram is on the run, and much of the credit must go to vigilantes in northeastern Nigeria who have risen up to protect their local communities from the jihadists. But there is a growing concern that they represent a whole new security threat.

Abba Aji Khalli is an auditor employed by the Borno State government in Maiduguri, the birthplace of Boko Haram.

In June 2013 he was one of the first to join the “Civilian JTF”, a vigilante group that armed itself with machetes and ancient single-shot hunting rifles to protect the city when the military appeared overwhelmed by the challenge.

A year later, when the militia helped finally drive Boko Haram out of Maiduguri, Khalli was at its core, leading what he claimed was an 8,000-man unit.

“They are children of necessity because they were formed to fight insurgents,” the 52-year-old said of his troops.

Key to the vigilantes’ success is that they know who is and isn’t Boko Haram in their individual neighbourhoods. There was a degree of support for the insurgents in the early days; a sense that they were “our boys”, especially when the floundering military’s strategy was no more sophisticated than indiscriminate arrests and collective punishment.

But Boko Haram was even more severe. Anyone not with them was regarded as a potential target, even the most pious Muslims. They killed with impunity, and their vindictiveness finally succeeded in turning the community against them, led by Maiduguri’s middle classes.

All in the name

The name, the Civilian JTF, was an implicit recognition of their allegiance to the security forces, then known as the Joint Task Force, or JTF for short. The self-defence units acted as the eyes and ears of the military, but also took direct action, ruthlessly dealing with alleged Boko Haram cells in the community.

"So, I ask, ‘what about the youths who have sacrificed their lives to protect Nigeria’s integrity?’”

Human rights groups have documented serious violations by the militia, including the summary execution of people identified as Boko Haram, as well as their participation in extra-judicial killings by the military.

The battle for local control was so vicious that Boko Haram made it a point to set an example in towns where the Civilian JTF was active. Bama, for example, was destroyed when the army and militia defenders were finally overcome.

The state government was quick to embrace the militia, officially known as the Borno Youth Association for Peace and Justice. It provided training to a small cadre of volunteers, some vehicles, and occasionally a small stipend, but no weapons in any systematic way, apparently concerned it would not be able to keep track of them.

As the war comes to a close, the authorities are aware that it’s the vigilantes who’ve been at the forefront of defending their communities now present a new challenge. The state government has officially registered some 3,000 young men, but the real size of the militia is estimated at around 30,000 – and not all of them are local heroes.

Apart from the killings, Civilian JTF is accused of sexual abuse and exploitation, especially in camps set up for people displaced by the fighting. Because of their links to the security forces, they have tended to act as if they are “above the law”.

Khalli has returned to the security of his job as a government auditor. But a large percentage of his men were, at the time they joined the Civilian JTF, either unemployed or small-time street traders and hustlers – the same ranks Boko Haram drew from.

Where is my reward?

They will be looking for some reward for their service, and in a country in which disgruntled and unemployed youths routinely offer themselves to politicians – and anyone else willing to pay – as thugs for hire, they pose a real threat to stability. 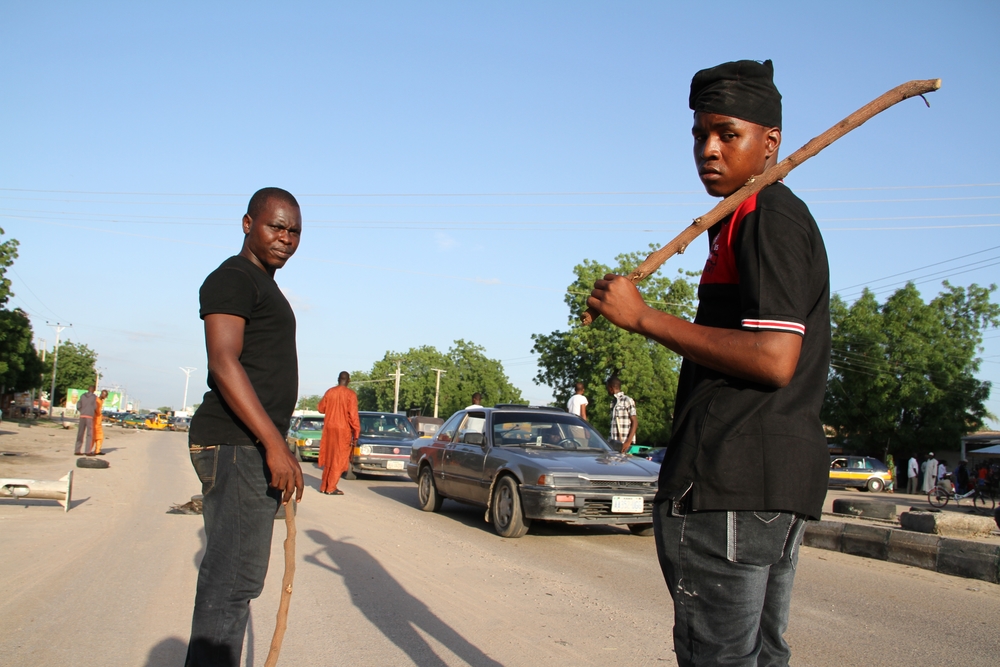 Last December, Borno State Governor Kashim Shettima made this frank assessment: “Unless deliberate efforts are made towards addressing issues of unemployment, illiteracy, hunger and extreme poverty, the CJTF will be the Frankenstein monster that might end up consuming us.”

Some moves have been taken to try to nip the problem in the bud. Last year, Borno state legislators passed into law a Youth Vigilante Empowerment Scheme. Currently, 1,850 Civilian JTF members are signed up as beneficiaries of the free medical aid and $75 monthly stipend.

The army has recently inducted in 250 ex-militia members and the Department of State Security has absorbed about 30 others, but these are tiny numbers.

There have long been calls for a state police service to absorb the rest of the men, but it is a contentious issue across Nigeria. The undermanned federal police force has failed woefully to provide law and order but there are fears that local politicians and businessmen could seek to more easily manipulate state police to their advantage.

But as the army continues to recapture territory from Boko Haram, calls for a state police force to help fill the security vacuum and protect the displaced returning home have only grown louder.

In the interim, Fati Abubakar, a Maiduguri-based journalist, believes the Civilian JTF should act as the main community defenders. “There are possibilities for them to become protectors of the community after the military leaves,” he told IRIN. “It’s imperative that the government engage the youth in productive activities. Idleness is dangerous.”

Khalli, the vigilante leader, agreed but said the federal government must help also, and should be sued if it doesn’t.

“The state government has a lot of responsibilities and can’t do it alone…. Engagement should begin from now, because knowing Nigeria once the war ends we will all be forgotten.”

Christiana Wakawa, who works at the Centre for Entrepreneurship and Development at the University of Maiduguri, has another concern. “The government needs to get them [the vigilantes] into therapy first,” she told IRIN. “They have seen so many things in war so they need to learn new skills or else they’ll keep using their wartime skills.”

People in the northeast see a double standard over how earlier unrest in Nigeria’s oil-rich Niger Delta was managed, and are calling for similarly generous terms.

In 2009, the government granted an amnesty to some 10,000 young men who had taken up arms to demand a fairer share of oil revenues for the region. It included demobilisation and training programmes, and a shower of money.

Khalli questions why the delta militants – who killed Nigerian soldiers and whose sabotage of oil facilities damaged the economy – were placated, while his men risk being abandoned.

“I ask the federal government: ‘between Niger Delta militants and my boys, who are more responsible? Who ought to be taken care of?’” he told IRIN.

“Government has given them scholarships, jobs, and billions of dollars. So, I ask, ‘what about the youths who have sacrificed their lives to protect Nigeria’s integrity?’”