The Pope's visit to this capital city on Sunday is, in his own words, motivated by his desire to “contribute to the dressing of the wounds and opening of the way to a more serene future for Central African Republic and all its citizens.” His trip comes almost three years after a rebel coup that continues to reverberate violently in different parts of the country.

Among the most affected places are Bangui and the towns of Bambari, in the south, and Batangafo, in the north.

In March 2013, the Seleka – a predominantly Muslim alliance of northern insurgent groups who had launched an offensive the previous December – reached Bangui and staged a coup, leading to the establishment of an interim administration. The Seleka’s abuses against civilians prompted armed opposition in the form of ‘anti-balaka’ self-defence groups, and a wave of sectarian violence in a country that is 80 percent Christian.

More than half the country’s 2.3 million inhabitants are in “dire need of urgent humanitarian assistance,” according to OCHA, the UN’s aid coordination body. About a million people are displaced, either internally or living as refugees in neighbouring states.

For most of this year, the capital enjoyed relative calm. But since late September clashes have left at least 90 people dead and forced some 40,000 people to flee to safer places. Many headed back to a camp at the city’s airport, whose population grew from 7,000 to 22,000. There are now some 32 sites for displaced people across Bangui. 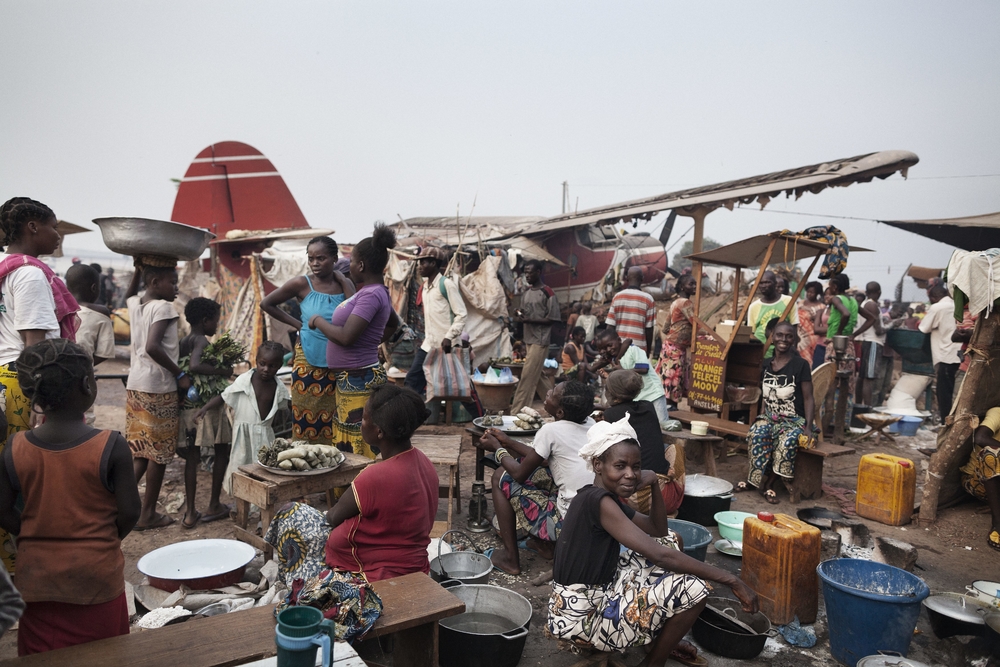 Not a week goes by in Bangui without armed violence – including robberies – leaving people dead. During the most recent clashes of 26 November, two people died during fighting between two rival anti-balaka groups. On 22 November a further two people were killed. Families of the deceased said "armed men coming from PK5" (a Muslim enclave of Bangui) were responsible for the attacks.

See: Central African Republic goes back to square one

This renewed violence is making living conditions for Muslims still trapped in the PK5 enclave harder. As their situation had begun to improve, many started to return. But now, unable to go out, and with food prices quadrupled, many are finding it difficult to get enough to eat. Schools in the area have also been closed since the beginning of the crisis.

Despite the fighting, residents of PK5 are placing high hopes on Pope Francis’ visit to Bangui.

"We welcome him with open arms. He’s coming here not only for Christians. He’s also here for Muslims. The coming of the Pope is a blessing for us, " the mayor of PK5, Atairou Bala Dodo, told IRIN. "We hope that after the Pope's arrival, the situation will improve. Through his encouragement and prayers, reconciliation will take place."

Bambari : from model city to city of rebels

Located 350 kilometres from the capital, Bambari remained a model of social cohesion while the crisis in Bangui continued to smoulder. However, the once-peaceful town has become increasingly tense. "Bambari is tricky and unpredictable," an UN official in the city told IRIN. "Anything can happen at any time."

The city’s mayor, Abel Matipa, recently described Bambari as "a city that is dying, a city that’s turned sinister, turned into a battlefield complete with ghost neighbourhoods.” In May 2014, thousands of former Seleka rebels withdrew from Bangui with their arms and equipment and set up headquarters in Bambari. Feeling insecure in the capital, thousands of Muslims were "relocated" to the city. Meanwhile, anti-balaka forces closed in, securing the perimeter of the city before moving further inside.

Since then, the security and humanitarian crisis has continued and the city has been regularly shaken by deadly incidents and clashes between various armed groups, as well as by rebel attacks against civilians.

Recently, the situation has gone from bad to worse.

"The high number of displaced people demonstrates the severity of the disaster that has befallen Bambari," said Father Felicien, the Vicar of the Diocese of Bambari. "It’s become a tinderbox city."

A ban on weapons in the city imposed by UN peacekeepers, designed to boost freedom of movement by civilians and aid agencies is widely flouted. On 12 November, ex-Seleka (the group acquired the “ex” prefix after it supposedly disbanded in late 2013) militias launched another attack on a site housing displaced people. According to the UN’s refugee agency, UNHCR, three people were killed, 30 were wounded, and 40 huts were burned. UNHCR also reported that two pupils were murdered a day earlier in centre of the city.

The divide between Bambari’s Christians and Muslims is reinforced by the River Ouaka, which runs through the town, with communities from the two faiths living on opposite sides.

The economy has suffered as a result: farmers are too scared to venture out to their fields, and trade between Christians and Muslims is now virtually non-existent: Bambari’s central market has lain hopelessly empty for months. Many residents now rely on humanitarian food distributions.

On 10 November, displaced Christians used sticks and stones to kill a Muslim who had ventured close to their camp. In retaliation, ex-Seleka fighters mounted a punitive mission against the camp. According to Médecins Sans Frontières‎, 10 people were killed, “including an old woman who burnt to death in her hut. "

The medical charity also said that 730 huts and a youth centre were set on fire, while thousands of displaced people have fled to seek refuge at the UN’s base in the area.

There are several hundred ex-Seleka forces in Batangafo, some of whom extort money and goods from residents and travellers.

While the ex-Seleka stay in their well-known bases, the anti-balaka in the town are mixed up with the general population and in the camps for the displaced. “They are rife in the camps and use threats and extortion. They even set up courts to try people if they carry out certain acts," a UN source told IRIN.

A small contingent of UN peacekeepers has tried in vain to get both groups to disarm.

As of this month, almost 31,000 IDPs are living in six camps across the city.

See more from IRIN on the Central African Republic here.