After spending the summer rescuing migrants in the Mediterranean, a ship owned by an American millionaire will attempt to do the same in Southeast Asia. But the Migrant Offshore Aid Station could find itself sailing into a sea of trouble in a region where rules governing the rights of migrants and refugees are harsher and less clear-cut than in Europe.

First of all, the MOAS crew face a conundrum they did not have to deal with in Europe: where to take the people they find adrift on rickety boats? Unlike European countries, most Southeast Asian nations have not signed the United Nations Convention on Refugees, which grants people the right to claim asylum.

The reticence of Thailand, Malaysia and Indonesia to allow refugees and migrants to land became obvious earlier this year when thousands of people were left stranded at sea. They were Bangladeshis escaping poverty and ethnic Rohingya, a Muslim minority that lives under virtual apartheid in western Myanmar.

Thai and Malaysian authorities were investigating human smuggling and trafficking rings in early 2015 when they found jungle prisons along their shared border, and nearby graves containing the bodies of victims of traffickers. Hoping to avoid arrest in the subsequent crackdown, people smugglers and traffickers abandoned their boats, leaving at least 5,000 people adrift, according to the UN refugee agency, UNHCR.

In May, after initially pushing boats away from their territorial waters, Malaysia and Indonesia finally caved in to international pressure and agreed to accept some of the stranded refugees and migrants, but only provided they be resettled in another country within a year.

SEE: Lucky escape for Rohingya boys who took the bait

Contrast that situation with Europe. Migrants rescued from the Mediterranean are brought immediately to centres where they can receive medical attention and register their asylum claims.

It is unclear where MOAS plans to disembark any people it rescues in the Bay of Bengal or the Andaman Sea. Spokesman Chris Peregin declined to answer the question and did not respond to a second email.

“We are currently reaching out to all stakeholders in the region to discuss a way forward,” Peregin said, adding that “no other details can be made public at this stage”.

About 11,500 people have been rescued by MOAS in the Mediterranean, according to the organisation. The Malta-based initiative is the brainchild of Christopher Catrambone, an American entrepreneur who runs Tangiers Group, which does a booming business providing insurance to people working in conflict zones.

“You can’t just replicate the intervention in the Mediterranean here,” warned Chris Lewa, director of the Arakan Project, which advocates for the rights of the Rohingya. “No country allows disembarkation.”

If MOAS does attempt to disembark people, the crew could find themselves facing legal consequences, according to Lewa.

“No vessel carrying migrants and refugees can just enter territorial waters without permission because they could be arrested for trafficking people,” she said.

Representatives from MOAS are scheduled to meet with humanitarian agencies tomorrow in the Thai capital, Bangkok, to discuss their plans.

“Once the monsoon rains subside, tens of thousands of Rohingya and others are expected to resume their dangerous sea crossings,” Catrambone said in a 23 September statement announcing his intention to expand the MOAS mission.

The monsoon season is now in its final throes. In past years sunny skies have heralded a mass migration by sea from the coasts of Myanmar’s Rakhine State and southern Bangladesh. According to UNHCR, more than 94,000 people have departed these areas by sea since January 2014.

There is no evidence yet of the start of a mass migration, which was already apparent by this time last year, said Jeff Labovitz, chief of mission for the International Organization for Migration in Thailand.

"I do think people will try to go on boats again at some time,” he said. “I don't think it's stopped, but it's not likely to be the big explosion of people we've seen for the past two years in particular." 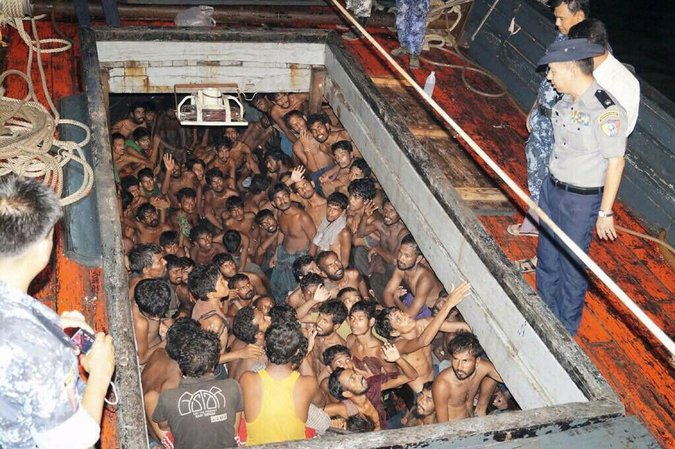 This year the situation has changed as a crackdown has – at least for now – driven people smugglers and traffickers underground. In addition to that, and the fact that the nations in question are not signatories to the Refugee Convention, there are further differences to migration patterns in the Mediterranean.

The distances people must travel by sea are much further in Southeast Asia. There is no “staging ground” like Libya, where people can go to make money to pay for the voyage, and the migration is not growing as it did in Europe with huge numbers of people escaping civil war in Syria.

Another major factor that could cut down on migration from Bangladesh is a labour agreement currently being negotiated with Malaysia, which is expected to accept half a million migrants from that country each year for three years.

"That would make redundant the need for people to go on the boats,” said Labovitz of IOM. "I think it's a very positive thing."

Myanmar, however, remains a wildcard. The results of an election scheduled for next month could create a push factor for Rohingya. While Rohingya were allowed to vote in previous elections, they have been disenfranchised this year.

Nationalist ethnic Rakhine parties will almost definitely sweep the elections in Rakhine State. That could be bad news for Rohingya, almost 140,000 of whom remain in displacement camps after being forced from their homes by mobs of Buddhists during two bouts of sectarian violence in 2012.

“The election is a significant event that could trigger a mass movement of Rohingya,” said Lewa.