Zahira doesn’t like to return to the site, a concrete slab which covers the entrance to the cellar where her twin brother Hassan hid.

“Most of us women and children went to camps at the border [with Uzbekistan], but the men stayed behind to protect our homes,” said Zahira*. Hassan was among them.

“I called him around noon and he said they were hiding in the cellar. I called again at 5pm and no one answered.”

Zahira returned the next evening to check the house. It had been burnt to the ground with Hassan and his four children still inside. They were all dead.

Next month it will be five years since that day – the peak of the 2010 ethnic riots in southern Kyrgyzstan known locally as “the war.”

Mobs of Kyrgyz and Uzbek youths clashed for days. The bulk of the damage was done to the Uzbek community, which accounts for only 15 percent of Kyrgyzstan’s national population but represents a near majority in southern cities like Osh and Jalalabad.

At least 418 people died, two-thirds of them Uzbeks, an ethnic group that has straddled the border of Kyrgyzstan and Uzbekistan for more than 500 years. Another 400,000 Uzbeks were displaced by the fighting, many of them seeking refuge in Uzbekistan.

Five years on, human rights inquiries have been quashed, those responsible enjoy impunity, while the Uzbek minority is still victimised. There is growing fear that the widening ethnic gap in southern Kyrgyzstan, along with a rise in Kyrgyz nationalism, could fuel another bout of clashes.

During the violence, more than 1,500 homes were burnt down in Kyrgyzstan’s second largest city of Osh. The middle-class Cheremushki neighbourhood, a leafy warren of narrow alleys and traditional single-storey Uzbek homes with courtyards, was one of the hardest hit.

“We wrote 'SOS' on the roofs and made roadblocks,” recalled Medina, a 35-year-old mother-of-three whose home was somehow spared. “The government didn't do anything. Some soldiers came with tanks and helped the Kyrgyz break down doors and enter homes, to kill people.”

Most homes have now been rebuilt with international aid, covered in fresh plaster and paint. Their shiny new aluminium roofs contrast with the old ones that still have “SOS” emblazoned on them in letters large enough to be seen from the air.

The violence came two months after a popular uprising in Bishkek ended in the overthrow of Kurmanbek Bakiyev, an ethnic Kyrgyz.

Police and security guards at the trial of Mahamad Bizurukov stand by while relatives berate and throw a shoe at the defendant during a hearing in Osh, Kyrgyzstan on June 5, 2013. 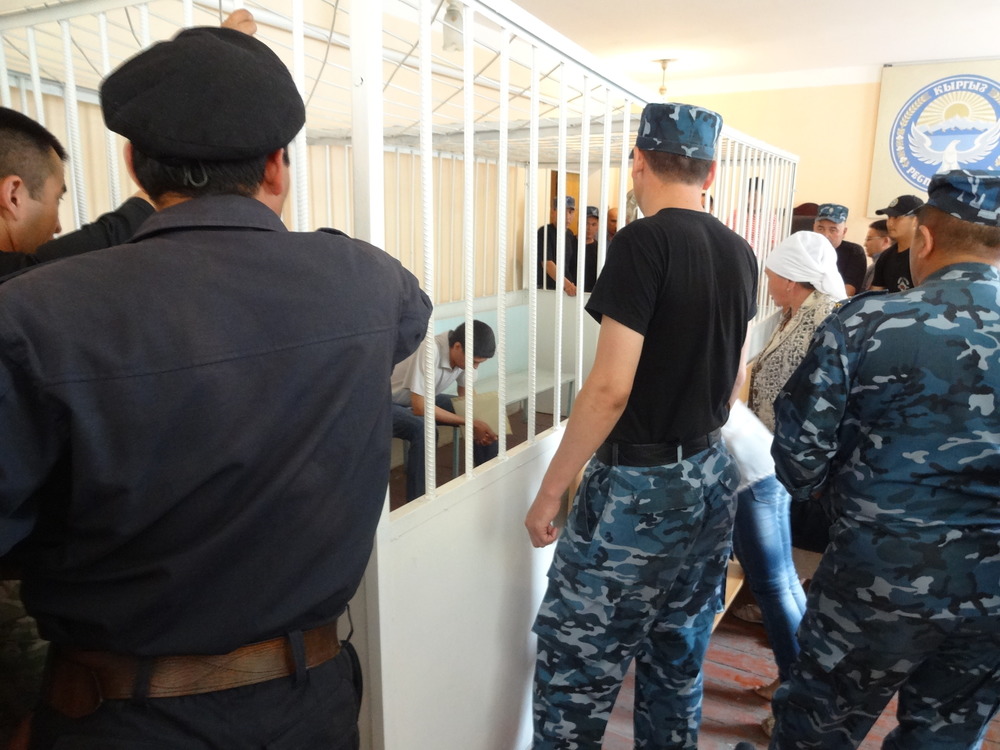 Seizing the opportunity to try to address decades of marginalisation, Uzbek political leaders called on the new government to recognise cultural rights and teach the Uzbek language in schools. These calls, in turn, stirred up Kyrgyz nationalist sentiment and allowed accusations that the Uzbeks wanted power only in order to secede to fester.

Isolated scuffles between rival Kyrgyz and Uzbek youths boiled over into open clashes, as each side mobilised supporters. The violence quickly became one-sided, with mobs of Kyrgyz youths marching on Uzbek neighbourhoods.

“We had never seen these attackers before. Many wore masks. They were like animals,” said 70-year-old Adina Khan, whose husband and daughter-in-law were killed by men in front of her family. “We have Kyrgyz neighbours. We still get along well with them. This was done by outsiders.”

According to several inquiries, thousands of Kyrgyz were brought into Osh in convoys, waived through security checkpoints meant to keep the clashes from spreading. Mobs that converged on eight military bases in the south found little resistance and walked away with automatic weapons, ammunition, sniper rifles, grenade launchers, and armoured personnel carriers.

Mihra Rittmann, a researcher with Human Rights Watch who has studied the clashes and their aftermath, told IRIN that while the government did take steps to try to contain the violence – declaring an emergency in southern Kyrgyzstan and sending in reinforcements to cities like Osh – those efforts proved largely ineffective.

Government officials have blamed the failure to stem the riots on a lack of necessary military equipment and the fact that the security forces did not have a mandate to use lethal force to stop rioters.

“[But] the evidence suggests that the authorities focused on disarming the Uzbeks, paying less attention to stopping the violence committed by the Kyrgyz or to the danger posed by thousands of Kyrgyz flooding into the city from nearby villages,” Rittmann said.

Islamic clerics in the region attempted to broker truces, but found emotions were too enflamed. “The fighting was political, started by people who were not local,” said Nurbek Muhammad, an ethnic Kyrgyz imam at Osh's central Imam al-Bukhari mosque. “We teach our students that Kyrgyz and Uzbek are brothers in Islam, and Muslims have no business killing other Muslims.”

But the narrative that Uzbek calls for secession were behind the violence has not gone away. In June 2014, on the fourth anniversary of the clashes, President Almazbek Atambayev repeated the assertion, saying “the enemies of Kyrgyzstan, taking advantage of the weakness of the government, fanned the flames of conflict."

“[Since 2010] Kyrgyz authorities have taken some steps to rebuild neighbourhoods that were damaged in the violence, and have undertaken some other efforts to promote stability and reconciliation,” Rittmann said. “But for many ethnic Uzbeks in the south, a feeling of vulnerability still persists.”

“The government opened a case, but they never arrested anyone,” said Adina Khan. The killing of her daughter-in-law Zarifa, like nearly all the deaths in June 2010, remains unpunished.

Six months after the clashes, more than 5,000 criminal cases had been opened related to the violence, but there were few convictions. By April 2012, 115 of 125 suspects being tried for murder were ethnic Uzbeks.

Since then, Bishkek has simply stopped reporting the outcome of prosecutions related to the 2010 clashes. The Kyrgyzstan prosecutor general, tasked with handling the cases, did not reply to IRIN’s written requests for comment.

Independent inquiries have subsequently found criminal proceedings were almost entirely focused on Uzbeks, the principle victims of the violence.

Human Rights Watch documented the use of beatings, suffocation, electric shocks, and other forms of torture against 65 suspects, nearly all of them Uzbeks, including one that resulted in death.

The failure to address grievances of Uzbeks in the south is a worrying prospect for human rights activists like Tolekan Ismailova, the head of Bir Duino, an organisation that was one of the first to document the 2010 violence. “Imagine, five years have passed and people are still awaiting justice,” Ismailova told IRIN.

Shortly after the clashes, Ismailova was forced to leave the country for several months. A prosecutor in Osh had accused her of distributing false information. Bir Duino's offices in Bishkek and Osh have been raided by the authorities several times in the past year and state television has broadcast documentaries alleging that the group is part of an American conspiracy seeking to destabilise the country.

Other rights activists have been handed lengthy prison sentences after they documented the clashes. In one prominent case, Azimjon Askarov, an ethnic Uzbek journalist and rights activist, was sentenced to life in prison in September 2010 on charges of inciting ethnic hatred and murdering a police officer.

During his trial, Askarov showed bruises on his back and said he had been beaten and tortured in police custody. Despite a number of legal challenges and campaigns from advocacy groups, he remains in prison almost five years later, still serving a life sentence.

“When police and security services target people like Askarov,” said Ismailova, “that is the kind of thing that actually gives rise to ethnic hatred.”

Lawyers representing Uzbeks have since been physically assaulted during court hearings by relatives of Kyrgyz victims. The head of an international inquiry commission formed at the request of Bishkek was barred from entering the country in May 2011, weeks after publishing its findings.

“Many Uzbeks – those who had the money – have simply left the country, for Russia or for other places,” Zahira, whose brother and family were killed in 2010, told IRIN.  “My Uzbek neighbours want to sell their homes and leave too, but Kyrgyz are offering them a very cheap price.”

“Uzbeks do not go to Kyrgyz restaurants, and they (the Kyrgyz) do not come to our (Uzbek) restaurants now,” said Yusuf, 19, an ethnic Uzbek who works at an Internet cafe in Osh. Yusuf's uncle was shot and killed during the 2010 clashes. His father, who had volunteered to protect their neighborhood, was also shot but survived.

Despite constituting a near majority in the south, Uzbeks have almost no representation in local government in cities like Osh, and none at all among judges or senior law enforcement officers, according to Ismailova.

Schools that offered Uzbek language lessons have been closed and this year Bishkek announced it would only offer college entrance exams in Kyrgyz and Russian, raising concerns that tens of thousands of Uzbek students could be cut off from higher education.

In the build-up to the 2010 ethnic clashes, thousands of rioters burned down the Friendship of Peoples University in Jalalabad, one of two colleges offering lessons in Uzbek. Today, there are none.

Lawmakers in Bishkek are currently considering legislation modelled from a 2010 Russian law that could force groups such as Bir Duino and Human Rights Watch to register as “foreign agents” if they are judged to be engaging in “political activities.”

“The formulation of 'political activities' in the bill is so broad that it could include any organised activity relating to public life,” Human Rights Watch's Rittmann told IRIN.

Most recently, Ismailova said, groups seen as sympathetic to ethnic Uzbeks have been accused of having ties to Islamic extremists. Hundreds of Kyrgyzstan’s citizens have travelled to Syria to join groups like the so-called Islamic State, and government officials have said 80 percent of them are ethnic Uzbeks.

* Like many people IRIN spoke to, Zahira requested her last name not be used for fear of harassment by local authorities.