If any further evidence was needed of the importance of ending the power struggle that has plunged Libya into chaos since last summer, it was the reminder this week that sympathisers of the so-called Islamic State (IS) are keen to exploit the resulting power vacuum. In a 27 January attack claimed by IS, gunmen stormed a luxury Tripoli hotel popular with UN officials and diplomats, killing at least nine people, among them five foreigners. It was the deadliest in a series of incidents, which suggest that IS supporters in Libya are growing more assertive as the country’s political crisis continues.

Armed groups allied to Libya’s rival governments - one a militia-backed self-declared administration that took power in Tripoli after the internationally recognised government of prime minister Abdullah al-Thani fled to eastern Libya – are locked in a battle for control of the oil-rich nation.

UN officials overseeing talks in Geneva aimed at uniting the warring factions hope the hotel attack will help focus minds. It might prove “a wake-up call,” said UN envoy to Libya Bernardino Léon, who argues only a unity government can tackle the IS threat. “The country is really about to collapse.”

That may be the case but the discussions in Geneva are still at a relatively tentative stage and many key actors in the conflict are not yet involved. Last week, participants including representatives of the June-elected parliament from both sides of the divide and civil society figures agreed on a framework which would seek a deal leading to a unity government. They also agreed on the need to stop the fighting and ensure the withdrawal of armed groups from urban areas. As no representatives of the armed factions are yet part of the talks – though the UN plans to include them - it is doubtful that an end to the armed conflict can be achieved anytime soon.

Bernardino Léon, Head of the UN Support Mission in Libya, has been desperately encouraging Libya's warring parties to negotiate 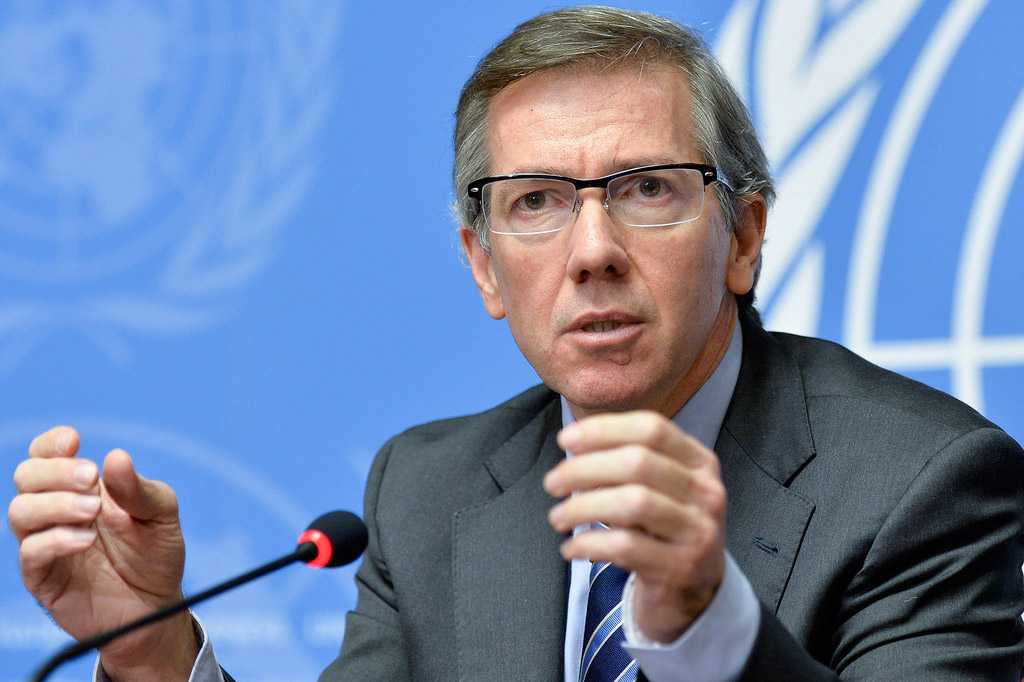 Months of fierce militia battles in several cities and towns have caused a severe humanitarian crisis. More than 120,000 people have been forced to flee their homes. Shortages of fuel and medical supplies have become particularly acute in some areas, especially Benghazi, Libya’s second city. “We’re running on empty,” said a doctor at Benghazi’s largest hospital. Around 600 people have been killed in Benghazi since October when the city was gripped by a fresh bout of fighting after Khalifa Hiftar, an ally of the Thani government, launched a new offensive. More than 15,000 families have been displaced. When the UN recently tried to broker a ceasefire to complement the Geneva process, Hiftar’s forces refused it for Benghazi where they believe they will soon prevail.

The dialogue begun in Geneva is expected have several tracks. In addition to the political track underway, this week representatives of municipal and local councils took part. Their participation is an acknowledgement that Libya’s crisis is a multi-faceted one with local conflicts feeding into the broader national power struggle. Meetings in the coming weeks are expected to include representatives of armed groups, political parties and tribal elders.

The challenge of such a process is deciding who to include. Power is diffuse in Libya and the two broad camps in the current crisis are built on loose and often shifting alliances of convenience between a myriad of political and armed factions. Many ordinary Libyans complain that real power appears to rest not in state institutions or elected bodies but in the constellation of armed groups that sprung up during and after the uprising against Muammar Gaddafi in 2011. Furthermore, each camp is increasingly beset by internal tensions and fractures, several of which have erupted into public disagreements including on the dialogue process itself. Notions of leadership and hierarchy can be nebulous and the influence of individual actors, particularly political figures, can ebb and flow depending on developments on the ground. The UN will have to bear all this in mind as the Geneva discussions evolve.

Key players to watch in the coming weeks will be political and armed factions from Misrata, a prosperous port city and power base of Libya Dawn, the militia alliance backing the Tripoli administration, and Khalifa Hiftar. Misrata, whose militias comprise the largest fighting forces in Libya, has the ability to make or break the dialogue but even it is divided. Many in the city, including prominent business figures aware of how the fighting has affected the economy, are supportive of the Geneva process but others are lukewarm or outright opposed. Hiftar has not clearly stated his position on the talks and he is likely to prove an obstacle to any agreement in the future. Hiftar hopes his support base in the east will help propel him into a leadership role but many in the opposing camp are adamant that he must exit the scene completely to ensure peace.

Ordinary Libyans caught in the middle are adopting a wait and see approach. Sceptics point out that they have seen several other attempts at dialogue falter over the past year. Most are fed up with the bloodshed and privations of war and the political bickering fuelling it. They see an economy in free-fall and the prospect of more Islamic State infiltration. A certain battle-weariness has crept in, even in Misrata. “We want to stop bleeding,” said Mohammed el-Tumi, a member of the local council attending the talks this week in Geneva. Another, a young man permanently maimed while fighting Gaddafi’s forces in 2011, was more blunt. “I pray that the Geneva dialogue will succeed,” he said. “War is hell.”