The World Food Programme (WFP) is facing a US$40 million deficit for its Afghanistan programmes, as aid agencies fear that foreign troop withdrawal will lead to decreasing budgets for humanitarian action.

WFP has already decreased the size of food packages for hundreds of thousands of people and the agency’s country head said that without more support they will have to take “dramatic” measures, which could including stopping assistance altogether for some groups.

US-led foreign troops are due to cease combat operations as part of their staggered withdrawal at the end of 2014, though thousands of troops will remain in the country in other capacities.

Yet humanitarian needs remain persistently high. The long conflict has left an ongoing security crisis that the delayed election of a new president has little hope of solving in the short-term. Nearly 5,000 civilians were killed in the first six months of the year, prompting the UN to warn this could be “Afghanistan’s bloodiest year”.

In total there are over 700,000 internally displaced persons (IDPs) registered with the UN, with thousands more registering every month - particularly in the southern region of Helmand where violence is intensifying.

Health conditions remain critical, with half of Afghan children malnourished. And with the winter approaching, approximately 2,500 families will face months of sub-zero temperatures without appropriate shelter, according to the UN Office for the Coordination of Humanitarian Affairs.

These needs have been exacerbated by the roughly 200,000 people who have crossed from neighbouring Pakistan into Afghanistan’s Khost, Paktika and Kabul provinces since June as the Pakistani military launched an offensive against the Taliban.

This heightened need has not been matched by increased support, with the budget for food particularly underfunded. So far only 34.7 percent of the $148 million requested by the UN for food security and agriculture in 2014 has been pledged, the lowest percentage of any cluster, according to the UN’s Financial Tracking Service.

For WFP, which provides emergency aid to the displaced families fleeing Pakistan as well as support for over a million Afghans, this is leading to increasingly tough choices. Claude Jibidar, WFP Afghanistan country director, said refugees and IDPs are now only receiving one wheat commodity instead of fuller packages that include pulses, oil and salt.

WFP has also reduced the amount of calories they provide per person from 2,100 to 1,500 per day. In total over one million people have seen their rations cut starting from October. “We have had to reduce the food ration that we can give them,” Jibidar said.

He added that part of the problem was that costs remain stubbornly high, with Afghanistan importing much of its food - 500,000 to 700,000 tons of wheat flour are brought in from surrounding countries like Pakistan, Kazakhstan and Uzbekistan per year.

Yet the root issue is funding - with the agency seeking $40 million to feed people this winter.

With acute needs and limited funding, Jibidar fears further cuts in the coming months and years. He said there was even a possibility that without more funding food aid would be cut altogether to some groups such as the Pakistani refugees. “That’s the whole drama of [it]… that people will wake up one day and we will not be able to assist them”

Fears for the future

WFP’s funding woes are part of a wider trend of declining support in Afghanistan. Ashley Jackson, an independent researcher and previous fellow at the Overseas Development Institute, said humanitarian budgets in Afghanistan had often been tied to military objectives since the 2001 US-led invasion. As foreign troops prepare to pull out, she said, fears of declining budgets are growing.

In 2010 the US committed tens of thousands of additional troops to the war effort in what was known as the “surge”. This was coupled by hugely increased humanitarian budgets.

A farmer spreads fertilizer on his newly planted wheat fields that have replaced his poppy crop in Mian Poshteh, Helmand Province 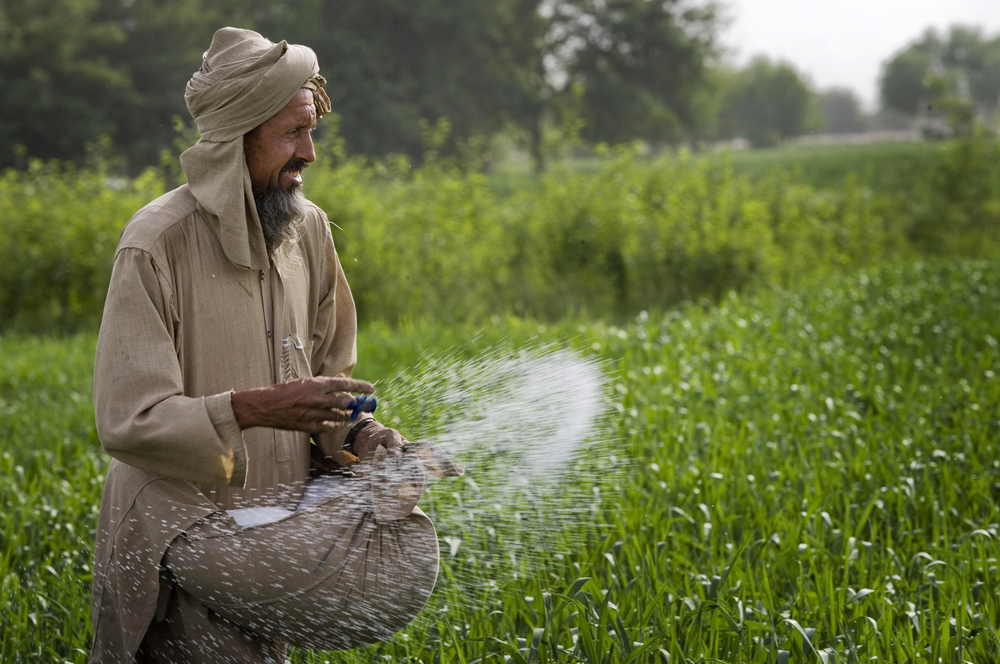 “We had this incredible increase in funding around 2010, with the surge… I think what we’re seeing over the past two years is that many donors - USAID [US Agency for International Development] among them and others - are cutting funding in Afghanistan.” She added that as humanitarian crises have grown in Syria, Iraq and elsewhere, Afghanistan has fallen down the global agenda.

Aid agencies are calling on international donors to show their support for Afghanistan even as they face ongoing crises.

“This year, in recognition that donors were unlikely to adequately fund a larger appeal, the UN lowered its humanitarian appeal by 14 percent,” said Danielle Moylan, protection and advocacy manager for the Norwegian Refugee Council, one of the largest organizations in Afghanistan. “The United States also halved its total assistance [including non-humanitarian funding] from $4 billion in 2010 to $2 billion in 2014, with most funding going to large-scale development projects.”

Jibidar added that he was also hoping to diversify funding for the Afghan appeal. In recent years Gulf states have become increasingly important aid powers and Jibidar said he was hoping they would increase their support for Afghanistan. “We have a lot of support from Western countries… but we are really looking forward to the support of the Gulf States.”

But Moylan said the bulk of funding was still likely to come from the West. “2015 is a year of truth for countries withdrawing militarily from Afghanistan - those who are leaving must step up and increase their humanitarian assistance.”