As the Philippines braces for a new season of cyclones, many in the centre of the country are still feeling the effects of Typhoon Haiyan, which devastated large parts of the area six months ago.

More than two million people remain without adequate or durable shelter, says the UN Office for the Coordination of Humanitarian Affairs (OCHA).

The authorities say an estimated 100,000 continue to live in tents. Many people have not started rebuilding their homes at all.

A field assessment of 3,525 affected households carried out by the Philippines shelter cluster, led by the government and co-led by the International Federation of Red Cross and Red Crescent Societies across eight provinces (Eastern Samar, Samar, Leyte, Cebu, Iloilo, Capiz, Aklan, and Antique) and released in April, indicated that only 15 percent of households were repairing or rebuilding their homes to a level where they felt they no longer needed shelter assistance, while 10 percent reported not starting the process at all.

By far the greatest proportion of households surveyed - 54 percent - reported reconstruction efforts as ongoing and said they needed additional support.

Most homes (55 percent) being constructed were described as “durable”, meaning the structure had a foundation, a clear exterior structure constructed of wood, and a roof that was permanent in nature, while 40 percent were classified as “makeshift”, meaning they did not have a firm foundation, and materials used for the walls or roof were usually salvaged from debris.

The Philippines (population over 100 million) experiences an average of 20 typhoons a year between June and December, with most striking in the months of September, October and November, though such storms are increasingly becoming more difficult to predict, experts say.

"The vast majority of survivors have started rebuilding, but they need additional support to complete construction," David Carden, head of office for OCHA, told IRIN, noting aid agencies are providing tools and materials, as well as training to mitigate storm risks.

To date, shelter partners have provided more than 130,000 households with roofing materials, including corrugated iron sheeting, fixings and tools, allowing for some 80,000 homes to be rebuilt or repaired. However, needs remain huge, with further support for another 370,000 people still needed.

“There is a looming mid-term crisis, because the level of funding that we have is not enough to cover the needs of the people,” Genot said.

As of 8 May, shelter cluster partners have only received 41 percent of the US$178 million funding requested. 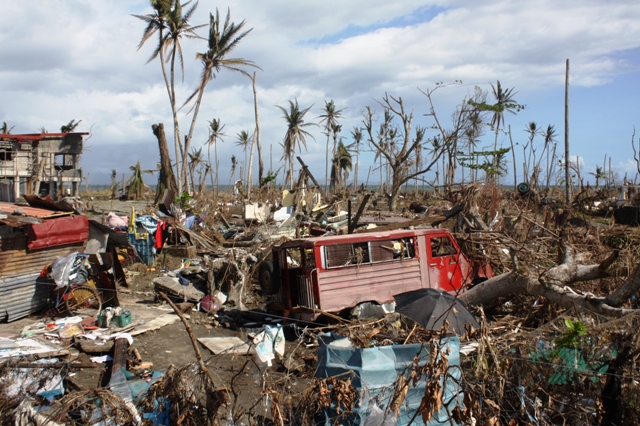 Meanwhile, questions remain over an earlier proposed ban on the construction of homes within 40 metres of the shoreline to reduce the risks of death or injury should another storm strike.

“Humanitarians are working with the government to ensure clarity on issues related to rebuilding, such as policies on no-dwelling zones on the shoreline to reduce the risk to life should another typhoon strike,” Carden said.  “In cases where relocation is required, it is essential that there is effective communication with the affected communities. People need to be given appropriate options.”

Although negotiations with the local authorities have made it possible to provide basic humanitarian support to those still living in “No Dwelling Zones” (NDZs), greater clarity is still needed.

"Uncertainty around NDZs, and what is or is not permitted in each community on the shoreline, has complicated humanitarian planning,” Carden added.

Shelter partners remain concerned about the temporary nature of assistance to people in these areas and the ad hoc preparations being made ahead of the upcoming typhoon season.

“I would like to rebuild, but I can’t. I don’t even know where to start,” said Arlyn Redona, 32, outside her tent in an NDZ near Tacloban. She lost her mother, three children and three siblings during Haiyan. “When it rains, we will be flooded,” she said.

Over 6,000 people lost their lives and more than 14 million were affected when Haiyan struck on 8 November 2013. Of the more than one million homes affected, 518,878 were totally destroyed and 493,912 were damaged, with schools, health centres, and other infrastructure severely damaged, the National Disaster Risk Reduction and Management Council reported.