On 17 March, 22-year-old Muhammad Yaqub got a notice from the authorities saying his mud-walled, thatch-roofed home in Pakistan’s capital city was scheduled to be bulldozed.

He lives in one of 18 illegal settlements which the Capitol Development Authority (CDA), a department under the Ministry of Interior, is planning to move or raze this month. The settlements, home to more than 80,000 people many of whom are internally displaced or Afghan refugees and migrants, have come under renewed scrutiny since 3 March, when gunmen and suicide bombers killed 11 people in a rare attack on a judicial complex in Islamabad.

“Where were they [the attackers] from? Where were they hiding?” said Shaista Sohail, who is overseeing the slum eradication programme, when asked if the attack prompted the latest push to clear the slums. “If you go to these areas, all kinds of clandestine activities are rife,” she said.

The demolitions were slated to begin on 24 March 2014, but after thousands of residents held a sit-in in front of CDA offices on 20 March, officials announced the clearance operation would be postponed. “We learned health authorities were planning a polio vaccination campaign [in the slums], so we have postponed the operation,” said Sohail, dismissing the impact of the backlash.

" We are sweepers, labourers, hardworking people, not terrorists. They don't arrest the real terrorists, who go around bragging about what they have done "

Residents of the slums say they are being blamed for the government's inability to provide adequate security for the country's civilian population, especially in the capital. They say the threat of eviction hangs over them whenever the government is faced with another embarrassing security lapse.

“They want to destroy these settlements... because they say they are terrorists,” said Mariam Bibi, a resident of one of the slums slated to be razed. “We are sweepers, labourers, hardworking people, not terrorists. They don't arrest the real terrorists, who go around bragging about what they have done.”

As part of an investigation into the attack, Pakistan Interior Minister Chaudhry Nisar Ali Khan ordered police to focus on the illegal settlements, which have been blamed for housing militants in the past.

“Many slums have sprung up around Islamabad. These people don't get registered, and this will inevitably create a law and order situation,” Khan told lawmakers last September. “There are many foreigners, mostly Afghan migrants, who have no identity card, no record - 98,000 illegal people, mostly foreigners, some with criminal records.” That statement came a day after militants in the northwest killed a senior Pakistani general, one of the highest ranking officers to be die in the decade-long war between the militants and the government.

Ibrahim, another resident who declined to give his last name, has witnessed regular police raids for years. “It happens every year, but this year we are more worried than usual,” he said. “The police regularly conduct raids, but don't find anything. They pick up 100-200 people at a time, check if anyone is an Afghan, then release them in the evening,” he said, adding that he was detained in such a raid last month.

“We conducted around nine major operations [in the slums] this year,” said a senior police official in Islamabad, declining to be named because he was not authorized to speak to media. “We always check them out, [finding] small-time criminals... The threat from the slums is not any higher than [the rest of] Islamabad.”

A history of displacement

Yaqub, whose family cannot return to their homes in the Federally Administrated Tribal Areas (FATA) because of fighting, is one of 8,000 residents of Afghan Basti, the largest of the Islamabad slums scheduled to be razed. He has lived in the slum all his life. 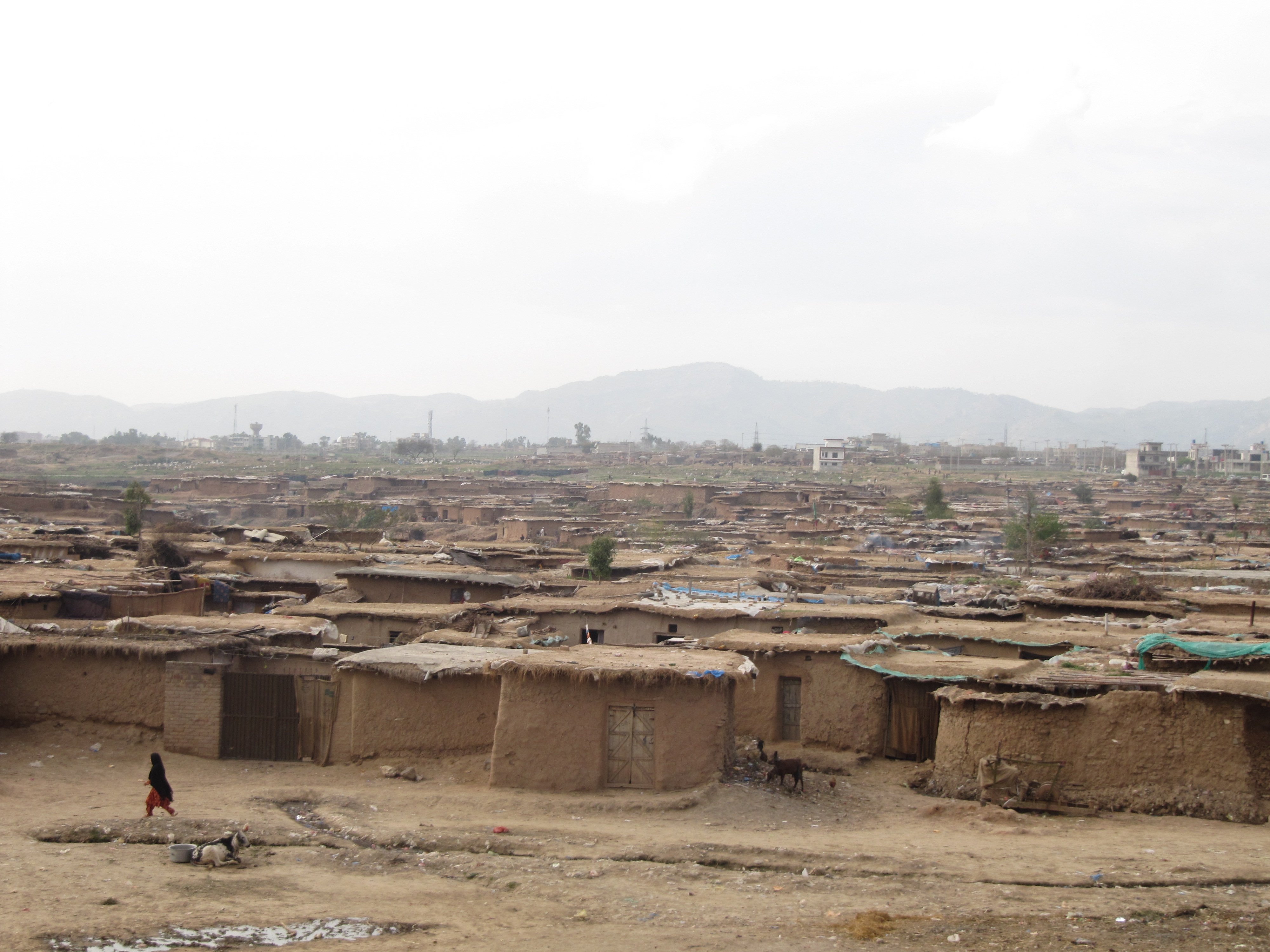 More than 1,000 of the slum’s residents are Afghan refugees registered with the UN Refugee Agency (UNHCR), while almost all the remaining residents are from Pakistan's war-torn northwest, according to a survey conducted by the CDA last autumn.

“Some people call every [Pashto-speaking] Pakhtun an Afghan, which is not true,” said Dunya Aslam Khan, a spokesperson for UNHCR in Islamabad. “Many of the people in [Afghan Basti] are internally displaced people from FATA and other areas. There is a trend of calling everyone an Afghan refugee.”

Badar Shah, a timber salesman in the slum, points out how the government has already recognized the legitimacy of their residence. “Why do they come to get our votes every five years? We have our own polling station,” he said.

Afghan Basti, which first sprung up to house refugees from Afghanistan in 1979, has been targeted for clearance before.

In 2005, then President Pervez Musharraf ordered settlements housing Afghan refugees across the country to be dismantled. Back then, Afghan Basti (literally “Afghan dwelling”) housed more than 50,000 refugees from Afghanistan, along with Pakhtuns from Pakistan's northwest.

Khan, the UNHCR spokesperson, says Afghans were given the choice of being repatriated to Afghanistan, relocated within Pakistan, or given land a few kilometres away from Afghan Basti. Around 5,000 of those Afghan refugees currently live in the new settlement, which UNHCR provides with basic services like water and health care. According to Khan, 34,083 Afghans registered with UNHCR live in Islamabad today, and 35,499 in the neighbouring city of Rawalpindi.

If evicted, most of the residents of Afghan Basti will have nowhere to go.

Fayyaz Baqir, director of the Akhter Hameed Khan Resource Centre, an Islamabad-based research group that studies Pakistan's fast urbanizing population, says the residents of slums like Afghan Basti could never afford rent. “These poor people make 7,500-10,000 rupees (US$75-100) a month,” he said. “Most of them, they live five to six people to a room, an entire family living in one room.”