A cessation of hostilities agreement signed by parties to the conflict in South Sudan has led to a considerable reduction in violence, although some fighting has taken place recently in Unity and Lakes states.

But the new country’s crisis is far from over - some 870,000 people have fled their homes since fighting began in mid-December - and it has implications well beyond the borders of South Sudan itself. Some of these aftereffects are explored in this article.

A key provision of the cessation of hostilities agreement is the removal of “allied forces invited by either side from the theatre of operations in the Republic of South Sudan.”

Three days after the signing of the agreement, however, Uganda’s military forces arrived in Malakal, South Sudan, according to the Small Arms Survey’s Human Security Baseline Assessment. In a recent press conference, Uganda’s foreign minister, Sam Kutesa, said that Uganda is “going to stay for as long as the government of South Sudan needs us.”

The Sudd Institute’s director of research, Augustino Ting Mayai, told IRIN that Uganda’s military involvement in South Sudan is directly related to its own interests.

“Uganda is a direct beneficiary of South Sudan’s stability,” he said. “It has minimized security problems related to LRA” - the Lord’s Resistance Army, a rebel group of Ugandan origin now more active in the Democratic Republic of Congo and the Central African Republic (CAR) - “and created thousands of jobs for Ugandans. Uganda is protecting its cake.”

The estimated number of troops Uganda has in South Sudan ranges from 2,000 to 5,000, including air support and tanks. According to a recent Enough Project report, Uganda is also the largest troop contributor to the African Union (AU)-led mission against the LRA, with 1,000 to 1,500 troops stationed in areas of CAR and South Sudan affected by the LRA.

Uganda is a direct beneficiary of South Sudan’s stability. It has minimized security problems related to LRA and created thousands of jobs for Ugandans. Uganda is protecting its cake

If Uganda stays involved in South Sudan, the Enough Project warns, it risks “drawing military assets away from the counter-LRA mission.”

In an article on the Sudan Tribune, the Sudan Democracy First Group notes, “The military involvement of Uganda, approved by its Parliament, has given the conflict a dangerous regional dynamic and risks undermining the mediation efforts of the Intergovernmental Authority for Development (IGAD), of which Uganda is member.”

In a letter to the AU’s Peace and Security Council, 27 civil society organizations warned that while “the international community focuses its attention on events in South Sudan, we fear that the Government of Sudan will be emboldened to further intensify its offensive in Darfur, South Kordofan and Blue Nile states, with deadly consequences for civilians”.

Since November 2013, the Sudanese military’s renewed offensive against rebel groups in these three areas has stressed the humanitarian situation in a country already scarred by years of war. In Darfur, over 450,000 additional people were displaced last year, according to the International Crisis Group (ICG).

“[The government] may also exploit the current crisis in South Sudan to undermine ongoing mediation efforts led by the AU, for example with the SPLM-N,” the letter added, referring to the Sudanese rebel group which, before South Sudan seceded in 2011, was a wing of the insurgency that became the political party now in power in Juba.

The Enough Project’s recent Forgotten Wars report says recent fighting in South Kordofan has forced 25,000 from their homes, and over 200,000 Sudanese refugees are seeking refuge across the border in South Sudan.

Akshaya Kumar, the Sudan and South Sudan policy analyst at the Enough Project, warned in an interview with IRIN that this has serious cross-border implications.

“All of the regions are facing increased violence and hostilities, but the Sudanese refugees from South Kordofan's Nuba Mountains, who live in Yida [site of a refugee camp in South Sudan], are likely feeling the impact of South Sudan's conflict the most since the fighting has resulted in significant shifts in the way that they get services and assistance,” Kumar said. “They are trapped between two war zones.”

The International Peace Information Service (ISIP), which recently mapped conflicts along the Sudan-South Sudan border, explains that the recent fighting in South Sudan is “having a profound impact on North-South relations and, by extension, the border dynamics. In this case, the conflict between President Kiir and Riek Machar led Khartoum to opt for increased cooperation with the incumbent regime. Intra-SPLM tensions had been palpable before this point, generating impacts on conflict in the border region.” 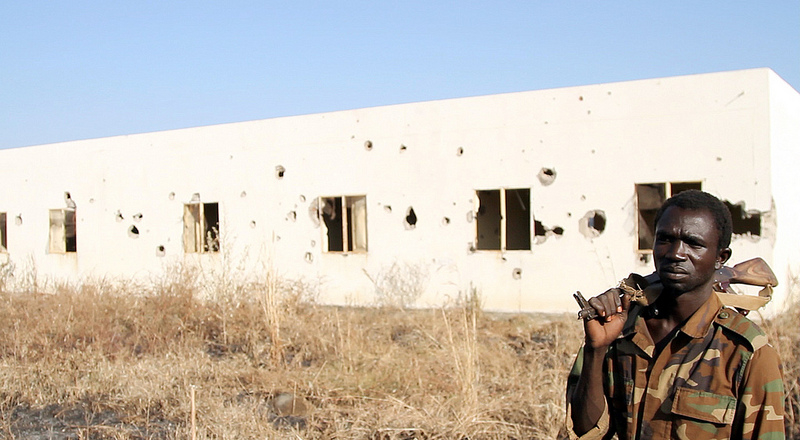 Not only is this affecting inter-state and communal relationships in the border, such as trade and pastoral movements, but the Small Arms Survey reported that the SPLM-N was involved in the fighting in Malakal, raising concerns that South Sudan’s conflict could re-shape the dynamics among rebel groups.

Since, as the Sudd Institute’s Mayai pointed out to IRIN, “Khartoum is as critical to Juba as Juba is to it,” and “instability in either of the states means instability in the other,” then not only are conflict dynamics related, but peace processes are similarly intertwined.

“Most worryingly,” the Sudan Democracy First Group warns in their article, “the talks in Addis continue to reproduce the worst historic trend of Sudanese negotiations: they only include the armed actors, and South Sudanese society has a very little role, other than to suffer the consequences of the violence and their so-called leader's political aspirations.”

Kumar, of the Enough Project, suggests, “South Sudan's peace process should definitely be informed by our past experience in Sudan, particularly on the need for a comprehensive approach, a national dialogue instead of stove-piped negotiations, and inclusion of civil society stakeholders.”

Exploring the same theme in a recent Foreign Policy article, George BN Ayittey wrote: “The track record for face-to-face negotiation in post-colonial Africa - and in Sudan itself - is abysmal. Instead of trudging down the same, well-worn path toward failure, South Sudan should look to traditional modes of conflict resolution to end the current standoff.”

Similarly, Sudan can learn from the South Sudan’s experience to address its own internal conflicts, particularly how the failure to give concessions can harden opposition to the regime.

Jerome Tubiana, senior Sudan analyst at ICG, said, “If Khartoum realizes that military action in South Kordofan, Darfur and Blue Nile is as useless as a proxy war with South Sudan, and if pragmatic views on South Sudan extend to the war areas in the north, the government in Khartoum now has an opportunity to launch a genuine national dialogue.”