Sri Lankan military officials have confirmed that the “final phase” of landmine clearance in the conflict-affected parts of northern Sri Lanka will take another two or three years.

“What remains to be cleared are the difficult stretches. This requires special skill and time, as they are demined manually, with minimum use of machines,” Sri Lanka’s military spokesman, Brig Ruwan Wanigasooriya, told IRIN.

The Minister of Resettlement, Gunaratne Weerakoon, said, “Facilitating resettlement and solving livelihood issues were our twin priorities. Demining has now reached its final phase and people can enjoy complete return to normalcy then.”

Using machines and specially trained dogs, the demining teams have been working in former rebel-controlled areas since the Sri Lankan military declared victory over the Liberation Tigers of Tamil Eelam (LTTE), who had been fighting for an independent Tamil homeland for more than two decades.

By the time the civil war ended in May 2009, the country’s northern and eastern districts were littered with landmines, unexploded ordnance (UXO) and improvised explosive devices (IEDs), and hundreds of thousands of people had been displaced from their homes, said the UK-based Mines Advisory Group (MAG).

Based on non-technical surveys in 2010, 10 districts were initially earmarked for demining - Mullaitivu, Kilinochchi, Mannar, Vavuniya, Jaffna, Trincomalee, Batticaloa, Ampara, Polonnaruwa and Anuradhapura - covering an area of 6,269 sq km, or more than three times the size of Luxembourg. Hundreds of thousands of landmines and other UXO have been removed or destroyed in the process.

Demining operations were conducted by the Sri Lanka Army (SLA) in collaboration with foreign and local agencies. Areas earmarked for resettlement were cleared by 2012, but some areas under cultivation are still mined.

“The remaining areas are the most difficult to clear due to their topography, which includes shrubs, jungle and mangroves. They have to be manually demined,” said Wanigasooriya. “Demining is never 100 percent safe, irrespective of the safeguards… Manual demining is… necessary to clear areas that are considered difficult to [demine] mechanically… It naturally slows down the rate of clearance.”

At the end of 2013, approximately 84 sq km of mostly jungle and mangroves in the island's north remained to be cleared, according to data from the National Mine Action Centre (NMAC).

Thangeswary Karuppaiyah, a 55-year-old grandmother and recent returnee to Kilinochchi District, has lived in transitional for more than three years 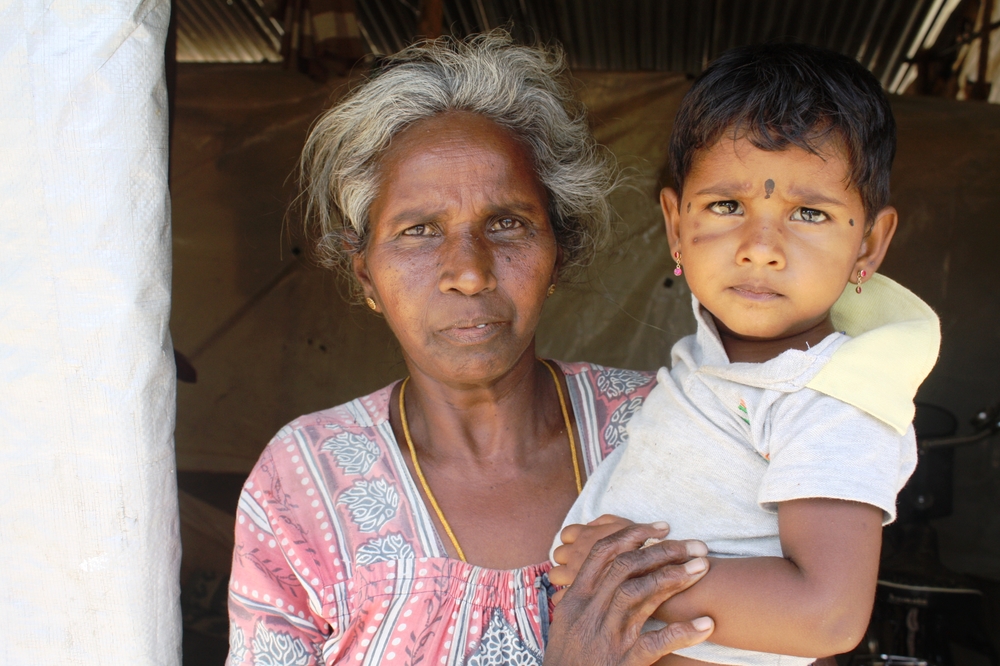 “The progress of this phase is unpredictable in terms of time and the rate of clearance,” said Wanigasooriya, describing it as an “inch by inch process” due to the time-consuming manual demining operations.

“Manual demining is a must for thick-forested areas or areas with shrubs and mangroves. As the process nears completion, the progress has somewhat slowed down,” said Jaideep Singh, a former member of the Indian demining team, Sarvatra, which concluded its mine-clearing operations in the island’s north in 2013.

L/Cpl Priyath* is carrying out manual demining in Mullaitivu District, one of the most contaminated areas in the north. Manual demining is riskier, so he carefully clears the soil inch by inch, using only a metal detector. “It can be a tedious task. There is a lot of emphasis on our safety. We wear protective equipment consisting of a helmet and jacket, but the area below the knee is vulnerable to injury,” he said.

“Demining work begins around 6 a.m. in the hazard area,” said Wanigasooriya. “Assigned teams of two members clear a demarcated area of 25 metres depending on the concentration of mines, especially if there are buried anti-personnel mines. The success rate depends on not just the low concentration of mines but also [on] soil and weather conditions.”

According to the Sri Lankan military, over the past four years there have been 593 civilian landmine injuries, but no deaths, while the Landmine and Cluster Munition Monitor, an initiative providing research for the International Campaign to Ban Landmines, reported five fatalities in 2012.

*Not the real name