Despite donor funding to advance Myanmar’s healthcare system, experts say more work is needed in life-saving family planning services, which have yet to receive the support they need.

Malene Arboe-Rasmussen, a spokesperson for the UN Population Fund (UNFPA) in Myanmar confirmed that: “Long-term contraceptive methods are not easily available. Those barriers, compounded with financial constraints, lead to unwanted pregnancies and unsafe abortions.”

The UNFPA notes that 87 percent of maternal deaths occur in rural areas, with infrastructure and the lack of reproductive health access and awareness as contributing factors.

“Many women in Myanmar don’t have access to the full range of family planning choices and as a result there is a high rate of maternal mortality,” Sime said.

Family planning services, including contraceptives, can be used to improve women’s health, but there are obstacles to making these services widely available.

“Although there has been great investment in healthcare professionals, including nurses, midwives and doctors, they are not all trained in family planning provision and there are regular stock-outs of family planning commodities,” Sime pointed out.

The unmet need for family planning in Myanmar stands at 19 percent, compared to only 3 percent in neighbouring Thailand, the UNFPA report says.

Official statistics put contraceptive usage at less than 40 percent, which Burmese officials hope to increase to 50 percent, as well as lowering the unmet need for family planning to 10 percent in the next two years.

The government considers Myanmar under-populated compared to other countries in the region and the authorities continue to back a pro-natalist policy that encourages childbearing, another UNFPA report notes.

Further challenges to family planning include security concerns in conflict-affected areas along the 1,800km Thai-Burmese border. There are also cultural pressures from conservative community and religious leaders who see large families as a blessing and view family planning as unnatural.

These traditions have strained the resources of already impoverished families that cannot afford more children, said Saw Nay Htoo, programme director of the Burma Medical Association, an NGO based in the Thai border town of Mae Sot, from where it provides services in eastern Myanmar. “If they have a big family, they will have less income and struggle to provide for their children.”

Saw Nay Htoo believes that family planning, education and services need to be expanded so as to reduce the burdens on Burmese families, especially in neglected parts of eastern Myanmar, where an estimated 80 percent of women have never used contraceptives, according to one report. 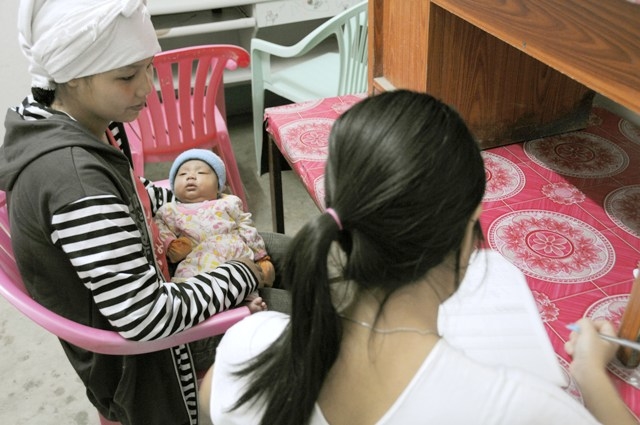 Without access to family planning, many Burmese women are forced to undergo homemade abortions or suffer obstetric emergencies as a result of dangerous pregnancies.

Terminating a pregnancy is illegal, and carries a prison term of up to three years for the provider and seven years for the mother, causing unsafe abortions to become one of the leading causes of maternal death.

Burmese women have often sought treatment and family planning services across the border in Thailand at the free Mae Tao clinic, located in Mae Sot. Every year more than 9,000 family planning visits are made to this health centre for Burmese migrants and displaced persons. The clinic also sees about 1,000 emergency obstetric cases, mostly for post-abortion care.

“Access to reproductive health and family planning is generally very low in [Myanmar],” said Cynthia Maung, founder of the clinic. “There needs to be a more comprehensive programme.”

In 2011, a multi-donor pledge of up to US$300 million was made to the Three Millennium Development Goal fund, with around two-thirds of the money allocated to maternal and child health from 2012 to 2016. Family planning coverage in townships already serviced by the fund is expected to increase by 50 percent.

However, there has been no strong commitment by the Burmese government, as the health budget is still dwarfed by defence spending, media reports say.

Rural areas in Myanmar, especially border regions where decades of conflict with ethnic rebels have only recently subsided, will likely continue to feel the brunt of the budget disparity.

“Even with ceasefires with the ethnic groups, direct support from the Burmese government is still not there,” Saw Nay Htoo said. “There is no concrete progress we can see.”