Under the glare of the midday sun, the neatly-arranged caravans gleam a bright white against the dusty desert terrain, their short symmetrical shadows disturbed only by an occasional piece of laundry hanging from a barred window.

There are none of the normal sounds you would associate with a refugee camp - construction, sizzling pans or hawkers’ cries - and apart from the rumble of the garbage truck and the periodic call to prayer, an almost muffled silence hangs overhead.

There is no smell of sewage either, no open drains; the sturdy power lines and satellite dishes dotted around give the air of an established town, not a refugee camp in the middle of the Jordanian desert that only opened six months ago.

People have dubbed Mrajeeb al-Fhood, run by the United Arab Emirates Red Crescent Authority (UAERC), a “five-star refugee camp” - a label the staff and volunteers, many of whom are from the UAE, are keen to play down.

But the high level of services provided by the camp do not come cheap and questions have been raised about both donor value-for-money and the facility’s long-term sustainability.

No expense has been spared at the isolated site, around 80km north of the capital Amman, more commonly known as the Emirati Jordanian Camp (EJC).

Unlike Jordan’s main Za’atari Camp, there is no over-crowding at EJC, currently home to around 3,600 residents. All the refugees have caravans instead of tents, and enjoy hot showers, electricity and street lighting.

The caravans are perfectly equidistant, each clearly labelled with a number and code. A central computer system keeps a record of exactly who lives where and what aid that family has received.

Every refugee receives three hot meals a day, carefully cooked on-site by a private Jordanian catering firm. The aluminum take-away boxes are delivered direct to people’s doors and those with dietary requirements for conditions like diabetes are given special meals.

There are tea and coffee buffet halls where refugees can help themselves 24/7, TV rooms for men and women, a children’s playground, a football pitch, a supermarket and a mosque.

As well as regular physicians and primary care nurses, the camp’s medical centre, laid out around a quad with a shaded benched waiting area, has a pediatrician, obstetrician, pharmacist, dentist, radiology department and observation room for anyone needing overnight attention.

And in September, a fully-equipped school opened with support from the UN Children’s Fund (UNICEF) and the UK Department for International Development (DFID) with enough space for the roughly 1,300 children in the camp, providing classes from elementary to high school level as well as sports and other extra-curricular activities.

Among the donations stacked in the supply warehouse are brand new clothes – suits, dresses and shoes for weddings and other occasions, as well as Adidas T-shirts.

This is a far cry from the stretched services in Za’atari where schools struggle to accommodate children, and a demand for basic items has in some instances created a powerful black market.

Neither staff at the EJC nor those at UAERC headquarters in the UAE capital Abu Dhabi could tell IRIN how much the organization spent setting up EJC - estimated in some UAE media reports at US$10million - or what its running costs were.

A new "five-star" camp for Syrian refugees in Jordan, Mrajeeb al-Fhood, run by the United Arab Emirates Red Crescent (UAERC) - commonly known as the Emirates Jordanian Camp. Each family has its own caravan, each perfectly equidistant from the other and cl 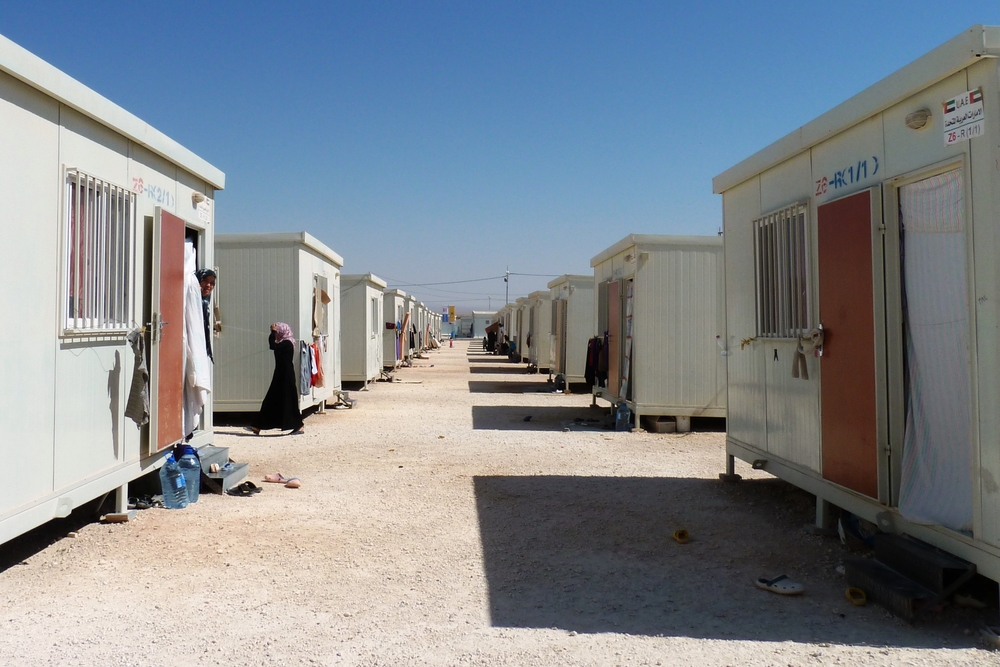 But a UAERC spokesperson told IRIN that since the start of the crisis, the charity had spent $13.5million supporting Syrian refugees in Jordan (including projects outside the camp).

While some have lauded UAE for raising the standard of refugee care, others question the cost-efficiency of the resources spent.

Jordan has taken in nearly 600,000 registered Syrian refugees. This has put an enormous financial strain on government services and prompted a massive - yet under-funded - aid operation by the UN and international NGOs.

Last week the Jordanian government announced it has so far spent $1.7billion on its refugee response and that it was struggling to cope. Za’atari is home to an estimated 120,000 people, some 33 times the number at EJC.

“The EJC is very well-resourced and well-built compared to Za’atari and they have done a fantastic job, installing closed sewage and water system, providing three hot meals a day,” said Carsten Hansen, Jordan country director for the Norwegian Refugee Council (NRC), which supports some education programmes in EJC.

But he added: “There are things you can question, like when you see that money is not forthcoming elsewhere while so much is being spent on a small number of refugees at the EJC - much more per person compared to Za’atari.”

UAERC says it has set up its camp based on its experience of aid operations in other parts of the world, including Yemen, Kosovo and Libya.

“So we know what the needs for the people are,” said Saif Ali Al Dhaheri, director-general of the camp.

"The agencies in charge of EJC have their own way of doing things, but I think we can learn from each other"

“Yes, we could shelter more people if we spent less, but we would not be able to give them the same level of services,” he told IRIN. “Say we had 10,000 or 20,000 people here and the infrastructure couldn’t cope and then they all became sick? We are spending like this because we want these people to be in safe hands.”

During a tour of the tightly-fenced camp, Saif Al Kaabi, a medical doctor who oversees the EJC health facilities, told IRIN the camp had had no outbreaks thanks to the “excellent infrastructure”.

“Actually, you spend more money on treating people, so how about primary prevention?”

Al Kaabi, who is taking time out from his emergency medicine positions at hospitals in the emirates of Al Ain and Abu Dhabi to volunteer in Jordan, added: “People say things about this camp without even coming here. My message would be: Come here and see it for yourself in 3D; then you will understand.”

The Jordanian government says UAE runs the camp and is free to administer it as it wishes.

“It’s their money,” said Feda Gharaibeh, director of the Humanitarian Relief Coordination Unit at Jordan’s Ministry of Planning and International Cooperation (MOPIC). “They have been very, very generous and we very much appreciate the support they have given us.”

Refugees IRIN spoke to, while accompanied by UAERC staff, said they liked the camp.

“Everything is fine here. Everything is provided: the clothing, the food, the medicine, everything,” said 40-year-old Maha, a mother of six who arrived from Homs three months ago. “My son has a job, and we are happy to be here.” 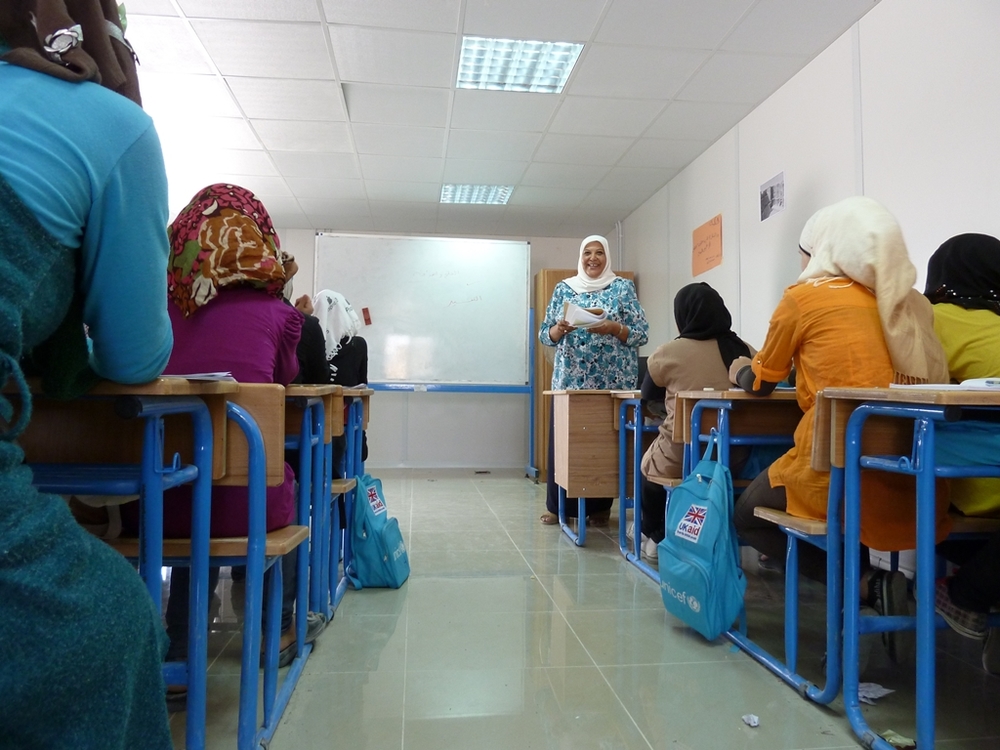 Her husband, Abdulmune'im, 47, a mechanic, added: “We came here because… we heard people talking about it when we got to Jordan. Everyone was saying it was good with good food and shelter.

“I have a cousin there in Za’atari,” he went on. “He says it’s so crowded. Yes, it’s definitely better here. There is more space and better services.”

But for all the perks of life in the EJC, there are also rules.

Only families are allowed; no single men; and vulnerable families are encouraged to go to EJC rather than Za’atari, which is much larger and where crime and safety have been an issue.

No private cooking is allowed - no need, IRIN was told: all meals and snacks are already provided - and no free market for goods and services to be bought and sold.

“It’s a debate we had,” Al Kaabi explained. “In Za’atari they have a free market but who is getting rich? Only a very small number of people and mostly people are being exploited.”

In addition, only one person per family is allowed to work. They apply to a central committee, which will then match their skills to vacant positions. While many do cleaning and other manual work, teachers and medical staff have also been given jobs at the camp’s school and hospital unit.

Lab technician and father-of-five Mohammed, from the southern Syrian governorate of Dera’a, told IRIN he was happy to be working, even if he was only being paid 25 Jordanian dinars a week ($22), far less than his old salary at a government hospital in Syria.

It is clear, however, that EJC is not for everyone.

According to the International Organization for Migration (IOM), responsible for moving refugees from a border reception centre to the different refugee camps, 4,504 refugees had been taken to EJC as of 2 October. That means some 900 - close to one-fifth of the camp population - have since left, either back to Syria (as refugees across the region regularly do), to other camps or to live in Jordanian cities and towns.

The camp is also far from full. There are 770 caravans in the first phase of the camp, of which 71 stood empty in early October. There are an additional 2,200 new caravans already on site and ready to be used for a second phase, once the plumbing and electricity infrastructure is complete. In April when the camp opened it was reported it would have a final capacity of 25,000.

MOPIC’s Gharaibeh said those looking to earn money may prefer to live in Za’atari, but “for a widow or women-headed family with a lot of girls, for elderly people, or for those with disabilities, I think EJC is the best place to be, most convenient.”

But how long will it be around?

But four years after Mazraq II’s grand opening, UAERC staff have long gone, the electricity has been switched off and much of the site’s infrastructure looted. IDPs have been left with caravans they cannot maintain and medical equipment they cannot use.

Al Dhaheri said “only God knew” how long EJC would remain open. A UAERC spokesperson said it will continue supporting EJC and the Syrian refugees “for as long as necessary.”

Western aid agencies have often been sceptical of the approach of Gulf donors.

But as the latter become increasingly important players in today’s emergencies, the two are working more closely together. EJC, where several UN agencies and international NGOs are collaborating on projects, is a clear example of that.

“The agencies in charge of EJC have their own way of doing things,” says Hansen, of NRC, “but I think we can learn from each other.”