Thousands of permanent homes needed for returnees to northern Sri Lanka in the aftermath of a 26-year civil war which ended in 2009, are not being built because of a lack of donor funding.

“Although the remaining gap in the housing sector in the north keeps changing due to new returnees, there is a serious funding gap for at least another 30,000 houses immediately,” said Laxman Perera, programme manager for the UN Human Settlements Programme (UN-Habitat) in Sri Lanka.

Of the 143,268 permanent houses needed in five northern districts (Jaffna, Vavuniya, Mannar, Kilinochchi and Mullaittivu), current pledges cover only 75,199 homes, of which only 32,441 had been completed by the end of May, according to a 30 June report by SLRC and the International Federation for Red Cross and Red Crescent Societies (IFRC).

The bulk of support comes from the Indian government which is financing the construction of 50,000 homes, including 39,000 in Northern Province, 4,000 in Eastern Province, and more than 7,000 in Uva Province (southeast) and Central Province.

The Indian High Commission in Colombo aims to complete 10,000 units in the north by the end of 2013.

Under the programme, each beneficiary receives Rs 550,000 (US$4,200) to construct a 500 square foot home. The money is released in three installments upon completion of the foundation, walls and roof, and monitored before the next installment is given.

Of the more than two dozen organizations, NGOs, and government agencies involved in permanent housing construction, four are implementing partners of the India project: UN-Habitat, IFRC in partnership with SLRC, the National Housing Development Agency (NHDA), and Habitat for Humanity - Sri Lanka.

“We need to come up with an effective plan to raise funds and do it fast,” said Abeywickrama, who cited a combination of reasons for the funding gap, including the global financial crisis, waning donor interest, and other more recent humanitarian crises diverting donor attention.

As former refugees in India return home, permanent housing needs are likely to rise, he added.

Tens of thousands of Tamil civilians fled to India to escape fighting between government forces and the now defeated Liberation Tigers of Tamil Eelam (LTTE), who fought for an independent Tamil homeland from 1983 to 2009.

According to Indian government figures, there are more than 100,000 ethnic Tamil Sri Lankans in the southern Indian state of Tamil Nadu, including 68,000 in 112 government-run camps and 32,000 outside the camps.

Since the conflict was declared over on 18 May 2009, just 6,574 have returned home from India, the UN Refugee Agency (UNHCR) reported on 11 July.

Damaged houses near the main road in the Mullivaikkal area of the Mullaittivu District, northern Sri Lanka. Thousands of homes were damaged by the decades-long civil war which ended in May 2009 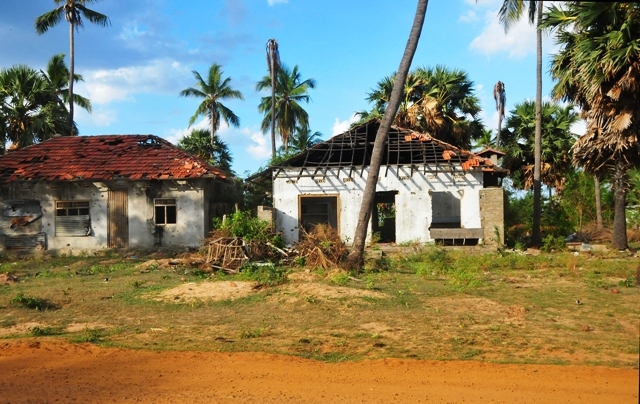 The SLRC report raised concerns over construction delays caused by the lack of ownership documents, rising construction prices, and a lack of skilled labour.

The lengthy application procedure and the wait for funds to be made available have forced many returnees to seek private loans to repair their houses - at least partially.

Since the end of the war, more than 460,000 displaced persons have returned to Northern Province, says the UN Office for the Coordination of Humanitarian Affairs (OCHA).

Jayanthi Subramaniam a 32-year-old mother of two from the village of Tharmapuram in Kilinochchi District, returned in early 2011 and almost immediately applied for assistance to rebuild her three-bedroom house.

“I still haven’t gotten anywhere with the house,” she conceded. Initially delayed by lack of documents, her application is now pending for want of funding. “We have taken loans and repaired our house so that we can live there. But now we are in debt,” she said.