Former rebel fighter Lahpai Hkam has been in pain every day since a landmine destroyed his lower right leg during a battle with government soldiers 18 months ago in Myanmar’s northern Kachin State.

“The artificial leg that I was given last year doesn't fit properly and it rubs on my stump causing a lot of pain,” he said in a hospital in Laiza, the de facto capital of the Kachin Independence Organization (KIO), the political wing of the Kachin Independence Army (KIA), which has been fighting for greater autonomy from the Burmese government for the past six decades.

According to rebel Kachin surgeon Brang Sawng, such stories are common and the number of landmine injuries is on the rise.

“More than 45 soldiers who have had amputations because of landmines over the last two years urgently need prosthetics and replacements,” said Sawng. “The number one injury is caused by landmines, with both Burmese troops and Kachin soldiers mistakenly stepping on their own mines.”

While neither side has published any official figures on civilian landmine casualties, media reports and information from NGOs indicate there were at least 381 landmine casualties, including 84 deaths in 2011. However, international experts say the real number could be significantly higher.

"No armed group - neither the army nor any ethnic armed group [in Myanmar] - provides any public information on casualties, especially civilian ones. This is not unusual,” Yeshua Moser-Puangsuwan, a researcher with the International Campaign to Ban Landmines (ICBL), told IRIN.

Many observers fear a rise in civilian casualties - and prosthetics are not the only thing in short supply.

“For many of the operations we need blood transfusions, but we have no emergency blood bank or reserve so we are forced to operate without blood replacement,” the doctor Brang Sawng explained outside the recovery room of Laiza’s main military hospital.

According to a recent report by Human Rights Watch (HRW), both government troops and the KIA still use landmines.

Seng Myu, a KIA soldier and medic, with his newly born baby, at the Warabung displaced persons camp in northern Kachin State 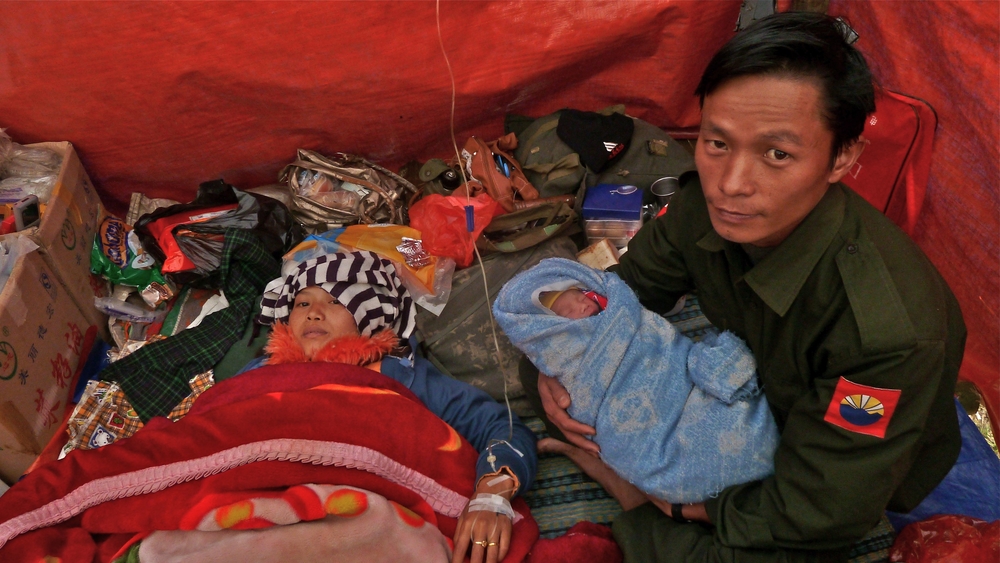 “These are weapons that will continue to maim and kill for years to come and I would be surprised if both sides are capable of mapping and following where they actually placed these mines,” said Phil Robertson, deputy director of HRW’s Asia division. “The answer is for both sides to cease using anti-personal landmines.”

The collapse of a 17-year-old ceasefire between the Burmese government and the KIA in June 2011, has left more than 80,000 displaced.

For Kachin farmers like Naw Tarong, who fled his home more than a year ago with his wife and three children, leaving behind crops and cattle, the chances of returning home soon look remote.

“We cannot return home because KIA soldiers have planted landmines around our village to keep the Burmese out, and they have warned us not to go back yet,” Naw Tarong said, adding that some of his cattle had stepped on them and been killed.

ICBL’s Moser-Puangsuwan said many civilians (mainly subsistence farmers) set off the mines while returning to their fields or foraging in the forest. “Combatants in Myanmar/Burma do not generally mark their mined areas… A deadly hazard exists.”

Currently, Myanmar has no specific policy to support landmine victims during treatment and rehabilitation, and emergency services in conflict areas are “extremely limited”, according to a 2012 Landmine Monitor report.

As of 1 October 2012, 160 countries (over 80 percent of the world’s governments) have ratified or acceded to the Mine Ban Treaty, and 111 have signed or ratified the Convention on Cluster Munitions. Myanmar has signed up to neither.