The government of Myanmar has launched a large-scale effort to relocate to higher ground tens of thousands of Rohingya internally displaced persons (IDPs) ahead of Cyclone Mahasen, says the UN.

“At this point, we are all working against the clock,” Kirsten Mildren, a spokeswoman for the UN Office for the Coordination of Humanitarian Affairs (OCHA), told IRIN on 14 May in Bangkok. “Thirteen thousand have already been moved. It’s estimated another 25,000 will be moved today.”

Mahasen is expected to make landfall on 16 May, striking Bangladesh, Myanmar's western Rakhine State, and parts of India. Millions could be affected.

“It’s really hard at this stage to second-guess the storm path or what its intensity will be when it hits land. It’s changing all the time,” said Mildren. “Needless to say we need to prepare for any possibility.”

Under Stage 1 of the government’s three-stage disaster preparedness plan, provisions to move upwards of 38,000 persons at risk (IDPs and non IDPs) began on 13 May in the northern Rakhine townships of Sittwe, Pauktaw, Khauktaw, as well as rural areas where many are living in makeshift shelters.

From there, the displaced are relocated to higher ground and where possible, temporarily housed in government buildings, schools, and mosques.

In the event the storm increases in severity, Stage 2 of the government’s plan will be activated - including the relocation of more than 100,000 IDPs, as well as non-IDPs living in high risk areas. 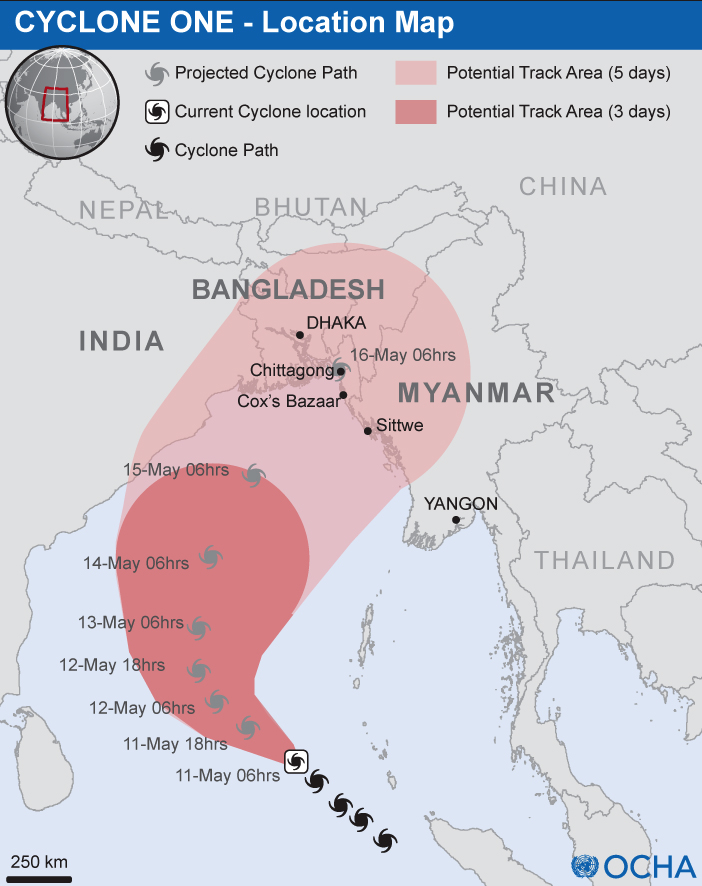 “All options, including staying with host families, are being considered,” Mildren said, noting that UN staff are on the ground and monitoring the evacuation to ensure people are fully informed of what is happening, are allowed to take some of their belongings with them, and that families stay together.

Most locations are within 60 minutes’ walk from their current locations. In areas where the distances are further, the government is providing transport.

Meanwhile, Human Rights Watch (HRW) has issued an urgent call for the Burmese government to step up its evacuation of the Rohingyas, who were displaced by two waves of sectarian violence in 2012.

Violence between Buddhists and Muslims in June and October 2012 left 167 dead and hundreds injured. At least 140,000 were displaced, says the government, with more than 10,000 homes and businesses burned or destroyed.

“If the government fails to evacuate those at risk, any disaster that will result will not be natural, but man-made,” warned Brad Adams, HRW’s Asia director.

Oxfam has echoed the need for swift action.

“Oxfam welcomes the steps being taken by the government to ensure all affected communities including those displaced by ethnic conflict are relocated to safe places, but swifter action is needed to ensure people are moved before the storm hits,” said Jane Lonsdale, acting country director for Oxfam in Myanmar. “It is essential that humanitarian principles are adhered to in moving all affected populations safely to suitable locations and that no one is left out.”

According to OCHA, identifying suitable relocation sites is the biggest challenge for the government. The situation is particularly acute in 13 camps in Sittwe (40,000 people), Pauktaw (20,000 people), and Myebon (3,900) where there are sizeable risks of flooding. Another 5,000 IDPs are not in appropriate shelters to withstand the rains.

On 13 May a boat said to be evacuating up to 200 Rohingya Muslims capsized off the west coast of Myanmar - though it is not clear whether this was part of the official evacuation operation.