Bangladesh and Myanmar are bracing for Cyclone Mahasen, a storm which could affect millions in the region, the UN has warned.

“We are fully prepared and coordination systems are in place,” Mohammad Abdul Wazed, additional secretary of the Bangladesh Ministry of Disaster Management and Relief, told IRIN on 13 May from Dhaka, noting that local disaster management committees at district and sub-district level had already been activated.

“Starting yesterday, we have been broadcasting storm warnings every 30 minutes,” said Myanmar's presidential spokesman Ye Htut. “As a precautionary effort, some people in low-lying areas of Rakhine State have already relocated.”

According to the UN Office for the Coordination of Humanitarian Affairs (OCHA), a red storm alert remains in effect for Mahasen, also known as tropical Cyclone O1B, just east-northeast of Sri Lanka, now moving northwards across the Bay of Bengal towards both countries.

Set to reach land on 16 May, the storm is expected to strike just south of the Bangladesh port city of Chittagong, but could, depending upon its final trajectory, bring life-threatening conditions for millions of people in northeast India, Bangladesh and Myanmar’s Rakhine State, OCHA warned on 12 May.

Over the past week, parts of northeast India and Bangladesh have received 6-12 inches of rainfall so additional heavy rain will likely produce widespread flooding and possible mudslides. In the coastal Bangladesh city of Chittagong, a city of 2.5 million people, more than 15 inches of rain were recorded in the past eight days.

Currently, the cyclone alert signal remains at Level 3 (out of 6), whereby fishermen are advised to return from sea. Once Level 4 is reached, a meeting of the cyclone preparedness committee (headed by the secretary of the Ministry of Disaster Management and Relief and made up of representatives of government, Red Cross and civil society) takes place, at which point plans for evacuations will be made, Wazed explained.

“We think Level 4 may be announced today,” he said, adding that he was awaiting word from the Bangladesh Meteorology Department.

Currently, humanitarian agencies in Bangladesh are revising their contingency plans for all 13 districts in the cyclone belt, including the pre-positioning of stocks in areas deemed most vulnerable.

A man in coastal Bagerhat District grieves for the lost of his loved ones in the wake of Cyclone Sidr, which struck Bangladesh in November 2007 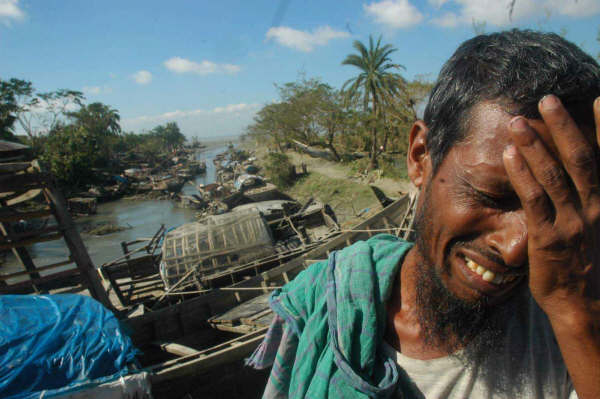 The Burmese government is taking similar action. The Met Office is warning of heavy rain in the central region, especially in the townships of Magway, Sagaing and Mandalay, with a risk of landslides and flooding if the cyclone passes through coastal areas of western Rakhine State.

On 15 May, rain and a thunderstorm have been predicted in the morning, followed by increasing wind and rain, as well as flash flooding later in the day.

Aid workers are particularly concerned about the 140,000 mostly Rohingya, internally displaced persons (IDPs) living in makeshift camps in Rakhine, many of them in low-lying coastal areas susceptible to tidal surges.

“The potential impact of the cyclone could vastly increase this risk,” said Jane Lonsdale, acting country director for Oxfam in Myanmar. “It is vital that the government takes swift action to ensure all communities, including those that are currently displaced, are in safe locations in preparation for the potential impact,” she said - a call the government has already begun to heed.

“The government has been very proactive and assigned responsibility to the Rakhine State Government who immediately activated the emergency response committee at state and township levels, and activated their Disaster Reduction Plan which includes relocation and evacuation plans. They have developed a three-stage action process, depending on the severity of the storm, with the third stage being evacuation of a large number of IDPs using military assets,” said Kirsten Mildren, a spokeswoman for OCHA in Bangkok.

In March, UN agencies and NGOs in Rakhine developed a Preparedness Plan for the country’s annual rainy season, which includes contingencies for storms such as this. The plan identifies the immediate shelter needs of 69,000 people living in the most vulnerable low-lying areas as the top priority: They live in flood-prone camps and/or tents and makeshift shelters which will not withstand the rains.

According to experts, cyclones that have hit Bangladesh and Myanmar in the past have proven particularly deadly. In 2008, Tropical Cyclone Nargis left more than 100,000 dead in southern Myanmar, while in 1991, Cyclone Marian killed more than 100,000 in Bangladesh.