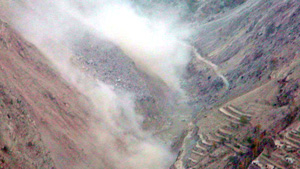 PESHAWAR, 7 March 2013 (IRIN) - In his village near Muzaffarabad, capital of Pakistan-administered Kashmir, Nazeer Butt, 40, points to his ruined house on a steep mountainside.

“Three outer walls caved in and the roof was damaged when a torrent raced down the hill and hit it last month,” Butt told IRIN.

He is currently living with a neighbour, while he attempts to rebuild the house. He has sent his family of five to live with relatives.

They tend to be much more destructive than regular flooding because of the element of surprise, and the force of the water, which carries far more boulders and other debris, destroying infrastructure like roads, dams and irrigation systems.

A new report by the Kathmandu-based International Centre for Integrated Mountain Development (ICIMOD) says a “growing body of evidence indicates that the frequency and intensity of flash floods are increasing in the countries of the Hindu Kush Himalayan region.”

ICIMOD works in eight countries in this region, to help communities understand and adapt to the impact of human development and climate change.

Flash floods can be created when glacial lakes, bodies of water created by retreated glaciers, burst their banks.

An ICIMOD survey identified 5,000 glaciers in Pakistan, of which 52 look to pose a risk of triggering flash floods.

Sudden heavy rainfall during the monsoon can also trigger flash flooding: In September 2012 the hilly Jaffarabad and Naseerabad districts of Balochistan were badly hit. Over 7,000 people were affected, according to the Balochistan government focal person on floods, Akbar Hussain Durrani, and he says some are still struggling to rebuild their lives.

Rainfall in the region is frequently heavy and localized, a phenomenon sometimes called a cloudburst, which can cause a sudden flood of water that surprises downstream villages which may not have had any rain at all.

“My home was washed away, so were my lands. I have no money to rebuild them,” said Afzal Baloch, currently living with his family in a makeshift shack along a road leading out of the town of Dera Murad Jamali in Balochistan’s Naseerabad District.

"The sight of entire rivers of water sweeping down the hillside and washing away homes and everything else was just horrific. I will never forget it."

“The sight of entire rivers of water sweeping down the hillside and washing away homes and everything else was just horrific. I will never forget it.”

Preparing for the unexpected

These are some of the poorest parts of Pakistan and hill villagers feel they have little choice but to accept the risks.

But although flash floods are classed as unexpected extreme weather events, communities are by no means powerless and several measures can be taken to build resilience.

“Flash floods are fairly common. We try to raise awareness within communities about minimizing damage,” said Khan of the KP Disaster Management Authority.

In KP’s Chitral District a project was started in 2008 to set up an Early Warning System to provide people with a few minutes of warning in advance of the flooding, by using mosque loudspeakers and text messaging.

Around 90 percent of the district is at risk of flash flooding, according to ICIMOD.

Community leaders have taken part in workshops on how to help them reduce the damage floods cause, and manage such disasters when they happen.

Villages also carried out “dry runs” of disaster management strategies, and established evacuation routes and safe areas of ground that residents can escape to.

Volunteers from mountain villagers are now organized in Community Emergency Response Teams (CERTs) by NGO FOCUS Humanitarian Assistance, the implementing partner used by ICIMOD. These volunteers are the first responders in the event of a flash flood.

“Some basic response equipment [is] provided to them in order to prepare them locally,” said Salmanuddin Shah, programme manager of FOCUS.

“So far there are around 120 CERTs across Pakistan and they have been able to respond to many local disasters, saving many lives and properties.”

Using satellite imagery to identify the areas most at risk of flash floods, community leaders can work out how to reduce risks and prepare for such emergencies.

“The emphasis was on making us aware about how to lessen the damage caused by floods by, for example, preserving pastures so that the plantations growing on them could help stop flash floods pouring down hillsides,” said Hammed Uddin, a participant from the village of Zaith in Chitral, one of four selected for the ICIMOD/FOCUS flash flood programme in the area to the west of the Yarkhun river.

The centre of Zaith village is at the point where two streams coming from different directions meet, and so is particularly vulnerable to flash floods. 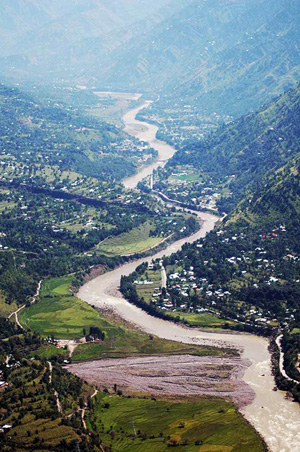 CERT training workshops give information on reducing damage when flash floods come, basic rescue techniques and practical things villages can do to reduce the likelihood of flash floods in the future.

Tree-planting is encouraged as a way to stop erosion, slow down water run-off, and also slow down the decline of glaciers.

“Human activity and interference with the natural environment, such as overgrazing in the upper catchment and deforestation, compound the problem, as lack of vegetation causes direct runoff which can trigger a flash flood. This, together with climate change, is contributing to increases in the frequency and magnitude of flash floods in the study area,” says the ICIMOD report on resilience programmes.

Water channels, check dams and gabion retaining walls made from packing stones in a wire frame have also been built in some of the villages as part of the structural mitigation programmes implemented in collaboration with the government.

Potentially life-saving equipment and supplies are also stockpiled in case of emergency.

There is no definitive data so far on how many lives such initiatives have saved, though volunteers have put their skills into action on several occasions since 2010 to help families affected by flash floods.

Hundreds have died in the past 50 years in these villages, and “flash floods and debris flow are the dominant hazards in Gilgit-Baltistan and Chitral,” said Shah from FOCUS.

But a wider question is how successfully such initiatives can be scaled-up from providing training and equipment to a handful of villages, to building region-wide resilience.

Pakistan does not yet have a national strategy that specifically plans for dealing with flash flooding, but in late February the country’s National Disaster Management Committee approved a new Disaster Risk Reduction policy to help the country build resilience to extreme climate events like floods, avalanches and landslides.

It recommends the wide application of solutions similar to those seen in the flash flood-prone valleys of KP.

"The fact that Pakistan experiences a range of regularly occurring hazards provides a strong rationale for investing in multi-hazard Early Warning Systems that provide advance warnings to both decision-makers and communities,” says the policy.