More than a month after Typhoon Bopha, locally known as Pablo, hit the southern Philippine island of Mindanao, survivors face another challenge - rebuilding their livelihoods.

"People need livelihoods. It will take years for the agriculture industry here to recover, and many rely on, and actually live off, the plantations,” Arturo Uy, governor of Compostela Valley Province, told IRIN on 9 January.

"Many are left without sources of income,” he said.

Some 80 percent of residents rely on subsistence farming, producing such things as coconut, vegetables, bananas, coffee and cocoa.

The storm, the strongest to hit Mindanao since records began, passed through the southern Philippines from Mindanao to Palawan on 4 December, making landfall three times, triggering landslides and extensive flooding.

Worst affected was the eastern part of the island, particularly the provinces of Davao Oriental, Surigao del Sur and Compostela Valley - all inhabited by coastal and mountainous communities with an economy largely based on agriculture, fisheries, forestry and mining.

According to the National Disaster Risk Reduction and Management Council, over 6.3 million people were affected, with more than 200,000 homes damaged or destroyed. Nearly 2,000 people were killed or are missing.

Experts say unregulated small-scale mining had rendered many slopes saturated and pock-marked, making them unstable and prone to landslides and flash floods.

"We continue to need urgent assistance from the government, and international donors. This is increasingly becoming a humanitarian crisis," the governor said.

Compostela Valley has been the centre of the country's US$500 million banana export industry since the 1960s. About two thirds of exported bananas are grown here, and about 150,000 people normally depend on the fruit for their primary source of income. The Philippines is the world’s third largest banana exporting country.

The Agriculture Department has said over 200,000 banana farm hands and their families live on over 42,000 hectares of plantations in Mindanao owned by large corporations, where they work for US$250 dollars a month as sharecroppers - a relatively good wage in this impoverished region.

Many of the workers migrated from other parts of Mindanao to escape a decades-old Muslim and communist insurgency. 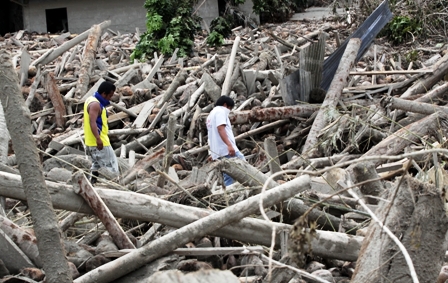 Fortunato Yubi who lost two relatives to a deadly Bopha-induced mudslide that washed out most of New Bataan town in Compostela Valley, said his family's small farm had been totally destroyed, and that they were subsisting on handouts while living in a shelter made of tarpaulin and wooden debris.

"There is no other job here for us. We've lost everything and we don't know where to go and how to start anew," the 60-year-old said. "This storm stole everything from us."

"Cash-for-work-and-food programmes must be increased to give the villagers, especially heads of families, some sense of purpose and productivity, apart from the usual needs such as food, water and shelter.”

Debris clearing remains a major concern, the UN Office for the Coordination of Humanitarian Affairs (OCHA) reported on 8 January, with a number of clean-up and cash-for-work efforts already in place.

"With homes and livelihoods destroyed, nearly one million people are in need of food assistance," Merlin's head for Asia, Gabor Beszterczey, said in statement.

"The government believes that in the worst affected areas food aid will be needed at least until the end of March,” Beszterczey said, warning that the situation could deteriorate in the coming weeks, with diseases likely.

On 10 December, the UN and humanitarian partners launched the Typhoon Bopha Action Plan (BAP), appealing for $65 million to provide emergency assistance and to help with recovery for nearly 500,000 typhoon-affected people over 3-6 months.

According to the UN Financial Tracking Service, as of 8 January, BAP is 34 percent funded with a total of $22 million in pledges, commitments and contributions. A revised BAP will be launched in Manila towards the end of January.