In the not-so-distant past, seemingly every other vehicle on Liberia’s roads was a white 4x4 with “UN” emblazoned in large black letters on its side.

First deployed in 2003, the United Nations Mission in Liberia maintained a highly visible presence in the country for 15 years as it reeled from back-to-back civil wars that were notorious for their brutality and the large numbers of people driven from their homes.

At its closure, UNMIL was deemed successful: peace had been restored, as exemplified by orderly elections that saw presidential power transferred from Ellen Johnson Sirleaf to George Weah in January 2018. The UN estimated that over 90 percent of the GDP lost during Liberia’s 14 years of conflict had been regained.

But within a year of the final troops leaving in June 2018 the annual economic growth forecast was slashed from 4.7 percent to 0.4 percent.

Liberian businesses are now in decline and inflation has soared, leading consumer prices to increase by a quarter, while employment prospects are diminished.

Protests are on the rise too, with the largest so far enticing some 10,000 people onto the streets in June to voice their dissatisfaction with the government.

Weah has attributed the current economic hardship in part to UNMIL’s drawdown. And while the impact of the mission’s departure on GDP has probably been exaggerated for political reasons, experts believe its presence – and the economic dividend it provided – did mask major structural issues that are now plain to see.

The Liberian experience raises questions for many fragile states around the world. How do you ensure longer-term stability in parallel to restoring security? And how can economies be strengthened alongside peacekeeping interventions?

A failure to plan

Part of the problem in Liberia has been the growth of a speculative economy based on providing services to the peacekeepers.

At the mission’s peak in 2005, Liberia played host to almost 17,000 foreign personnel. With them came generous subsistence allowances that provided a welcome cash injection to a prostrate local economy.

“When the mission left, that speculative economy dissolved and revealed huge structural issues in Liberia’s actual economy,” said Rachel Scott, who leads the Crisis and Fragility team at the Organisation for Economic Co-Operation and Development.

Such issues include poor access to credit and a lack of infrastructure to support private sector growth, along with the dominance of a concession model where large swathes of land are allocated to foreign companies for resource extraction, especially rubber, palm oil and iron ore. This leaves little potential for local value addition, to the detriment of the local workforce.

Failure to address the macroeconomic issues that contributed to conflict in the first place, according to Scott, is like “taking a patient in for treatment and failing to remove a brain tumour – it’s not going to work”.

“The government did not do well when it came to economic planning,” Wreh said. There was an assumption “that market forces would adjust [to UNMIL’s departure], but they failed [to do so]”.

Not just bars in trouble

A range of local service providers are feeling the pinch of lost patronage following UNMIL’s departure.

Take property owners in the upmarket Sinkor district of Liberia’s capital, Monrovia, where the mission’s headquarters were located. Before 2017, the annual rental cost of a three-bedroom apartment often exceeded $60,000 as the demand for accommodation in high-end compounds boomed.

Today, around half the properties in Sinkor are empty and landlords can only dream of collecting such rents. And although the majority of properties are owned by foreigners, notably Lebanese, often with a diverse portfolio of investments in the country, the impact on low-skilled Liberian staff who find themselves out of a job is invariably far greater.

Mohamed Rasel Khan runs B-First Hotel in Sinkor. Originally from Bangladesh, his family was encouraged to move to Liberia by a friend serving in UNMIL’s Bangladeshi contingent who saw the business potential created by the peacekeepers. B-First opened in 2006 with an apartment complex occupied mainly by lower rank UNMIL soldiers; the hotel followed in 2014.

“We opened because of the UN and used to have good business,” said Khan. “But since 2017 it has been completely empty. We used to renovate continuously, but now we can’t. Even affording electricity in the hotel is a major problem.”

B-First has been running at a loss for the past 18 months, leading Khan to reduce his Liberian workforce from 32 to 21. “Business is going down day by day,” he said. “We do not see any hope at all.”

Restaurant- and bar-owners tell a similar story. Danny Nurallah is the manager of Sajj House Restaurant, a Lebanese eatery in Sinkor that transforms into one of Monrovia’s nightlife hotspots at weekends.

“Everything reduced after UNMIL left,” Nurallah said. “The troops used to come together and we would get through four to six kegs of beer on a Friday night. These days, we might finish two.” The dwindling custom has also led to a reduction in the bar staff – all Liberians – from seven to three.

While it’s difficult to quantify indirect job losses caused by UNMIL’s departure, the direct impact on UNMIL’s national staff members, who averaged 752 in number across the mission’s lifetime, is easier to track.

Although the mission laid on careers fairs and offered small business training, around 90 percent of them have failed to find new employment, according to the OECD’s Scott. 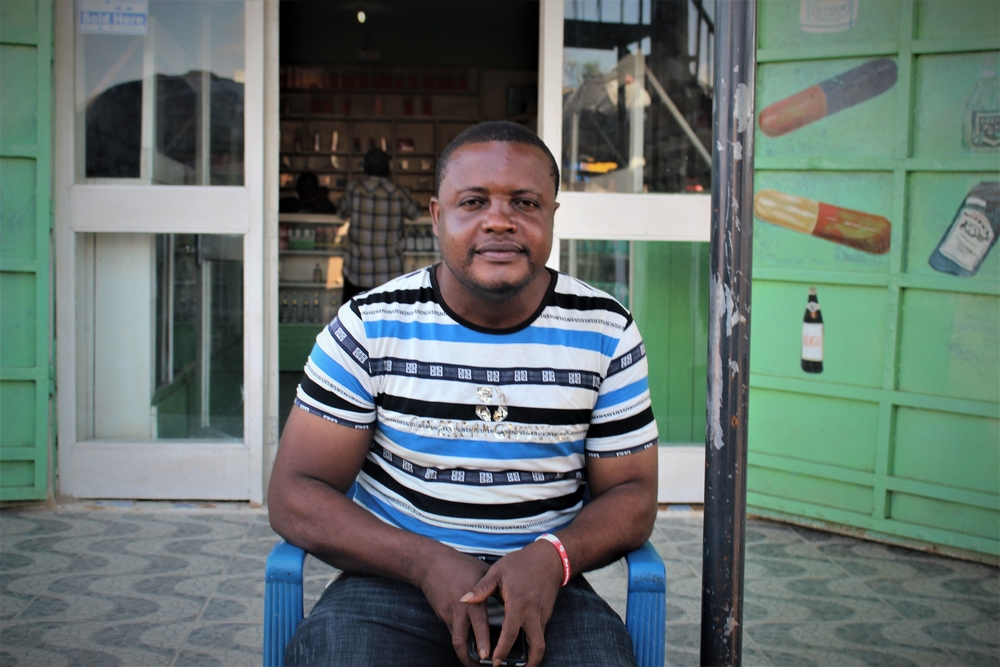 Lucinda Rouse
Since losing his job with UNMIL, Seymour Miller, 35, has been unable to support seven dependents in his family and extended family.

Seymour Miller, a 35-year-old father-of-two, has been out of a job since his contract with UNMIL’s procurement department came to an end in 2017. His $600 monthly salary enabled him to support seven members of his extended family – the average number of dependents for a salaried worker in Liberia.

Today, Miller lives off the income generated by his wife’s pharmacy business in Monrovia’s Gardnersville suburb, which on a good month brings in $160.

“Sometimes, you just have to accept,” he said, with disarming optimism.

Edith Quiah, 49, spent over a decade working for UNMIL as an administrative assistant. She used her severance pay to set up a clothes shop but found her customers lacked purchasing power and too often requested items on credit. The business soon folded.

“People aren’t buying clothes at the moment,” she said. “I should have sold basic items like rice, oil, and sugar, but I don’t have the money to stock my shop now.”

Instead, Edith lives off the salary her husband earns as a pastor, and supports him in church activities. Their two sons have been taken out of private school as they can no longer afford the fees.

“Starting a small business in this economy is an enormous challenge,” agreed 46-year-old Momolu Johnson, a father-of-seven who spent 14 years with UNMIL and has failed to find subsequent employment. Multiple business ventures – from transport to mineral trading – have flopped.

Johnson financially supported 16 people while working for UNMIL’s IT section. He describes the frustration among former colleagues who have found themselves transformed from qualified working professionals to dependents: “Jobs are not available, and it’s heartbreaking for staff to see themselves as valueless in society.”

The difficulties in finding new employment encountered by UNMIL’s Liberian former staff – many of whom are above average in terms of professional skills and educational background – are symptomatic of Liberia’s broader economic distress.

But experts say this can’t all be blamed on the mission’s departure and the removal of the “peacekeeping economy”.

And Samuel Thompson, who authored a 2018 study on the economic impact of UNMIL’s withdrawal, suggested the biggest hit from the drawdown should have been felt more than a decade ago.

“The proportional importance of peacekeeping expenditure [to Liberia’s economy] began to decline once peace had been established and FDI [foreign direct investment] kicked in,” he said.

Indeed, the number of personnel started to decrease from as early as 2005. This had a corresponding effect on the mission’s contribution to GDP, which ranged from 11.2 percent in the peak year of 2004/5 to 1.3 percent in 2017/18.

“UNMIL’s biggest impact was the creation of stable conditions for a peaceful economy,” Thompson added.

But, unfortunately for laid off former UNMIL employees like Johnson, the expected uptick in FDI and associated private sector activity failed to really materialise – a problem exacerbated by aid inflows linked to the Ebola epidemic tailing off.

“To assess the work of UNMIL, you have to look at the reality post-UNMIL,” said Johnson, who is considering leaving Liberia altogether in search of work elsewhere. “The presence of UNMIL had people fooled. We’re on life support right now, and I can’t keep my potential in a graveyard.”