Early on the morning of 24 June, around 2,000 asylum seekers and migrants – many from Sudan and South Sudan – attempted en masse to cross the border fence separating the Moroccan town of Nador from Spain’s North African exclave of Melilla.

Moroccan security forces responded by firing tear gas and wielding batons. According to government accounts, 23 asylum seekers and migrants were killed. Local human rights groups say the true toll may be as high as 37. Dozens more were injured.

Months later, many of the details of what transpired and how the deaths occurred remain contested. International human rights organisations, the African Union, and the UN have called for an independent investigation, while the incident has thrown a fresh spotlight on Morocco’s role in broader EU efforts to try to curb migration.

“[The violence] shouldn’t surprise us,” Judith Sunderland, associate director for Human Rights Watch’s Europe and Central Asia division, told The New Humanitarian. “It is almost as if the EU has accepted that violence is part of their toolbox when it comes to migration control.”

Morocco is the only African country that shares a land border with the EU, at Melilla and at Spain’s other North African exclave, Ceuta. At the closest point across the Strait of Gibraltar, Morocco is also only 13 kilometres away from Spain by sea. This proximity has led to Morocco being both a country of origin and transit for asylum seekers and migrants trying to reach the EU, with numbers ebbing and flowing over the years.

Following the 2015 migration crisis, as the EU acted to restrict the movement of people from Turkey and Libya – the two main departure countries at the time – towards Europe, arrivals from Morocco to Spain along what is known as the Western Mediterranean route spiked.

In 2018, more than 56,000 asylum seekers and migrants reached Spain via the Western Mediterranean route, making it the most active migration route towards Europe that year. A further 6,800 crossed the country’s land borders in Melilla and Ceuta.

The EU responded by providing an aid package of 148 million euros to Morocco – the vast majority of which went towards strengthening and supporting its ability to control its own borders. Arrivals on the Western Mediterranean route quickly dropped off, but starting in 2020, the route from Morocco’s west coast to the Spanish Canary islands in the Atlantic Ocean became more active.

“Morocco’s contribution to managing irregular migration through the Atlantic/Western Mediterranean route is essential,” a European Commission spokesperson told The New Humanitarian. “The European Union wants to strengthen this partnership further.”

With Morocco, the EU, and Spain all vowing to deepen their migration cooperation in the wake of the violence and deaths in Melilla, we take a look at some key questions:

Were diplomatic dealings between Morocco and Spain a key factor in the lead-up to the violence in Melilla?

The mass attempt by asylum seekers and migrants to cross the border into Melilla was not the first of its kind. On 17 and 18 April last year, an estimated 8,000 people – including 2,000 minors – swam or scaled the border fence to reach Spain’s other North African exclave, Ceuta.

Spanish soldiers and border guards responded by pushing people back across the border – sometimes violently – and rounding up and returning to Morocco the vast majority of those who managed to cross over. Meanwhile, Moroccan border guards were conspicuously absent from the other side of the border and at times appeared to assist people attempting to get across.

Spain and Morocco have had a stable relationship for years, and have coordinated closely with each other on border security since the 1990s – although the extent to which Morocco prioritises restricting irregular migration is closely linked to external pressure and incentives from the EU and Spain.

A bilateral agreement signed between the two countries in 1992 allows Spain to request the readmission of people who have entered irregularly from Morocco. And Morocco has periodically cracked down on sub-Saharan asylum seekers and migrants in the country, including in 2018.

In April 2021, however, a diplomatic stand-off threatened this relationship when Spain allowed Brahim Ghali – the leader of the Polisario Front, a Western Sahara independence movement – to enter the country for COVID-19 treatment. Morocco annexed Western Sahara in 1975 after Spain withdrew as a colonial power, leading to a war with the Polisario Front that concluded in 1991 with a UN-brokered ceasefire agreement.

Until recently, much of the international community, including Spain, remained neutral in the conflict and backed UN efforts for a negotiated solution. Morocco saw Spain’s decision to extend medical treatment to Ghali as a breach of this neutrality and threatened repercussions. A month later, the mass crossing in Ceuta occurred. 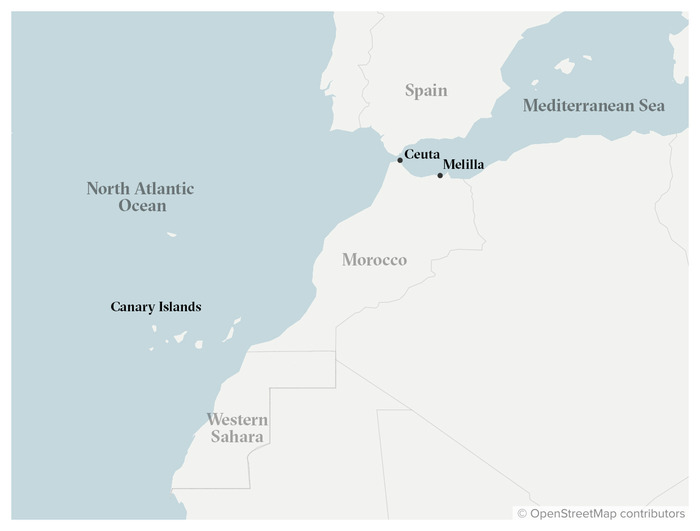 In the aftermath of the crossings, Spain attempted to make concessions to the Moroccan government. But relations did not improve until the Spanish government publicly announced its support for Morocco’s territorial claim over Western Sahara in March this year. An agreement that paved the way for strengthened migration cooperation between Morocco and Spain went into effect around the same time.

“It all went back to the issue of Western Sahara,” explained Lorena Stella Martini, advocacy and communications assistant for the European Council on Foreign Relations.

While there’s no direct evidence that the reinvigorated relationship between Morocco and Spain led to the violence in Melilla this summer, Sunderland said the actions follow a clear pattern also seen in other countries the EU partners with to curb migration.

“[There are often] crackdown[s] on undocumented migrants and asylum seekers in those countries on the heels of renewed declarations of partnership,” she said.

How have Spain, the EU, and Morocco responded to the incident?

On 24 June, in response to the attempted border crossing, Spanish Prime Minister Pedro Sánchez praised the Moroccan authorities for their efforts in handling what he said was a “violent and organised assault”, and placed the blame for the incident on what he called human trafficking mafias.

Later – after images and videos emerged showing Moroccan security forces holding truncheons, beating and kicking people, and standing over injured and exhausted people laying in piles on the ground – Sánchez attempted to distance himself from his initial comments, while still placing blame squarely on the shoulders of the “mafias”.

The Spanish public prosecutor has since opened an investigation into the deaths. HRW’s Sunderland, however, said she doubted it would be a “truly impartial one [that] will lead to actual truth and justice”.

Meanwhile, Moroccan authorities have focused on prosecuting individuals involved in or accused of facilitating the crossing. Last month, 13 men from Sudan, South Sudan, and Chad were issued with fines and sentenced to two and a half years in prison. In July, 33 people were sentenced to 11 months in prison for “illegal entry” and “disobedience”.

An inquiry by Morocco’s state-affiliated National Council on Human Rights (CNDH) alleged that the deaths were likely caused by suffocation when people were crushed while trying to cross narrow border entry points, and maintained that Moroccan security forces only used violence in isolated incidents in response to the danger posed by asylum seekers and migrants carrying sticks and stones. Dozens of Moroccan border guards were reportedly injured during the incident.

Watchdog groups, including the non-governmental Moroccan Association for Human Rights, said the CNDH’s probe was incomplete, and reiterated their calls for an independent investigation.

At the EU level, European Commissioner for Home Affairs Ylva Johansson condemned the loss of life at the Moroccan-Spanish border in a speech on 4 July, but quickly shifted to focus on the role of smuggling networks in facilitating and encouraging irregular migration.

Following a meeting in the Moroccan capital, Rabat, on 8 July between Johansson, Spain’s home affairs minister, and Morocco’s interior minister, the EU and Morocco announced a renewed joint effort to cooperate on migration and counter people smuggling, focused on border management and enhanced police cooperation.

Said Saddiki, a professor of international relations at Sidi Mohamed Ben Abdellah University in Fez, said Morocco does need more support from the EU to manage migration. He explained that EU policies have increasingly turned Morocco into a destination for asylum seekers and migrants – instead of a transit country – and said Morocco lacks the resources to integrate people into its economic and social life.

At the same time, he said there’s also still a “mutual distrust” between Morocco and Spain stemming from colonial legacies and territorial disputes, among other issues, and Morocco – like other North African countries – does not want to act as a security guard for Europe’s borders without receiving anything in return.

Meanwhile, the reliance on Morocco when it comes to managing migration leaves the EU vulnerable to the issue being used to exert political pressure on the bloc and on member states – as Turkey has done in recent years. “International issues are intertwined,” Saddiki added.

What is the situation now for asylum seekers and migrants in Ceuta and Melilla?

For asylum seekers and migrants hoping to transit through Morocco to reach Spain and the EU, the renewed focus on managing migration and tackling people smuggling will likely “make it more difficult… to reach Europe”, said the ECFR’s Martini.

“It is key that harsher controls do not result in dramatic episodes such as the one that happened at the border between Morocco and Melilla in June,” she added.

But human rights groups say that by putting the focus on combating people smuggling, Morocco and the EU are framing migration in a criminal context, which inevitably leads to directing hostile policies at asylum seekers and migrants trying to cross borders.

“It is key that harsher controls do not result in dramatic episodes such as the one that happened at the border between Morocco and Melilla in June.”

This is evident in areas close to Morocco’s borders with Spain where, at any given time, hundreds of mostly sub-Saharan asylum seekers and migrants hoping to reach the EU live in informal camps or caves in “extremely vulnerable, precarious conditions”, according to Sunderland.

Moroccan authorities also have a history of violently raiding these camps and bussing people away from the borders of Melilla and Ceuta to impoverished areas of southern Morocco, far from the coast and the Spanish exclaves, Sunderland added. These types of raids are often justified as part of the fight against irregular migration and human trafficking.

Meanwhile, according to rights groups, those who do manage to make it to Spain face quickly being returned to Morocco, often without having the opportunity to apply for international protection, which is required under international law.

New legal migration pathways, as well as serious efforts to tackle the root causes that push people to leave in search of a better life, are desperately needed, according to Martini. “It remains to be seen how the EU and its member states will work and also cooperate with important partners such as Morocco to reach such goals,” she added.