A recent wave of mass killings in Sudan’s western Darfur region has underscored the limitations of a peace deal supposed to address the violence, while raising fears of a wider escalation in conflict as the number of people uprooted continues to climb from a six-year high.

Sweeping attacks by Arab militias late last month left at least 165 people dead in the town of Kreinik, which is in West Darfur state and is mostly populated by the non-Arab Masalit group. Almost 100,000 people were displaced, according to local authorities.

Attacks like these have intensified in Darfur since 2019, but last month’s violence spread beyond communal militias into a wider battle between rebel groups, soldiers, and the paramilitary Rapid Support Forces (RSF), mirroring broader fault lines in the country.

Aid workers said support for newly displaced people is limited, and that it has been hard to bring attention to the situation amid a global funding crunch as well as fast-rising hunger and soaring food prices across Sudan.

“Darfur doesn’t have the same interest it used to have in the past,” said Jairo Gonzalez, deputy operations manager in East Africa for Médecins Sans Frontières (MSF). “It’s not on the radar of anyone now.” 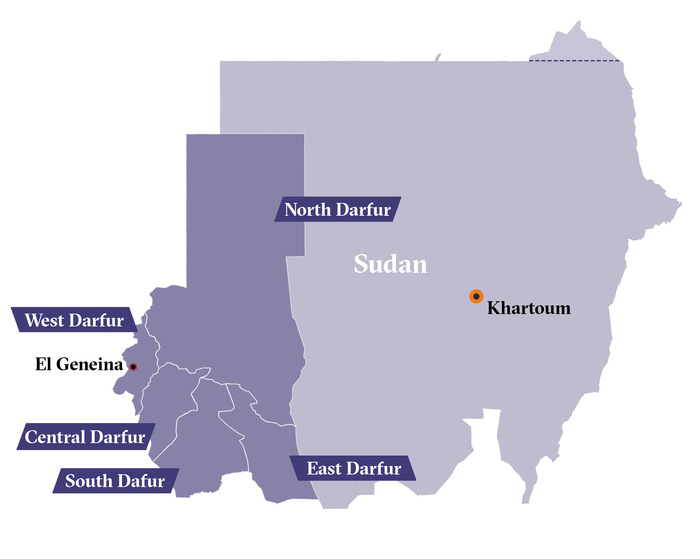 Conflict broke out in Darfur in 2003, when rebels – mostly from the region’s non-Arab Fur, Masalit, and Zaghawa groups – revolted against Khartoum. Ex-president Omar al-Bashir tried to crush them by arming Arab militias known as the Janjaweed.

The freezing of international funding to Sudan since the coup limits the junta’s ability to push forward a peace agreement struck in late 2020 in South Sudan’s capital, Juba. That deal’s signatories include rebel movements from Darfur and other parts of the country.

The political will to implement the pact was questioned by rebels even before the coup, however, and violence has worsened in Darfur since it was signed. Plans for displaced people – who are mostly non-Arabs – to return to land taken from them by the Janjaweed in the 2000s are especially divisive.

Janjaweed militias remain active in the region, while a former leader of the group, Mohamed Hamdan Dagalo “Hemedti”, is now deputy head of the junta. He also runs the RSF, which was allegedly involved in last month's attack – and several others before it.

“The current balance of power is in the hands of militias which seized control, even in Khartoum,” said Adam Rigal, a spokesperson for displaced people and refugees in Darfur. “There is a wide security vacuum, and weapons are in everyone’s hands.”

The following briefing examines the status of the peace agreement, reports on recent attacks, and outlines some key issues facing humanitarian responders. It is based on interviews with analysts, aid workers, displaced people, and civil society leaders.

A failing peace deal: ‘We repeatedly warned [it] cannot solve the crisis’

Though the Juba deal contains provisions to redress Darfur’s historic marginalisation by Khartoum, it was met with scepticism by displaced people and victims’ groups who saw it as a power-sharing pact that would only benefit rebel leaders.

That position has largely been vindicated. While the rebel chiefs received posts in government last year, key aspects relating to security, justice, and accountability have made little headway. A major holdout group in Darfur also still refuses to sign.

“We repeatedly warned that the Juba peace agreement cannot solve the crisis or address the root causes of the Darfur conflict,” said Rigal. “The reality is proving what I said.”

Since joining the former transitional government last year, the Darfuri rebels allied themselves with the military and Hemedti rather than with civilian political parties, whom they considered less powerful and not interested in Sudan’s peripheries. 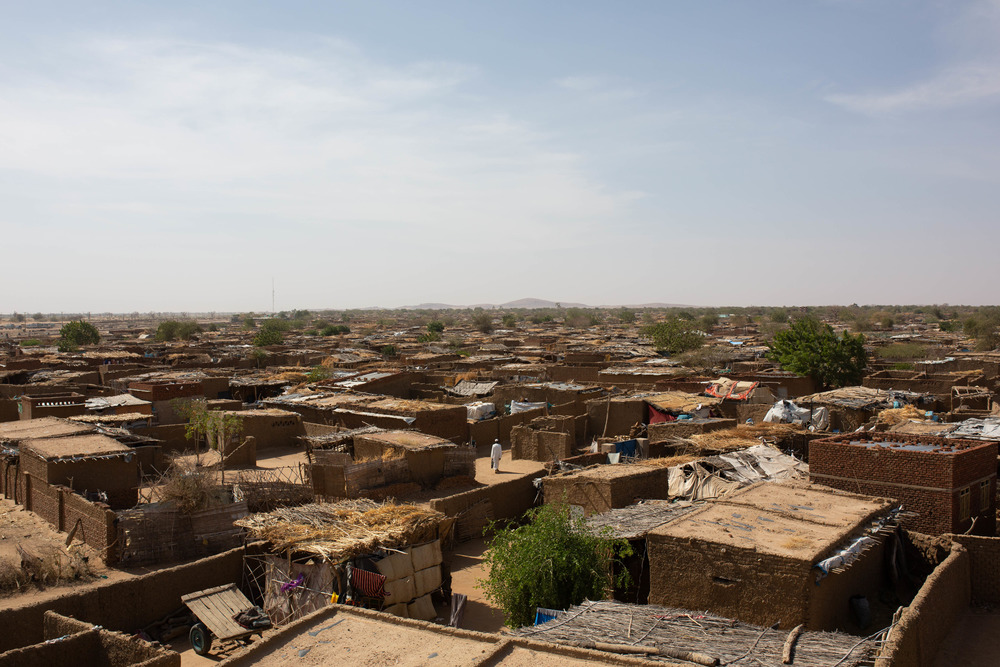 Philip Kleinfeld/TNH
A view of Kalma camp, one of the largest displacement sites in Darfur. Millions have been uprooted in the region since conflict broke out in the early 2000s.

That alliance has continued since the coup, with rebels joining the junta headed by General Abdel Fattah al-Burhan – who is accused of leading attacks against Darfuris in the 2000s.

Analysts say rebels see the junta as key to conserving their political posts. Still, the current violence and non-implementation of the Juba accord may force some to rethink their allegiances to al-Burhan, who faces mass opposition from the Sudanese street.

“The Sudanese Revolutionary Front [a coalition of rebel groups from Darfur and other regions] is running out of support from its constituents if these attacks keep happening in Darfur,” said Jihad Mashamoun, a Sudanese researcher and political analyst.

The rebel leaders face particular pressure from their fighters who returned to Darfur after the Juba deal following mercenary stints in Libya. They expected to be demobilised or merged into state security forces – but little progress has been made.

Some, lacking the means for even basic subsistence, have now deserted their movements. However, signatory groups have also recruited and trained thousands of new fighters, hoping to boost the numbers they can see absorbed into the security forces or given demobilisation windfalls.

The presence of returned rebels in Darfur’s urban centres has further militarised the region and increased levels of criminality and banditry, according to local residents and aid workers.

“They have no money and nothing to do, but they have guns in their hands,” said Mashamoun. “There needs to be a programme to integrate them, but that can’t be done while Sudan is isolated internationally.”

New violence: ‘This is total chaos and insecurity… a full scale war’

It is difficult to know who is pulling the strings in recent attacks and what their motives are. Local residents and officials cite plots to control resources and land, while a polarising transition process provides a broader backdrop.

Some Arab communities in Darfur feel empowered by the rise of Hemedti and could be using the current moment to strengthen themselves. However, peace agreement provisions that favour displaced non-Arabs also threaten their interests.

While conflict triggers vary from place to place, there is a clear trend of Arab militias attacking non-Arab civilians – of whom large numbers have been living in camps since the violence of the 2000s.

Recent attacks also appear to involve the RSF – which traces its roots back to the Janjaweed – though it is unclear to what extent fighters are following orders from commanders, let alone from Hemedti, who is trying to rehabilitate his image.

The worst of the violence has been in West Darfur, while last month’s Kreinik attack was one of the deadliest incidents there yet. Clashes began after two Arabs were found dead near the majority-Masalit town. Militiamen and RSF fighters raided it soon after.

“There was a normal criminal incident, but the militias chose to punish all the civilians because of it,” said Omda Abdul Azim Idris Adam, a 66-year-old community leader from Kreinik. “This was an extreme revenge attack.”

“This is the end point of allowing the rebels and militias to stay inside the cities with their weapons.”

Villages around Kreinik had already been attacked by militias in December, forcing thousands to move into camps in the main town. But these sites were destroyed last month, aid workers said, while some host families lost their homes too.

Aid groups have delivered some supplies in the town, “but until now there is no sustained support,” said MSF’s Gonzalez. Lacking food, many residents have been surviving on unripened mangoes, according to the UN.

Abdul Galil Mohammed, a resident of El Geneina, told The New Humanitarian that the clashes underscore the danger – which arose after the Juba deal – of having armed fighters with divided loyalties roaming around Darfur's main towns. 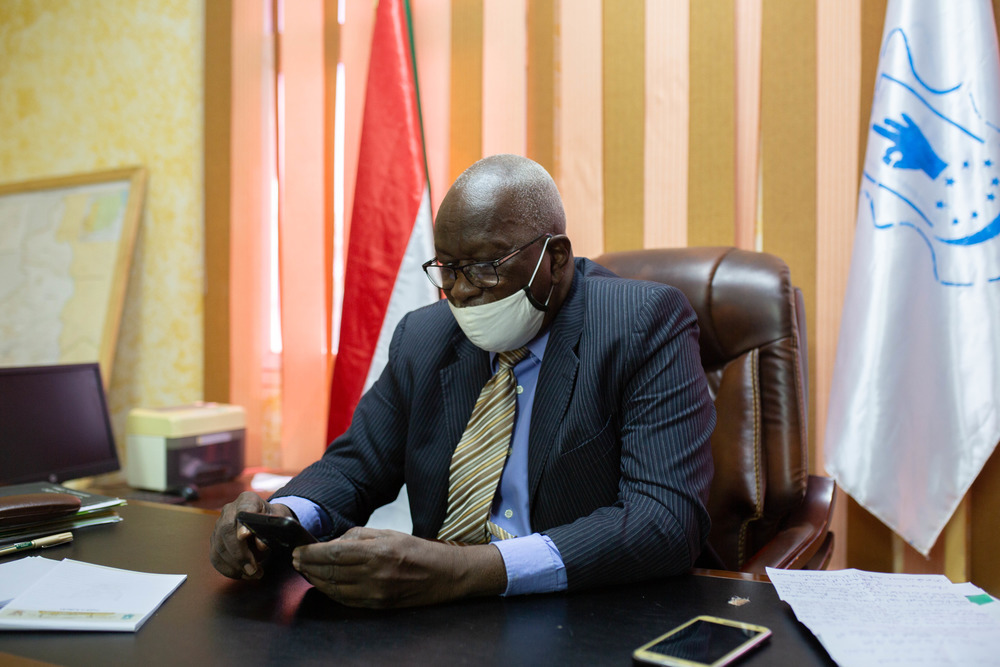 “This is the end point of allowing the rebels and militias to stay inside the cities with their weapons,” Mohammed said. “This is total chaos and insecurity. El Geneina is witnessing a full-scale war.”

Clashes in the city also broke out between the RSF and Sudanese troops sent to the area to restore order. According to local media reports, military forces fired on an RSF vehicle that refused to stop at a checkpoint.

Though Hemedti is allied with al-Burhan, the RSF leader has resisted calls to integrate his forces into the military. This has sat badly with army generals who resent the paramilitary group’s growing size and power.

Both parties have tried to stress their unity following the violence, though many fear wider clashes between the two groups, which have vast forces stationed across the country.

So long as the RSF and military maintain political power in Khartoum, the Darfur crisis won’t improve, the former governor of West Darfur, Mohamed El Doma, told The New Humanitarian.

“The government in Khartoum is unable to address this crisis because it is part of it,” El Doma said. “This conflict won’t be resolved unless the pro-democracy powers return the country to the transitional path and appoint a civilian government.”

Humanitarian agencies had hoped the post-Bashir transition would enable them to move beyond relief work and implement durable solutions for Darfur’s displaced people and refugees. But this hasn’t worked out as planned.

The number of people uprooted by conflict has forced aid groups to focus on emergency response activities, yet limited budgets mean there are wide gaps even there.

Insecurity has, meanwhile, hindered relief efforts, while NGOs working in the region and other parts of Sudan are facing increased taxes and bureaucratic hurdles since the coup, according to three aid officials who spoke to The New Humanitarian. 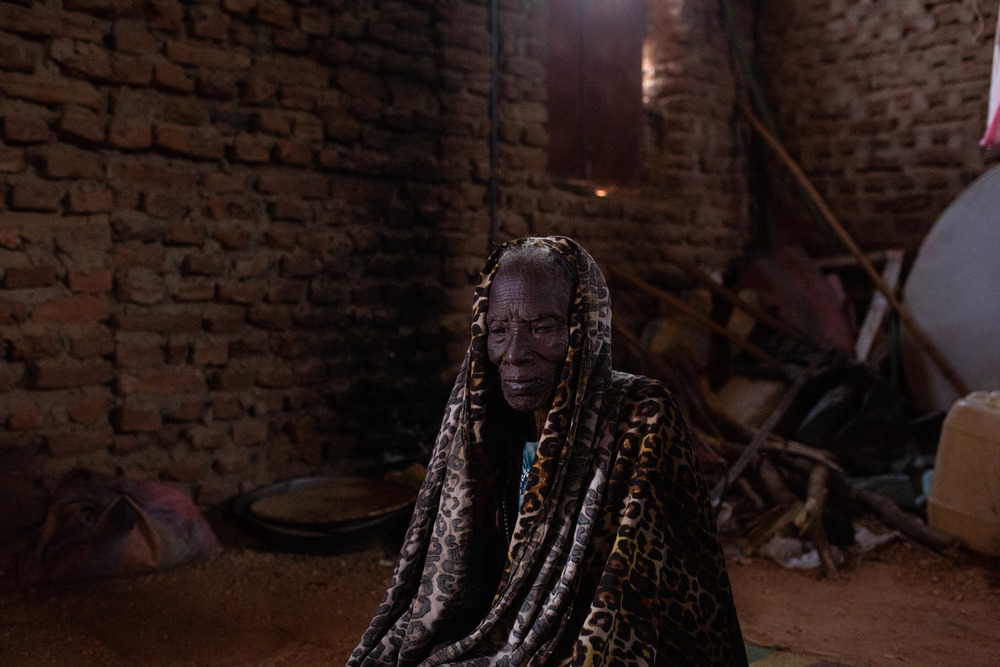 With UNAMID gone, UN agencies are reliant on escorts from local security forces – which comes at a cost. And the end of the mission’s mandate has had a negative impact on Darfur’s economy since it employed thousands of locals, officials added.

While needs aren’t being met across the region, the situation is perhaps most critical in West Darfur’s El Geneina, where more than 120,000 people are living in overcrowded sites located in government ministries and other municipal buildings.

The displaced fled a series of attacks on majority-Masalit camps and villages but have received no sustained assistance, and their sites don’t meet even basic humanitarian standards, the aid officials said.

While some aid groups have called for better shelter and living conditions in El Geneina, local authorities and UN agencies have been organising for the displaced to return to their homes despite the risk of attacks like the one last month.

New displacements were reported in El Geneina in April, though for now response efforts appear focused on Kreinik, where food stocks were looted and burnt, and where clean drinking water is scarce.

Going forward, however, only political change can stop the violence, said Rigal, the spokesperson for displaced people and refugees. “This won’t stop unless the revolution reaches its conclusion [of] democracy and achieves justice and accountability,” he said.