Sudan is experiencing its highest humanitarian caseload in a decade amid escalating civil conflict, erratic rainfall, and an economic crisis that has deepened since an October military takeover derailed the country’s transition to democratic rule.

More than 18 million Sudanese could face acute hunger by the end of the year, according to the World Food Programme (WFP) – double the number that were in need in 2021.

Living standards have fallen across the country since the coup. The local currency is crashing, taxes are increasing as international funding has been suspended, and food, fuel, and electricity prices have all soared.

Hassan Mahmoud, a 44-year-old plumber in the capital of Khartoum, said incomes cannot keep up with prices at local markets. “Living in dignity for the lower class, even the middle class, is nearly impossible,” he told The New Humanitarian.

Tens of thousands of people have, meanwhile, fled violence in recent months, with the Darfur region especially badly affected. An October 2020 national peace deal between rebel groups and the government has had little positive impact there or elsewhere.

Insecurity has hindered relief efforts in Darfur, while agencies working across the country are facing increased bureaucratic and administrative impediments since the putsch, according to the UN’s emergency aid coordination agency, OCHA.

The deteriorating humanitarian situation comes some three years after revolutionary demonstrations across Sudan led to the downfall of autocratic former president Omar al-Bashir, who had ruled for three decades.

A civilian-military power-sharing administration was formed in August 2019. But army generals dominated the fraught set-up before ousting their civilian counterparts in October this year, triggering a new phase of street protests and calls for revolution.

International actors have encouraged dialogue and supported efforts to restore power-sharing. But their stance has been criticised by the Sudanese street, which wants full civilian rule and views the coup as evidence that the army is hostile to democracy.

The military is now trying to cobble together a new coalition, which will likely face mass opposition by the street. Given their need to work closely with whoever is in power, aid groups and UN agencies worry that they could then face reputational damage.

“We will fight this coup to the last breath of our lives,” said Sami Abdullah, a member of the neighbourhood-based resistance committees leading anti-coup protests. “We won’t forget our comrades that we lost by the ammunition of the military.”

Here’s a rundown of some of the main humanitarian issues currently facing Sudan – from sliding living standards and a struggling peace agreement, to the political deadlock in Khartoum.

Worsening living conditions: ‘This is threatening us with bankruptcy’

Sudan’s economic challenges are long-standing. The country lost most of its oil wealth in 2011, when South Sudan broke away and became independent following decades of war.

But macroeconomic conditions have worsened since the coup as weekly protests rock major cities, even amid a brutal crackdown by security forces. Since October, more than 90 protesters have been killed and there have been reports of women being raped.

“Life is impossible with the current living conditions,” said Khartoum resident Abdul Rahman Mohamed. “There’s a lack of fuel, cooking gas, and flour, [and there has been] a sharp increase in electricity tariffs.”

International donors and lenders had pledged billions of dollars of development aid and debt relief during the transitional period. But their disbursements – conditioned on unpopular austerity measures that caused steep price rises – have been frozen or rerouted to bypass the military.

Among the suspended initiatives is the Family Support Programme, which aimed to provide cash transfers to 80 percent of the Sudanese population – a way of cushioning the effects of the economic crisis.

“Life is impossible with the current living conditions. There’s a lack of fuel, cooking gas, and flour, [and there has been] a sharp increase in electricity tariffs.”

Humanitarian assistance has mostly continued since October, though resources are limited. WFP says its food stocks are “dangerously low” and, without new funding, will start running out next month.

Resistance committees and other neighbourhood groups are providing food and mutual aid in some areas. But their efforts are dwarfed by the rising humanitarian needs in both urban and rural settings.

The economic decline comes amid prolonged dry spells and pest and disease outbreaks that have reduced harvests. National cereal production from the 2021/22 agricultural season is 35 percent lower than the previous year.

Food imports need to be increased to plug the widening gap. Yet rocketing global wheat prices and Sudan’s dependence on grain from Ukraine and Russia may complicate matters, according to the US-funded food security monitor, FEWS NET.

“The season has failed, and even with the small production that we harvested, the government wants to buy [wheat and cotton] from us at unfair prices,” said Ahmed Mahoud Abdallah, a farmer in Gezira state. “This is threatening us with bankruptcy.” 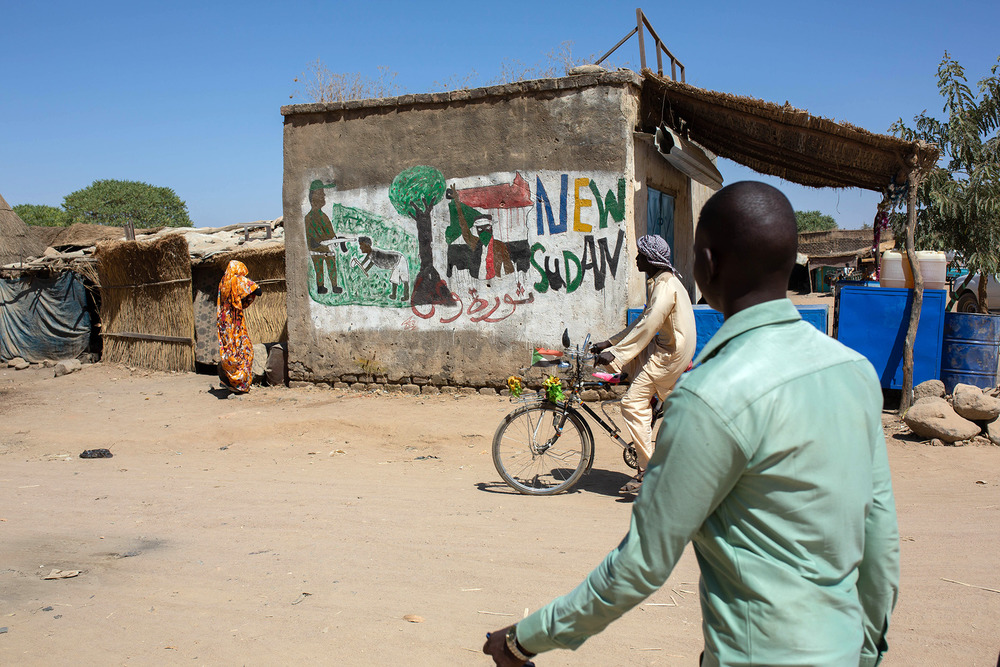 Philip Kleinfeld/TNH
A mural from the 2019 revolution on the wall of a shop in Nertiti, a conflict-affected town in Darfur.

Darfur violence and a failing peace deal: ‘What we saw is a massacre’

Some had hoped the 2020 peace deal – known as the Juba Peace Agreement (JPA) – would help reduce instability in Sudan’s peripheries, including the western Darfur region, where rebel groups revolted against the government almost two decades ago.

But Jihad Mashamoun, a Sudanese researcher and political analyst, said a peace agreement that tackles conflict drivers and pushes for transitional justice is “possible only in a democratic system that doesn’t involve the military”.

The JPA is now increasingly seen as an old-school payroll peace deal, with power doled out to rebel elites, some of whom received top cabinet positions after signing the agreement.

“A peace agreement is possible only in a democratic system that doesn’t involve the military.”

Some of these leaders then went on to support the October coup, siding with military figures they once fought against in order to further their interests. The freezing of international financing also puts the agreement in jeopardy.

The UN says aspects of the accord have progressed. Groups that signed the deal are currently being trained by the Sudanese army as part of a new security force supposed to protect Darfur after a peacekeeping mission closed shop in December 2020.

Yet, some of those signatory groups have been accused of looting UN food stores. And violence against civilians continues to scar the region, even as the first court case related to conflict in the early 2000s gets underway at the International Criminal Court.

Eyewitnesses to the Jebel Moon attacks told The New Humanitarian that militias committed atrocities in several villages and even attacked people while they were trying to flee the locality.

“What we saw is a massacre against civilians and the burning of villages amid suspected silence from the local authorities,” said Ibrahim Osman Adam, a member of a medical group in El Geneina, the capital of West Darfur.

Tensions aren’t limited to the peripheries. Internal divisions have become increasingly apparent within the security apparatus, which fears full civilian control would damage its economic interests and lead to accountability for past rights abuses.

Hemedti appears unwilling to integrate the RSF – which traces its roots to the Janjaweed militias culpable for atrocities in Darfur – into the regular army in order to preserve his economic and political power.

“What we saw is a massacre against civilians and the burning of villages amid suspected silence from the local authorities.”

A former civilian official in the ousted government, who asked for anonymity for security reasons, said a confrontation almost broke out last month when the military ordered the withdrawal of RSF elements guarding the presidential palace and army headquarters.

A message to the international community: ‘Support the demands of the revolution’

After the October coup, former civilian prime minister Abdalla Hamdok was briefly reinstated by the junta leaders in a new deal that was tentatively welcomed by UN officials in the country.

But Hamdok had little executive space and resigned in January amid criticism from the resistance committees who said the agreement was a smokescreen for military hegemony.

The UN’s political mission in Sudan, known by its acronym UNITAMS, then launched a consultation process to resolve the post-coup deadlock. But this again proved unpopular with the uncompromising Sudanese street.

“We have nothing to do with these local or international mediations, and we demand all of them clearly support the demands of the revolution,” said Abdullah, the resistance committee member.

Mashamoun, the political analyst, said the generals are now trying to build a coalition with civilians linked to the al-Bashir regime and elements of the Forces for Freedom and Change coalition, which had been part of the transitional arrangement.

“We have nothing to do with these local or international mediations, and we demand all of them clearly support the demands of the revolution.”

By dragging out these negotiations, Mashamoun said the military hopes to tire out the international community to the point where it accepts whatever deal is put in front of it – and turns the funding taps back on.

Still, a backroom deal is unlikely to be accepted by the resistance committees, which have continued to lead demonstrations in recent weeks, despite searing temperatures and the Ramadan fast.

Last month, the Khartoum committees released their own political charter, based on the input of thousands of members. It calls for coup leaders to be held to account, and for a two-year transition that would see radical reforms to the Sudanese state.

The vision should be supported by international actors, said Mashamoun: “They should take their lead from the resistance committees, and from others who are supporting democracy in Sudan.”