Confirmed cases of coronavirus in two of the six UN-protected displacement camps in South Sudan have led to renewed calls for the 190,000 residents to return to their homes, despite safety concerns as new waves of violence grip the country.

The UN’s peacekeeping mission in South Sudan, UNMISS, “strongly encouraged” residents in March to leave the overcrowded sites – a call repeated last month after two cases of the virus emerged in a camp in the capital, Juba.

UN police officers have withdrawn from the camps to protect themselves from COVID-19, while government security forces have intermittently blocked entry to some sites, ostensibly to stop the spread of the disease.

The camps – known as Protection of Civilians (PoC) sites – were set up at the beginning of South Sudan’s civil war, in 2013, when civilians fled to UNMISS bases to escape ethnic violence. Protected by UN peacekeepers, they have nonetheless been targeted by armed groups, and UNMISS has struggled to control violent crime inside the sites.

Cramped conditions have caused disease outbreaks in the past – and with COVID-19 now spreading in one of the most congested camps, aid groups fear a new health crisis may be coming.

Calls for residents to leave the camps – both from the UN and the South Sudanese authorities – predate the coronavirus pandemic and have increased since the formation of a power-sharing unity government in February.

But conflict around the country – clashes left at least 200 people dead last month in eastern Jonglei state – means many residents don’t feel safe going home, while others face returns to occupied properties or towns and villages still in ruins.

Calls for residents to leave the camps predate the coronavirus pandemic and have increased since the formation of a power-sharing unity government in February.

This briefing looks at how the coronavirus and related restrictions are affecting camp residents, and explores the wider context behind calls for them to return home.

How has life changed in the camps?

Since the first cases of the coronavirus were reported among PoC residents, the government’s security services have intermittently surrounded the sites and blocked residents from entering and exiting.

At camps in the northern cities of Bentiu and Malakal, residents were told – without evidence – that they could not leave because they had the virus, while residents at a camp in Juba were left without access to water supplies for three days in May after the army blocked the entrances to the PoC site following the shooting of a soldier.

The COVID-19 crisis has created hostility towards foreigners that provides a motivation for such actions. Suspicions that camp residents have the virus are partly because of their proximity to UN staff – the first three positive cases in South Sudan were all UN international staff.

But, according to the data available, PoC residents are no more likely to have COVID-19 than anyone else in the country. Many of the coronavirus cases in South Sudan have emerged on the country’s borders, not in the camps, and track cross-border trade rather than the movement of humanitarians.

Nevertheless, the PoC residents are being found guilty by association. And, as elsewhere in the world, the foreigner has become a politically useful weapon to displace blame for the virus.

Since the UN police officers (UNPOL), who manage crime in the PoCs, effectively stopped patrolling the sites on 16 May, additional security issues have been reported in some camps. In the Bentiu PoC, residents said the culprits of a recent killing took advantage of UNPOL’s absence to carry out the crime and “escape without arrest”.

Interruptions to international travel and supply chains have also significantly impeded the ability of aid agencies to get both staff and medical resources into the camps. This puts many more people at risk as a host of other diseases are common in the PoCs, including malaria, measles, and acute diarrhoea. 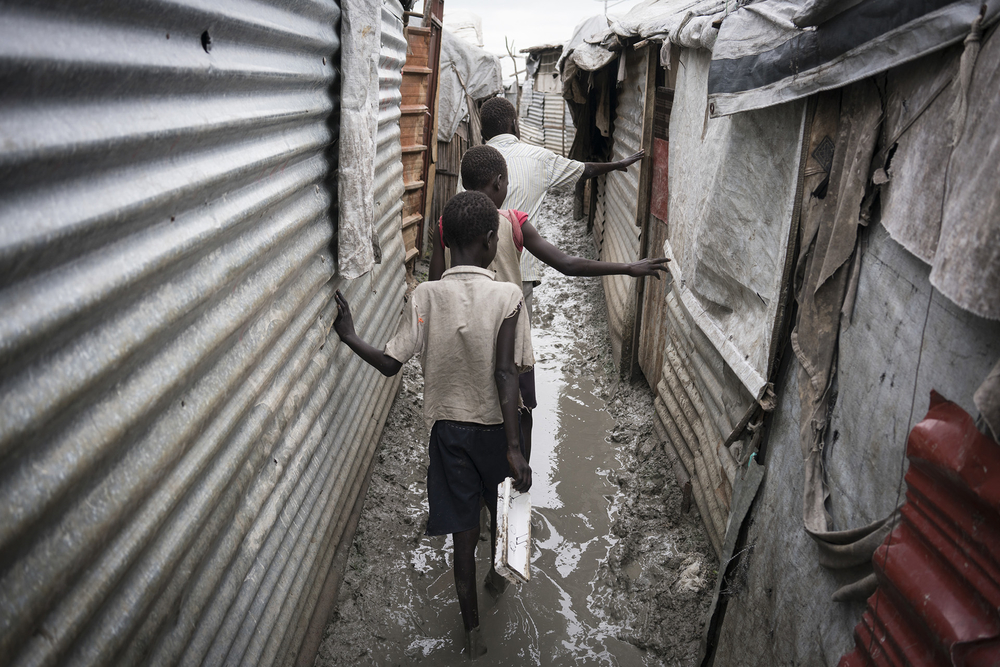 Mackenzie Knowles-Coursin/ICRC
Children in the Malakal Protection of Civilians site in South Sudan in 2017.

Why does the government want the camps closed?

The government’s hostility towards the camps is deep-rooted. Since winning military victories in major urban centres in mid-2014, sending people fleeing into UN bases, it has accused the sites of housing rebels, and pressed for them to be closed.

The camps are seen by some within the government as a violation of its sovereignty. They are also a visible indication that some of the civilian population still fear the armed forces.

With the inauguration of the power-sharing government, the government has increased the pressure on the PoCs to close. The COVID-19 pandemic offers an opportunity to further a political goal under the guise of a public health concern.

Where does UNMISS stand?

Given the danger of an outbreak of COVID-19 in the congested camps, UNMISS staff in March “very strongly encouraged people in the PoCs to return home”.The UN peacekeeping mission also said that the threat to those living in the camps, if they were to return home, had “lowered” since the formation of the transitional government.

“We can now prioritise deploying peacekeepers to hotspot locations… rather than tying them down to static duties at protection sites,” said David Shearer, the mission’s top official.

Two recent draft reports published by the UNMISS Upper Nile field office and seen by The New Humanitarian, argue that despite the history of forcible population displacement in Upper Nile state, the PoC camp in Malakal should be closed because “there are no longer threats of physical harm to PoC site residents”.

The mission has long complained that the sites use up too many resources, preventing UNMISS from fulfilling its mandate to protect civilians elsewhere in the country. One UN report in 2019 described the situation in the camps as “untenable” – citing communal tensions, the lack of economic opportunities, and social problems of crime and alcohol abuse.

But an independent report on the PoCs commissioned by the UN’s migration agency, IOM, said UNMISS has never had the capacity to adequately protect civilians outside its bases, and that the sites should not be used as a “scapegoat” for the mission’s wider failings.

Is it safe for camp residents to return home?

Despite the formation of a transitional government in February, there is ongoing conflict in South Sudan that has left many PoC residents worried about leaving.

State governors have yet to be announced by the transitional government. Such an announcement is likely to bring further clashes, as powerful military commanders are competing for these positions. Some civilians also worry that their enemies will be empowered by such appointments. “We fear that the announcement [of the governors] will just lead to more war,” one resident of the Juba PoC camp told TNH.

Shilluk residents of Malakal PoC face a particularly tough situation. From 2013-2017, the local Shilluk population were forcibly displaced from their homes by government forces, and fled to the PoC following what the UN Commission on Human Rights in South Sudan described as “a pattern of ethnic cleansing and population engineering”.

Many PoC residents feel their presence in the UN base represents a last hold on their former land, and that they cannot return to their homes in Malakal because they would face death at the hands of government forces.

Camp residents point to recent attacks and killings of Shilluk civilians – who attempted to resettle outside the PoC site in territory disputed by the Padang Dinka and the Shilluk – as evidence that their security is still not assured if it were to be closed.

Similar difficulties exist elsewhere. After the 2015 peace agreement, Bentiu PoC residents returned to their rural homes only to face a large-scale government offensive that killed thousands.

Much of Bentiu is still in ruins, with the houses of PoC residents no longer standing, and complicated land claims must be resolved before they can begin the difficult process of rebuilding their lives.

Unlike other PoCs, Bentiu includes tens of thousands of people who came from rural areas rather than from within the town. Some people have moved back to their villages in recent weeks. However, rural land is still deeply and violently contested, and the annual season when house-building is possible has now passed. People in these villages are already concerned that those coming from the Bentiu PoC will bring COVID-19 to these relatively isolated settlements and homesteads.

Those who do want to leave the camps often have no home to return to, either in the towns or in rural areas. In Juba, many PoC dwellers have had their homes occupied by others, and it’s unclear if they will be able to get them back.