In pictures, the young men pose on pick-up trucks with rocket-propelled grenades and the black-and-white flag of the so-called Islamic State (IS). In weekly magazines, members of IS attribute attacks by the youngsters to “soldiers of the caliphate”.

But on the ground in Mozambique’s gas-rich coastal province of Cabo Delgado – where spreading violence is being blamed on Islamist extremists – few residents are clear why they are being attacked and who is responsible.

“We don’t know what they want,” said Gildo Muntanga, a displaced person whose village was attacked last November. “We just see them killing people.”

More than two-years of militancy here has intensified dramatically in recent months, according to the UN. There have been attacks on passenger buses, Christmas Day village burnings, and a string of ambushes on Mozambican soldiers trying to rein in the insurgency.

The deepening crisis has displaced at least 100,000 people and cut hungry farmers off from their fields and livelihoods, heaping yet more misery onto communities still struggling in the aftermath of last April’s Cyclone Kenneth – the strongest to ever hit the African continent. 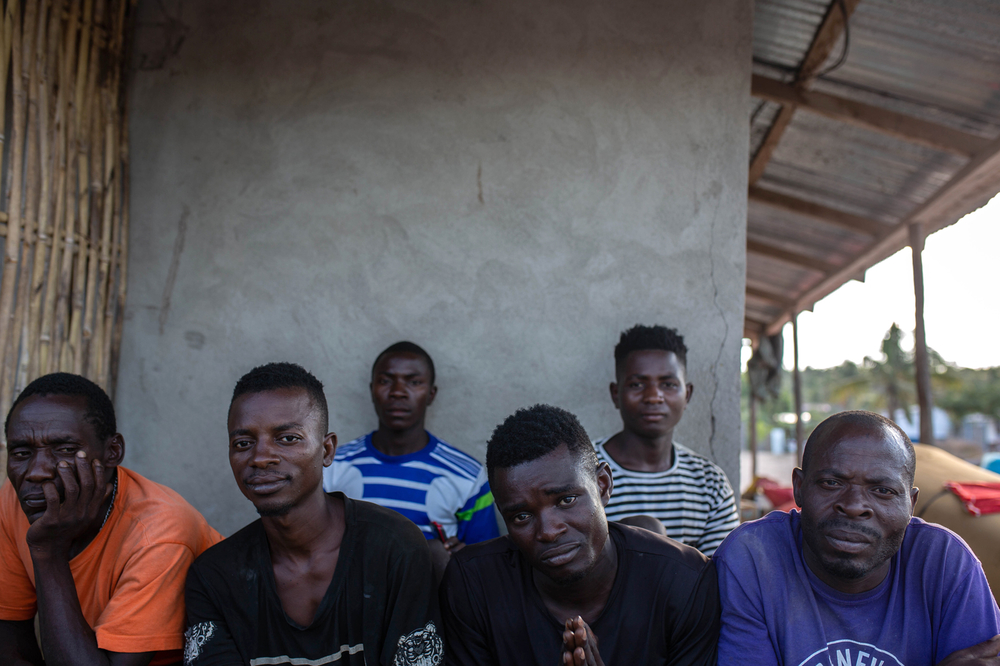 IS says its new “Central Africa Province” branch – it claims this affiliate also includes rebels from eastern Democratic Republic of Congo – is behind some of the attacks, which have left hundreds of people dead.

But a homegrown extremist sect – known locally as al-Shabab, or Ahlu Sunnah Wal Jammah (ASWJ) – is also involved in the violence, according to researchers, as are extremists from nearby Kenya and Tanzania.

The connection between IS and ASWJ remains unclear, beyond occasionally attributed attacks, and the killers have not produced a manifesto or put forward a leader with a clear religious message, leaving many to doubt their jihadist leanings all-together.

Interviews with local researchers and residents, as well as UN officials and aid workers in Cabo Delgado, suggest extremism is most likely only one part of the jigsaw, and that multiple groups and cells are now operating in the region with different objectives.

‘The government is losing control’

Despite vast natural resources and one of the word’s biggest untapped offshore gas fields, worth an estimated $50 billion, the majority-Muslim province is one of Mozambique’s poorest, with high rates of unemployment and illiteracy. Organised crime syndicates – some are believed to be involved in the violence – and political elites hoover up much of the wealth.

With no public face, the killers have confounded residents, birthed a string of conspiracy theories, and added a crippling layer of fear – of the unknown and the uncertain – on top of the very real danger civilians are facing.

The militancy has also created a difficult operating environment for international aid groups – they lack clear information on which to base security decisions and that might allow them to communicate with the armed groups responsible, as they commonly do in other contexts.

Residents say the government has offered them little help, while journalists and researchers have been arrested for working in the region, creating an information vacuum that has allowed conspiracies theories to fester.

Though poorly understood, the militants are getting stronger – launching more sophisticated attacks with better weapons against soldiers and civilians, and driving up humanitarian needs.

“The situation is escalating, and the government is losing control,” said Sérgio Chichava, a researcher at Mozambique’s Institute for Social and Economic Studies (IESE).

IS claimed its first attack in Cabo Delgado last June – the group seeking fresh pastures as it lost ground in its Middle Eastern strongholds.

Jasmine Opperman, a security and terrorism analyst has since counted more than two dozen attacks attributed by the group.

The attributions – as well as video and photo reports – indicate a certain level of contact, said Opperman, adding that the increasing sophistication and brazenness of attacks demonstrates outside support.

But there is little evidence IS is directly supplying or training the militants, and some question whether the attribution of attacks is a PR exercise by a group determined to prove its continued relevance after the collapse of its self-proclaimed “caliphate”.

Other researchers have documented connections pointing in different directions: to radical clerics and their followers in Kenya and Tanzania – and to Sudan, Saudi Arabia, Libya, and Algeria, where some hardline Cabo Delgado residents completed religious scholarships.

Rather than foreign connections, some analysts say the emphasis should instead be on the homegrown nature of the insurgents, who began launching attacks in Cabo Delgado in October 2017, more than a year and a half before IS took note.

The attackers were thought to be members of al-Shabab, a local religious sect – with no clear links to the Somali extremists of the same name – that had emerged in Cabo Delgado a few years earlier.

They had built mosques and madrassas, and preached a strict version of Islam that had them cast as outsiders – pushing them into violent acts such as in Mocímboa da Praia, where they attacked government buildings and briefly occupied the town.

“All of this religious discourse disappeared entirely.”

According to a study for the Maputo-based IESE, the militants then expanded by recruiting from friendship circles, mosques, and quranic schools, before targeting the wider population with promises of monthly wages – a luxury here in Cabo Delgado.

“They are exploiting the poverty of the people,” said Chichava.

No attacks have been claimed under the name al-Shabab and few residents interviewed by The New Humanitarian could square how a relatively small band of young men had turned into such ruthless killers.

A religious message has also been hard to discern amid seemingly indiscriminate village burnings, while the small number attacks on Christian missionaries, international aid groups, and foreign oil and gas workers in the region has puzzled residents.

“All of this religious discourse disappeared entirely,” said Marcos Lazaro, a member of a local farmer’s union.

Many analysts and UN officials have concluded that alongside extremists there are most likely multiple groups and cells that are active, and that local issues rather than extremist ideologies motivate many of the combatants.

“There are numerous driving forces at play,” said Opperman.

Poverty may be one of them. Known colloquially as Cabo Esquecido or Forgotten Cape, the region is among Mozambique’s most neglected, lingering near the bottom of almost every social indicator.

While locals struggle, criminal networks and political elites have made a fortune: on heroin trafficking – the trade passes through Cabo Delgado and is one of Mozambique’s biggest exports – as well as gemstone smuggling, wildlife poaching, and other underground trades.

Natural gas finds have drawn some of the world’s biggest energy firms to the region, but locals are still as poor as ever and thousands have been resettled from their land to make way for new plants.

Alongside extremists, these grievances – and many others – have attracted a motley crew of unemployed youths, army defectors, common criminals, and adventure seekers, according to researchers interviewed by TNH.

“This started as a religious sect,” said Chichava. “I think now we have different elements within the group.”

The complex security situation put off some aid agencies from launching operations in Cabo Delgado when Cyclone Kenneth hit, relief officials said – though many were already too tied up with the aftermath of Cyclone Idai, which struck central Mozambique a month earlier. 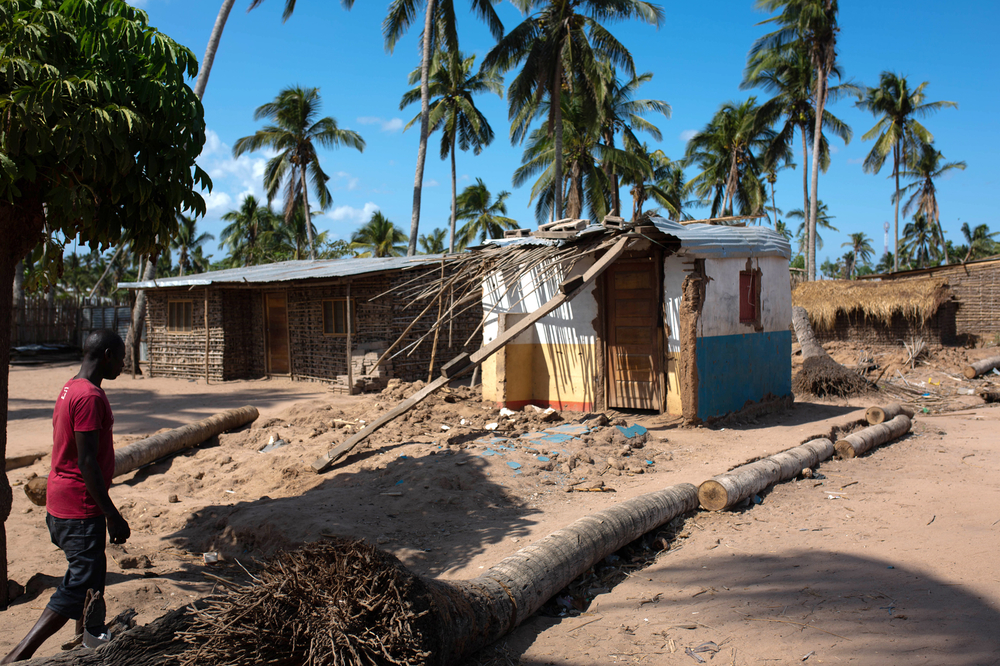 Philip Kleinfeld/TNH
Residents are struggling to cope in the aftermath of last April’s Cyclone Kenneth – the strongest to ever hit the African continent.

Humanitarian groups were few and far between when TNH visited the region in November, and those that were present were mainly focused on the aftermath of Kenneth – though last week the UN’s refugee agency, UNHCR, said it was deploying additional aid and staff to help some 15,000 displaced people in need.

Mozambique’s President Filipe Nyusi said last year that he would be open to speak with the insurgents, but as they have no overarching leadership he has no clear partner in peace as things stand.

For now, the government is sticking to a heavy-handed military approach – one marred by human rights abuses.

As the militants get stronger, many residents are just asking for basic support. “We are dying of hunger,” said José Miguel, another member of the local farmer’s union. “We want help.”