Insurgent attacks, contested elections, and drought are sparking fresh humanitarian and security concerns in Mozambique, which is still struggling with the aftermath of back-to-back cyclones that pummelled the southern African nation earlier this year.

The New Humanitarian has spent three weeks reporting across the country – from cyclone-affected provinces in the centre, to the insurgent-hit north – finding communities struggling to contend with what the UN has called “multiple and consecutive shocks”.

An estimated 2.5 million people, almost 10 percent of the population, are now in need of humanitarian assistance, according to the UN. More than 1.6 million are severely food insecure – a number expected to grow in the coming months.

Needs are particularly high in areas affected by Cyclone Idai, which struck central Mozambique in March, and Cyclone Kenneth, which hit the northern province of Cabo Delgado a month later.

Hundreds were killed, croplands were wiped out, and 2.2 million people were left in need of assistance in one of the worst weather-related disasters ever to hit southern Africa.

Meanwhile, attacks by suspected Islamists in the northernmost region of Cabo Delgado are intensifying following military operations by the Mozambican army, reportedly supported by Russian mercenaries.

Residents say the attacks are among the worst they have experienced over the course of a more than two year insurgency that has now displaced around 65,000 people. 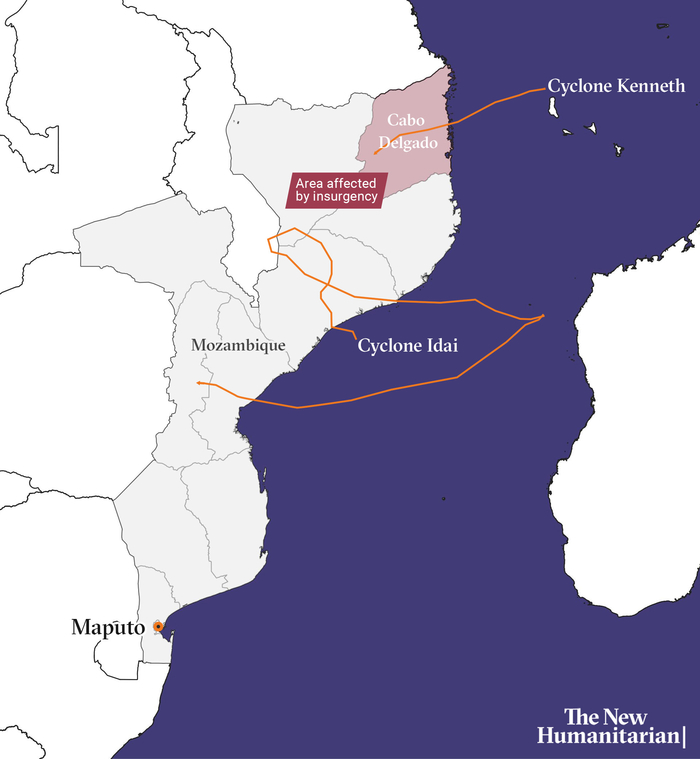 An estimated 2.5 million people, almost 10 percent of the population, are now in need of humanitarian assistance, according to the UN. More than 1.6 million are severely food insecure – a number expected to grow in the coming months.

The attacks come as political tensions rise following elections here in October. Mozambique’s ruling Frelimo party won the presidential, legislative, and provincial vote by a landslide, but the opposition Renamo has rejected the results.

The two parties – who have been fighting on and off for decades – signed a landmark peace deal in August. But tensions between them are rising and Mozambique analysts fear they may slide back into conflict.

A Renamo splinter group – which contests the peace deal – has been blamed for a string of deadly attacks on civilians in central Mozambique that have stirred memories of past conflicts among residents.

“We don’t know who is behind [the attacks] for sure, but they are starting to put the country in crisis,” said Sergio Chichava, a researcher at Mozambique’s Institute of Social and Economic Studies. 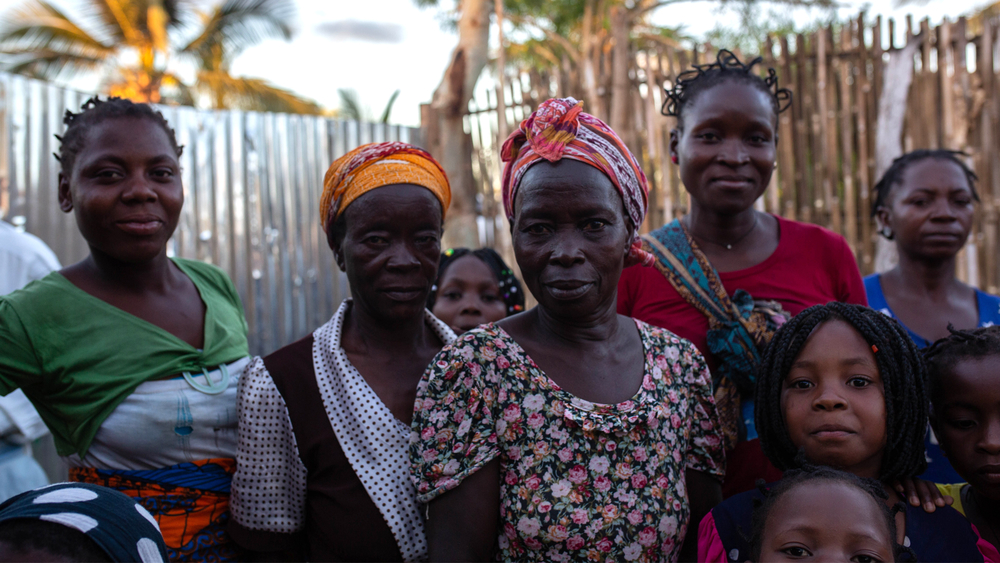 What are the needs in cyclone-hit areas?

More than seven months after Idai and Kenneth made landfall, aid groups are winding down their emergency operations, but needs remain high.

On a trip through Mozambique’s cyclone-hit areas, TNH found houses, schools, hospitals, and other public buildings still in ruins, with many people living in emergency shelters and dependent on food aid.

Hunger is widespread, after floods destroyed crops and wiped away harvests, with some cyclone-affected areas facing crisis levels of food insecurity according to the US-funded famine watchdog FEWS NET.

Reconstruction efforts have yet to really get going. Many survivors have patched up their homes using the same materials that blew apart when the two cyclones hit. Residents and aid groups fear these homes will put up little resistance as the rainy season approaches.

The government has relocated tens of thousands of people who lived in low-lying, flood-prone villages to permanent resettlement neighbourhoods on higher ground.

Aid groups told TNH the initiative was “rushed” and that the new villages lack basic humanitarian standards. Many are located several kilometres away from the nearest village or farming area – leaving residents dependent on food supplied by aid agencies and with few long-term employment prospects.

“Time and again resettled residents have told our colleagues that they don't have enough to eat, that they subsist on a tomato soup diet,” said Vittorio Infante, humanitarian policy and advocacy advisor at Oxfam. “Farmers have started to faint in the fields.” 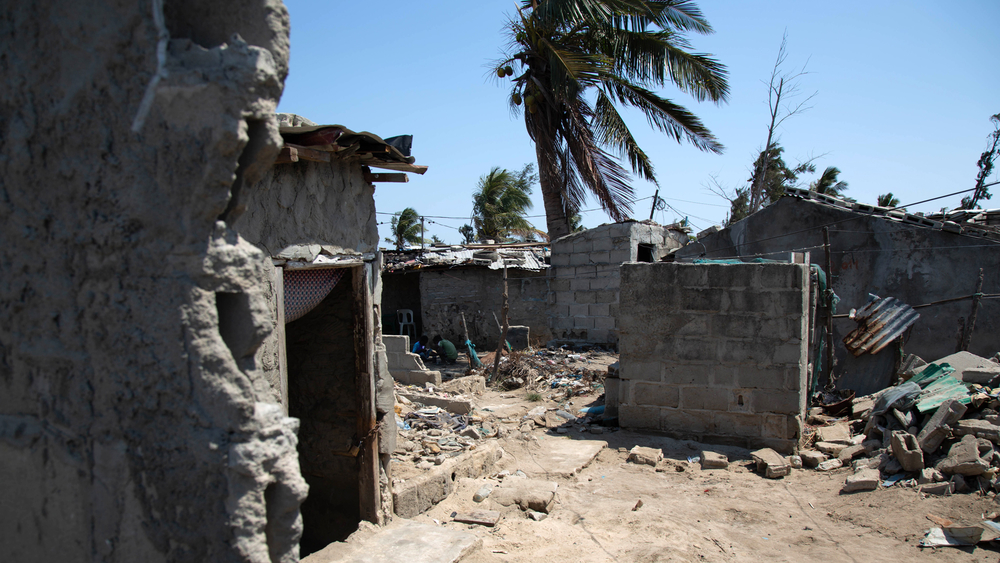 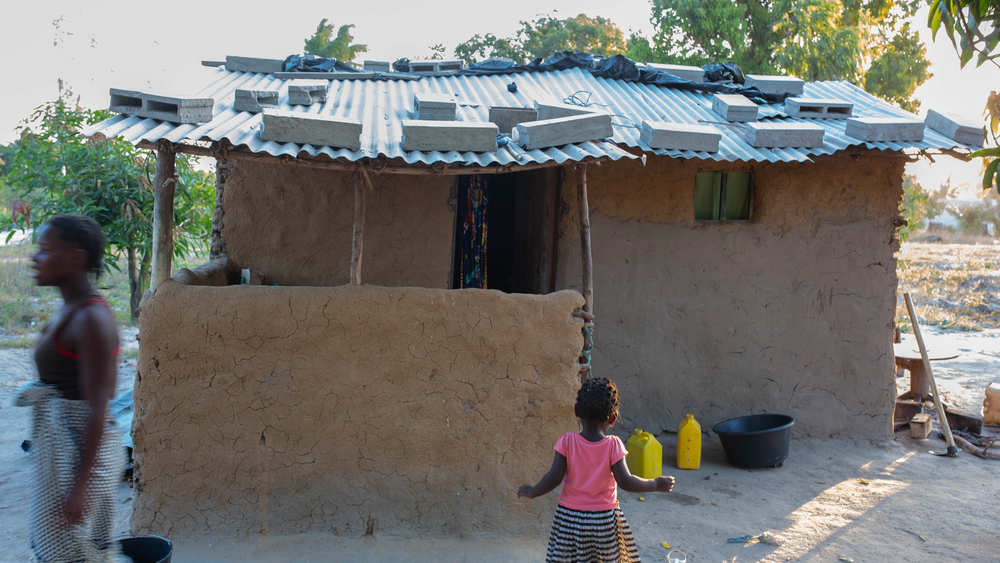 Philip Kleinfeld/TNH
Post-cyclone reconstruction efforts have yet to get going, leaving many homes ill-prepared for the coming rains.

Suspected Islamist insurgents have been staging attacks in Mozambique’s gas-rich Cabo Delgado province for the past two years, displacing around 65,000 people and leaving hundreds dead.

The violence has increased significantly in recent weeks following military operations that have dispersed the militants, who are lashing out against civilians in response.

Residents here are now facing a double misery as they struggle in the aftermath of Kenneth – the strongest cyclone to ever hit the African continent – and near daily attacks from the insurgents.

Unable to farm their fields for fear of bumping into the insurgents, many residents are going hungry.

The government has been reluctant to acknowledge the humanitarian crisis, while aid groups have focused their efforts mainly on the aftermath of Kenneth. Local residents are filling the gap by hosting and feeding displaced people.

Though the killers are commonly described as Islamists – recent attacks have even been claimed by so-called Islamic State – the group has not released a manifesto, has no public face, and a religious message has often proved hard to discern.

Most residents say they are unsure who is attacking them, while aid officials and researchers describe a multi-layered movement that is attracting a core of radicalised fighters as well as disgruntled locals, opportunistic criminals, and even some army defectors.

“There are many different elements within this group,” said the researcher, Chichava.

Residents here are now facing a double misery as they struggle in the aftermath of Kenneth – the strongest cyclone to ever hit the African continent – and near daily attacks from the insurgents.

Discontent is growing within the ranks of Mozambique’s opposition Renamo, after the ruling Frelimo party won presidential, legislative, and provincial elections in October by a landslide.

The bitter rivals signed a landmark peace accord in August – the third of its kind in Mozambique – but, as Renamo finds itself in the political wilderness, tensions are building once again.

Mozambique’s top court last month dismissed Renamo’s request for the results to be annulled. Analysts and a Renamo insider interviewed by TNH said some in the opposition now feel out of options and are considering a return to the party’s wartime base in central Mozambique.

“It’s going to get nasty,” said Yussuf Adam, a professor at Mozambique’s Eduardo Mondlane University. “There won’t be a solution to this war if the two sides don’t benefit.”

The Renamo Military Junta – a dissident Renamo faction that opposes the peace deal and Renamo’s official hierarchy – has meanwhile been blamed for a string of roadside attacks in central Mozambique.

“People want to travel and go to work, but with frequent attacks they are frightened,” said Osvaldo Américo, a victim of one attack who spoke from his hospital bed in Beira in a blood-splattered pink shirt.

Despite Frelimo’s election victory, the ruling party is grappling with the fallout of a massive hidden debt scandal – where loans to state-owned companies were concealed from Mozambique’s parliament – that triggered an economic crisis.

“It’s going to get nasty. There won’t be a solution to this war if the two sides don’t benefit.”

What are the other needs?

Food assistance is mitigating the worst effects for many households, but some are still facing “crisis” levels of food insecurity, according to FEWS NET.

“It's an additional burden affecting Mozambique and the region at large,” said Marc Nosbach, country director for CARE International in Mozambique.