A Sunday service in a church with no roof, a school so damaged its students have left, house after house still barely standing. In Praia Nova, a shanty town in Mozambique’s port city of Beira, the cyclone has long past but the damage remains as visible as ever.

This neighbourhood was the first to be struck when Cyclone Idai came barrelling through central Mozambique in March, submerging Beira – a town of roughly 500,000 people – before tearing west towards Zimbabwe and Malawi.

More than nine months on, the battered fishing community on Beira’s beachfront is a graphic reminder of how the city and the country are still struggling in the aftermath of one of southern Africa’s worst ever weather-related disasters.

Mozambique sustained an estimated $3 billion worth of damage after back-to-back cyclones – Idai in March and Kenneth a month later – made landfall. Hundreds of people were killed, hundreds of thousands displaced, and almost 2.2 million left in need of urgent assistance.

The disaster drew in a large number of aid groups who have spent months feeding and sheltering affected people. But on a trip last month through areas hit by the cyclones, The New Humanitarian found countless houses, schools, hospitals, and other public buildings remain severely damaged and many people are still living in emergency shelters.

Reconstruction – what so many residents here are asking for – is yet to get going, with emergency aid operations having taken precedence and pledges of long-term support for rebuilding still to come through.

That’s left residents across the country patching up their homes and communities on their own – most using the same materials that fell apart like stacks of lego when Idai and Kenneth came barrelling through.

With the rainy season now underway – heavy showers lashed Beira earlier this month – the fear is that their cobbled-together homes will come crashing down again.

“You’re always thinking, if the rain comes, everything will be destroyed,” said Mauricio Celestino, a Praia Nova resident.

Following a pledging conference in May, donors offered $1.2 billion to help Mozambique rebuild and recover. But that money has not yet arrived and isn’t expected to until next year, aid groups said. The full reconstruction process is expected to take many years.

Some agencies have expressed frustration over the lengthy process and questioned why transitional shelters – stronger than plastic sheeting and tents, but cheaper than long-term housing – could not have been rolled out in time for the rainy reason.

Any reconstruction that happens in early 2020 will now be complicated by the rains, said Melvin Tebbutt, a shelter expert with CARE International. He explained that rain and humidity make it harder to dry bricks and that sandy roads could turn into mud, hampering aid operations.

Progress has been made in ensuring new buildings will be constructed to withstand future disasters, according to Wild Do Rosario, head of programme at UN-Habitat in Mozambique – the government has, for example, recently adopted “Building Back Better” standards developed by the UN.

But for now people aren’t building back better, they’re just building back. All across central and northern Mozambique, residents have pinned down their metal-sheet roofs with bricks, tyres, palm leaves and anything else they can get their hands on.

Some residents have avoided replacing possessions they lost during the cyclones, for fear their houses will be flooded again. Others have abandoned their villages altogether and moved to resettlement sites supported by the government and aid groups. Conditions there aren’t much better.

A neighbourhood in ruins 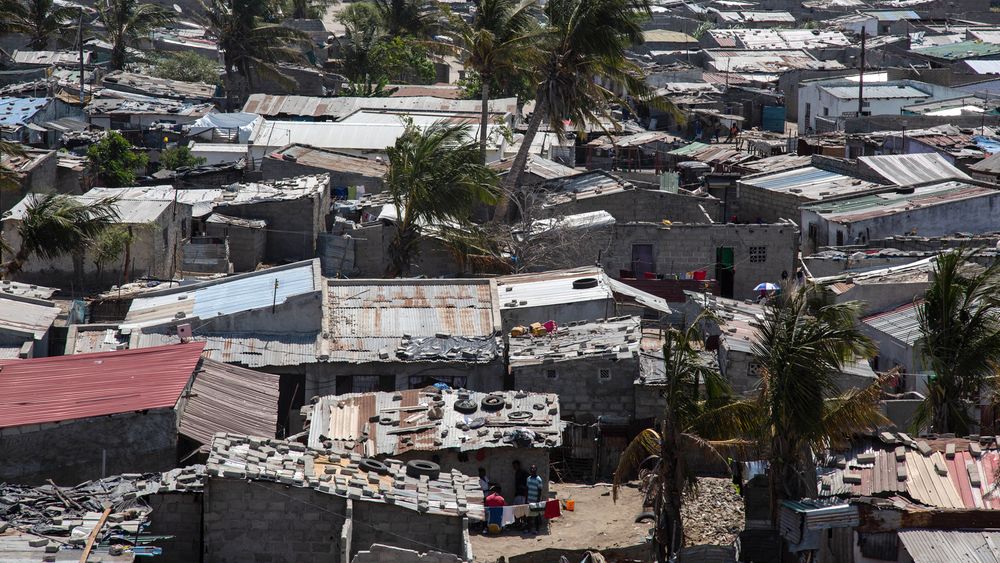 Built on the beach facing the Indian Ocean, the fishing community of Praia Nova was among the worst hit when Idai made landfall. With the rainy season already underway, much of the slum is still in ruins: piles of rubble sit where concrete houses once stood, roofs are pinned down with bricks, and people pray in makeshift churches covered with tarpaulins. Residents here question the lack of support from the government, particularly given the amount of money they believe was spent by the ruling party on canvassing during presidential elections in October. “We need to reconstruct, but we don’t have materials,” said António Martinho, a local fisherman. 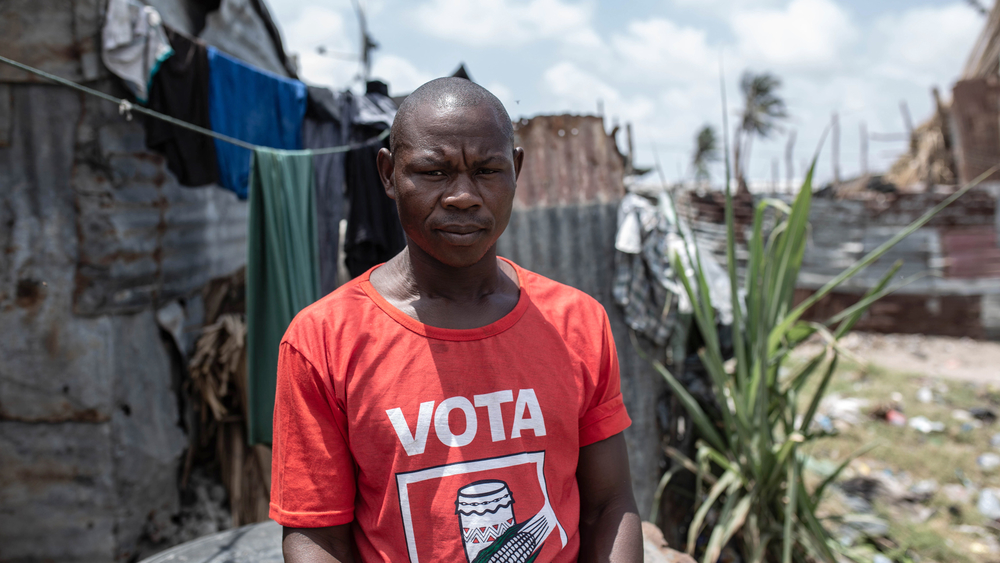 Mauricio Celestino’s house in Praia Nova was destroyed by Idai. The hairdresser rebuilt it using the little resources he had – “a metal sheet here, a metal sheet there”, as he put it. But it’s far from stable, and Celestino said he struggles to rest at night for fear of waking up without a roof. “You can’t sleep well,” he said, adding that he plans to move to another neighbourhood when he has the money to do so. Some 240,000 houses were damaged by Idai – which had wind speeds of up to 170 kilometres per hour – while more than 100,000 were completely destroyed. 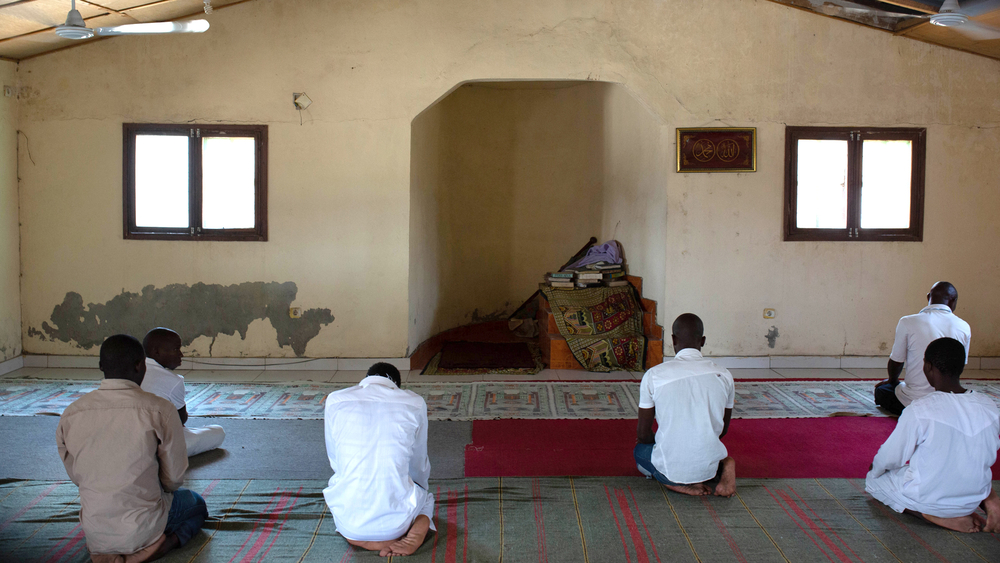 Reconstruction of the main mosque in Praia Nova started a month after Idai struck. Help didn’t come from the government or aid groups though; it came from a member of the local religious community – who donated money for materials – and local builders, who gave their time. “We didn’t expect [the government or aid agencies] to come,” said Isak Ismael, the local imam, “so we started rebuilding ourselves”. The government of Mozambique has set up a cabinet for reconstruction – known as GREPOC – but delays in funding mean it will not be operational until next year.

‘A strong wind would destroy it again’ 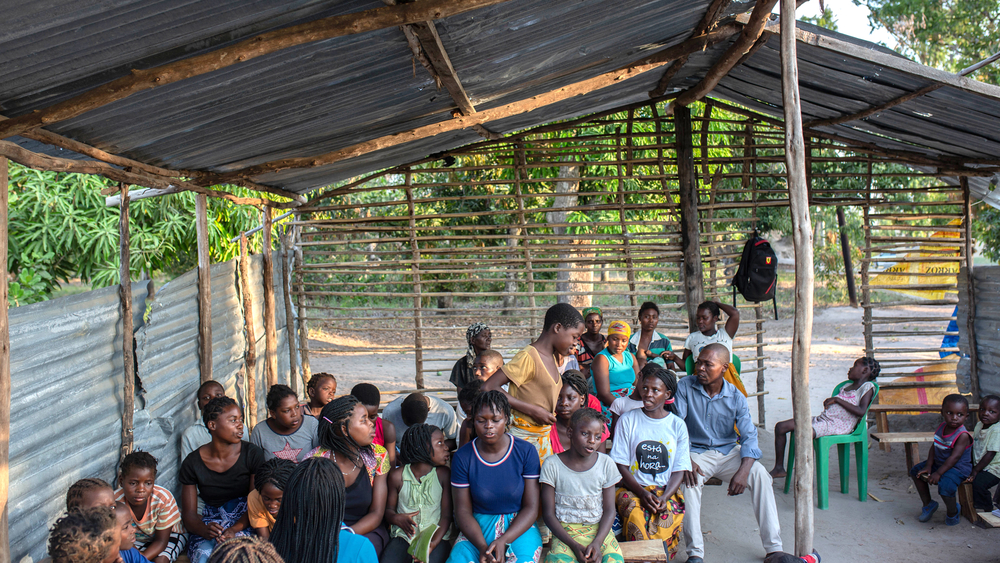 A church choir practises ahead of a Sunday service in the city of Dondo, an hour’s drive from Beira. The small church with a congregation of 170 was “completely destroyed” by Idai, said pastor Simone Taimo. After two weeks, the community started rebuilding, but it didn’t have the resources to finish the job. It currently has half a roof, no door, and walls held up by bamboo sticks. “A strong wind would destroy it again,” said Taimo. 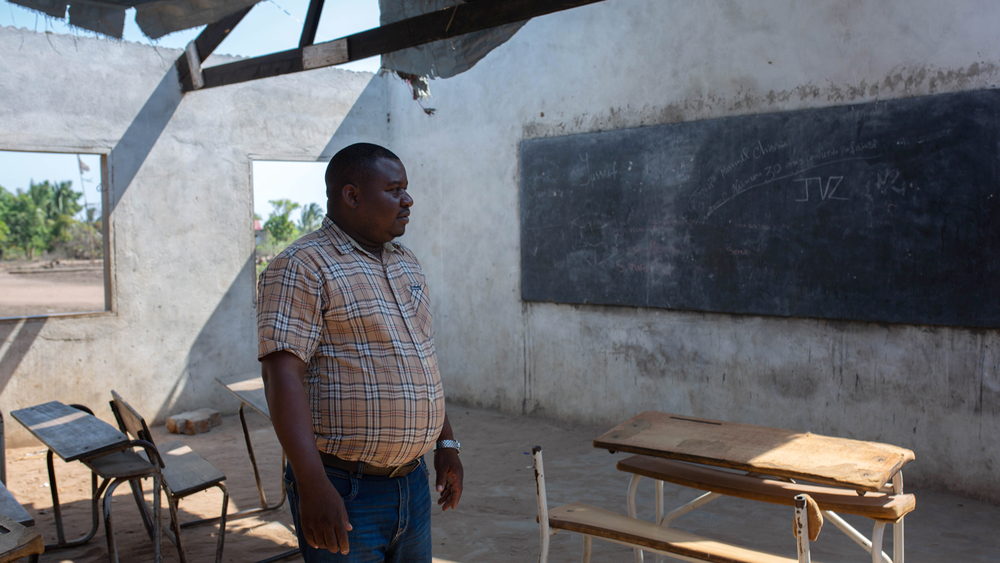 For two months after Idai, the secondary school in Guara Guara was used as a temporary accommodation centre for displaced locals. Now, the school is back up and running but classes get cancelled every time it rains as there’s no roof. An eight-week holiday started last month, said José Miguel, the headmaster (pictured), adding that “when the students return… it’s not clear the school will still be standing”. More than 600 schools were damaged by Cyclone Idai, according to UNICEF, disrupting education for some 300,000 children.

‘It won’t resist the rains’ 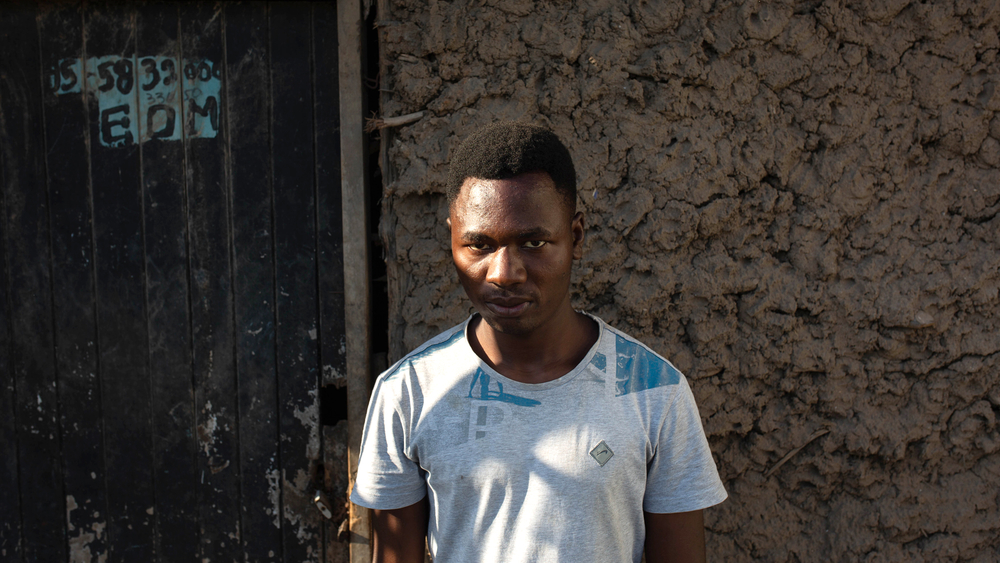 Planks of wood tied together with bits of frayed rope are all that hold up Joaquim Santiago Chapo’s mudbrick house in Guara Guara. His family rebuilt it after Idai hit, but parts remain damaged. With a metal-sheet roof held down with stones, Chapo said “it won’t resist the rains”. Guara Guara lies in Buzi district, another area badly affected by Idai. 110 people died here with many survivors evacuated on helicopters and boats, said district administrator Maria Roque. “We are still in an emergency,” she said.

Resettled but still at risk 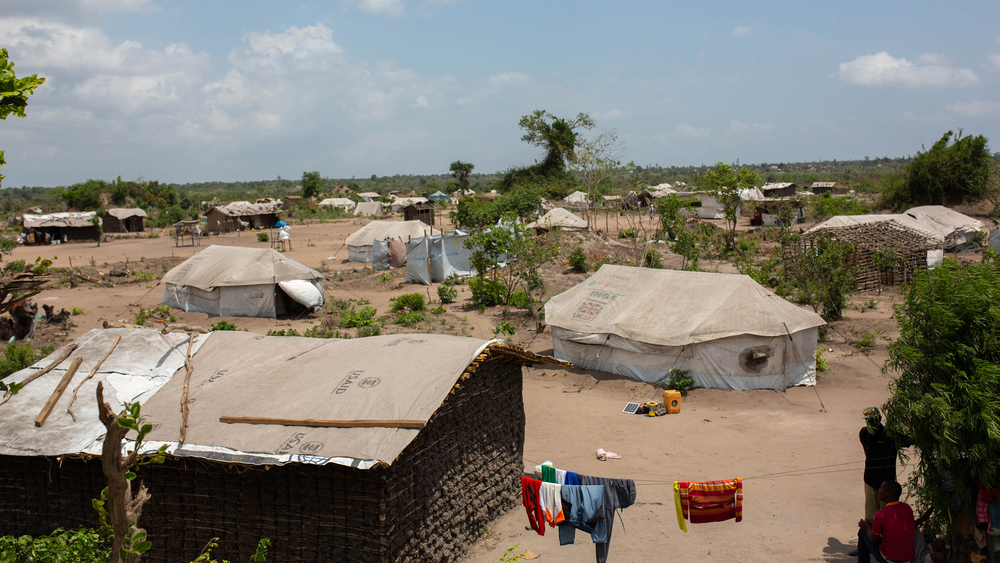 Around 90,000 cyclone survivors have been relocated to 66 supposedly permanent resettlement villages. The new sites are built away from low-lying, flood-prone areas but many are located in remote settings, lack basic humanitarian necessities, and the majority of residents are still living in emergency tents. With limited access to farmland and few work prospects, it is feared the residents may soon return back to their flood-battered villages – where they will be just as vulnerable as before.