First in a two-part series on the 16 and 17 December massacre in Yumbi. The accompanying photo essay includes personal accounts from survivors.
GOMA, Democratic Republic of Congo

Yumbi, a small farming and fishing town on the banks of the Congo River, is now mostly deserted.

Days before the Democratic Republic of Congo’s long-delayed December elections, chaos erupted – a massacre left at least 535 people dead over 48 hours and caused 30,000 people from the town and the surrounding villages of Bongende and Nkolo to flee.

Some 12,000 people who took refuge on river islands remain displaced in the territories of Yumbi and Lukolela. Another 16,000 crossed the river into neighbouring Congo-Brazzaville and are now living as refugees, mostly in the Makotimpoko and Gamboma districts.

In photos: Congo massacre survivors tell of canoe escapes and being left for dead

More than two months later, most people say they are still afraid to return home.

Shelter, food, and mental health services for traumatised survivors are all in urgent demand. Assistance has so far been minimal. The remote location of Yumbi complicates the response as it takes three days to arrive by land from Kinshasa, or one day by boat up the Congo River. 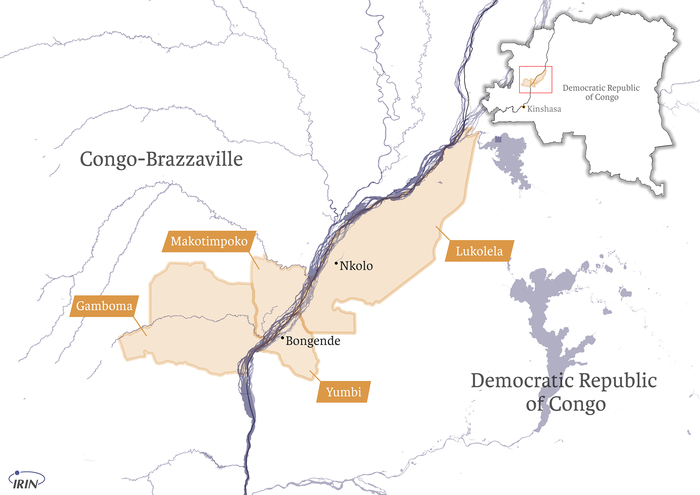 Médecins Sans Frontières, currently the only aid organisation on the ground, said the situation may worsen with the coming rainy season, which is also likely to bring infectious diseases including cholera, measles, and malaria.

Initial reports characterised the violence as intercommunal – Batende perpetrating attacks against minority Banunu – but subsequent reports from the UN and others have noted its “organised and planned” nature. Some witnesses have alleged local officials were involved.

Violent disputes and occasional clashes had been reported between the Batende and Banunu over land and resources in previous years, but never before had it reached anything like the scale of the 16 and 17 December massacre.

What are the immediate needs?

MSF, which responded within the first week of the violence in Yumbi, said it arrived to find that medics had fled and health facilities were damaged. The UN reported that homes and public buildings were also destroyed.

Not only will meagre shelters be destroyed if the islands flood, but cholera may reappear – MSF responded to an epidemic in Yumbi in March and April 2018. There are fears also of a measles outbreak, which could spread quickly in such precarious living conditions. The rainy months are also notorious for malaria, currently the main health concern.

Food is also desperately needed. People are unable to access markets or return to their fields and fishing equipment. Andriolo said his team had already treated 120 cases of child malnutrition – a number he expected to rise in the ongoing absence of aid.

Since no assistance has been provided to help rebuild damaged infrastructure and supply food in the towns or villages, the population has not yet begun to return. Many also refuse to return out of fear they may be attacked again.

What are the long-term needs?

Andriolo stressed the importance of long-term healthcare solutions in the region for when people do start to return, including support for mental health, since the brutality and subsequent trauma of the attacks is likely to have lasting effects.

“A lot of the population is extremely traumatised by the events, exhibiting insomnia, lack of hunger, and general lack of energy,” the MSF coordinator said. “Going back will reopen the trauma from seeing the places where the violence occurred.”

Communities have also been cut off from their livelihoods: the river where they fish, the fields where they farm, and the market where they trade. Many tools of trade and supplies were also destroyed in the violence. Homes and buildings will also need to be rebuilt. In total, 17 schools and 967 houses were destroyed, leaving many without a place to live.

What caused the violence?

Most sources say the violence was provoked by the burial of Banunu chief Mantuma Fedor on land the Batende claim as theirs.

The UN said the attacks “were conducted in a very organised manner and were most likely planned”. Witnesses claimed the attackers were positioned strategically at the entrances of villages during the massacre – which could indicate previous training or planning.

Early on 16 December, a young Banunu man travelled from the village of Bongende to a Batende village a few kilometres away. Upon arrival, he was killed. The Batende sent a messenger back to the other Banunu, warning: “we will come back to attack you”.

That afternoon in Yumbi, the attacks began, and continued for nearly three hours.

“I saw a team of visibly armed men coming from Yumbi’s centre… they began to massacre the population with guns and knives (machetes),” recalled Jule Bango Bobongo, a teacher at Kasobongala secondary school in Yumbi.

In an attempt to escape, many braved the waters of the Congo River, only to drown or be shot dead as they swam. “I was scared to die in the river,” Bobongo continued, “so I fled with others to the Yumbi hospital where we took temporary refuge.”

When the sound of gunfire stopped, they left the hospital only to find their homes burnt and corpses sprawled on the ground. “We began picking up the wounded to bring them back to the hospital,” Bobongo recalled. “I told myself that ordinary civilians could not organise such an operation on their own… we went home with death in our souls.”

By the evening, Dr. Bodo Molenga at Yumbi General Hospital had received a total of 133 wounded patients, 17 of whom died while receiving medical care. “It was really awful,” he said. “I saw some seriously injured people and some died in my arms.”

The next morning, on 17 December, the villages of Bongende and Nkolo came under attack; the slaughter lasted seven hours, according to witnesses. “I found more than 300 bodies in complete decay,” said Nestor Longota, a priest who returned to Bongende from Kinshasa after the attack. “It was horrible, I saw bodies of children, mutilated women young and old who littered the earth for a whole week.”

Dr. Molenga organised with the local Red Cross committee to bury the bodies. “In Bongende we dug four mass graves for 400 visible corpses,” he said. “But even today other corpses remain stuck between the walls of crushed homes and other bodies.”

With more burial sites possibly still to be discovered, the eventual death toll could be as high as 800 – excluding an unknown number of people (estimated to be dozens) who drowned in the river while escaping and whose bodies will likely never be recovered.

There are allegations that Congolese armed forces, police, or local authorities may have somehow been involved, but there are several competing theories and no clear evidence to implicate any official actors.

Nestor Longota, a priest in Bongende, said he spoke to a Congolese naval officer who recognised some of his navy colleagues and police officers among the attackers. “How can a village like Yumbi, the largest one in the territory, be attacked for two days with no defense or military intervention?” Longota asked.

One Batende man, who wished to remain anonymous for safety reasons, told IRIN that the security services and local administration were “in agreement” with the attackers. He and many other survivors pointed the finger at the Bana Mura, Joseph Kabila’s presidential guard. 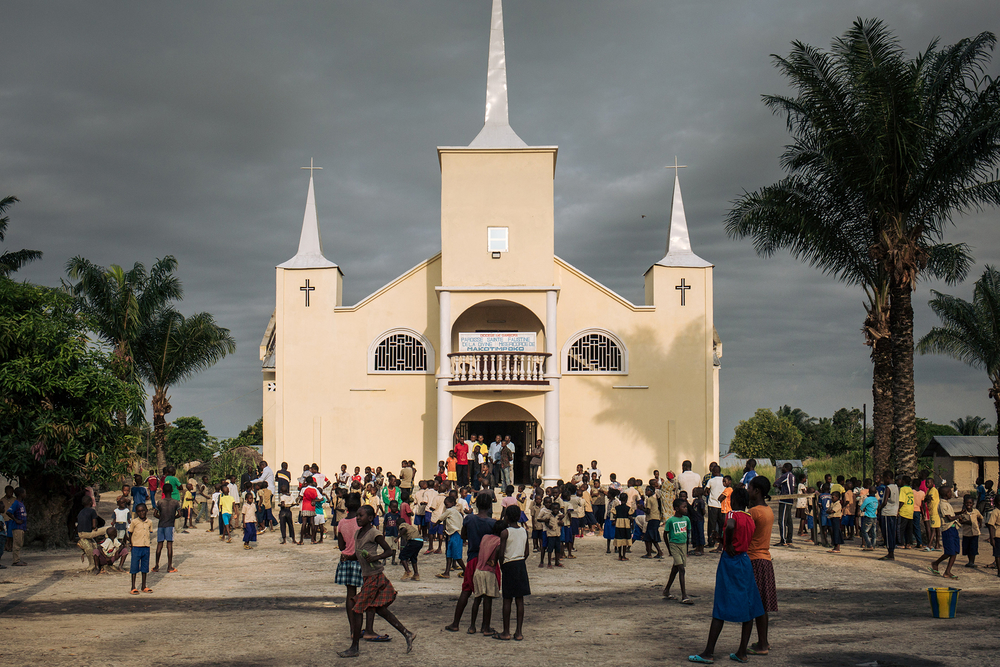 To some, the alleged involvement of the military and police suggested voter suppression ahead of the elections that finally took place on 30 December, as the Banunu generally support the opposition and the Batende back Kabila.

Opposition leader Felix Tshisekedi’s victory in the election marked Congo’s first orderly transfer of power since independence in 1960. However, independent vote monitors found Martin Fayulu, another opposition candidate, to be the winner, and there are allegations – denied by both parties – that Tshisekedi and Kabila struck some kind of deal.

Due to the violence, Congo’s government postponed the vote in Yumbi from December until 31 March, a delay also imposed on the Ebola-affected cities of Beni and Butembo in the east.

While the fighting has ceased in the months following the massacre, tensions between the two communities remain, and the Banunu who continue to live in Yumbi talk of sleepless nights, dreading that their attackers may return.

Those interviewed by IRIN nearly all stressed the importance of reconciliation among the two communities.

The Batende man who spoke to IRIN said: “Many of us [Batende] did not want this tragedy to happen and denounce it as barbarism… we want justice to be served and the perpetrators to be punished. The truth must be known after the investigations, and the two communities must come to terms [with it].”

Local authorities, in conjunction with the Congolese military, are now urging people to return in time to vote later this month. But the date hardly seems feasible given that thousands remain displaced, many of them far away and some in neighbouring Congo-Brazzaville.

“The government should first investigate the situation and respond to emergencies in Yumbi… and elections can come in two to three months,” said Jule Bango Bobongo, a teacher at Kasobongala secondary school in Yumbi.

“Who is left to vote?” asked Priest Longota, “Everyone has been killed or displaced.”

(TOP PHOTO: An MSF nurse provides care to displaced people now living Moniende island, in the middle of the Congo River, after they fled the massacre in Yumbi in December. CREDIT: Alexis Huguet/IRIN)