The jungle has edged into fields left untilled. It has crept onto thatched-roof houses turned to ruins; and it has stretched over empty highways once used to transport bananas, beans, cassava from a region long-known as Congo-Brazzaville’s breadbasket.

For nearly two years, militia fighters and soldiers manning dozens of checkpoints were the only signs of life in Congo’s Pool region, 50 kilometres west of the capital, Brazzaville.

Now, some of the 108,000 people who fled their villages during the 2016-17 conflict between the Congolese army and the “Ninja” rebels are returning home following a December peace agreement.

But with houses and villages destroyed by the military, schools and healthcare centres unstaffed, and fear that conflict may return, many Pool residents have chosen to remain displaced or have returned to poverty and hardship. 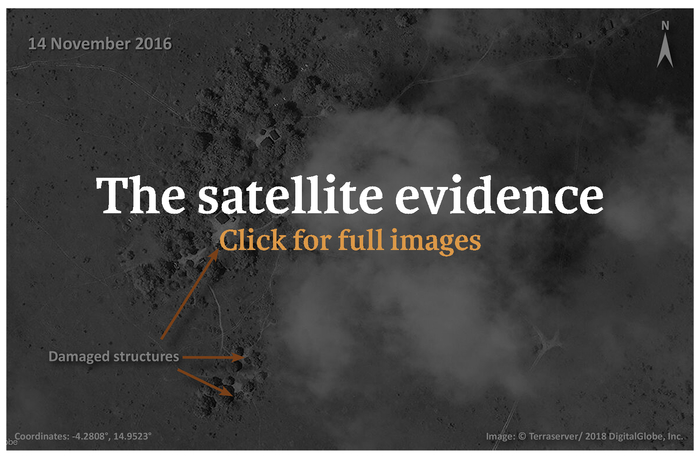 Yvonne Massembo, 70, fled her home in a town called Goma Tsé Tsé during the conflict. While life as a displaced person in southern Brazzaville has been hard, the mother of five, who is still living in the capital, said returning to her village would make life even harder.

During the conflict, her small mud-hut house collapsed after the roof was stolen. Equipment from her local hospital was looted. The canoe she once used to cross the river Djoué and reach her farm was destroyed.

Last December, IRIN was the first international news organisation to gain access to the Pool region in 20 months, to document crimes against civilians by the Congolese army and Ninja rebels.

The southern part of the country had been sealed off as fighting raged in a conflict that took hold shortly after the March 2016 presidential elections, in which Denis Sassou Nguesso retained a post he has held for all but five years since 1979.

☰ Read more: The history of the conflict

The elections were marred by allegations of fraud and followed a contested constitutional referendum a year earlier that had removed term and age limits for his post.

After the poll results were made public, a series of attacks were carried out in Brazzaville against government, police, and military buildings in opposition strongholds.

The government blamed the Brazzaville attacks on the Ninjas, a militia group that opposed Sassou Nguesso during civil wars in the 1990s and 2000s but had largely demobilised.

Although the group’s leader, Frédéric Bintsamou, better known as Pastor Ntumi, denied responsibility for the post-election violence, the government attacked the villages and jungle of the Pool region, where Ntumi and remnants of his group were known to shelter.

Sporadic clashes continued for nearly two years, as the army locked down the region. More than half of the population of eight rural districts of Pool sought refuge in nearby towns and in Brazzaville, leaving the Pool region almost entirely deserted.

Now, life is slowly returning. The World Food Programme estimates that in some districts, such as Kimba, nearly all of the displaced residents have returned. Apart from the heartache of living away from home, the price of staple foods like cassava and rice rose dramatically during the conflict last year and is propelling many to come back to their fields.

Humanitarian access has also improved, particularly in northern Pool, where villages were previously cut off by the military.

“We have been able to do [food] distributions and assessments in places we couldn’t previously reach,” said Jean-Martin Bauer, World Food Programme country director in Congo-Brazzaville.

Alain-Robert Moukouri, secretary-general of Caritas Congo, an NGO that delivers humanitarian assistance in the Pool area, said the Ninjas have now removed their checkpoints and the army has stopped harassing people for money at theirs. Businesses in towns that had long been inaccessible are now operating.

But beginning life anew is proving difficult in villages that were severely damaged during the conflict. In a village called Soumouna, where the government suspected Ninjas were based, 86 structures were destroyed between late February and May 2016, according to satellite images obtained by IRIN. This time period coincides with the army’s attacks.

The satellite data shows houses were also destroyed in Kindamba Gouéri, Mayama, and Malengo, while parts of villages were set on fire by ground troops, according to multiple interviews conducted by IRIN in Pool last December. A humanitarian worker based in the region described the military’s campaign as “scorched-earth”.

“There is nothing left,” said Massembo from Goma Tsé Tsé, explaining why she cannot return. “All the houses were burned.”

Displaced people are also returning to scarcity. During the conflict, fields became unsafe, causing two planting seasons to be missed. Today, many villagers are unable to feed themselves.

The UN has spent $13 million assisting displaced people with food, money, and basic goods. Bauer of the WFP said his team has reached “a substantial number of people”.

But needs remain vast. Bauer recently met a woman at a health centre near the capital, Brazzaville, who had returned to her village in Pool but left shortly after because she could not find food.

“When she got back she said there was nothing there,” Bauer explained. “Her child became malnourished, so she had to come back to Brazzaville.”

Lack of basic facilities in villages is compounding the problem. Most health centres were shuttered during the conflict. Half the primary schools in the Pool region have been closed and 65 completely destroyed, according to the UN. In districts like Vindza, all the schools are closed.

“Life has to be rebuilt,” said Bauer.

Previous peace agreements between the Ninjas and the government have also failed, casting doubt on whether the ceasefire will last.

In the December agreement, the Ninjas agreed to demobilise, dismantle their checkpoints, and turn in their weapons. In exchange, the government promised “free movement” for Ninja leader Frédéric Bintsamou, better known as Pastor Ntumi – meaning he wouldn’t be arrested.

While no clashes have taken place since December, Ntumi is still hiding in the forests of Pool, and many of his fighters have not given up their weapons.

A Ninja spokesman, who asked not to be identified, said Ntumi is worried that an arrest warrant still hangs over his head. IRIN’s request to talk with him directly were denied.

“There’s no freedom of movement” as promised in the peace agreement, the spokesman said, because “until now, many of those who have been arrested are still in prisons.”

The Ninja spokesman added that local people are sceptical that peace has been reached, “because there is military in the villages”.

“There are more soldiers in the villages than locals,” he said. This perception, he added, keeps people from returning.

Bauer confirmed that in some cases only men have returned to tend to their crops, leaving their families in safer locations.

Rather than seeking a genuine end to the conflict, Sassou Nguesso’s motivation for signing the agreement was influenced by economic factors, said Brett Carter, assistant professor at the University of Southern California.

One of the largest oil producers in the region, Congo-Brazzaville has been hit hard by declining prices for global crude. Skyrocketing public debt and unpaid salaries and pensions for civil servants have forced the president to ask the International Monetary Fund for a bailout.

But talks with the IMF have dragged, with military activities in Pool undermining “Sassou Nguesso’s claims to transparency and good governance, which the IMF rightly recognised as dubious anyway,” said Carter.

Since changing the constitution to allow him to stay in power, Sassou Nguesso has also faced growing opposition to his power. Stalwarts of his ruling Congolese Labor Party (PCT), including Charles Zacharie Bowao and Andre Okombi Salissa, have turned against him. Even his own son, Denis-Christel, has suggested he may stand against his father in elections scheduled for 2021.

In response to these threats, Sassou Nguesso has turned to “full-scale authoritarian mode”, said Fonteh Akum, senior researcher at the Pretoria-based Institute for Security Studies. In May, Jean-Marie Michel Mokoko, a former army general who stood against Sassou Nguesso in the 2016 presidential elections, was jailed for 20 years for “undermining the internal security of the state”. Salissa, meanwhile, is expected to face trial on the same charges this month.

Unsure who to trust, Sassou Nguesso is likely to remain wary of the long-restive Pool region which represents, said Akum, “the one space from which military contestation against Sassou Nguesso’s government could actually emanate”.

Rather than an “artificial” peace agreement, what is needed, said Akum, is a truth commission that can establish the root causes of the latest bout of violence in the Pool region and its consequences for civilians.

“Those facts would be able to create some kind of understanding for who is held accountable and who needs to pay reparations for crimes committed,” Akum said.

For now, the residents of Pool have received little closure or assistance from the government.

“I don’t have shelter and my village has been ravaged,” said a 69-year-old currently living in Brazzaville, who gave his name as Makoudou. He said his house, in a village near Vindza, had been partially destroyed by bombs during the conflict, and the tools he needed for work had been taken.

“That is what is preventing me from going back,” he said.