When the third round of talks* aimed at revitalising the chances of peace in South Sudan gets underway in Addis Ababa on 26 April, the country’s influential former military chief wants to be at the table.

Paul Malong’s announcement on Tuesday, 10 April, that he was launching a new opposition party added an extra element of uncertainty into the mix ahead of potentially pivotal talks aimed at restoring a permanent ceasefire and reviving a collapsed 2015 peace agreement.

More than four million people, one third of the population, have fled their homes since South Sudan’s brutal war began in December 2013, creating the largest refugee crisis in Africa since the 1994 Rwandan genocide, and parts of the country have plunged towards famine.

Malong’s group, the South Sudan-United Front, is one of as many as 14 opposition groups seeking to join the discussions in the Ethiopian capital on 26 April, many of which already see the Intergovernmental Authority on Development (IGAD) process as discredited.

Announcing the formation of his new group from exile in Kenya, Malong said he wanted to “arrest the carnage” of South Sudan’s ongoing war, stating that President Salva Kiir “has concentrated all his efforts, with the help of a small clique around him, to quite literally loot the coffers of our great nation to total bankruptcy.” 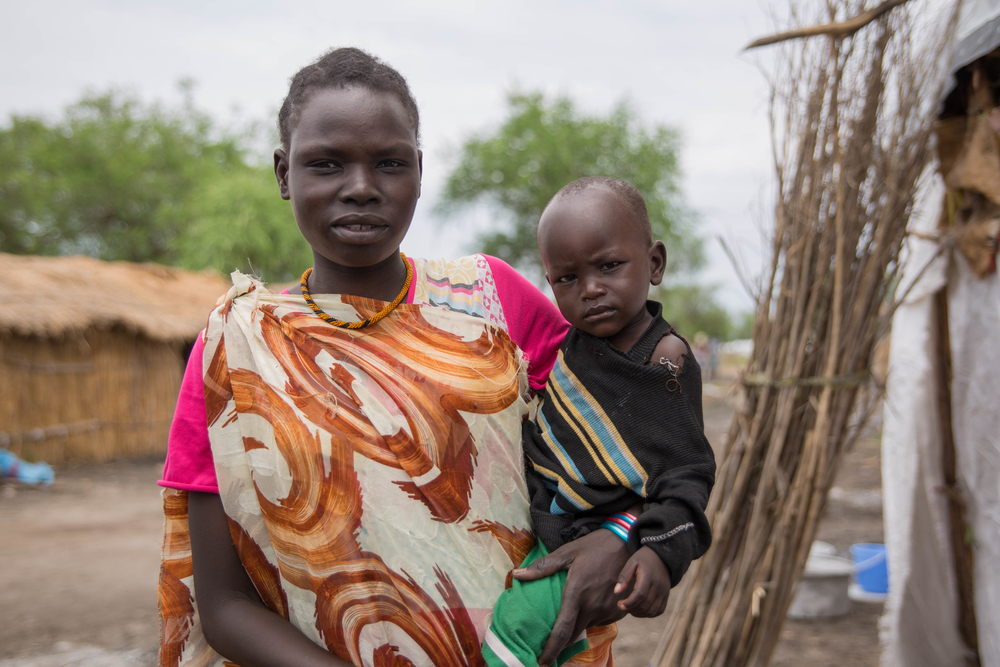 Stefanie Glinski/IRIN
After fighting erupted in her village in Upper Nile last year, Rose, 26, has fled to Aburoc, in the northeast of the country.

Malong’s new grouping is being portrayed both as a political party and as a form of rebellion, but experts say any large-scale military ambitions he may harbour are likely in their infancy.

“Malong has yet to show the capability to launch a potent rebellion,” explained Alan Boswell, conflict analyst and Sudan expert for Small Arms Survey, a Geneva-based group focusing on armed violence. “The declaration of his rebel movement is a political move, not a military one. He is seeking to legitimise and protect his interests during the political process in Addis Ababa.”

South Sudan’s war began after Kiir, an ethnic Dinka, accused his former deputy Riek Machar, an ethnic Nuer, of attempting a coup. Fighting has since killed more than 50,000 people, with the Sudan People’s Liberation Army (SPLA) and the SPLA-in-Opposition (SPLA-IO) the main parties to the conflict.

A peace agreement was signed in August 2015, during Malong’s time as army chief, but the war has since splintered into myriad inter- and intra-communal conflicts, incorporating previously localised disputes over land, resources, and power. Observers say the dynamics change almost daily.

Peace talks have continuously failed and the security situation is unpredictable at best in many parts of the country. The nation is largely divided along ethnic lines – especially since the creation of new states, now a total of 32 – and traditional front lines are changing into widespread guerrilla warfare, with numerous militias also involved in the fighting. 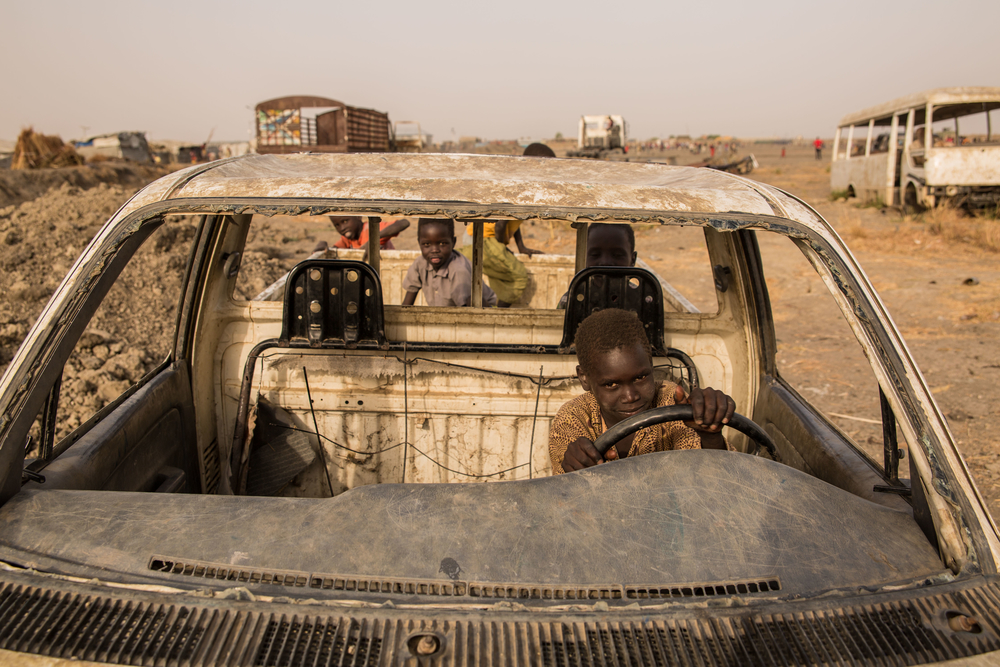 Stefanie Glinski/IRIN
Destruction is evident in Malakal, once South Sudan's second city but now largely deserted. More than 24,000 people now live in a UN protected camp on the outskirts of the town.

The IGAD-led peace process has proven difficult to resurrect. Opposition groups say IGAD partner states Uganda and Kenya (accused by the UN of fuelling the conflict by supplying weapons) are on Kiir’s side. Some are arguing for the African Union and the UN to take over.

While some observers still back the IGAD process and think it’s important to give it the best chance possible, others see it is an outside intervention that has already failed and blame it for helping to further fragment the conflict.

The mandate for Kiir’s transitional government is due to run out in July and a government spokesman warned on Friday, 6 April, that any foot-dragging during negotiations by the opposition could lead to fresh elections.

The UN has warned that any attempt to hold elections before the country is in a more stable environment only risks deepening and extending the conflict.

With time running out, achieving some progress in the next round of talks is paramount. But the omens for steps towards peace aren’t looking great. “It’s the national dialogue that will move this country forward,” First Vice President Taban Deng Gai said last month during a speech in Yambio. “It needs to happen in South Sudan; it can’t happen in Addis.”

As the picture is muddied ahead of the peace talks in Addis Ababa, here’s a quick look at Malong’s new group and some of the other main protagonists:

The jury may still be out on whether Malong’s primary intentions are political or military, but his new SS-UF group could become a major factor on the front line as the former army chief likely still enjoys considerable support in his hometown of Aweil and the surrounding Bhar-el-Ghazal region.

The main opposition group, the SPLA-IO, is already actively encouraging Malong’s military ambitions. “His movement is a big threat to the government, because he will fight in areas that we have never reached, like the Bhar-el-Ghazal region,” SPLA-IO spokesman Lam Paul Gabriel said, adding, “Malong will expose a lot in the peace negotiations, making it difficult for the government to handle the pressure.”

Malong has announced his intention to join the talks in Addis Ababa, but it’s not yet clear if he will be permitted to participate in the negotiations.

“Malong is a hardline defector from within Kiir’s Dinka power base,” explained Boswell. “The main threat he poses is from within Kiir’s coalition rather than from outside. If Malong is invited to join the peace process, then the government will protest and could use it as a pretext to roadblock the process.”

Serving as governor of Northern Bhar-el-Ghazal between 2008 and 2014, Malong was made chief of the army in January 2014. In May 2017, he was sacked and placed under house arrest in South Sudan’s capital, Juba, until he fled while supposedly seeking medical treatment. He now lives exiled in the Kenyan capital, Nairobi.

South Sudan’s government-controlled army was founded in 1983 by ‘father of the nation’ John Garang. A collection of smaller militias such as the Mathiang Anyoor, which Malong was accused of controlling and which are accused of human rights atrocities, normally support the government.

Loyal to Machar, the SPLA-IO is the SPLA’s main opponent. It usually has the support of some smaller youth militias such as the White Army in Northern Jonglei. Government accusations that Machar and the SPLA-IO were planning a coup resulted in the start of the civil war on 15 December 2013.

After new fighting erupted in the capital Juba in July 2016 and Machar fled the country, Taban Deng Gai was instated as the new first vice president. Some members of the SPLA-IO were loyal to Taban Deng and now still support Kiir’s government. This nominally opposition faction loyal to Taban Deng remains a separate entity from both the SPLA and the SPLA-IO in most parts of the country, but is pro-government. Most of the opposition forces across the country are an array of local, non-Dinka ethnic groups.

The Agwelek forces have fought both alongside the SPLA and the SPLA-IO (those loyal to Machar). Primarily focused on defending Shilluk land in South Sudan’s Upper Nile, the group is predominantly loyal to Johnson Olony, believed to side with the opposition.

Most of the NAS rebels are from the country’s Equatoria region and were previously with the opposition loyal to Machar but later joined Thomas Cirillo Swaka, Kiir’s former deputy head of logistics who resigned in February 2017 and accused the president of turning South Sudan into a “tribal army”.

These ethnic groups are currently pro-government.

Western Equatoria has several armed groups, some of which recently signed amnesty agreements with the government, such as the South Sudan People’s Patriotic Front and the South Sudan National Liberation Movement (SSNLM). Many of the child soldiers released in Yambio in February were previously captured by the SSNLM.

Groups like the Gelweng (armed cattle keepers from Lakes State), the Mathiang Anyoor, and the White Army rely on local community structures. It is estimated that South Sudan has at least 40 different armed groups. New ones continue to emerge, particularly due to the conflict spreading to the Equatoria and Northern Upper Nile regions.

* UPDATE - Peace monitors announced on the 18th April that the third round of talks had been suspended until further notice.