East of Damascus, a long and brutal battle is coming to an end. After seven years, the rebel enclave in Eastern Ghouta is close to being fully recaptured by forces loyal to Syrian President Bashar al-Assad. The fallout for civilians is already painful and chaotic, and the future uncertain.

By the end of March, only Douma, Ghouta’s largest city, remained under the control of fighters from the powerful Islam Army faction. Rebels there have been accused of preventing civilians from exiting, and one UN estimate says up to 70,000 people may be trapped inside the city.

Two of the area’s three rebel pockets have already been cleared by the government, using a combination of raw military force and negotiations.

More than 30,000 inhabitants, most of them rebel fighters and their families, have been put on buses for rebel-held northern Syria as part of hastily arranged, Russian-brokered capitulation deals. Thousands of civilians are also thought to have opted to stay behind in recaptured neighbourhoods, while around 100,000 people – though estimates vary – have fled to surrounding areas and the greater Damascus region.

The rapid displacement has overwhelmed the international humanitarian response. According to Rachel Sider, an Amman-based advisor with the Norwegian Refugee Council, which works in the Ghouta region, this response was originally planned to handle less than a tenth of the current number of fleeing civilians.

Military operations in Eastern Ghouta started with a wave of often indiscriminate aerial bombardment in February. UN humanitarian chief Mark Lowcock recently said more than 1,700 deaths had been reported since late February, and an opposition tally seen by IRIN placed the number even higher, above 2,000.

As rebel control crumbled, Ghouta’s inhabitants began pouring out of the area in search of safety, food, medical care, and shelter. Syrian Arab Red Crescent volunteers have escorted civilians across the no man’s land, waving white flags in an attempt to ward off sniper fire. Aid workers on the ground report that many who arrive at the shelters are in poor physical condition. The enclave has been under siege for years, with little food and almost no medicine allowed in by government forces. The blockade on food was further tightened last year.

“We are seeing many medical cases and undernourished people,” IRIN was told by Sider. “People are extremely vulnerable.”

Civilians have been forced to find their way out of the war zone on foot, with Syrian state media reporting the arrival of more than 1,000 people from Douma on Thursday.

“People are very exhausted, as they spent days on the move before reaching the shelters, with the clothes they wear as sole belongings,” said Ingy Sedky, a Damascus-based spokeswoman for the International Committee of the Red Cross. “One woman was telling me that she had to throw on the road the few clothes she managed to bring for her and her children, as it became too heavy to carry them while walking for many hours before reaching the crossing point.” 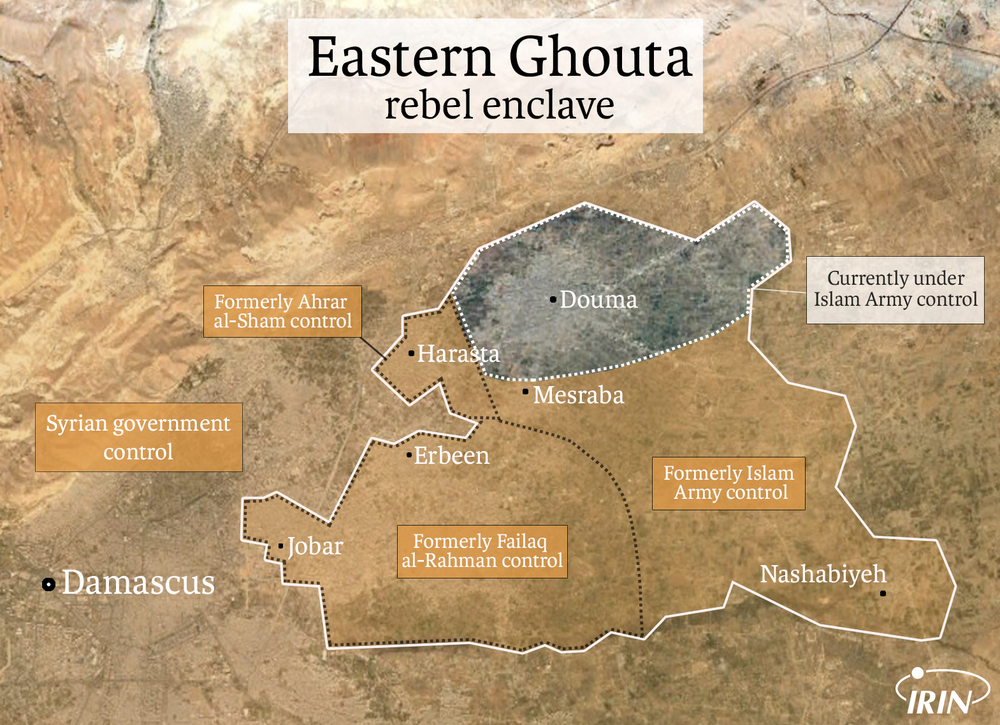 At least 10 shelters have been established in recent weeks. Civilians are housed in schools or other large buildings commandeered for the purpose, but conditions vary from shelter to shelter. Many are forced to sleep outside due to overcrowding, and the rapid influx of people has made it difficult to manage the sites effectively. Sider recounts how, in one case, a 1,000-person group of displaced civilians assisted by NRC swelled to 7,000 in one day and to 12,000 the next.

In the chaos, family members may end up in different shelters with children separated from their families. UNICEF is distributing plastic bracelets that parents can write names and contact numbers on to help trace missing children.

Aid groups are also providing mattresses, blankets, tents, medical care, and other necessities, as well as food. ICRC has assisted the Syrian Arab Red Crescent in providing bread packs for 15,000 people per day, and is also supporting collective kitchens to feed additional tens of thousands at the shelters.

In Adra, bread queues recently stretched so long that a UNICEF official reported that it took her 20 minutes to walk from start to finish.

“The main challenge for us is that thousands of newcomers keep coming and require assistance every day, new sites keep opening to host families and they are not equipped at all,” explained Sedky. “This makes it very difficult for humanitarians to make a proper planning to cover the needs.”

In late March, however, there were some signs of relief. The shelters now hold 47,000 people, which is down from a peak of more than 75,000 a few weeks ago. Earlier arrivals are trickling away toward Damascus, where many have relatives, and some have reportedly turned back to their homes inside formerly rebel-held areas.

Government treatment of the displaced

While women, children, and the elderly appear to be allowed to move out of the shelters, sources say boys and men between 16 and 50 years of age must first go through a screening process known as taswiyat al-awdaa, “settling of status”. This is the government’s term for a quid pro quo process that involves being amnestied for political crimes (defined by the government as both armed violence and peaceful expressions of dissent), in return for registering with authorities and forswearing any involvement in the opposition.

After the retaking of the rebel enclave in eastern Aleppo in late 2016, many men were reportedly subjected to military conscription, which is mandatory in Syria. There were also some reports of politically motivated arrests and hostage-taking of civilians related to rebel commanders.

Sider noted in an email to IRIN that many civilians in the shelters seem to feel “fear and uncertainty of the future”.

Information is very scarce, not least because there is no independent media access to the displaced. So far, there have been no credible reports of mass arrests, killings, or other major abuses at the shelters. However, there are anecdotal reports of sporadic ill-treatment and humiliation of displaced civilians.

In a video clip that spread widely online last week, Syrian parliamentarian Mohammed Qaband was seen screaming at arriving civilians that they must praise Bashar al-Assad if they wanted water, which he was handing out near a frontline crossing. Aid workers have also witnessed troops verbally abuse fleeing civilians, and pro-government fighters have helped themselves to supplies intended for the displaced.

The situation inside former rebel areas, where thousands or even tens of thousands are thought to remain, is even harder to ascertain. Syrian Minister of Reconciliation Ali Heidar has said people displaced should return to their homes “as soon as possible”. But given the extensive destruction and the fact that areas like Harasta were looted by loyalist militias after rebels left, it is unlikely that Eastern Ghouta will be able to reabsorb all who fled – never mind the tens of thousands of previously displaced, long since scattered across Damascus and other parts of Syria.

Opposition sources claim that a pro-Assad militia led by Sheikh Bassam Difdaa has arrested and arbitrarily executed people in the recently retaken Kafr Batna and Saqba areas. IRIN was unable to confirm these allegations.

Douma has remained in the hands of the Islam Army even as other areas have fallen to the government. In the past weeks, government troops have been camped on its outskirts, with a military source warning in the pro-Assad daily al-Watan that unless Islam Army members and their families surrender and leave the city, they will face “a huge military operation”.

Aid and UN officials have noted that all population estimates for the area are extremely uncertain. However, using the UN’s own rough tallies, the combined number who either left for Idlib, fled to the Damascus area and the shelters, stayed in Ghouta, or are still in Douma, may add up to approximately 200,000 people. UN estimates of some 392,000 inhabitants in the wider Ghouta enclave before the offensive appear exaggerated, confirming a pattern previously seen in eastern Aleppo and other besieged areas.

Civilians have reportedly been banned from leaving Douma by the Islam Army, and some appear desperate to get out. Though some inhabitants have in fact been let out of the city, especially in recent days and as part of agreed-upon prisoner swaps and medical evacuations, boys and men of fighting age appear to have been banned from exiting, which effectively traps their families, too.

“We have heard reports from people inside Douma that they are being prevented from leaving by non-state armed groups and that there is fear of getting shot at while trying to leave,” said Linda Tom, a Damascus-based spokeswoman for the UN’s emergency aid coordination body, OCHA, in an email to IRIN earlier this month. “Others didn’t feel safe leaving due to the heavy fighting, including aerial bombardment,” she added.

Islam Army leaders reject the accusations. “As for what some people say about us banning civilians from leaving, this is completely false,” senior Islam Army leader Said Darwish told IRIN in mid-March, insisting that Ghouta’s civilians were voluntarily “standing firm with their people and their holy warriors on their land.”

According to Darwish and other sources in Douma, the group has told Russian negotiators they are willing to discuss an agreement that would let the Islam Army stay in the area, though it is unclear how such an arrangement would work. Salafi preacher Osama Hawwa said any deal must guarantee the civilian population’s right to remain in Douma and “also find an acceptable form for individuals in the Islam Army faction to stay”.

Mohammed Bayraqdar, a senior Islam Army leader contacted late March, said: “The Russians are making one single offer and that is for the fighters to leave. The Islam Army has rejected this offer and demanded the evacuation of those civilians who want to leave for a place of their choice, but the Russians refused. Until now, the Islam Army leadership remains decided to stay and resist.”

The Syrian and Russian governments could not be reached for comment, but on Friday afternoon the Russian government reported that the rebels had agreed to leave Douma. An Islam Army spokesperson swiftly denied this.