This article is part of our in-depth coverage. Read more like this...
Part of a special project exploring violent extremism in Nigeria and the Sahel

Burkina Faso, Chad, Mali, Mauritania, and Niger are teaming up to take on Islamist militants with the launch of a the 5,000-strong "FC-G5S" force in the restive Sahel. But are more boots on the ground the answer?

UN Secretary-General António Guterres recently told the Security Council, which votes today on whether to fund the nascent multinational military force, that supporting it was “an opportunity that cannot be missed” and that failing to back it would carry serious risks for a region where insecurity has become “extremely worrying”.

The Security Council “welcomed the deployment” of the force in a resolution adopted in June, but put off a decision about financing. The resolution's wording was the subject of a prolonged tussle between France – the G5 force’s main proponent – and the United States, which didn’t believe a resolution was necessary, sees the force’s mandate as too broad, and, as the world body’s biggest contributor, isn’t convinced the UN should bankroll it.

On Friday, US Ambassador to the UN Nikki Haley said Washington wants to know “what the strategy would be, how they see this playing out, what’s involved in it, before we ever commit to UN-assessed funding”.

France has been working hard to win over the United States. On a visit to Washington last week, French Defence Minister Florence Parly said the former colonial power had no desire to become the “Praetorian Guard of sovereign African countries”.

In 2013 and 2014, France’s Operation Serval drove back militants in Mali’s northern desert from some of the towns and other sanctuaries they had taken. With attacks nevertheless continuing and having spread beyond Mali’s borders, 4,000 French troops are currently deployed under the banner of Operation Barkhane across all the G5 states.

Mali is also home to the 14,000-strong MINUSMA force, one of the UN’s most expensive peacekeeping missions. It has come under frequent attack by militant groups such as the Jama'a Nusrat ul-Islam wa al-Muslimin (JNIM), an al-Qaeda-linked coalition forged last March. Some 86 blue helmets have been killed in militant attacks since MINUSMA was established in July 2013.

Meanwhile, efforts by civil society groups to negotiate with some jihadist groups have come to nought, while parties to a 2015 peace agreement between Mali’s government and two coalitions of domestic armed groups – a deal that excluded the jihadists – are embroiled in violent divisions among themselves. Some of these domestic groups are also responsible for attacks against the state.

These divisions have dimmed hopes of forging any kind of common front against the jihadists, and even of properly implementing the 2015 accord. The government’s failure to address widespread political and economic grievance further undermines its position. 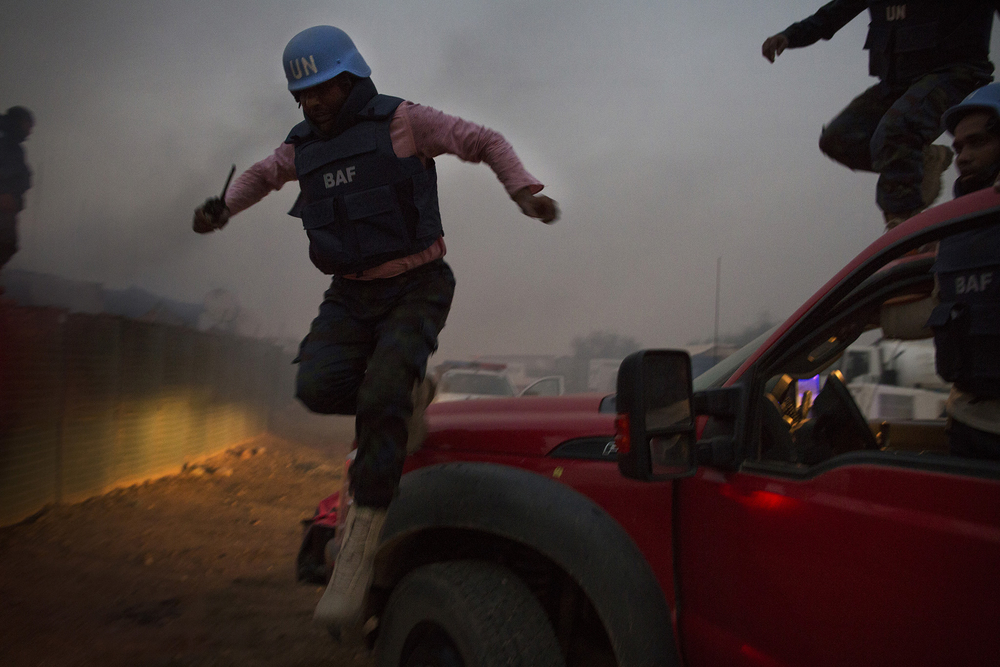 All this insecurity comes at a high price for Mali’s civilians. At the end of the 2016-17 academic year, 500 schools were closed, up from 296 the previous year, while the numbers of refugees and internally displaced reached a record 140,000 and 55,000 respectively.

Acute malnutrition among children under five has reached “critical levels” in conflict-affected areas around Timbuktu and Gao, according to UNICEF. The agency predicts that 165,000 children across the country will be acutely malnourished next year.

“Repeated criminal acts” prompted the International Committee of the Red Cross to suspend its operations in the northern Kidal region in mid-October.

The primary mandate of the G5 force will be to secure the bloc’s common borders and fight “terrorist” and criminal groups.

The force’s headquarters were established in September in the central Malian town of Sévaré, but its financing has yet to be secured.

“Estimates still vary; nothing has been settled,” said a diplomat who has followed the latest developments. “If we get to 250 million euros at the donors’ conference in December, that would be very good. But even if financing is obtained in December, the force will not be operational the next day.”

The G5 says it needs 423 million euros to set things up and run the force for its first year, but so far only a quarter of this sum has materialised, with the G5 and the EU both coming up with 50 million euros and France another eight million.

"Mobilising sustainable and consistent financial support over a period of several years will remain a significant challenge,” conceded Guterres in his report.

Money is far from the only uncertainty: Trust between G5 member states remains shaky.

“The Burkina military believe their Malian counterparts are ‘lazy’ and joined the army to get an income and not to defend the country,” the International Crisis Group said, for example, in its latest report on Burkina Faso.

And the security and political agendas of G5 states are not always aligned. Facing an economic and social crisis, regional powerhouse Chad, which already has troops in MINUSMA and in a separate regional force fighting Boko Haram, hopes to make the most of its involvement in the force, whose remit it would like to see expanded to include other regional threats closer to home. 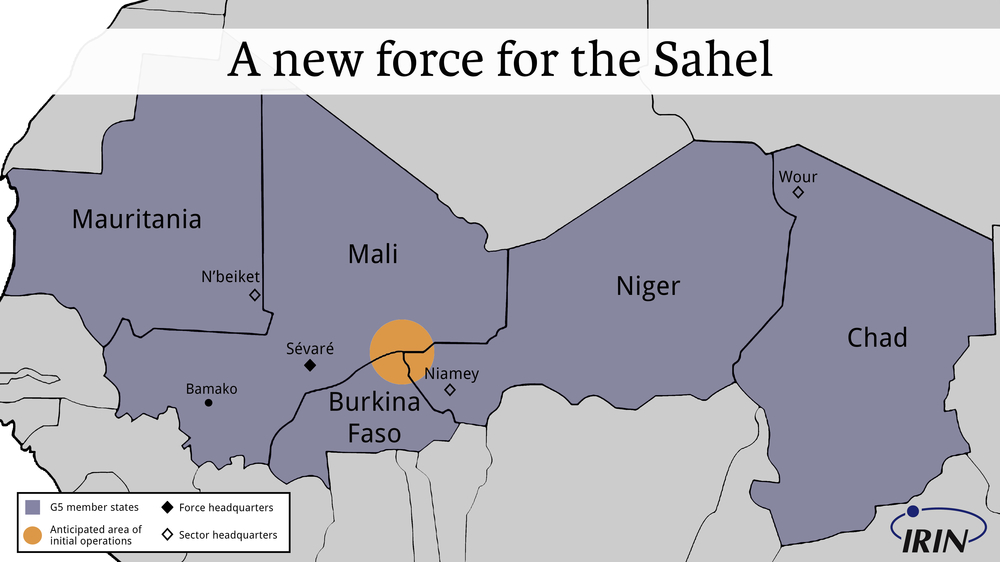 Given how often existing forces in Mali, including the army, are attacked (losing weapons and vehicles in the process), deploying yet more troops in the region carries a real risk of further boosting jihadists groups’ military assets.

“Malian armed movements have employed an increasing proportion of heavy weaponry from Malian government stockpiles – particularly ammunition for larger weapon systems such as rockets and artillery – as opposed to Libyan or other foreign sources,” Conflict Armament Research said in a 2016 report on the Sahel.

Even if they are only committed by a minority of soldiers, such acts lead civilians to mistrust the armies supposed to protect them, and in some cases to join the armed groups to seek their protection instead.

“The fighters are found among the greater population, are part of them and live with them. It is not easy to identify them. That makes combat difficult, even if there are far fewer jihadist than soldiers,” explained Ibrahim Maîga, a researcher with the Institute for Security Studies.

“You can’t defeat these people without helping the population caught in the middle. One side accuses them of being terrorists, the other of collaborating with national or foreign armies. This is why it is imperative that the state gains more legitimacy,” he added.

The G5 joint force’s first operations are expected to take place in the Liptako-Gourma region, where the borders of Mali, Niger, and Burkina Faso meet. These states have been particularly affected by the attacks carried out by JNIM, Islamic State in the Greater Sahara, and Ansarul Islam against national and foreign security forces.

On 21 October, 13 gendarmes were killed when their barracks in Ayorou in Niger’s Tillaberi region came under attack.

The joint force will be deployed in an environment rife with trafficking of all kinds, and with globalised jihad, and where myriad local conflicts merge with and fuel each other.

On the border between Mali and Niger, economic rivalry between Tuareg and Fulani communities has deepened since becoming militarised and politicised.

Fulani youth – too simplistically – are seen as ready recruits to jihadist groups, and Nigerien Tuareg militia are being used by the government to hunt them.

In northern Burkina Faso, Ansarul Islam built its popularity by challenging social structures widely seen as inequitable, according to the ICG. 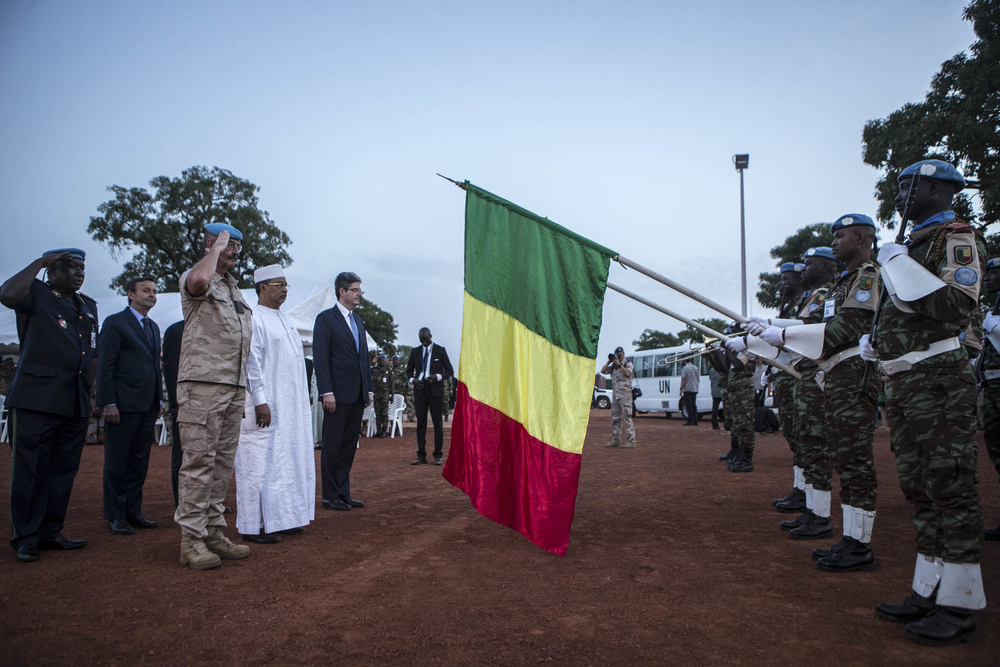 None of the groups operating in the region has claimed responsibility for the 2 October attack in which four US and four Nigerien soliders were killed 200 kilometres north of Niamey – an attack a top US general has attributed to a local IS-affiliated group. The incident served to bring international attention to US military presence in the region, described by some media as a “shadow war” at a time when the US is in the process of moving its drone operations from Niamey to the central Niger town of Agadez.

“Our American colleagues believe the [Niger] attack against their troops exposes a dilemma: Do too much and be exposed, or don’t do enough,” a French diplomat remarked.

It seems the Pentagon is going for the first option: US Defense Secretary James Mattis recently informed Congress that the United States was increasing its anti-terrorism activities in Africa and that new rules of engagement were being introduced, allowing troops to open fire on mere suspects.

But for the jihadist groups in the region, a greater US military footprint will feed their rhetoric of occupation and help swell their ranks.