It’s a Monday evening in Bamenda, the main city in troubled English-speaking Cameroon. The gates of the Vatican Express bus depot are shut, just like five other coach companies in town.

Any other day and there would be at least five long-distance buses ready to leave for the rest of the majority French-speaking country. But once a week there’s a near-complete shutdown of businesses and public services. Mondays are now “ghost town” days throughout Cameroon’s two anglophone regions: Northwest and Southwest. 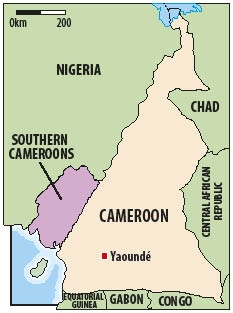 The boycott action has been called by a civil society coalition protesting English speakers’ “oppression, marginalisation, and deprivation”. They are demanding the return to a pre-1972 federal constitution, when the entire western part of the country was self-governing.

On this ghost town day, one bus company, Professional Drivers Express, is defying the ban. Fifty passengers are squeezed onto a single 30-seater, negotiating its way through the massive potholes outside the depot, heading to the capital, Yaoundé, an eight-hour drive away.

It is an uneventful trip until near the end. A few kilometres from the presidential palace, the seat of executive power, a middle-aged man stands up and begins to declaim.

“The struggle must continue,” he says. “If we stop now, we will be buried by La République. Francophones will dominate us even more.”

Before he sits down, he issues a final warning, which is greeted by silence from his fellow passengers: “But let us make sure we don’t end up dead or arrested!”

Breaking the boycott does not mean abandoning the cause. But it does demonstrate the contradictions triggered by this long-running crisis, in which six protesters have been shot dead, dozens injured, hundreds arrested, and two regions further impoverished.

Cameroon is a bilingual country; the constitution gives equal status to both English and French. But the English-speaking Northwest and Southwest regions are seething over their alleged marginalisation; accusing the government of giving preferential treatment to Cameroon’s eight other administrative regions.

The discontent, known in Yaoundé as the “anglophone problem”, is fanned by the perceived lack of investment by the government; a lack of political advancement for anglophones; and the general difficulty faced in the job market by those for whom French is not their first language.

Public unrest began in October 2016. It started as a strike by lawyers and then teachers over the “francophonisation” of the regions’ legal and education systems. It quickly coalesced into a general outcry over poor governance, “cultural genocide”, and the heavy-handed crackdown by the authorities.

Western Cameroon is 20 percent of the population but reportedly produces 60 percent of Cameroon’s GDP, and has little to show for it. It was under British colonial rule after World War I and was administered as part of neighbouring Nigeria until choosing to join French Cameroon in a 1961 referendum. 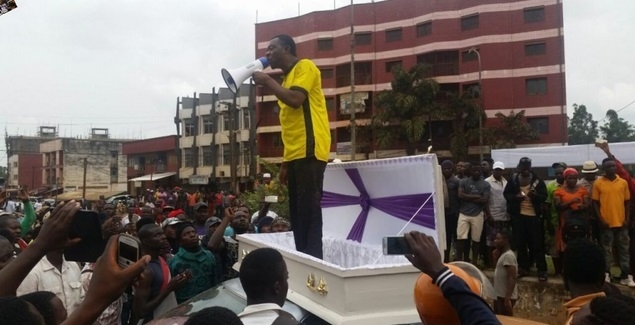 That union is now under intense pressure. The government argues that a return to a two-state federal system is a non-starter. It instead suggests that existing constitutional provisions for decentralisation should meet the self-governing demands of anglophones. But critics point out that these provisions have never been implemented, in a country ruled by a single party since independence.

For a crisis that ostensibly has language at its root, there has been little talking. Dialogue between the government and an umbrella opposition group, the Cameroon Anglophone Civil Society Consortium, collapsed way back in January when the authorities began rounding up protest leaders.

Internet access in the anglophone regions was also switched off, on the grounds that activists were using social media for "spreading false news". It was restored only in April after an international campaign #bringbackourinternet and economic losses estimated at $3 million by the NGO Access Now.

President Paul Biya, in power for 35 years, has described anglophone activists as “extremists”. He has used anti-terrorism legislation, which carries the death penalty, to charge some protesters. More than 25 people are currently facing trial at a Yaoundé military tribunal.

These include consortium leaders Felix Agbor, a human rights lawyer, Fontem Neba, a university lecturer, and activist Mancho Bibixy. The government has ignored calls by human rights groups for their release.

Two other leaders, Tassang Wilfred and Bobga Harmony, have fled to Nigeria and the United States respectively. They are now calling for the independence of “Southern Cameroons” (see map) – otherwise known as Ambazonia – a reflection of the growing secessionist sentiment among anglophone Cameroonians at home and abroad.

That radicalisation has extended to the ghost town protests. They are increasingly being enforced by intimidation. In March, more than 60 shops were burnt down in Bamenda’s food market by unidentified youths as punishment for breaking the boycott, according to a government official.

There have been similar arson attacks in Limbe and Mutengene, in Southwest region. Schools have been burnt down too, and only remain open now with police acting as guards.

Even the Church has been split by the protests.

Anglophone bishops who publicly sympathised with the protests have been charged after making statements that the government said could “compromise national unity”. The government adjourned those hearings when confronted by a threatened march on the courts in Bamenda and Buea, the main city in the Southwest region.

But the National Episcopal Conference, led by Archbishop Samuel Kleda – appointed as a mediator by Biya in February – has swung behind the government, condemning the protests and calling on children to return to school. On a tour of the western region, parents reportedly told Kleda they would only send their children back to classes when protest leaders were freed.

The consortium has said dialogue can be based "on one agenda only – the practical modalities for the putting in place of a two-state federation, and in the presence of representatives of the United Nations, and the UK".

Political scientist Mathias Owona Nguini argues that the “perspective of a francophone-anglophone federalism based on two federated states corresponding to the former respective territories of France and Great Britain is not negotiable”.

But given the deadlock and poisoned political atmosphere, external mediation may be the only way forward.

In careful comments last month, the UN’s special representative for the secretary-general in Central Africa, François Louncény Fall, encouraged the government to consider the release of detained anglophone leaders as a confidence-building measure.

In a statement he also called on the leaders of the protest movement to engage, "to find a consensual and lasting solution to the situation". To help achieve that, Fall said the UN was ready to "continue to accompany the two parties in their dialogue efforts".

As both sides struggle to find a common language of peace, grievances fester and a country is increasingly divided.