This article is part of our in-depth coverage. Read more like this...
LAMU/NAIROBI

Africa goes to the climate summit in Paris as the world’s smallest carbon emitter but the continent most vulnerable to climate change – and the one most in need of a fair deal that will unlock climate financing.

“Paris is a point of hope. This could be one of the most definitive agreements of our lifetime,” said Fatima Denton, director of the Addis Ababa-based Africa Climate Policy Centre.

“But we, as Africa, should go beyond hope, with very clear and precise blueprints to demand that industrialised nations work from a principle of self-enlightenment,” Denton told IRIN late last month, on the sidelines of a Climate Change and Development in Africa conference in Victoria Falls, Zimbabwe. “If [they support] developing countries, the potential dividends can be enjoyed by everyone.”

The Zimbabwe meeting brought together Africa’s lead negotiators, policymakers, researchers, the private sector and civil society to thrash out the continent’s position ahead of the Paris summit.

THE FIRST DEMAND is that a course is set to keep global warming at below 2 degrees – any higher will have disastrous consequences, particularly for Africa, where agriculture accounts for 75 percent of livelihoods. Support for carbon-smart development to harness clean technologies and reform to the Byzantine climate financing architecture are also key issues.

“Africa has leaders who are now committed to climate mitigation and adaptation and are mainstreaming the climate change agenda in their policies.”
— Achim Steiner, UNEP’s executive director

Seth Osafo, a Ghanaian lawyer and one of the Africa Group’s lead negotiators, told the meeting the continent must change tactics; to perceive themselves less as victims, and be both persuasive and canny to negotiate a fair deal in Paris.

“International climate change negotiations are complex processes, which have also exposed Africa’s limited negotiating capacities as compared to the other advanced regions,” Osafo said. A simple comparison is that African negotiating teams are tiny compared to industrialised countries – and the conferences are exhausting work.

The fault line at all climate summits is the principle of Common But Differentiated Responsibilities (CBDR). It is the idea that industrialised countries, as the main polluters, have special emission reduction obligations, and the responsibility to provide the finance and technology to enable the developing world to mitigate its greenhouse gases and adapt to global warming.

In practice, wealthy countries tend to want to dilute their obligations while non-industrialised nations hold to the concept that the ‘polluter pays’ as the only real card they have. 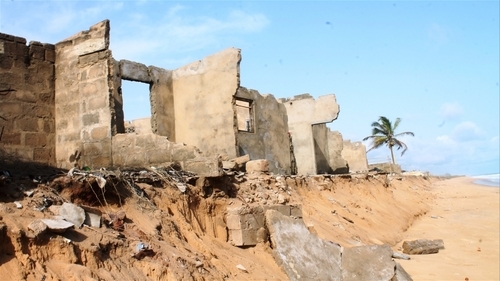 It calls instead for a forward-thinking approach at the Paris summit centred on country-specific action plans on climate respone called Intended Nationally Determined Contributions (INDCs). These could be used creatively to leverage “deeper international cooperation on financing, technology and capacity development,” the report says.

But it is not yet clear if any funding will be on the table in Paris to implement the INDCs. And while several African countries have shown ambition – such as Kenya with a proposal to cut emissions by 30 percent – other parts of the world have been a lot more conservative. Even if governments meet all their commitments in the INDC pledges, it still means climate warming of 3 degrees or more.

“The concern of civil society and progressive countries is that the current negotiations have focused only on setting up institutions and committees rather than on provision of finance, technology and capacity building that could assist developing countries face up to the challenges of climate change,” said Mithika Mwenda, coordinator of the continent-wide lobby group, the Pan African Climate Justice Alliance (PACJA).

By one estimate, there are 50 climate funds. But according to the APR, “sub-Saharan Africa has been poorly served by climate finance. Modest funding has been transferred through fragmented, overly bureaucratic delivery structures that combine high transaction costs with low impact. The overwhelming bulk of finance has been earmarked for small-scale projects rather than national programmes.”

Bilateral aid dominates climate financing to Africa, and not all of it is new money. Development assistance has stagnated over the last few years, and is likely to come under additional pressure as Europe responds to its migration crisis and increases its security spending.

According to the Nairobi-based UN Environment Programme (UNEP), the continent’s annual adaptation financing requirements – the money needed to help developing countries reduce their vulnerability to climate change – is around $11 billion through to 2020. But what is actually provided annually is just a fraction of what is needed, the APR noted.

BUT INCREASINGLY BOLD STEPS are being taken on the continent. “Africa has leaders who are now committed to climate mitigation and adaptation and are mainstreaming the climate change agenda in their policies,” said Achim Steiner, UNEP’s executive director. 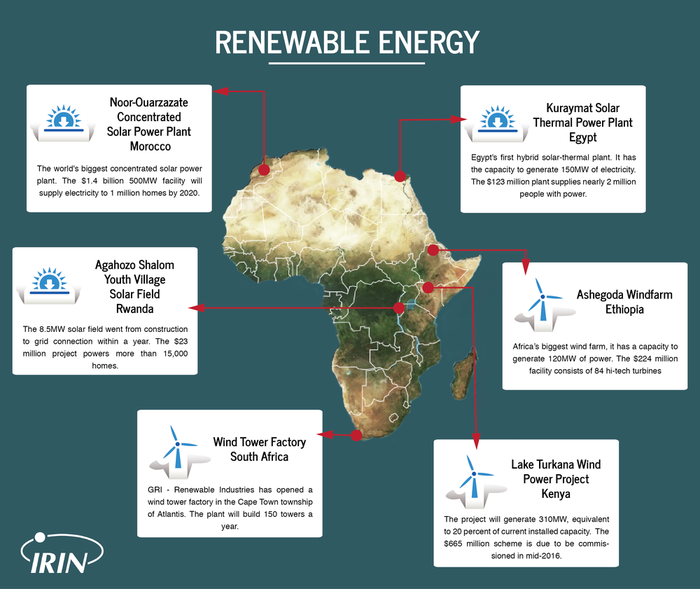 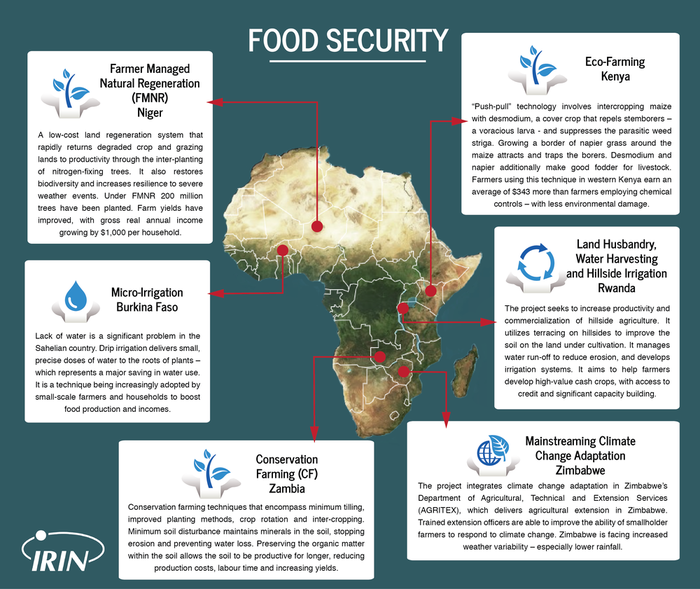 “It’s not just the money. That’s only part of the puzzle,” said Yao Graham, coordinator of the Accra-based research and advocacy group Third World Network-Africa. “It’s about the technology to adapt, to be able to address climate change with climate-resistance crops, better infrastructure. But technology transfer remains very contentious.” 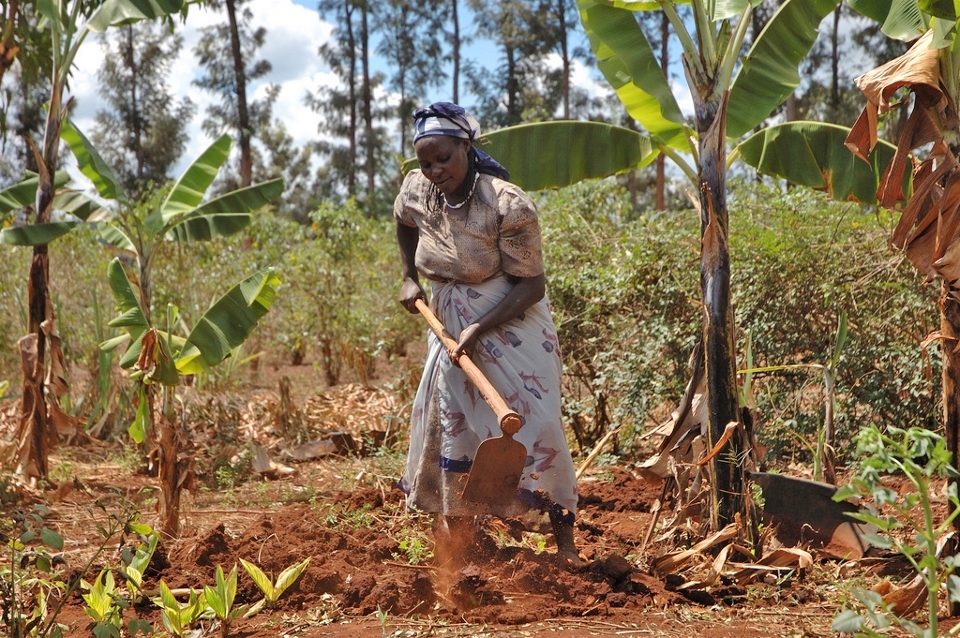 CIMMYT
Kenyan farmers are adapting to climate change in the district of Embu, as a farmer prepares her maize plot for planting

Africa has historically tried to maximise its weak hand at climate summits by developing a common negotiating position. “This has been a strength. Countries have tried to stick together,” explained Kwesi Obeng, a climate activist who has attended several of the key agenda-setting “inter-sessional” meetings at previous summits.

“We cannot win the fight by being in the blame game.”
— Denton, Africa Climate Policy Centre director

But that unity does not always hold to the end of the conference. A coal-burning country like South Africa, which sees its interests more closely aligned with the BRIC nations (Brazil, Russia, India and China) – and even Ethiopia, under US pressure at the 2009 Copenhagen summit – “towards the end have broken away and weakened the negotiators’ hands,” said Obeng.

The African Group is going to Paris already disappointed with the draft text. Its negotiators believe the principle of CBDR has been watered down, adaptation is not enough of a priority, and there is weak language on ‘loss and damage’ – a reference to the climate disasters such as cyclones and flooding associated with climate change.

As part of the Group of 77 developing countries, India and a formally linked China are at the moment supporting Africa. But Obeng points out that both industrialised giants “have interests beyond CBDR and loss and damage”, and anticipates that under pressure Africa will have to accept whatever deal it is given at the summit.

Denton, the director at the Africa Climate Policy Centre, believes post-Paris is also key: what’s needed is sincere development partners that can help leapfrog the continent into a climate-smart 21st century.

“We cannot continue with a narrative of victimhood,” she told IRIN at the Zimbabwe preparatory conference. “We cannot win the fight by being in the blame game. We cannot stay on a narrative that hems us into a problem. We need to turn our vulnerabilities into strengths.”