Read about what we achieved.
PRESEVO/OXFORD

Rough seas and colder weather usually signal a sharp drop in the numbers of migrants and refugees attempting to cross the Mediterranean to reach Europe. But after a summer of unprecedented refugee arrivals, this winter is likely to be different.

Autumn has already made sea crossings more dangerous, but there is no sign of a downward trend in arrivals. In fact, the number of people making the short sea journey between Turkey and Greece has actually increased to 7,000 a day from around 4,500 a day at the end of September, according to the International Organization for Migration.

Arrivals to Italy via the much longer sea route from Libya are expected to drop over the winter, said IOM spokeswoman Florence Kim, but “no drop is expected” in arrivals to Greece, the route now used by the vast majority of Syrian refugees.

“Winter is going to hit camps in Lebanon or Turkey where the living conditions are already hard. This is going to push people to leave,” Kim told IRIN. Recent Russian airstrikes in Syria are also likely to trigger a renewed exodus of refugees, she said.

Last week, European Council President Donald Tusk cited estimates from Turkish officials that Russia’s involvement in the conflict could displace an additional three million Syrians from Aleppo and surrounding areas. IOM described his comments as “speculative”, but Brussels is nevertheless negotiating an action plan with Turkey aimed at boosting aid to Syrian refugees there, and discouraging them from moving on to Europe.

The UN refugee agency, UNHCR, declined to comment on the likely impact of Russian airstrikes on the refugee crisis but said it was planning for up to 700,000 asylum seekers reaching Europe in 2015. Nearly 600,000 people have already arrived by sea this year, 83 percent from refugee-producing countries, according to UNHCR figures.

“While it is difficult to estimate at this point, it is possible that there could be even greater numbers of arrivals in 2016,” said William Spindler, a spokesman with UNHCR in Geneva.

Refugees and migrants still travelling the route from Greece through Macedonia, Serbia, and Croatia over the coming months will face significantly tougher conditions as they make at least part of their journeys on foot, some pushing the disabled and infirm in wheelbarrows, others carrying small children.

Temperatures in the western Balkans are already dropping to just above freezing at night. During the dark winter days of December and January, temperatures will sink further, averaging between minus three and minus five degrees Celsius, while Arctic winds and snow can send temperatures plummeting to minus 20.

Melita Sunjic, UNHCR’s deputy representative in Serbia, said projections always include worst-case scenarios and that the agency is planning for increasing numbers of beneficiaries transiting through the region during the winter.

“For months we have been prepositioning blankets and plastic sheeting (for makeshift shelters) in Serbia as well as raincoats, ready to be distributed when and where needed, “ she told IRIN. “Now it is warmer clothes for adults and children of all ages that are most needed.”

Refugees stand in the rain waiting to register in the town of Presevo in Serbia, after having crosse 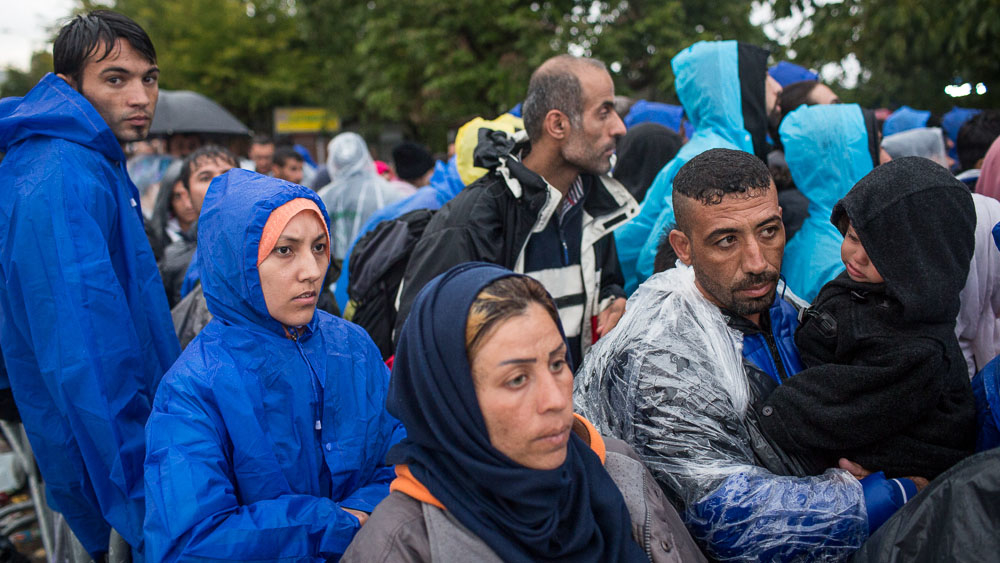 “Preventing further loss of life is an absolute priority,” said Linda Low, a spokeswoman for the International Federation of Red Cross and Red Crescent Societies, which is preparing for winter with contingency stocks of warm blankets.

Many of the hastily established reception camps and transit centres along the Balkan route still consist of little more than tents, while large numbers of migrants in Serbia, Croatia, and Hungary are still sleeping in the open with no protection from the elements.

The Serbian government has just 800 places in permanent structures more suitable for winter conditions. It is preparing more, but refugees have tended to avoid such centres as they are not on the main routes and they want to reach destinations in northern Europe as quickly as possible.

In Austria and Germany, many people are still staying in tents. The capacity of the more durable accommodation options in these countries has been overwhelmed by the vast number of summer arrivals.

“People staying in tents (in Austria and Germany) are gradually being moved into buildings and shelters that can be heated, but this may take some time,” said Spindler of UNHCR.

An IOM official at Miratovac on the Serbia-Macedonia border, who did not want to be named, predicted that many migrants and refugees will remain in Greece and Turkey for the winter before moving north come the spring.