Readying a fundraiser for an Aleppo hospital, a London boutique owner expressed her concern about the Syrian refugees who’ve fled to neighbouring countries: “They’re living in camps over there, aren’t they?”

Not quite. Just ask Ismail Yousif, a 51-year-old native of Hasaka, in northeastern Syria. After fleeing to the semi-autonomous Kurdistan region of Iraq in 2013, he and his family sought shelter in a refugee camp. But there wasn’t space, and sewage now seeps across the floor of his cheap rented quarters.

“Nobody cares whether we starve or die,” he told IRIN.

The image of Syrian refugees in dusty refugee camps is a favourite cliché of politicians and media alike. “[N]early four million Syrians languish in camps in Turkey, Lebanon and Jordan,” an article in The Independent lamented. Politicians too refer to refugees “languishing” “in the camps,” and donors boast about their contribution to running them, even in places where they don't exist.

The reality for the vast majority of Syrian refugees is closer to Yousif’s. According to the UN’s refugee agency, UNHCR, of the four million Syrians who’ve fled their country’s four-year war, well over 3.5 million people are in the cities, towns and villages of Turkey, Lebanon, Jordan and Iraq. The Syrian refugee crisis affects those host communities too.

‘Not that different from life in the camps’

Until recently, the majority of Syrian refugees in Kurdistan lived in urban areas and paid rent. Almost all the humanitarian assistance, however, is focused on the camps.

There was particular pressure on the low-end housing sector, which was struggling to deal with Iraq’s own IS-triggered internal displacement crisis without having to make room too for refugees from abroad.

Unable to afford housing on their own, many Syrians in Iraq have been pushed from rent to tent. In 2013, there were an estimated 38,500 Syrians living in three camps – one in Kurdistan and two in central Iraq. Now there are some 94,000 in 10 camps. Of all the countries in the region with a significant population of Syrian refugees, Iraq now has the largest proportion living in camps, although that’s still only 38 percent.

When Yousif, his wife Habiba and their three teenage sons first arrived in Kurdistan in February 2013, their first step was to rent a home. A builder by trade, chronic back problems meant Yousif couldn't work, so his sons cut their education short and entered Erbil’s construction industry. When the financial crisis hit at the beginning of 2015, the shopping mall they were helping to build was mothballed and their income disappeared overnight.

Even their smallest revenue source dried up. “My 14-year-old son worked in a car wash for a very tiny wage because he was under the legal age,” Yousif told IRIN. For a 12-hour day, he earned about $7. “He lost his job because the car wash closed, too.”

The family relocated to a nearby refugee camp in April 2015, but it was so overcrowded that after a few weeks of miserable conditions they gave up. Yousif was told no other camp could take them in. They were left with no choice but to find somewhere to rent yet again, even though they couldn’t afford it.

Their current rental property has broken doors and windows. “The bathrooms are very old and the sewage system is not working properly,” said Yousif.

Desperate for shelter, refugees like Yousif often overpay for decrepit buildings. “They’re paying much more than they should be charged for the quality of their homes,” Amelia Rule, a shelter adviser with CARE International, told IRIN. Many end up in overcrowded and unsanitary apartment blocks, garages, or construction sites, with eviction a constant concern.

“I rented this place because it was the cheapest. I am just worried about winter, because it will be very cold,” explained Yousif. Winter temperatures in Kurdistan dip below zero degrees Celsius. “We have electricity five hours a day and the fuel for heating is expensive ($1 per litre). So it’s not that different from life in the camps.”

The obvious distinction is that a camp is free; the rental costs them $400 per month.

In Kurdistan, UNHCR reports that there is “no fund available to support non-camp refugee families.” Syrian refugees in Lebanon, Jordan and Turkey have also seen their rental subsidies drop or disappear, in part because of underfunding. The UN said it needed $4.5 billion to support Syrian refugees in 2015 – it has received only $2.2 billion.

The failure to help refugees like Yousif remain in rented homes is a false economy, some experts argue. “The reason support within communities is so cheap is that we do not need to create and maintain communal services, such as schools and clinics,” explained Tom Corsellis, executive director of Shelter Centre, which provides expertise and help to humanitarian organisations tackling settlement and reconstruction. In camps, humanitarian organisations have to provide all these expensive services.

But, Corsellis added, humanitarian support is lacking to boost some of the communal services that refugees and host communities share, like plumbing and electricity infrastructure. 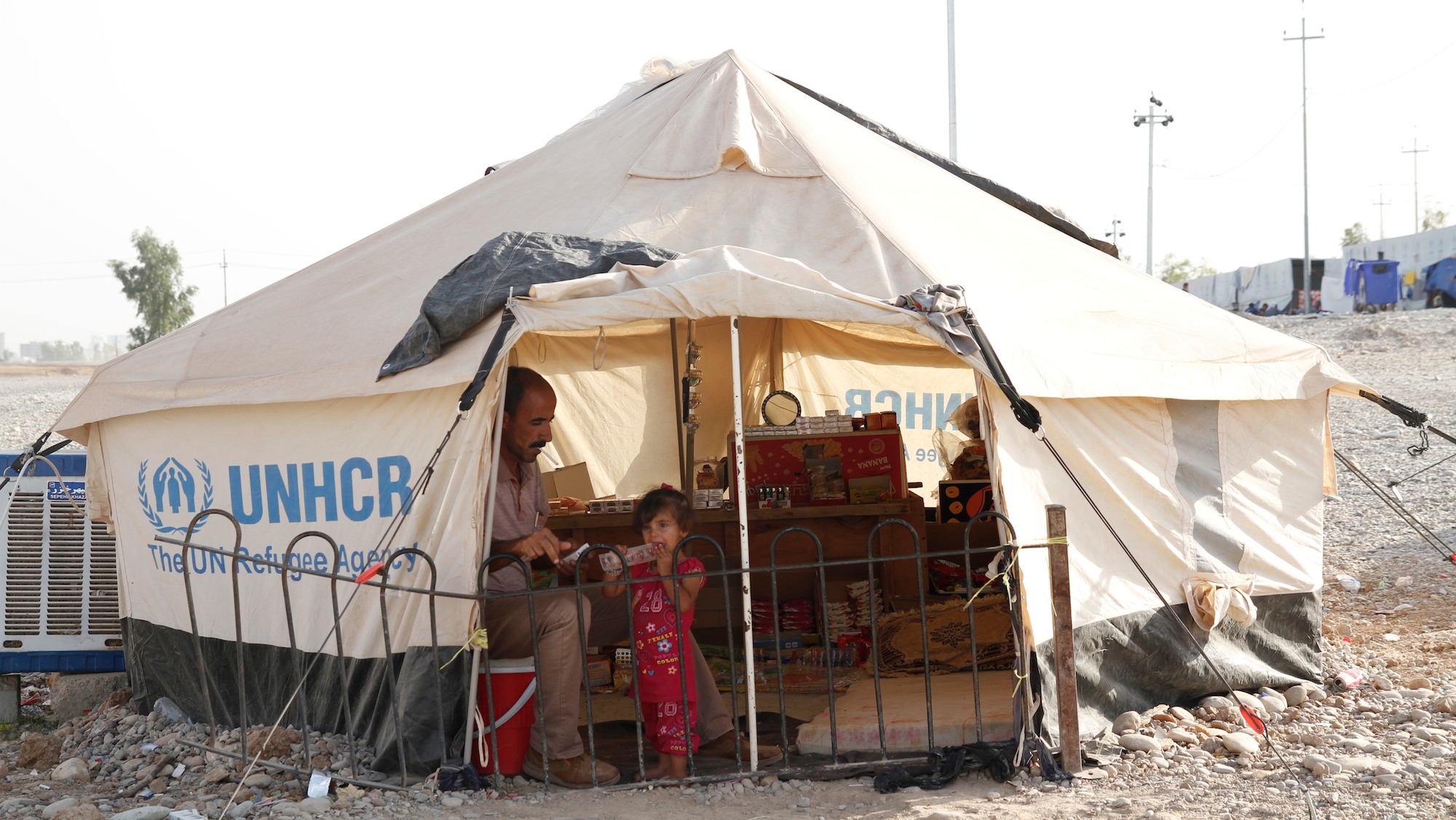 In Lebanon, the government has not authorised a single formal refugee camp for Syrians – their history with Palestinian refugees makes this a fraught political issue – and 85 percent of refugees there live in rented accommodation and unfinished buildings.

Their contribution to the Lebanese economy in rent alone is an estimated $36 million per month. But according to a report by CARE International, the “strain on Lebanese infrastructure and services is having a destabilising effect.”

In the Lebanese city of Tripoli, aid actually aggravated tensions between poor Lebanese residents and Syrians. “Syrian refugees who received cash for rent at relatively high rates were the most highly desired tenants,” said the report, “with landlords often selecting these families over potential Lebanese tenants.”

“The challenge is that a lot of funding is directed towards Syrian refugees only, making it difficult to programme for a whole neighbourhood that is affected,” said CARE’s Rule.

With cash grants to refugees unsustainable, agencies like CARE and the Norwegian Refugee Council are prioritising urban improvement. Updating plumbing, fixing windows and doors, and renovating run-down streets can persuade landlords to offer free or reduced cost accommodation to refugees. Crucially, this investment in infrastructure benefits Lebanese communities too.

Rule acknowledges that this tactic might raise some eyebrows. “We’re bridging into the development realm, so there is a need for more flexibility in the funding.” But if European donors want to see the refugee crisis contained in the Middle East, they may have to look outside camps and invest in the infrastructure of host countries.

Today, cuts to aid are even pushing people back towards the war in Syria.

“We’ve seen a major increase in the number of Syrian refugees returning to Syria,” Cate Osborn, a protection and advocacy adviser with the Norwegian Refugee Council in Jordan, told IRIN. It hit a peak of 340 daily returnees in September; almost 4,000 Syrian refugees in Jordan headed back during August.

“Those people are telling NRC staff that the inability to meet basic needs are significant [factors],” explained Osborn, citing cuts from the World Food Programme in particular: 229,000 urban refugees lost their food aid in September, leaving less money for rent. “They see that there are no longer any sustainable options to stay in Jordan,” Osborn added.

This phenomenon extends outside Jordan. A reported 94,000 Syrian refugees left Turkey for Syria in the past year. Some return to sell assets and property, raising cash for a journey to Europe. Yousif’s house in Hasaka was once valued at $40,000. But last month he sold it for only $6,000, just enough to smuggle his eldest son into Germany.

Yousif has no plans to return to Syria, calling it a battlefield in the “third world war.” Having considered his options, poor plumbing might be as goods as it gets.