Thousands of people have been returning to their homes in the Central African Republic more than a year after fleeing a violent and complex political crisis, in many cases to neighbouring countries.

While security may have improved in some areas, resuming any semblance of a normal life is proving a major challenge for many returnees.

Since May, the transitional government has closed dozens of camps for displaced civilians in the capital Bangui. With support from the International Organization for Migration, the government, which is unable to offer basic services to most of the population, has been providing kits to help those returning home get started. These kits consist of two sacks of rice, five litres of oil, and the equivalent of $150.

At the height of the crisis that followed a March 2013 rebel coup, some 900,000 Central Africans were internally displaced, with 60,000 seeking sanctuary around the capital’s international airport. OCHA, the UN’s aid coordination body, says almost 400,000 people remain displaced across the country, including around 33,000 in Bangui.

Many of those who have left various camps have returned to Bangui’s 5th district.

“We have nothing to do. We’d like to do some trading but there’s no money,” said Denise, one of a trio of elderly widows IRIN met near the district’s police station. A few weeks previously, they had returned home after spending a year and a half at the airport.

According to a report released this week by the International Rescue Committee (IRC), more than 80 percent of CAR’s population lack the money to meet their basic needs. Some 2.7 million people, about half the population, are in need of humanitarian aid. Donors have given less than a third of the $613 million sought to address their needs this year.

Cash flow is far from the only problem facing returnees.

“We can’t use water from the wells to drink or for household chores because many of the wells have been contaminated by the bodies that were thrown in them,” said Jeanne, another of the widows.

Instead, they draw water from the empty ruins of the homes and shops of their Muslim former neighbours. Because the rebel coalition that seized power in Bangui in 2013 came from the predominantly Muslim northeast of the country, Muslims in general, often civilians with no connection with the rebels, were violently targeted by militia groups, especially in the capital. Non-Muslims were also attacked during months of inter-communal violence.

Lack of clean water is a major concern in the Central African Republic. 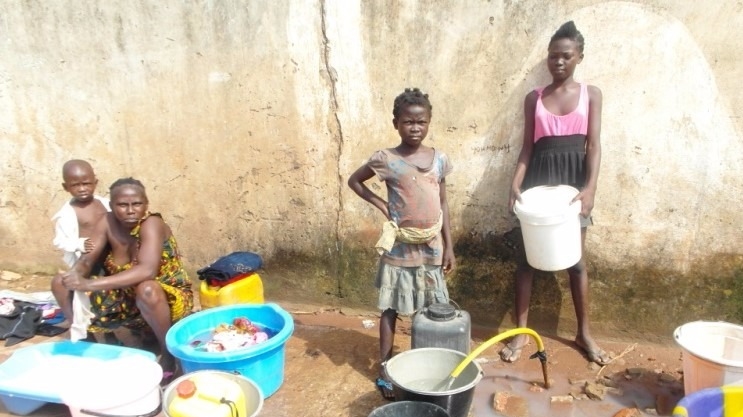 The Central Africans who IRIN met said such tensions have to a certain extent dissipated, if only in the capital. People moved freely in and out of Muslim districts in Bangui that until recently had been isolated communities in hostile neighbourhoods.

But according to the IRC report, some 36,000 people across the country are still trapped in such enclaves, “with limited access to basic services and at risk of violence and abuse.”

Less help for those abroad

Returning refugees are not eligible for the government’s aid packages and there are no other official procedures to help those who do come back from abroad. There are currently some 464,000 CAR citizens living in neighbouring countries.

Bank worker Mahamadou Habibou, 51, recently returned with his family from Cameroon. He has been able to resume his job and put his children back in school. He now feels safe commuting to work and going to the mosque.

“I decided to come home because I couldn’t put up with being in exile anymore and peace is returning to my country. I am free to move around,” he told IRIN.

We must take stock of what happened. We must forgive each other to live together again and rebuild our country.

Still, Habibou is staying with relatives and needs to find a new home. His old one was destroyed shortly before he fled for Cameroon.

“The government must think about bringing our compatriots in exile back home because they are suffering. It is not nice being in exile,” he said.

For Mahamat Moctar, a 32-year-old Muslim trader who spent 15 months living as a refugee in neighbouring Democratic Republic of Congo, it is time to turn the page on this chapter of violence in CAR.

“Our parents and grand-parents lived in peace with the Christians but we have managed to kill each other – something we’ve never seen.

“Now we must say ‘never again.’ We must take stock of what happened. We must forgive each other to live together again and rebuild our country,” he said, calling on the government and international NGOs to support people like him get their businesses going again.

Sixty-five-year-old barber Alhaji Ibrahim still has his scissors and salon and so has managed more easily than most to make ends meet since returning with his family from Chad.

“The past three months have been okay. I’m working like before. There aren’t so many customers, but we are getting by from what I earn,” he said.

One danger that puts more people off returning is the presence of unexploded grenades, shells and bombs – known as explosive remnants of war (ERWs).

“An accidental explosion, a grenade thrown at people, or children playing with munitions found among debris are frequent scenes in some districts of Bangui,” the Agency for Technical Cooperation and Development (ACTED), an international NGO, said in a recent briefing.

The general public and aid workers face a “daily risk from grenades and [other] ERWs because they are often found among the debris of destroyed houses set for reconstruction, tall grass being cut and gutters being cleared,” ACTED said.