Galina Vodzinskaya, 60, has been walking for five kilometers in 27 degrees Celsius weather in eastern Ukraine but is nowhere near done her journey.

She used to travel by bus for this monthly trip from her home in rebel-held Horlivka to the government-controlled town of Artemivsk for supplies, including the bag of meat she is carrying, but public transport is now suspended.

Instead, she has up to five travel legs, from taxis to private cars – whatever she can get – then walks part of the way through a government checkpoint, where she lines up amid dozens – if not hundreds – of queued cars and piles of garbage strewn along the road. Some people wait 10 hours or more at checkpoints in the summer heat without access to water or washroom facilities.

“Three days ago… there was a crazy queue, just crazy,” she says. “Why is it so difficult?”

The situation is so bad that the International Committee of the Red Cross is planning to provide water and other services for civilians waiting in the long lines at checkpoints.

Tank tracks are imprinted on the road, a reminder of a conflict that has killed 6,500 people since it broke out in April 2014 when pro-Russian rebels took over parts of eastern Ukraine following Moscow’s annexation of the southern peninsula of Crimea.

In mid-June, Ukrainian security services issued an order prohibiting public transportation into and out of rebel-held territory, which has complicated travel for people crossing the frontline in search of supplies and services that are much more expensive, or altogether non-existent, on the rebel side (See IRIN’s longread on conditions in the rebel-held areas).

In what critics call yet another move in a blockade on rebel-held regions, the government also blocked commercial cargo from entering rebel-held Ukraine at any of the six official road checkpoints. This has slowed the delivery of basic goods – including food – for the last three weeks.

Map of Ukraine showing the frontline between the rebel-held east and the rest of the country, as of April 2015. 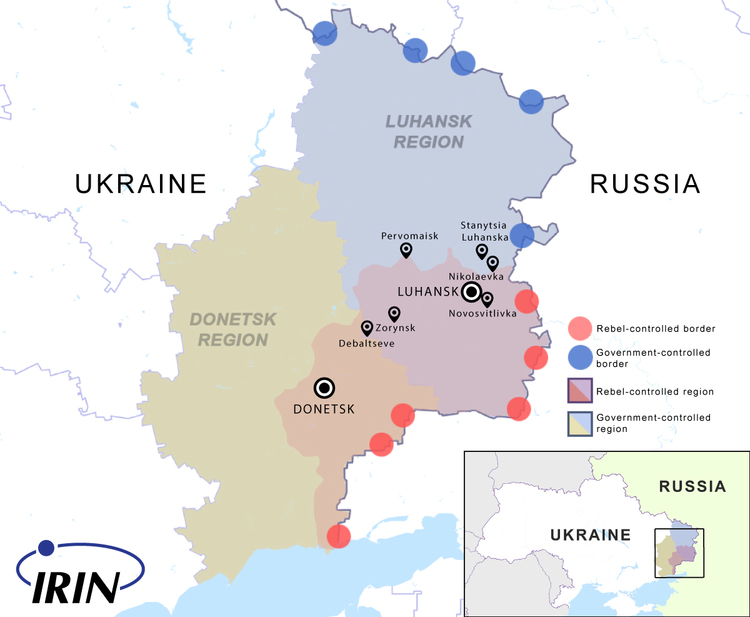 The government says it is trying to prevent “terrorists and their accomplices” from leaving the conflict zone and to protect civilians. In January, 13 people in a passenger bus were killed when a government checkpoint came under attack.

These two orders follow a previous order in January, which required people entering or leaving rebel-held areas to apply for a special permit, a system that has limited people’s ability to access humanitarian aid and leave the conflict zone, according to the Organization for Security and Co-operation in Europe (OSCE).

Last month, a popular crossing point near the town of Maryinka was closed after a battle there that saw some of the fiercest fighting since February, when a ceasefire agreement was reached (violence has continued since).

That closure has added to the congestion at remaining checkpoints - with hundreds of cars lining up on a daily basis as early as at 4am. On one side of the Horlivka government checkpoint, the driver of a white van and a Ukrainian guard yell at each other over paperwork as frustration boils over.

Without buses, many people have to use taxis, which are not only expensive but add yet more traffic to the checkpoints. Since many drivers do not have the special permits required, some riders have to get out of the taxi, walk across the checkpoint, and hire another taxi on the other side.

“Civilians have to go often long distances with a lot of luggage [they themselves are] carrying physically across the contact line because of these restrictions in place,” the deputy chief of the Special Monitoring Mission of the OSCE, Alexander Hug, told IRIN.

At the checkpoint, Aram Gugasyan stands by the side of the road with food and supplies, his thumb pointed up in search of a ride.

He normally takes his car when he makes the trip between government-held Kramatorsk where he works and rebel-held Donetsk where his wife lives with their young children. But queuing at the checkpoint in his car took too long. Now he hails taxis or other cars passing by.

“[The trip] has become worse and worse… it’s much more expensive now.” The car he is trying to flag down will be the third vehicle he uses on this trip. The ride, which normally takes an hour and a half one-way, now takes about four hours – more if he’s unlucky.

Monitors have seen up to 800 cars lined up at government checkpoints; and at one checkpoint, they noted that 20 percent of civilians attempted to cross without a valid permit and were refused passage.

Cars line up at the government checkpoint near Artemivsk town in eastern Ukraine. New government orders have made it harder for people and goods to cross from rebel-held to government-held areas. 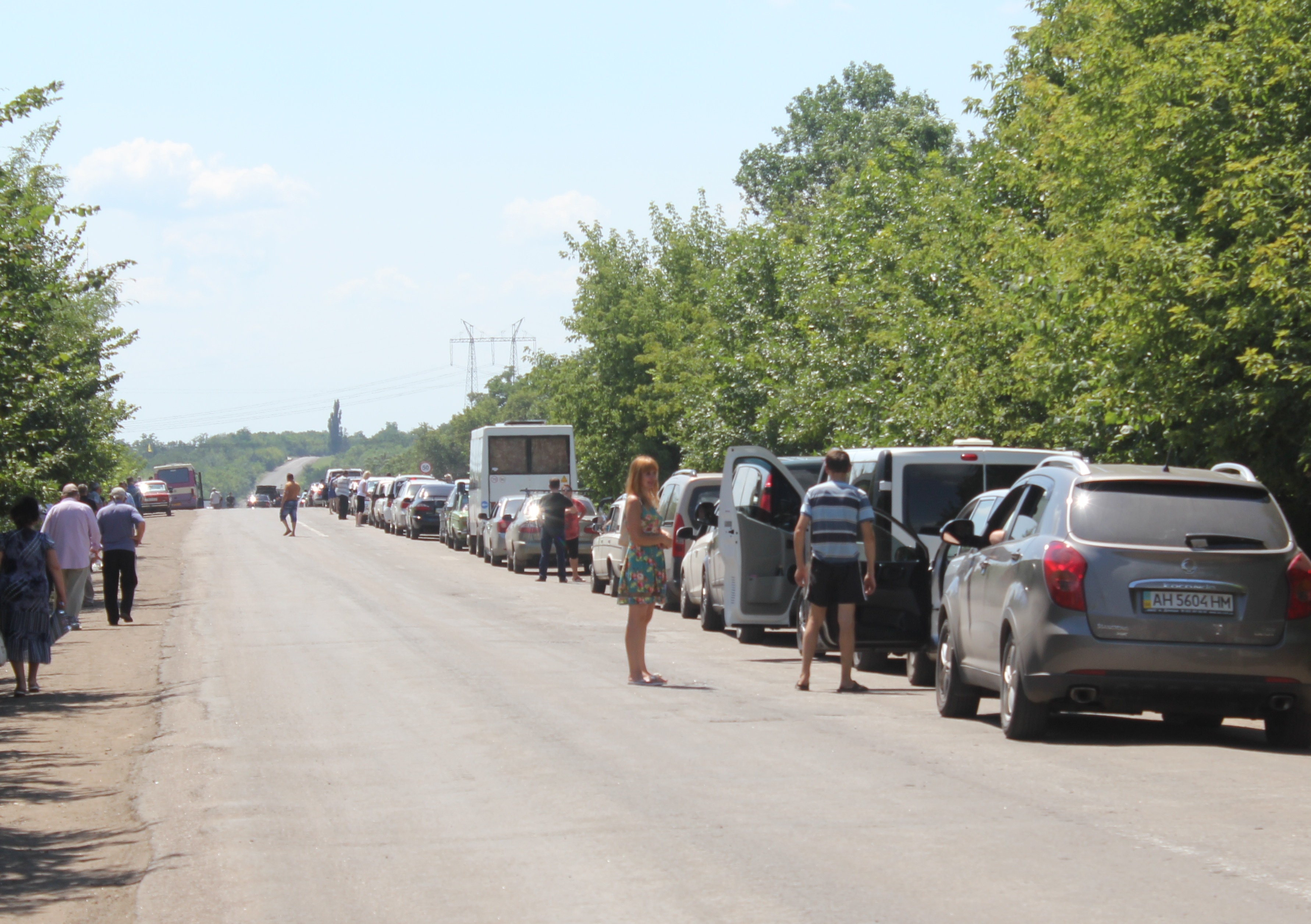 There are some exceptions to the new rules: joint transportation can be used to take internally displaced people fleeing the conflict across the frontline; humanitarian agencies can bring supplies in; and amid both confusion about rules and alleged bribery, commercial cargo is at times let in on an ad-hoc basis.

“[Authorities] decide what the destination and purpose of the cargo is. If documents are indeed not false and [are] legal, the cargo is let through. Otherwise, it’s stopped and seized,” Ukrainian military spokesman Andriy Lysenko told IRIN.

But the orders have complicated aid delivery, Only one checkpoint can now accommodate humanitarian trucks; and it has some of the longest line-ups and is sometimes closed.

The UN’s World Food Programme (WFP), which was not able to bring in any aid for two weeks in early June due to an increase in fighting and the related closure in the Maryinka checkpoint, is now facing additional delays in distributions.

“We’ve already been affected because we are not able to move in the amount of food we would like to put in and this will [increase] if the situation remains,” said Giancarlo Stopponi, head of WFP’s office in Ukraine.

WFP is facing higher needs as an increasing number of internally displaced people return to their homes in rebel-held areas, where many can no longer afford the higher food prices. This month, the agency plans to assess food security, including the availability of food at markets.

The ban on the travel of commercial goods is likely to increase pressure on aid agencies to deliver food, which is already running low.

“There is two times less meat than there used to be and three times less [dairy] products,” Babenko Yevgeniya, a manager with the Amstor chain of supermarkets, which has 14 locations in rebel-held Donetsk region, told IRIN.

Now, she stocks her shelves with whatever products she has: Boxes of tea fill one side of an aisle; water bottles fill the shelves that cheese used to occupy; bags of chips and beach toys lay where packets of meat once were.

If documents are indeed not false and are legal, the cargo is let through. Otherwise, it's stopped and seized.
Yevgeniya says she also faces major problems trying to import non-food products like school supplies for students.

Prices have already doubled in rebel-held regions but the new orders will further limit supplies and push prices even higher.

The rebel-held region had already been isolated by the withdrawal of state services including the funding of hospitals and schools, forcing citizens to pick up pensions and benefits in government-controlled towns.

Still, there are some promising signs. Last month, the Prime Minister of Ukraine Arseniy Yatsenyuk met with aid agencies regarding the humanitarian situation in the east and promised a "green corridor" and to simplify procedures for allowing aid to get through.

But the restrictions on civilians and cargo already in place are increasingly angering locals who have been caught in a conflict which, according to the UN, has seen indiscriminate shelling in residential areas on both sides of the frontline.

Back at the government checkpoint, Vodzinskaya complains that despite decades working at a telecommunications company, she now has to make these long journeys just to get her pension.

Her voice shakes and her lips quiver as she talks about not wanting to leave her home. But for now, her first concern is how to get there, unsure if she will be able to grab a bus or hail a taxi once she passes the checkpoint.

“Ukraine is against us,” she says. “I was working 40 years for Ukraine and now they don’t need me.”