A UN watchdog has blasted the Iraqi authorities for their failure to adequately support and protect the nearly three million people displaced within its borders by the so-called Islamic State, citing examples of restricted movement, detention without due process and an "ad hoc" approach to aid delivery.

In a statement published on Tuesday, at the conclusion of a week-long visit to Iraq, Chaloka Beyani, the UN’s Special Rapporteur on the human rights of internally displaced persons (IDPs), said a number of international laws and standards were being violated and he called on the government to “intensify its efforts and devote greater resources, planning and attention” to meeting the needs of the displaced.

“Access to safety for IDPs is a fundamental right and a paramount concern that must be addressed urgently to avoid further deaths and violence,” Beyani said.

“I received disturbing reports of IDPs being barred entry to some safe locations on the basis of their identity or place of origin, which potentially places them at significant risk,” he added. “In numerous locations IDPs have faced restrictions on their freedom of movement that contravene international standards.”

While a number of local and international aid agencies are involved in the response effort, according to the The Guiding Principles on Internal Displacement, the primary duty and responsibility for providing humanitarian assistance to internally displaced persons lies with national authorities.

A common reason given for restricted movement of IDPs within Iraq is a fear of militants penetrating checkpoints and setting up sleeper cells.

Acknowledging these “legitimate security concerns” Beyani stated: “The overwhelming majority of IDPs are innocent victims of conflict and they must be respected and treated on a humanitarian basis.”

And he stressed: “It is imperative that humanitarian assistance is provided on an equal basis to all in need, irrespective of their identity, location or place of origin, in accordance with the humanitarian principles and practice.”

Beyani’s comments come as tens of thousands of Iraqis are in flight from the city of Ramadi, which fell into IS control at the weekend.

On Tuesday, the Norwegian Refugee Council (NRC) reported that had distributed aid parcels to more than 1,000 families – approximately 6,000 people – being held at a checkpoint south of Baghdad.

And large numbers have also been blocked at Bzebez bridge, linking Anbar and Baghdad provinces, according to our reporter, echoing scenes during the last outflow from Ramadi back in April.

Reports of people being held back at checkpoints and refused passage into certain provinces across the country have been common since January last year, when IS first entered Anbar. 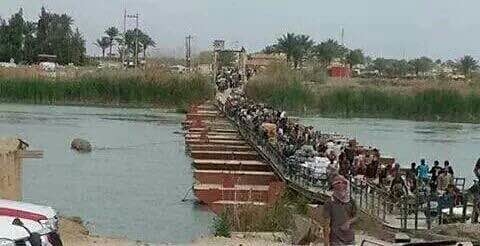 However, with the recent surge in IDP movement, due to Iraqi security forces’ offensives on IS-held territory, the issue is now reaching a critical level; there are regular reports of barred entry into in areas controlled both by the Government of Iraq in Baghdad, and that under the semi-autonomy of the Kurdish Regional Government (KRG) in Erbil.

OCHA, the UN’s aid coordination body, often lists in its crisis updates checkpoints closed to IDPs, most recently in the south of Sulaymaniyah, and in the province Kirkuk, a major thoroughfare for families fleeing fighting in IS-held Salah al-Din, Ninewa and Anbar.

While some bottlenecks have been reduced due to UN intervention at local and government levels, those passing checkpoints are increasingly being asked to prove someone on the other side is sponsoring them.

Beyani described this approach as “deeply concerning” because he said many IDPs would not be able to comply, and moreover many no longer had access to their documentation due to the circumstances in which they had fled.

“Any restrictions on movement must be temporary and justified, specified in law and non-discriminatory, and in situations of risk all barriers to access to safe location for IDPs must be immediately lifted,” he said.

Paperwork – or lack of - is a major hurdle in IDPs struggling to gain both safe passage and aid support, according to Grainne O’Hara, the deputy representative for the UNHCR, the UN’s refugee agency in Iraq, which leads on "protection" issues for IDPs.

“Iraq has very complex layers of registration and many different types of civil documentation based around the notion of governorate of origin or residence,” she said.

She explained that this paperwork – linked to benefits such as the Public Distribution System (PDS) for food - needed to be processed if someone was moving with a view to settling, as opposed to visiting for business or leisure, although she acknowledged IDPs in flight were not necessarily making long-term re-settlement decisions.

Capacity was also an issue, O’Hara said. “Some governorates are arguing simply that they do not have the resources to take in any more IDPs.”

On May 5 Babylon Provincial Council announced no more IDPs would be allowed to enter its governorate “due to a lack of resources to host them”. Several other governorates have also sealed some their entry points over recent months.

Although everyone accepts the security concerns and that the country is over-stretched, there is growing disquiet among aid workers about how sponsorship requirements and other entry restrictions are being applied along sectarian and ethnic lines.

In the south, this is limiting the movement of Sunni IDPs into mostly Shia provinces – such as families from Anbar trying to access places like Baghdad, Karbala and Basra. Meanwhile, the Kurdish authorities are being more stringent with Arab IDPs than they are Yazidis, Christians and those with Kurdish ethnicity.

“Iraqi citizens within their own country should be able to go where they want, rent a house, buy a house, get a job etc, but the reality is that these rights can be blocked in many, many ways, through intimidation or other means,” explained a protection specialist at an international NGO, who did not wish to be named due to “government sensitivities”.

“From a protection perspective, it’s against humanitarian principles and it’s something that shouldn’t be happening because it’s the denial of access to services and assistance that people need,” he added.

Fabio Forgione, head of mission for Médecins Sans Frontières (MSF) in Iraq, told IRIN: “An inability to move due to sectarian tensions is widespread, especially around Baghdad and Salah al-Din and this is affecting people’s ability to access services and support.”

Some of the lack of movement was, he said, more due to fear and perception, than formal barriers. But he added: “We are having to duplicate a lot of our services and do more outreach to ensure we can reach all the IDPs, even within one city or district.

“This is having an impact on us budget-wise because we have to spend more resources than we would do normally duplicating and moving services.”

They treated us like we were strangers and criminals

Concerned about the violations of IDP rights, last month the Masarat Foundation, a Baghdad-based organisation that lobbies for minorities, launched a campaign for the parliament to enact a new law to give more protection for displaced peoples.

Masarat Chairman, Saad Salloum, told IRIN that while IDPs had “constitutional and international rights” these were not being upheld in Iraq and further legislation was necessary.

“The policies of discrimination against displaced people is jeopardizing their lives,” he said, referring to minorities in particular, who were struggling to get jobs.

Since the start of the exodus from Anbar in January last year, Sunni IDPs have felt threatened in the largely-Shia Baghdad. In recent weeks, following the new arrivals from Ramadi, there has been an uptick in violent incidents.

Twenty-seven-year-old Bilal Al-Fahdawi, a Sunni, who fled to the capital from Ramadi in April, has since left the city because of a death threat against his uncle, painted on wall near to where they were staying.

“The security forces harassed us and treated us like we were strangers and criminals. There is a big campaign against,” the father-of-one said.

“A lot of people would rather go back home to Anbar and live under IS, rather than be threatened here by militias,” he added, referring to Shia Muslim groups who have been fighting alongside the formal government armed forces.

“My uncle is displaced from Anbar too and moved to a mixed neighbourhood where militias are in control, but one day the militias painted on his house's wall ‘leave the area or you will be dead soon’”. 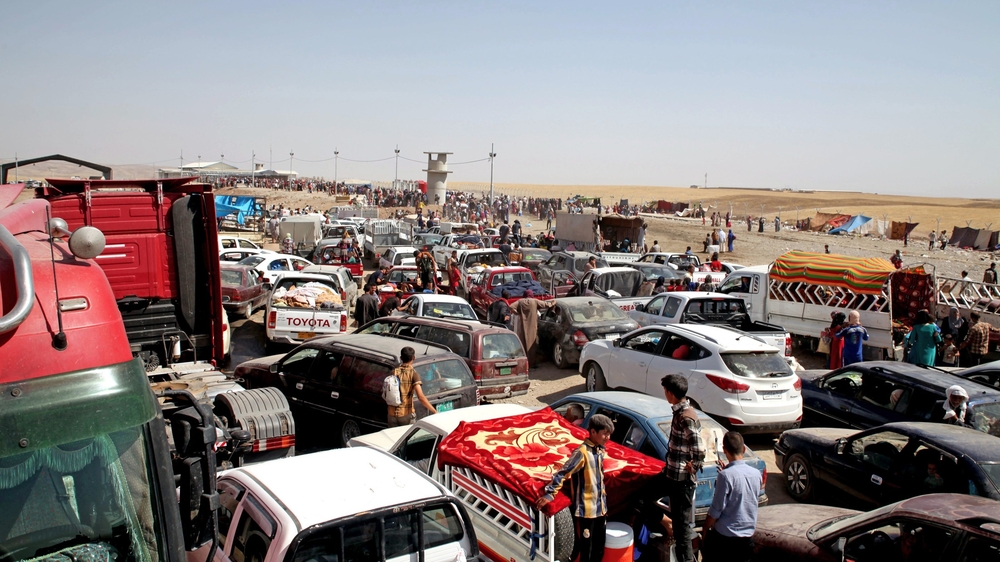 An Iraqi aid worker, Abu Khaled,* supporting Anbar IDPs through a local NGO, told IRIN: "These people are facing bitter conditions: they have been chased and harassed by militias, facing the threat of constant arrest and false accusations against them.

“They are being discriminated against on sectarian bases and no-one responds to them because they are Sunnis,” he claimed, complaining about the lack of outside support his organization had received from international aid agencies.

With the fighting in Anbar still ongoing and a military offensive to liberate Mosul in the planning, Beyani said it was likely the IDP numbers and the associated pressures on the government would continue to rise.

“The prospect of vast new displacement is very real and requires a level of preparedness that has been absent in the past,” he said.

And he added that the ongoing shortfall in funds for the response, which is putting emergency programming under threat, was “a shame on both the Government of Iraq and the international community”.