International aid is beginning to flow into earthquake-hit Nepal, but much more is needed as the scale of the disaster becomes clear and the list of challenges grows.

Close to seven million people have been affected by the 7.8-magnitude quake that struck on Saturday. “Three million of them are children, all affected within the space of one day,” said Jean-Jacques Simon, chief of regional communications for the UN Children’s Fund, UNICEF.

“There is an urgent need for temporary shelter in the 16 displacement camps in the Kathmandu valley, and the many more around the region,” said Simon. In hardest-hit areas, 50 percent of homes and buildings are thought to have been destroyed.

Shawsat Saraf, Asia operations director for Action Against Hunger (ACF), expects both the "nature and scale" of the disaster to change in the coming days as emergency crews reach the remote villages in districts near the epicentre of the earthquake.

"I fear that the death toll will rise dramatically, as will the scale of the destruction," he told IRIN.

Fear forcing many to sleep in the open

In the many camps that have been established for those whose homes have collapsed or who are simply too scared to return, clean water and better sanitation is a key concern.  Cholera is endemic in Nepal. Medical supplies and personnel are also urgently required, International Medical Corps said in a statement over the weekend.

UNICEF has supplied the health ministry with 15 large tents, which are mainly being put up in hospital grounds.

“There are so many injured people, and not enough space, so people are parked outside. People are also too afraid to be inside [the hospitals] because of the tremors,” said Simon.

“From what I saw yesterday, there is clearly a lack of medicines, and the morgue is very full,” he added.

Poor communications are hampering the government and aid agency efforts to assess the damage caused by the quake. Districts closest to the epicentre - Gorkha, Makwanpur and Lamjung - are still proving almost impossible to access.

Men run past a collapsed building in Basantapur in central Kathmandu during an aftershock on 25 April 2015. Nepal was struck by a 7.8 earthquake that destroyed historic buildings and crucial infrastructure. 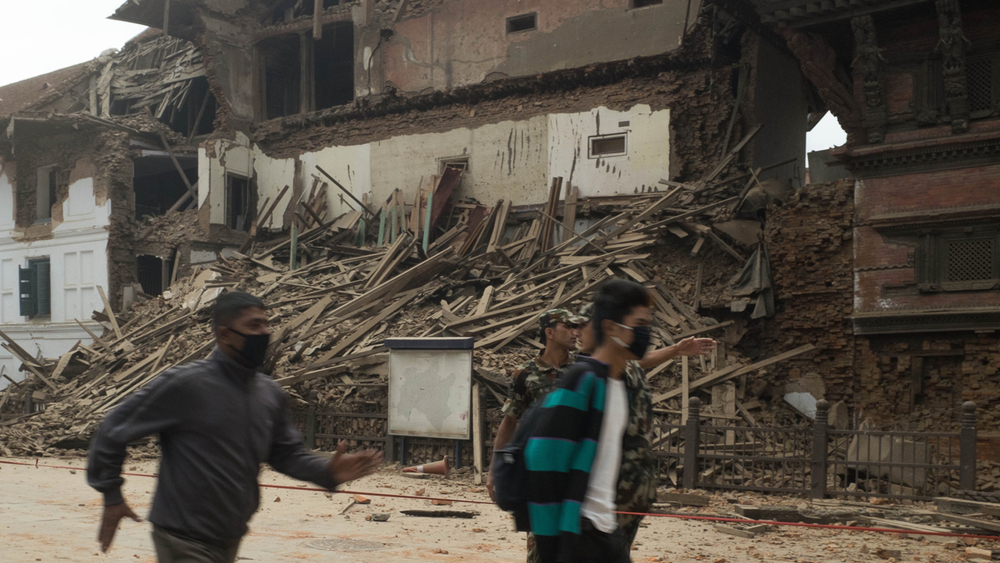 “Our teams are just going to the villages and towns outside Kathmandu today. It’s a very difficult job. There are landslide fears, and it’s drizzling now, so the weather is not helping,” Devendra Singh Tak, Country Director of Save the Children India, told IRIN.

“But the government has given clear instructions to start distributing… so the challenge for NGOs is to find solutions and get out there,” Tak added.

Several roads have been damaged and others leading from Kathmandu are clogged with people trying to flee the city. “These are narrow winding mountain roads which are already hard to access in normal times,” said Mike Noyes, Head of Emergencies, at Action Aid. “Getting roads cleared and open as quickly as possible is going to be the key to saving lives over the coming days,” he said.

For UNICEF, the priorities are “health, WASH [water and sanitation], family reunification, and then we get into the protection issues for children,” said Simon.  In the short term UNICEF is worried about supplies of diesel needed to run generators. Save the Children is struggling to find warehouse space for the surge of aid that will be required.

Saraf, a former Nepal country director for ACF, foresaw significant problems ahead as the attention moves from Kathmandu to the rural districts.

Kathmandu’s small international airport is struggling to cope with the flow of relief supplies, aid workers and journalists arriving and residents trying to escape. Prone to congestion at the best of times, there are now major delays.

“There is complete chaos at the airport right now,” said Tak. “It’s unable to cope with the scale of the problem.”

Flying in from Delhi, normally a 1.5-hour flight, took Tak 11 hours from departure lounge to the arrival hall in Tribhuvan International Airport, including two hours circling Kathmandu waiting to land.

Along with physical relief items, more people are required to help ease the burden on local teams, said Tak.

“We at Save the Children have a large [local] team - but everyone has a personal crisis to deal with first.”

ACF's Saraf said his organisation had drawn lessons from similar responses in Haiti and elsewhere.

"The need for drinking water, water purification, sanitation emergency latrines and hygiene kits will be quite critical," he said.

"The second area we will focus on is psycho-social support to the affected population, particularly children, and creating child-friendly spaces in the affected areas. The third area would be food and non-food items support: clothing, blankets because of the weather changing.

"The rains will be there. It gets cold in the night in the mountains," he added, completing a grim outline of the challenges in the days ahead.