A new global plan to prepare for future natural and climate-linked disasters agreed in Sendai, Japan today has been condemned by development NGOs as lacking in ambition and short-changing poorer countries that are most at risk.

The World Conference on Disaster Risk Reduction agreed a framework for the next 15 years that outlines seven global targets, including a “substantial reduction in global disaster mortality, a substantial reduction in numbers of affected people and a reduction in economic losses in relation to global [Gross Domestic Product]”. It however avoided numerical targets and lacks the concrete financial commitments that activists had hoped for.

“The world’s poorest people, who are most vulnerable to natural disasters, have again been let down by governments,” the NGO Oxfam said in a statement. “Negotiators in Sendai were supposed to agree on a much needed bold new plan to build countries’ resilience to events like Cyclone Pam that has just devastated Vanuatu, one of our least developed nations. Instead what was adopted is a set of half-measures that will not keep pace with rapidly rising disaster risk around the world.”

While welcoming the agreement’s emphasis on women, children, the elderly and people with disabilities, “who are particularly vulnerable to disasters”, Oxfam warned that the “international community’s inability to make concrete commitments to finance disaster risk reduction threatens to undercut its ambitious anti-poverty agenda – and puts added pressure on governments to take bold action at more high-profile international conferences on the Sustainable Development Goals and an ambitious new global climate change agreement later this year”.

The five-day Sendai meeting, convened by the UN Office for Disaster Risk Reduction (UNISDR) and attended by 187 government representatives, was to set the stage for those two upcoming global conferences. “They are interlinked - this was the chance to get off on the right foot,” Scott Paul, Oxfam’s senior humanitarian policy advisor, told IRIN. “Our view was that targets were a litmus test, as they create a hook for meaningful accountability by governments.”

While anti-poverty campaigners are disappointed with the outcome of Sendai, it has catapulted the concept of Disaster Risk Reduction (DRR) up the list of current big ideas of the global aid enterprise. So IRIN is providing a closer look at what it means, in case you missed the memo.

DRR is not new - it emerged in the late 1970s as understanding deepened on the causes of disaster, and techniques to mitigate risk. DRR aims to reduce the damage caused by natural hazards through prevention, preparedness and mitigation; and to link humanitarian response to sustainable development. Climate change and thinking around resilience gave DRR fresh impetus, enshrined in the decade-long Hyogo Framework for Action, which Sendai supersedes.

DRR is “a way of thinking, it’s an important agenda, but it’s not a good analytical tool,” Simon Levine of the UK-based think tank the Overseas Development Institute (ODI) told IRIN. “What events in Sendai and the Hyogo process have to do with the real world I’m not sure. At the same time, we say we want better innovation, better entrepreneurs – [but that means taking risks so in a sense] it is a competing agenda."

Sold as a cost-saving

The logic of DRR is often reduced to a dollars-and-cents calculation. The numbers of disasters are increasing worldwide, as is the cost of tackling them. If prevention can significantly reduce that price tag, and since development assistance is slowing, it makes sense to invest in damage limitation.

Prudent as that may seem, spending on DRR remains a small fraction of total aid financing: in 2010 peacekeeping missions gulped $9.5 billion compared to DRR’s $1.1 billion. Short-term expediency that suggests spending is wasted if disaster doesn’t strike (or gambling that it won’t and not spending at all) is flawed, according to the Global Facility for Disaster Reduction and Recovery, a World-Bank managed global partnership to help developing countries reduce their vulnerabilities to natural hazards. Investing in more resilient infrastructure does have a cost, but also has a development dividend, even in the absence of a disaster. And while it may be difficult to prove the life-saving impact of DRR, the reduction in cyclone deaths in Bangladesh over the last few decades does seem to point to the success of a programme to build shelters, improve forecasting and early warning – an unquantifiable good.

Who gets DRR financing?

The largest recipients – China, Indonesia and Bangladesh – have the highest mortality risk index (MRI), a gauge developed by UNISDR that models natural hazards. But the MRI excludes the risk of drought, which particularly impacts least developed countries. ODI points out that drought-prone Somalia, Eritrea and Djibouti receive only tiny amounts of DRR financing.

Several pots are available: domestic funds or international loans, typically to support early warning and preparedness actions; public-private partnerships for infrastructure; and insurance through a range of instruments including bond markets and sovereign pooled funds. But these mechanisms are complex and difficult to track, says ODI. Oxfam’s Paul acknowledges financing is available for DRR, but “it’s insufficient and already failing to keep pace with the current rate of disaster risk in the world, let alone the future rising tide”.

A displaced mother and child on the outskirts of Herat fled several months ago from Ghor province where rain fed crop harvests collapsed due to drought. 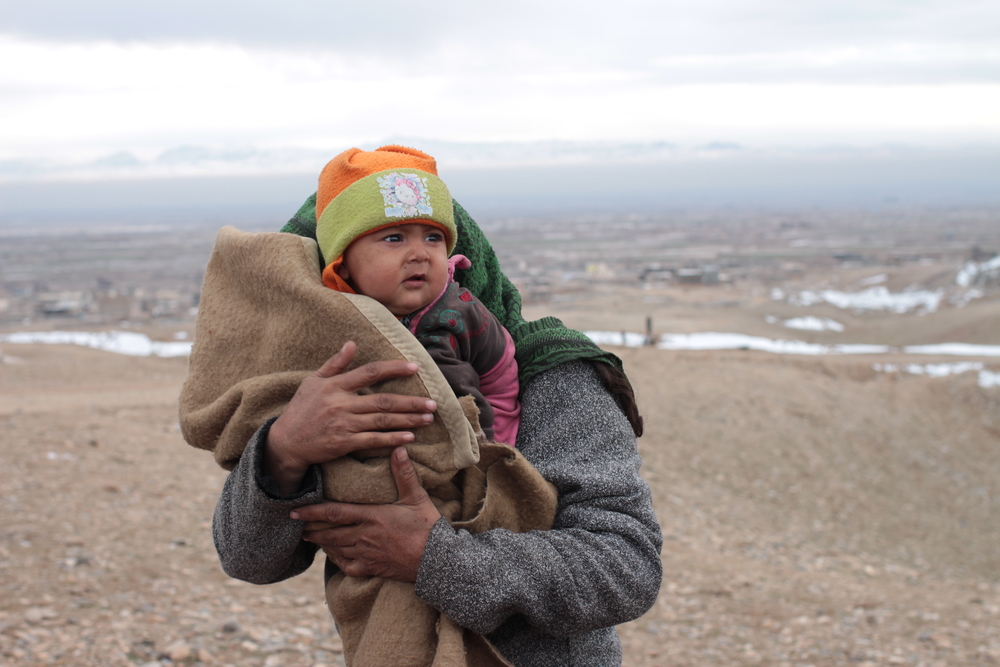 According to Levine, rather that a new “DRR fund”, risk management should be about “an entrenched way of thinking” around how “systems and responses work – and that rarely starts with a focus on budgets”. In the real world, DRR takes place “in conversations among people – friends, families, partners [about business decisions or home improvements] - that’s where DRR happens. Sometimes you just need incentives from government or the private sector.”

DRR literature draws a clear link between poverty, vulnerability and risk. But “disasters for vulnerable people are often the consequences of longer-term negative pasts”, where the powerful wield control to maintain an advantageous status quo, argue James Lewis and Ilan Kelman at Bradford University’s Disaster Research Unit. If the political and social origins of disasters are ignored, can they really be reduced, they ask.

“Crises provide easy cover for the powerful to advance their own private interests and political agendas,” wrote Levine in a paper on The relevance of ‘resilience’?

And are humanitarians best-placed to understand these local political economies?

The traditional model of disaster risk management is top-down “command and control”, based on the assumption that only through firm organisation and coordination can resources be efficiently and effectively deployed. The authorities hold the skills, knowledge and capacity to deliver emergency management services to dependent citizens. Communication is one-way - to transfer information and knowledge from the experts to the people. Essentially the public must trust the authorities’ judgement and follow their advice closely.

But people have a complicated relationship with perceptions of risk, and most definitely with their elected officials. The widening band of civil society activists and growing multiculturalism and urbanisation challenges the top-down model. People want accountability and seemingly a greater say in decisions that affect them. Social media provides the tools that can facilitate information transparency and alternative grassroots action, with the crowdsourcing Ushahidi network being the most commonly cited example.

People-centred approaches dilute the role of the authorities and share the burden of risk management and response. “But it is not entirely clear whether private actors want to be more involved, or whether they are ready to take over more responsibility,” a recent article in the International Journal of Disaster Risk Reduction noted. The authors point out the more decentralised model requires the right conditions, with adequate financial resources and power devolved to the local level, within a political climate that relinquishes “responsibility to citizens”.