A spate of kidnappings in the Central African Republic illustrates the continuing levels of insecurity and instability in the country as it strives to turn the page on almost two years of extreme political violence.

Over the space of a single week in January, 15 people, including a government minister, were kidnapped. Earlier in the month, a local priest, a French aid worker and a UN employee were abducted in the capital, Bangui. While the last three were quickly released, the minister, Armel Ningatoloum Sayo, a former rebel commander, remains in captivity.

Sayo, who serves as minister of sports and youth in the current interim government, was kidnapped on 24 January as he came out of a church in the capital, Bangui.

That same day in the northern town of Kaga-Bandoro, a team conducting public consultations ahead of a national peace and reconciliation forum due to start this month in Bangui were kidnapped. Those taken included the regional prefect, one of his deputies, and the town’s mayor. They were held for a day before being released.

Then on the night of 2 February, a pastor, his wife and four other residents of a village in the north of the country were abducted. A day later, the pastor was still being held captive, while the others were freed.

Authorities have attributed these incidents to the two groups of combatants which dominated the CAR conflict: rebels known as Seleka, who were ousted from government in December 2013 10 months after seizing power, and the anti-balaka, a loose grouping opposed the Seleka. Human rights groups have accused both groups of widespread atrocities.

In Kaga-Bandoro, a Seleka spokesman openly admitted his group had taken the 8 members of the consultation team, whose vehicle and other equipment remains in the hands of the abductors.

The Bangui kidnappings have been widely linked to fighters loyal to a notorious anti-balaka commander, Rodrigue Ngaibona, aka General Andjilo, who is currently on trial for an array of crimes including murder, possession of weapons of war, associating with criminals, rape and looting.

The group which abducted the French aid worker and the priest initially demanded Andjilo’s released from custody, but this was refused. They then asked negotiators – led by Bangui’s archbishop, Monsignor Diuedonné Nzapalainga – for cash.

“Among other demands, the abductors demanded financial assistance, that is to say, money,” the archbishop said.

“But I told them that we priests had no money to give.”

Unconfirmed reports from sources within the anti-balaka said the French government did pay for the release of the captives.

Some four million CFA francs (US$7,000) were demanded for Sayo’s release, politician and former anti-balaka member Sebastian Wenezoui told a recent press conference, explaining that he had been in contact with the abductors.

The Kaga-Bandoro abductions suggest politics is also a factor in some of the recent kidnappings, and that in the run up to the national dialogue, some groups are keen to assert their control over certain areas of the country so as not be left out of any power-sharing arrangements.

“The high command of the Seleka based in Kaga-Bandoro is opposed to any government mission in areas under our control,” said local Seleka spokesman Maouloud Moktar.

“For us, any collaboration with the authorities in Bangui is henceforth defined according to the resolutions that emerged from the talks in Nairobi,” he added.

This was a reference to discussions in the Kenyan capital in December and January between an anti-balaka splinter led by Francois Bozizé, the president ousted by Seleka in 2013; and a group headed by former Seleka leader Michel Djotodia, who succeeded Bozizé as head of state between March 2013 and January 2014. 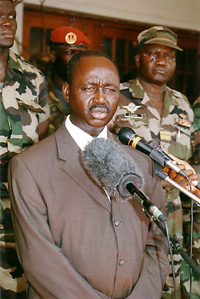 The resolutions of these meetings, notably that another transition period be established in CAR, and that an amnesty be granted to all involved in the conflict, were dismissed by the current government and the internationally-backed chief mediator of the CAR crisis, Denis Sassou Ngesso.

“Although it is unlikely to have an immediate impact, this deal highlights the scale of the challenge facing [President Catherine] Samba Panza's government as it seeks to organise its own peace and reconciliation forum in the CAR capital,” the Economist Intelligence Unit said in an emailed analysis.

“Indeed, it seems unlikely that the signatories of the Nairobi agreement will participate constructively in the Bangui forum. In turn, this could undermine the effectiveness of any agreement reached in Bangui. More generally, the agitation for amnesty for former combatants could prove a further sticking point in negotiations, precipitating a slide back into militancy,” it said.

After Sayo was kidnapped, Public Security Minister Nicaise Karnou said of his abductors: “This group of terrorists is being agitated from Nairobi with the intention of sabotaging the process of restoring peace.”

This view was even echoed by leaders of the main wing of anti-balaka, which has been transformed into the Central African Party for Unity and Development (PCUD), whose chairman, Patrice Ngaissona, blamed the kidnappings on “a small group of anti-balaka manipulated” from the Kenyan capital.

"The PCUD disassociates itself totally from this small group,” he was quoted as saying in a party statement.

Meanwhile, citizens of Bangui, already traumatized by the ferocity of the past two years of violence, are venting their frustration.

“If it is VIPs who are being captured, we can honestly say that insecurity in the Central African Republic has gone beyond the level of red alert,” wrote lawyer and prominent blogger Augustin Doui.

“The kidnappings could have been averted if the transition authorities had disarmed the negative forces,” he added.

“If aid workers, priests and a government minister can be kidnapped in broad daylight it means no one is safe from this insecurity. What will become of ordinary people like us?” wondered a market trader in the capital.

The most senior UN official in CAR, Humanitarian Coordinator Claire Bourgeois, said that although aid workers had been advised not to go out after 7pm, there was no question of restricting humanitarian activities. Instead, she said there was a need “to strengthen security measures.”

Bourgeois pointed out that since January 2014, 18 humanitarian workers had been killed in CAR.