When Mohammed and Minara Ali ran from their burning home in Sittwe, capital of Myanmar’s Rakhine State, nearly two years ago, they had no idea where they were going or how they would get there.

“To save our lives, we ran away,” said Mohammed. “The military were shooting at us; my father was killed by the shooting and until now, I don't know what happened to my two younger brothers.”

Mohammed, 35, and his wife, Minara, 26, are Rohingya - an ethnic, Muslim minority group who have faced decades of persecution and discrimination in Myanmar. Burmese law does not recognize them as citizens, hampering their access to healthcare, education and employment.

The Alis joined thousands of Rohingya who were fleeing riots that had erupted between the majority Rakhine Buddhist population and local Rohingya residents in June 2012. They boarded a crowded boat and used Minara’s wedding ring to pay for their passage. After many days at sea, they reached Malaysia where Mohammed found work labouring in paddy fields. However, local police regularly stopped him and confiscated his meagre salary and after six months during which the Alis’ asylum application remained undecided, survival had become almost impossible. They decided to sell what was left of Minara’s wedding jewellery to pay a smuggler to organize their passage to Australia from Indonesia.

“After two days, the [boat’s] engine broke down and we were floating at sea for three days,” recalled Mohammed. “Then we came to an island, but there was no food there, only monkeys, so someone phoned the police to come and rescue us.”

They spent the next year in detention in Jakarta - five months in separate cells at the city's immigration headquarters and the remaining time at an immigration detention centre where they were able to apply for asylum.

"We suffered a lot in detention," said Mohammed. "There were many mosquitoes and it was dirty and, in the first place, we weren't allowed to talk to UNHCR [the UN Refugee Agency] or IOM [International Organization for Migration]."

After being granted refugee status two months ago, they were moved to accommodation managed by IOM in Makassar, a bustling city on the southwest coast of Indonesia's Sulawesi Island. IOM also provides them with a small monthly stipend to buy food and basic necessities. "We're free here, but we always have tension, thinking about my mother and other siblings [in Myanmar]," said Mohammed. "From here, we can't assist them."

Refugees are barred from working in Indonesia and even if they had any jewellery left to sell to pay a smuggler, “there’s no way now to go to Australia by boat,” said Abdul Ghani, 23, another Rohingya refugee staying in the same building in Makassar.

Over the last six months, Australia’s military-led operation to prevent boats carrying asylum seekers from reaching its shores has been extremely effective, even if its practice of towing boats already in Australian waters back towards Indonesia has been criticized by UNHCR as in breach of the Refugee Convention. Smugglers and their clients have now largely abandoned attempts to reach Australia by sea.

The Alis spend their days waiting for UNHCR to come with "good news". Good news would mean resettlement to a country where they could live without fear and earn a living, but their wait is likely to be a long one.

Mohammed and Minara Ali are Rohingya refugees from Myanmar’s Rakhine State. After a failed to attempt to reach Australia by boat, they spent a year in detention in Jakarta 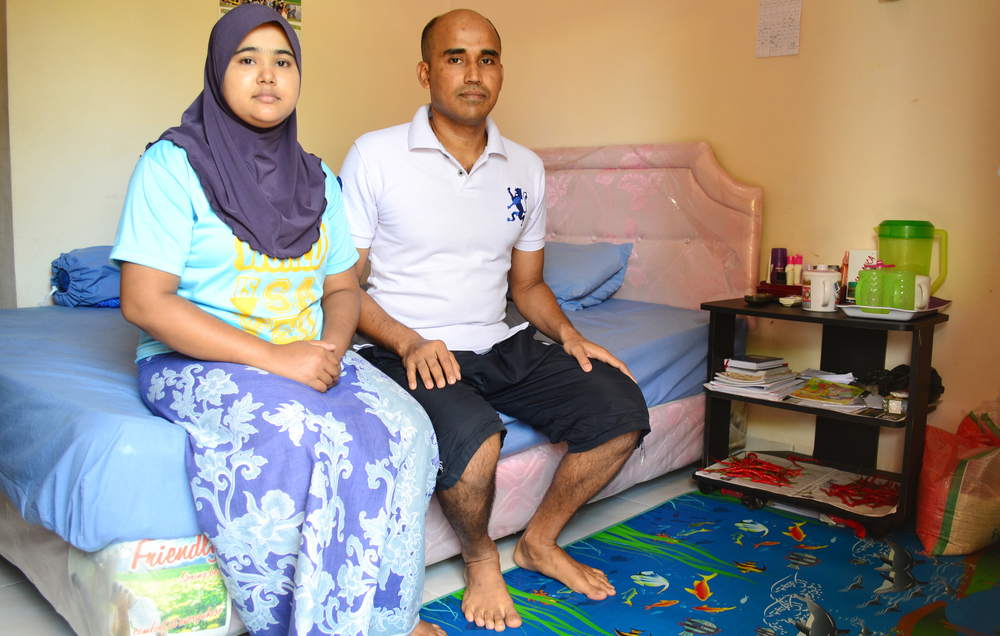 For refugees living in desperate circumstances around the world, resettlement is often the hope that sustains them. However, for the vast majority, it remains a distant hope with less than 1 in 10 of the 700,000 refugees globally that UNHCR estimates to be in need of resettlement departing for resettlement countries in an average year.

For refugees in Indonesia, the odds are slightly better with nearly 900 refugees out of about 3,300 who were eligible departing for resettlement in 2013. However, none of them were Rohingya refugees from Myanmar.

“Why is it that other nationalities get resettlement and not Rohingya? This is my very important question,” said Ghani. Other Rohingya refugees that IRIN interviewed in Makassar repeated the same question.

According to UNHCR, refugees from Myanmar have been major beneficiaries of resettlement programmes in recent years. In 2012, they accounted for 22,000 of the nearly 75,000 cases that UNHCR submitted to resettlement countries for consideration. How many of those (refugees from Myanmar) were Rohingya is not recorded but a large number were non-Rohingya refugees living in camps along the Thai-Myanmar border who were resettled to the USA through a group resettlement programme which ended in early 2014.

In the last year, over 1,000 asylum seekers from Myanmar have arrived in Indonesia. Anecdotal reports suggest the vast majority are Rohingya who, like the Alis, tired of waiting for refugee status in neighbouring Malaysia which is host to over 100,000 refugees and asylum seekers from Myanmar. Neither country is a signatory to the Refugee Convention, but refugee status determination by UNHCR is generally quicker in Indonesia and more care and support progammes for refugees are available, most of them provided by IOM with funding from the Australian government.

Although there are more informal work opportunities for refugees and asylum seekers in Malaysia, Ghani opted to come to Indonesia after five years working in restaurants and factories there while waiting for his asylum application to be processed. “In Malaysia I got money, but not enough for me, for my future, because I had no identity, no documents,” he told IRIN. “I applied for refugee status there, but after such a long time I gave up.”

In an emailed response to questions from IRIN, Vivian Tan, a regional spokesperson for UNHCR based in Bangkok, wrote: “Partly because of the limited scope of resettlement, we have to be very careful not to create false expectations or a ‘pull factor’ through resettlement.”

However, Steve Hamilton, deputy chief of mission for IOM in Indonesia said there was a need for UNHCR to provide greater public clarity concerning the current lack of resettlement of Rohingya refugees from Indonesia so that “other Rohingya don’t get false hopes and make the journey to Indonesia thinking they will be resettled.”

“UNHCR has been advocating with host governments for temporary protection for them… and access to basic services such as shelter, food, health care and education. Where possible, we are also urging governments to grant them the right to legal work so that they can support themselves while waiting for other options to open up,” she added.

Sarnata Reynolds, a senior human rights adviser at Refugees International pointed out that “resettlement has to be used carefully” to avoid playing into the Myanmar government’s “policy of exclusion” of the Rohingya. However, she disputed the suggestion that it could act as a pull factor. “Conditions in Myanmar [for the Rohingya] are so bad that they can’t survive there,” she told IRIN over the phone from Washington DC.

“I think over time there will have to be a regional response that’s more orchestrated and takes into account the fact that they’re not going anywhere,” she added.

Ghani is well aware that his future is likely to remain on hold for some time to come. “I can’t make a plan, I can only hope for a better life through resettlement,” he said. “UNHCR told me only to wait and I’m not considering going to back to Malaysia, but I don’t know how long I can wait. I’m always thinking about my family.”